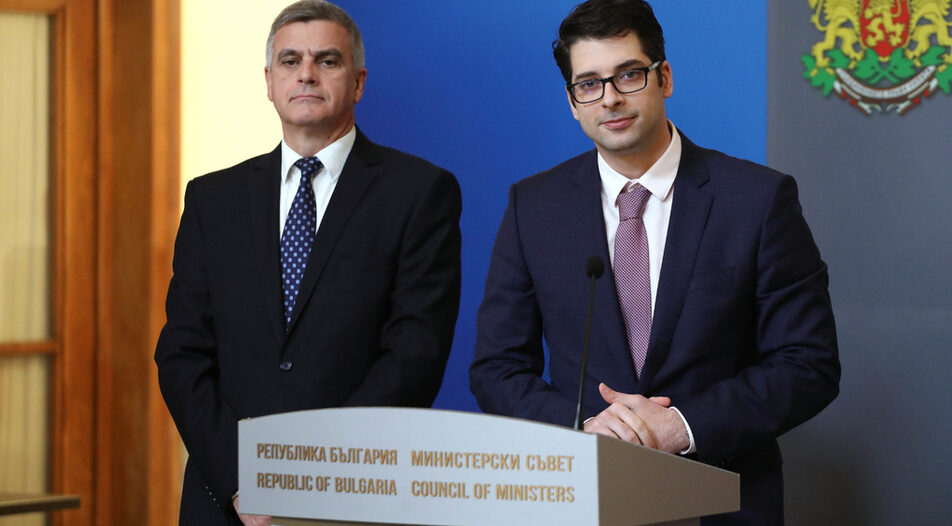 The week: Bulgaria finally has a Plan, A local bank has some secrets and Peevski is back (sort of)

The week: Bulgaria finally has a Plan, A local bank has some secrets and Peevski is back (sort of)

K Insights 15/10: It’s good to promise, but better to deliver; a rapper enters politics, Football people say "no" to change

After months of delay, Bulgaria has finally joined the rest of the EU in submitting its Recovery and resilience plan. It will arrive in Brussels today.

It's a comprehensive document: the Plan kept growing and growing to its current content of hundreds of pages and attachments. It will serve as the framework through which over 6 bln.euros will be invested over the next 5 years.

You would be forgiven to think that we've spent all this additional time (the plans were originally due in April) crafting the best possible plan. And you would, of course, be wrong. This is the real world, not Singapore.

Bulgaria has already spent six months without a regular government, and undergone two elections and will soon have a third (together with a presidential one). The two short-lived parliaments couldn't even reach consensus on updating the budget, let alone dealing with a detailed plan for investments, covering plenty of sectors.

So in the end, the caretaker government abandoned the waiting game and just sent the plan to Brussels on its own (on the picture - the prime minister Stefan Yanev and his deputy Atanas Pekanov).

This means it had to deal with two thorny issues, which the Commission wanted settled: justice reform and closing coal plants.

On the first, admittedly, there was not much any government could do, much less a caretaker one. So a list of promises was probably the best they could offer.

On the second however, there isn't any room for maneuvers. Bulgaria is the last member-state not to have fixed a provisional date for ceasing coal burning. The previous government pretended such an issue didn't even exist, so now the onus is on the caretaker government to bite the bullet. In the plan it proposes either 2038 or 2040 as the date to be coal-free.

Make no mistake. There will be protests, political gimmicks, empty promises and grandstanding in the election campaign. Yet the simple truth is that living in the EU with a coal plant will be well-nigh impossible in the next decade. To put it bluntly, even if we stipulate 3000 as the year we are going to close the Maritza-Iztok complex, once the carbon quotes reach, say, 100 euro per tonne, the coal industry is dead and buried.

So the next several years are best spent preparing for the inevitable transition to the future, instead of arguing how to save the past. Kudos to Stefan Yanev's government for admitting this. How are we going to go about that, is a matter for a new government.

As is the justice reform. Whole rooms can be filled with the lists of promises we've sent to Brussels over the past decade. It took US sanctions for the EC to notice those promises are empty. It will take a lot more for the prosecution service to notice it. Whether this time is any different, will depend not on the Plan, but on the elections.

Speaking of which: election heats up

A brutal race is on for second place in the upcoming National Assembly elections. This is the salient conclusion from Exacta Agency sociologists, who published one of the first studies on voting intentions exactly one month before election day. The number one place of Boyko Borissov's GERB party remains undisputed by all pollsters so far, but the battle for Silver could be well, legendary!

According to Exacta, three parties - We Continue the Change of popular caretaker ministers Kiril Petkov and Assen Vassilev (read more about the newest fraction here if you missed it), Slavi Trifonov's waning TISP, and BSP, are all projected to end up in the 15-15.5 percent spectrum. Democratic Bulgaria (DemBG), which will likely be somewhat hard hit by the newest political project, would remain fifth at 10.2 percent, followed by MRF with 9.4.

The Presidential one - not so much

As for the Head of State election, the heat has mostly turned to steam. According to a Tuesday Alpha Research poll, incumbent Rumen Radev leads convincingly with over 42.6 percent of the vote followed by the GERB candidate Prof Anastas Gerdjikov (28.1 percent) and DemBG's nomination Lozan Panov (8.2 percent).

While it is likely that the Presidential vote will go to a second round, so far the contenders for Mr Radev's post have been quite unconvincing.

One might have had high hopes for change, clearing a muddy field of corruption, and a new start with a fresh new face. Yet the revolution crashed and burned under the fire of the status quo.

No, it's not politics we're talking about. It's football.

The Bulgarian Football Union (BFU) congress was supposed to choose between the incumbent Borislav Mihaylov, symbolizing everything that is broken in the sport lately, and newcomer Dimitar Berbatov. After behind-the-scenes dealmaking and a ton of scandals, with the convenient help of familiar political faces (like the eternal mayor of Simitly, who merits a special article in the future), Mihaylov managed to fend off the challenge and win by 241 to 230 votes.

Mr Berbatov, who made a serious bid to reform the stagnant Bulgarian football scene, is not backing down, however. He said the result reflected an abuse of the quorum rules by the incumbent president and added that he will take the decision to court.

Earlier this week, the website bird.bg released information about Borislav Mihaylov, who tried to convince UEFA to pay exorbitant sums for a bus and a training base for the Bulgarian national team and allow offshore companies, as well as a construction firm linked to mogul Delyan Peevski, to take part in the procurements.

Apparently Mr Mihaylov couldn't be bothered to comment on these allegations.

Yet more secrets from the Pandora Papers

Speaking about Bird.bg - the Bulgarian partner of Pandora investigation - more and more Bulgarian names started popping up from the Papers. The most striking finding was that Tseko Minev and Ivaylo Mutafchiev, owners of the largest Bulgarian-owned bank, First Investment Bank - have issued credits to offshore firms controlled by them.

The bank, speaking to Capital, rejected claims that the two are the "end owners" of the offshore firms. The documents (and lots of Capital's investigations) clearly show otherwise.

After days of protest and angry calls for the resignation of the infrastructure minister Violeta Komitova, road-working companies suddenly ended their protest. Komitova will find some money to pay for the work being done, but a lot of the contracts, signed by the previous government, will be void. Since that was a bad practice anyway, the construction companies seem to at least understand that times are slowly changing.

Yet more government help for COVID

Since Sofia and other cities are now hard-hit by COVID, the government has opened up new lines of financial aid to businesses affected by restrictive measures. Anyone who sees a 40% or more fall in monthly revenue, compared to 2019, can apply.

This is the export growth in goods in August. It is now approaching 44 billion levs.

This is the economic growth projected for 2022 by the IMF. The fund expects Bulgaria to also register strong growth this year - 4.5%

The company, known for its copper products, gets a 20 million euro loan from the European Bank for Reconstruction and Development (EBRD). This will be invested in new production lines to satisfy growing demand from the automotive and renewable energy sectors.

The Bulgarian company gets a second American film award. Chaos is the winner of an Emmy for technological innovation in TV series. The company, founded by Petar Mitev and Vladimir Koylazov, won an Oscar for a similar innovation 4 years ago.

The trading company, which has over 100 bln euro revenue, and the CWP investment company will start building renewable energy plants in South-Eastern Europe. This means new wind and solar parks, as well as storage capacity in Bulgaria, Serbia, Romania and Ukraine.

There is a water problem with electricity

While everyone is feeling the squeeze with the current energy vortex, one unexpected crisis has emerged from the Bulgarian water sector. The water companies have complained they might go bankrupt. Their price is regulated and so they can't rely on higher revenue, but at the same time have to pay twice as much for energy. So no water for us then?

Well, no. As you can guess, the state can't allow that to happen. So, much like municipalities who can't go bankrupt, water companies will probably also get a financial boost from the state budget.

The highest-ranking Bulgarian politician in Brussels, former head of the Regional committee in the European parliament, runs for vice-president on the MRF party ticket. Last time Mihaylova featured in Bulgarian politics as minister of regional development - in 2013-2014, the EC stopped the funding and her party colleague Delyan Peevski was scheming his network of companies to syphon off the EU money.

Speaking of Peevski, he is also aiming to reenter politics. Tarnovo is the place from which he will do so. The Magnitsky-sanctioned giant of corruption is back on the list of his Turkish MRF party, vowing to "clear his name". MRF had one mandate from Tarnovo once, but they've lost it.

Words of the week:

This week, one of Bulgaria's most beloved rap singers - Hristo Petrov, known better as Itso Hazarta ("Itzo the Gamble") announced he is joining We Continue the Change and will run for MP not just anywhere, but in the Sofia 23rd Electoral District, where he will be facing ex-PM Boyko Borissov and BSP leader Kornelia Ninova.

Mr Petrov, who has declined to be part of many reformist parties and coalitions in the past, has always been critical of politicians and politics in general. His refrains contain phrases such as "I want to enter Parliament!/ Go! You will never ever have hemorrhoids."

In what is probably his most famous song this past decade, he sang: "I know a guy, if you get fined/ I know a guy, if your car gets towed," referring to the nepotism in Bulgaria that requires personal connections in high (and low) places to get ahead, or to simply get things done.

We've already had one pop-icon: Slavi Trifonov, burn out in the political stratosphere. Let us see if this critic of the system changes it - or it changes him.

After months of delay, Bulgaria has finally joined the rest of the EU in submitting its Recovery and resilience plan. It will arrive in Brussels today.