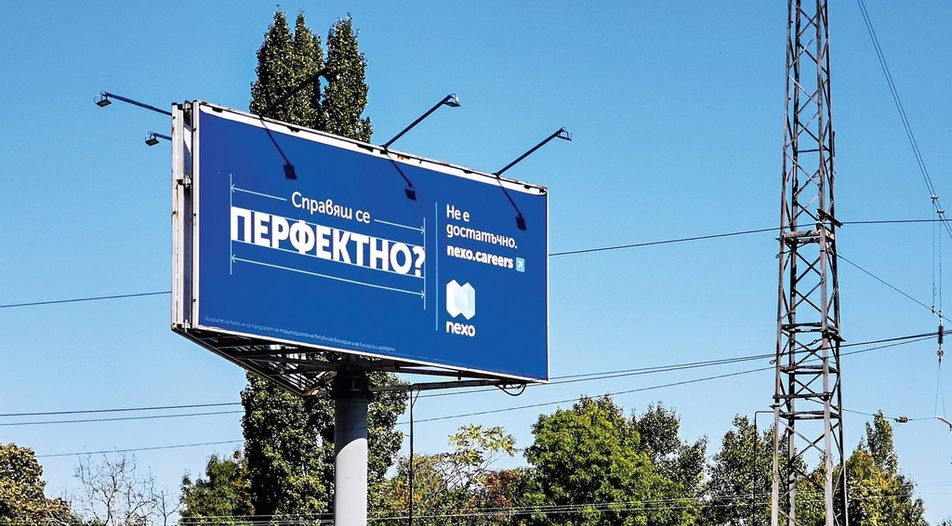 The Week: The biggest Bulgarian bank you’ve never heard of, Winter is coming, come and meet the government

The Week: The biggest Bulgarian bank you’ve never heard of, Winter is coming, come and meet the government

There is pleasure in the pathless woods,

there is rapture in the lonely shore,

there is society where none intrudes,

by the deep sea, and music in its roar

So wrote Lord Byron at the beginning of the 19th century, while contrasting romantic ideals with harsh reality. To some people today, the unknown lands of the cryptocurrencies are romantic: a pathless wood where no one intrudes indeed. To others, they are rather scary, for the same reason - because without rules there can be no safety.

And some, wise and cunning enough to overcome difficulties and navigate this deep sea, are reaping a financial windfall.

So meet Nexo - the biggest financial institution in Bulgaria. Yes, quite a statement I know. Most of you have probably never heard of Nexo. Yet, according to its own claims, the company which deals in crypto-backed loans manages roughly 10 billion dollars.

Or more. Or less.

Thing is, just like Alice in Wonderland, you can never be quite certain in this land what is up and what is down. Some claim Nexo is not entirely fair with its clients; others are happy with the money they're making. Estonia banned it, but Lithuania permits it.

You should definitely read the whole amazing story of Nexo by Capital's Yoan Zapryanov, how it became the multi million business it is now, who runs it, and why it is controversial.

And on the general topic of the crypto trade and the so-called Decentralized Finance (DeFi), keep in mind it is still a Wild Wild West out there: no one regulates it, no one looks after your money and you are the one responsible for everything.

There is pleasure to be found in the pathless woods, for sure, yet as Lord Byron suggested long ago, the harsh realities often trump the romantics.

You might have thought he disappeared, but businessman, media mogul and MRF MP Delyan Peevski appeared out of the blue this week. Yes, the same Peevski who has regularly "engaged in corruption, using influence peddling and bribes to protect himself from public scrutiny and exert control over key institutions and sectors in Bulgarian society", as the US Treasury Department wrote about him in June when it sanctioned him under the Global Magnistsky act.

He first popped up in the Pandora Papers - the latest journalistic investigation of the ICIJ consortium - with three previously unknown offshore companies on his name, Felina Trade & Investment Inc, Verum International Limited и IGWT Limited, all incorporated while he was still an MP in the 2017-2021 period. The problem is that Mr Peevski never declared this company in his annual disclosure form which he was supposed to file to the anti-corruption authorities.

This led to his second appearance - this time in person (see at the bottom of this newsletter). There you will also find the other interesting name from Pandora.

Since we are in the arena of international politics, let's examine the EU-Western Balkan Summit that took place in Slovenia - which currently holds the rotating Presidency of the EU - on Wednesday. Bulgaria finally formulated clear-cut prerequisite demands before it will consider lifting its unspoken veto on N. Macedonia's entry into the EU.

President Rumen Radev asked Skopje for several (6 to be precise) concessions. Of those, he named two: accept the "historic truth" about the two nations' shared past and take concrete measures to protect people who self-identify as Bulgarians in the country, thus mentioning them in the constitution.

N.Macedonian foreign minister Bujar Osmani was quick to agree, stating that with this, Bulgaria should give up the claim of "one nation, two states".

Even if this passes, don't count on fast-track to the EU

A protocol must be completed, then a Road map and this should be included in the negotiations framework, said Radev. None of this is actually happening quickly, and on top of this - even if Skopje agrees, the next EU country to hold the rotating Presidency is France, which currently suffers from "enlargement fatigue".

And if you want to enlighten yourself on what exactly Bulgaria wants - top diplomat Marin Raykov explains Sofia's position for Kapital Insights.

There are elections coming, we haven't forgotten (although we might want to, honestly)

If you missed Thursday's analysis of the political arena 1,5 months before the 2 in 1 vote in November, catch up with it here.

The reason: it was a volatile year, there is no government still and the budget needs to have buffers.

Speaking of the budget: no VAT hike for books and restaurants

At the beginning of the pandemic, the tax fell to 9% and was supposed to be "temporary". It also covers food deliveries and baby clothing, of all things. No reasoning or analysis has yet been presented by the Ministry of Finance for not revising this measure.

Is the rise in real estate prices in the first 9 months of 2021, compared to 2020 (which is not really a fair comparison at all, to be honest, given the pandemic, but if you live anywhere in Sofia or Plovdiv these days, you know what the property market looks like anyway). The figure comes from "Imoteka" - one of the largest real estate agencies on the market.

The World Bank's projected growth for the Bulgarian economy next year

Same period growth, projected by the Ministry of Finance

Inflation at the end of 2021, according to the ministry

The company has become the number 1 in the sector of machine production by revenue. It had topped 500 million levs, or 250 million euro in 2020, which is a whopping 60% jump on the previous year. Transferring some production from the Czech Republic, as well as from Smolyan, is part of the reason.

Three projects have applied for, and will receive support from, the Economy ministry. Teltec electronics will build a factory in Sofia for 14 mln.levs, PPS manufacturing will invest 4.7 mln.levs in nitrile gloves in Plovdiv, TTL will build a train repair base in Sofia for 4.4 mln.levs

The European Bank for Reconstruction and Development has signed an agreement to acquire a minority stake in Euroins Insurance Group (EIG), one of the largest independent non-life insurance groups in central, eastern and south-eastern Europe. The EBRD is investing €30 million through a capital increase, while Еurohold, the insurance group's parent company, is providing a further equity injection of up to €12 million.

The software giant's Bulgarian wing acquired an office building in Sofia for 50 million euro - the biggest deal on the market in the last 3 years. Park Lane Office center is in a newly developed area of Sofia, next to Paradise center mall and next to a subway. The building has been rented out to other companies also, and SAP Labs will keep some of those renters.

Tighten your belts, the winter is coming

And it is going to be one hell of a ride, if the energy market is any guide. While Europe swings wildly between high and lows in price levels, Bulgaria follows suit. This week electricity prices marked an absolute high at 361.26 levs per MwH which is three times above the level forecast by the regulator in July. This shows the market is out of control. The gas hub "Balkan" sells gas at 219.37 levs per MwH, compared to the regulated level of 94.54 levs.

Which means, of course, that from 1 January, heating and electricity will see a 30% rise.

The UN Special Representative for Iraq and Middle East and former defense and foreign minister in the first GERB government, was revealed in Pandora papers to own an offshore company. He told bird.bg, the Bulgarian partner in the ICIJ consortium, that he "forgot" about it, although it was created just days after he became the Representative in Iraq in 2013. And, as a consequence, never declared it.

The outgoing Supreme Court of Justice President is a candidate to become Head of State. Mr Panov is known as a rare voice of reform within the judiciary and his entry into the presidential competition will definitely invigorate it.

The new CEO of Billa-Bulgaria, comes from Spain and the large SuperSol group there, but he also has experience in the local market also, having run T-market in Bulgaria.

The 15th annual meeting between government and business will take place in Sofia. The main topics of the high-level event will be the energy prices crisis, as well as the opportunities arising from the EU Recovery plan. You can watch here or register to attend here.

The municipal hotel in the small Black Sea town is bound to become something like Hotel California for the crew of the ill-fated Vera Su ship. Nine sailors were accommodated there after being rescued from the sinking ship, stalled on the rocks near Kavarna. Yet some of them are to be charged over the incident and will probably stay a bit longer in the hotel, which has not been opened in the past 2 years.

This was the disparaging - but also somehow endearing nickname given to Delyan Peevski by the Bulgarian public when he became notorious in 2013. This originated in an interview with his girlfriend Tsvetelina Yaneva in which she revealed this was her nickname for him. The name stuck during the following year of street protests against his appointment as chief of the National Security Agency (DANS).

For many it symbolized the excess power he had attained at the time. Yet this now seems really outdated - not only because of the "Magnitsky" sanctions and Boyko Borissov's fall from power, but in light of Mr Peevski's appearance in public at the DANS HQ this week, where he boasted a much healthier-looking physique. Ironically, the main public discourse surrounding his public outing focused so much on his looks that the big question surrounding his failure to disclose his offshore holdings was all but ignored.

There is pleasure in the pathless woods,

there is rapture in the lonely shore,

there is society where none intrudes,

by the deep sea, and music in its roar

So wrote Lord Byron at the beginning of the 19th century, while contrasting romantic ideals with harsh reality. To some people today, the unknown lands of the cryptocurrencies are romantic: a pathless wood where no one intrudes indeed. To others, they are rather scary, for the same reason - because without rules there can be no safety.