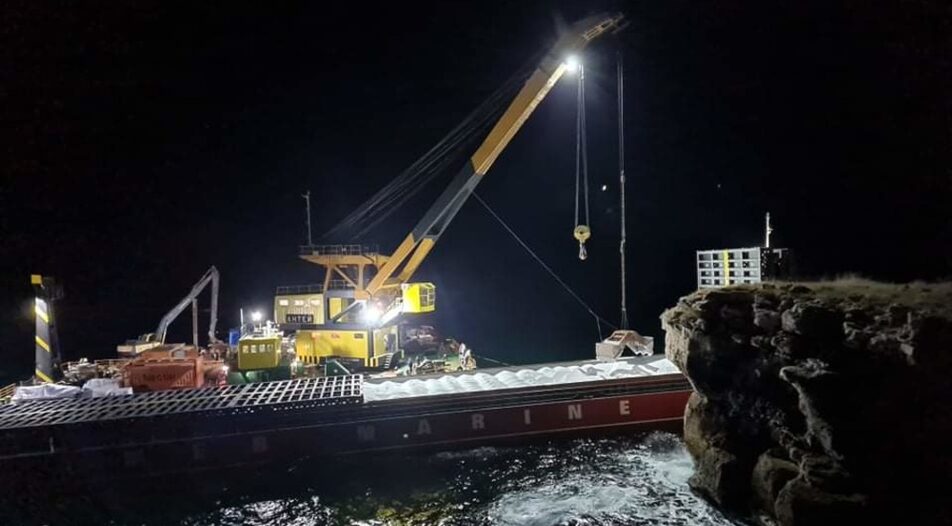 The Week: A shipwreck of a state, record low interest rates and how to find friends in Bulgaria

The Week: A shipwreck of a state, record low interest rates and how to find friends in Bulgaria

Forget Doing Business. No, not because the World Bank has stopped it (or because of the downfall of the Bulgarian associated with it - Kristalina Georgieva), but because it lacks a very important yardstick in determining how a country actually performs. We can call it various names - (in)ability to deal with a crisis, (in)competence of the administration to fulfill its duties - but it boils down to this: getting shit done.

For example, how able are you, as a country, to deal with a ship stranded on your precious shores? By that yardstick, Bulgaria, for example, fails miserably.

It is now ten days since The Turkish-owned, Ukrainian-operated Vera SU vessel drifted to the shallows near Kamen Bryag on the Black Sea. Initially, the authorities said they were waiting for the insurer to do something. Then, as it became obvious this would mean a long wait, they tied the ship to the rocks to prevent it tipping over. Then they tried unloading the Nitrate Fertilizer off the ship with totally unsuitable equipment and spilled some of it into the water, thus threatening a full-fledged environmental disaster.

We will wait for private companies (one of them involved in the salvage of the Russian submarine Kursk) to develop a plan to save the ship while not wrecking the environment.

Now, don't get me wrong. I'm not a proponent of an almighty state. China might be wonderfully equipped to deal with calamities, yet it certainly lags in other, important fields (such as human rights). It is perfectly understandable that the state doesn't have the capability to predict, or deal with, everything that happens. Yet to have 300 km of shore and lack even rudimentary preparedness for the possibility that a ship might crash into it, seems a bit ... careless? Delinquent?

It's easy to blame those directly involved, yet they have regularly filed (unheeded) reports to the Ministry of Transport. Now, of course, no one wants to take the blame.

To quote the (already fired) head of "Maritime administration" cap. Petrov, responding to a question from "Capital Weekly": "Out of all that you've seen in the waters near the ship, we own just the yellow speedboat and the telephone I'm using to talk to you."

Probably something to look into when we prepare the next Recovery and Resilience plan or other European funding, don't you think?

this week's newsletter is helped by

Finally, Radev has an opponent

The current head of state appeared to have so little competition before the next presidential election that pundits predicted a first round victory. GERB - the ex-ruling party and main opposition, has been frantically searching for a candidate. Noone wanted to face Radev until Prof. Anastas Gerdjikov, rector of Sofia University, apparently decided to run. Gerdjikov will be nominated by a committee, instead of a political party (the way Radev was), but will receive the backing of GERB, sources claim. As of Thursday afternoon, Mr Gerdjikov wasn't picking up his phone to journalists to confirm or deny the claim.

Gerdjikov was born in 1963 and has held a professorship in Classics since 2008. He studied at Sofia University and Humboldt University in Berlin, has served as deputy education minister (2001-2003), and head of the Scientific Research Fund (2008-2009) before becoming deputy rector of Bulgaria's largest university in 2010. He has held the rectorship since November 2017.

At least some movement. It's election time people, come on!

The announcement will definitely re-invigorate the stale pre-election campaign. It might also boost GERB which has already been shaken by the advent of the new "We continue the change" movement of ex-ministers Kiril Petkov and Assen Vassilev.

According to the latest poll by Gallup International - Balkan from Wednesday, the new party has become the second most preferred faction for respondents, just a week after its formation was announced. Gallup says it will likely win 15.2 percent of the vote, second behind GERB (21.4 percent of the vote). The big loser this time seems to be the big winner from the previous elections - Slavi Trifonov's TISP party, which polls in fourth place with 12.3 percent, barely above Democratic Bulgaria (12.1 percent) and just below BSP's 13.4 percent. MRF and Stand up Bulgaria are the other two factions that might enter parliament, making a total of seven according to the sociological agency.

Social minister Galab Donev announced that the caretaker government (which has run the economy and the state for quite some time now) is planning to raise the minimum wage from January. Labor unions are calling for 750 leva (375 euro), yet the government will aim a bit lower than that. At present, it is 650 leva.

The average mortgage rate in August, for loans in levs, was 2.7% which is the absolute lowest ever. It keeps going down, too - it was 3 percentage points higher in July.

Yet for some reason, the real estate sector is worried

Economic optimism in the real estate sector was lower in September, although only marginally. This is interesting, given that we're living through a huge real estate boom. Retail companies also feel worse this month about the business climate, according to data from the National Statistical Institute.

The company for edible cups opened a new factory in Plovdiv - its location since its creation. The capacity of the new installation is 2.5 million cups per month. The company is trying to enter new markets and spread its reach. It is currently operating at a loss - 619 thousand levs for 2020.

Another new factory in Plovdiv, for infrared optics. The investment is worth 7 million levs (3.5 million euro) and the plan is for 50 new employees. The company is working only for export and is owned by the family of Svetozar Georgiev - one of the founders of the software company Telerik (later bought by Progress).

The Singapore-based company is opening another office in Sofia, in NV Tower. The goal is to rent 6 floors from the impressive new building for the R&D center of the company. The center for cybersecurity and data storage already employs more than 500 specialists; the goal is to reach 1000.

This is the rise in the price of natural gas for the internal market from 1 October. This became evident at the last committee meeting of the Energy regulator. Bulgaria is desperately trying to avoid a catastrophic scenario of huge spikes in both gas and electricity prices, yet it is very hard to keep inflation under the lid with everything that's going on in Europe.

Late artist Christo's nephew and the driving force behind the wrapped Arc De Triomphe in Paris.

The last plenum of the Supreme Judicial Council (SJC), the high administrative body of the judiciary where nominations for the new President of the court can be made.

That's where you're supposed to be found by census workers who have until 10 October to count all of us. The deadline has been delayed because of failings in the online counting system.

a good place to find your new circle of friends if you have just arrived here. WORDS OF THE WEEK

This week the Ethical Committee of Sofia University found that Petar Iliev - lawyer and TISP nominee for Internal Minister (and rumors have it - for Prime Minister) - had indeed plagiarised from his colleague Nataliya Kisselova. About 80 pages of his 2015 book on Bulgarian parliamentarism were copy-pasted from Ms Kisselova's 2008 work on the same subject, grammar mistakes and typos included!

While it is nice that Mr Iliev's popularity has highlighted plagiarism problems in Bulgarian academia, a nice next step would be to acknowledge that it is a much more widespread issue that starts from high school and ends with the highest levels of professorship. Not coming any time soon, alas!

Forget Doing Business. No, not because the World Bank has stopped it (or because of the downfall of the Bulgarian associated with it - Kristalina Georgieva), but because it lacks a very important yardstick in determining how a country actually performs. We can call it various names - (in)ability to deal with a crisis, (in)competence of the administration to fulfill its duties - but it boils down to this: getting shit done.

For example, how able are you, as a country, to deal with a ship stranded on your precious shores? By that yardstick, Bulgaria, for example, fails miserably.