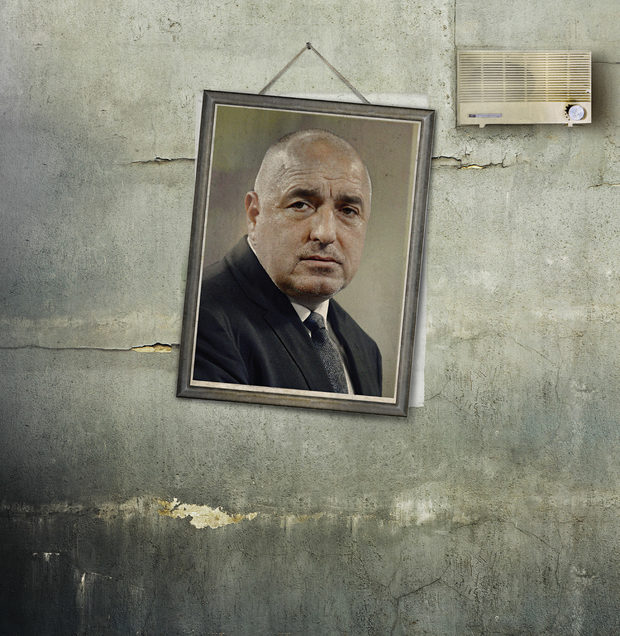 The lost decade of Bulgaria

The lost decade of Bulgaria

The governments of Boyko Borissov promised reform, but instead created an apparatus for extortion and clientelism

For the first time in more than a decade, there is a real chance that someone other than Boyko Borissov could rule Bulgaria. This will be a rupture: after more than 12 years in power, Borissov and his party GERB basically came to dominate every aspect of public or business life in the country.

While the acronym of former Prime Minister's party means Citizens for European Development of Bulgaria, its legacy after 12 years of political hegemony is anything but European.

Behind the facade of EU-funded construction projects constantly trumpeted by Mr Borissov for his own PR gains, an entire system of nepotism and clientelism became apparent. Besides building infrastructure of dubious quality, GERB's only other achievement was macroeconomic and fiscal stability.

In its first mandate (2009-2013), Mr Borissov killed all hopes for sweeping reform or a new direction for Bulgaria. During its second term (2014-2016), despite joining an unholy alliance with far-right nationalist parties, GERB still feigned pro-Euro-Atlanticism and moderation against growing international populism and xenophobia. In the light of Brexit and Donald Trump's election, and compared to Hungary and Poland, GERB's rule didn't seem that bad. It was not until the end of its third mandate (2017-2021) that deeply rooted problems started resurfacing regularly.

Meanwhile, Bulgaria remained the poorest, most unequal and most corrupt EU state. Instead of catching up with neighboring Romania (which started at a lower baseline at the time both entered the union in 2007) it began lagging further behind. Bulgaria is also at the bottom of media freedom and democracy ratings in Europe, yet behind the statistics lie a series of even more shocking public scandals, any of which would have brought down other EU governments.

A sum worse than its parts

Although these transgressions are invariably depicted as corruption practices, abuses of power or misappropriations of public funds, the whole picture is even worse than the sum of its parts. GERB ushered in such levels of anti-institutionalism and centralization of power that Bulgaria today is worse off in terms of the rule of law, the free market economy and democracy than in 2009. Mr Borissov's legacy is not that of reform but rather of establishing a repressive apparatus capable of pressuring businesses and political opponents on demand.

Here are just a few examples of GERB's (mis)governance over the past decade and why, historically, it will be seen as an era of lost opportunities and stagnation.

Seven years ago, a run on the third largest bank in Bulgaria - Corporate Commercial Bank (Corpbank) brought it down at an estimated cost of 3 billion euros to the Bulgarian taxpayer. The bank's liquidators have barely managed to retrieve 0,5 billion euro, so most of the bank's liabilities had to be covered by the State Deposit Insurance Fund.

Judicial proceedings against the culprits - those who allowed Corpbank's bankruptcy - have got nowhere. Tsvetan Vassilev, the bank CEO, is exiled in Serbia and has no plans to return. His former business partner Delyan Peevsk, from MRF, does not even figure in the court case and, so far, no high-ranking Bulgarian financial and banking regulators have received an effective sentence for their (lack of) action. At the same time, the prosecutor who investigated the bank's shutdown - Ivan Geshev - was promoted to head of the State Prosecution.

Even moguls seemingly close to the state apparatus can suffer, as the story of gambling boss Vassil "the Skull" Bozhkov shows. After the state allowed Mr Bozhkov to write his own legislation, liberalizing the gambling sector, and appointing members of the watchdog that was supposed to control it, in late 2019 he fell victim to his own success.

As his company, "National Lottery'' became the largest player in the billion-euro sector, appetites to capitalize - or rather cannibalize - on its success grew. The loopholes that Mr Bozhkov negotiated with GERB, whereby he pays less tax, suddenly became tax avoidance schemes that, according to State Prosecution, had deprived the budget of 350 million euro.

According to the mogul's account, in return for the preferential tax treatment, he was "forced" into direct advertising with government-friendly media and paying bribes - in cash - directly to ex-Finance Minister Vladislav Goranov. While no one in this saga is innocent, and Mr Bozhkov willingly participated in this scheme for five years, GERB members at least facilitated, if not instigated, the scheme.

The "National Lottery" story set a dangerous precedent: a large business had effectively been confiscated via a swift and unplanned nationalization of an entire sector. At the same time, the state has so far failed to prove in court that the exiled gambling mogul had evaded tax, so taking away his company's licenses was deemed illegal. This brazenness sent a clear message to businesspeople - both domestic and international - and it is far from the only one.

Other business people targeted by the state were the Bobokovi brothers, owners of the battery company Monbat and the motor and industrial oils firm Prista Oil. Over the past year, they were investigated for illegally importing dangerous waste for recycling from Italy, but they maintain that this is in fact an attempt by the Borissov-Peevski tandem to take over their successful businesses.

In an unprecedented move, the case became highly politicized after State Prosecution launched an attack on the President, under the pretext that one of his advisors had partnered up with the Bobokovi brothers in an "organized criminal group". This triggered a summer of anti-corruption protests last summer - as well as the acquittal of Bobokovi and President Radev's advisor of all charges so far.

Pressurising opponents - using all available means at the disposal of the state apparatus - has become a trademark of the past decade. As Kapital Insights has previously noted, the pressure against the publishing company of our publication and of Capital weekly, as well as the personal vendetta waged by the state against its owner Ivo Prokopiev, have been criticized by both domestic and international media watchdogs.

Alongside Mr Prokopiev, other prominent critics - and even former allies of Mr Borissov, like economists Traycho Traykov and Simeon Dyankov - have been subject to arbitrary judicial pressure for years. And yet several court instances have concluded that the "crime" they were tried for (facilitating the privatization of part of the Bulgarian state energy company by Austrian EVN) cannot be classified as such. Moreover, they had no executive power to take the action (agreeing on the privatization, which happened with a cabinet decree) for which they were being sued!

Rivers of gold for friendly businesses

While opponents had to defend themselves in court, GERB's allies prospered. The party instigated the creation of several mastodon holdings - the "Avtomagistrali" road construction company and the State Petroleum Company, which not only sucked in billions of state funds, but also redistributed them secretly.

In January 2021 alone, "Avtomagistrali" received 2,5 billion euro to complete several long-postponed highways. Of course, the company does not have the capacity to do that alone and will subcontract most of the activities to the cartel of well-known infrastructure giants like Trace and Patstroi, among others. The effect of all this is feudalization of the Bulgarian economy.

Energy sector on the brink

Next comes the always touchy subject of energy. During the last GERB mandate, the country invested close to 1,5 billion euro in order to force the completion of the TurkStream division gas pipeline via Bulgaria, a purely Russian project. At the same time, the IGB interconnector to Greece, which would finally allow for real diversification of deliveries by opening Bulgarian gas market to Azeri gas, has been postponed yet again.

What is more, reform of the sector as a whole has practically been stalled for over a decade, which threatens to lead to catastrophe. Liberalization of the energy market is but a pipe dream and the state continues to subsidize failing - but strategically important - energy companies such as the Maritza East-2 Thermal Power Plant.

Meanwhile, oligarchs such as Ahmed Dogan and Hristo Kovatchki continue receiving cash every winter in order to maintain polluting coal power plants at stand-by if need be.

Furthermore, the EU funds designed to alleviate the burden of energy transition from coal are likely to be allocated towards cheap and ineffective insulation of buildings - another subversive mechanism through which GERB has funded "friendly" companies to the tune of over a billion euro during its past two mandates.

Covid-19: survival of the fittest

Last, but not least, is the totally botched response to the Covid-19 crisis, cynically presented as a great success story by Mr Borissov. Over 34,000 excess deaths in 2020 alone tell another story.

Restrictive measures to stop the spread of the virus have been dictated by political rather than epidemiological considerations. Lockdowns always came late, when hospitals were already on the brink of collapse. Financial support for struggling businesses was equally tardy. And a lack of criteria for when closures and reopenings would take place made it impossible for small businesses, especially in the hardest hit tourism and restaurant sectors, to plan ahead.

The vaccination campaign is another proof of GERB's organizational incompetence. Bulgaria was left with no vaccines, as all eggs were put in one basket - AstraZeneca, which lagged behind with deliveries. If it were not for the EU solidarity mechanism that boosted deliveries of other vaccines over the past two months, Sofia would have been in an even worse place than it is now in terms of immunizations. The track record is already poor; Bulgaria trails last in the EU in terms of people getting their two shots, with no government campaign to promote vaccination taking place until recently.

This overview of GERB's (mis)rule might sound overly critical to outsiders - yet for most 'liberal' Bulgarians it merely skims the surface. So what is the real legacy of the last 12 years? It's a grim rap sheet. Arbitrariness in rule of law, top-tier irresponsibility, centralised decision-making in the hands of one man, mismanagement of crises and rampant injustices.

The quest to alter this dire legacy has just begun - and it is far from certain that dismantling it will work.

For the first time in more than a decade, there is a real chance that someone other than Boyko Borissov could rule Bulgaria. This will be a rupture: after more than 12 years in power, Borissov and his party GERB basically came to dominate every aspect of public or business life in the country.

While the acronym of former Prime Minister's party means Citizens for European Development of Bulgaria, its legacy after 12 years of political hegemony is anything but European.