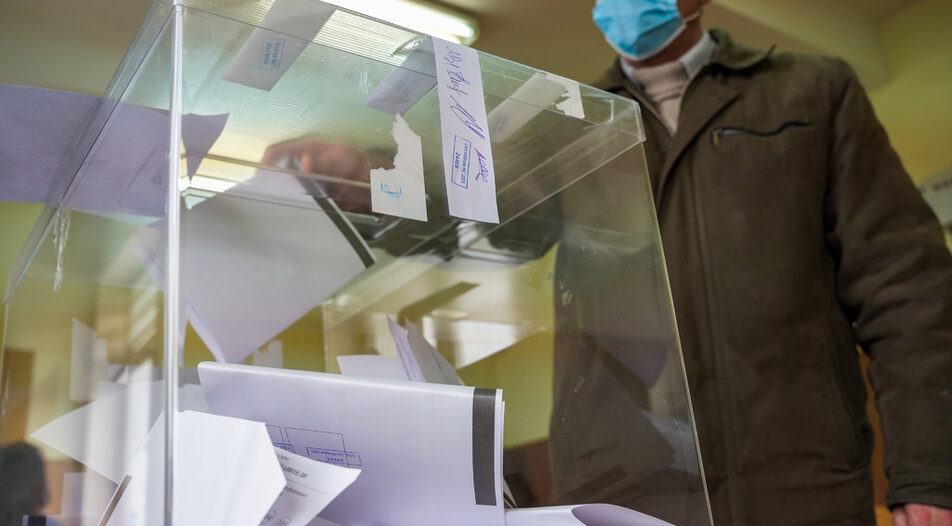 This summer’s elections come amidst a flurry of domestic revelations and international sanctions, but will likely reproduce the spring’s fractured parliament - the big question is if the scales may tip further towards change

One month from now, Bulgarians will vote for the second time this year in what promises to be a vote to consolidate the change that started on 4 April. On the surface, the 11 July election resembles the earlier vote, with parties and coalitions mostly similar and their main messages unchanged. First polls also indicate that the main parties will keep their parliamentary representations quite close to those of April.

And yet a lot has happened in the past two months to potentially tip the scales. An otherwise short lived Parliament that failed to produce a ruling coalition changed the electoral rules so as to minimize electoral fraud, and a commission set up to investigate Boyko Borissov's last cabinet caused quite a stir for GERB.

Stefan Yanev's caretaker government has dug out many skeletons from the closet of Mr Borissov and his associates. These range from a billion euro in state money given to certain companies to the most staggering - illegal organ transplants that took place in the government hospital "Lozenets."

But the cherry on top was placed by the US Treasury Department last week. The sanctions on the unofficial "behind-the-scenes-king" of Bulgaria's economy, Delyan Peevski, and Vassil Bozhkov, as well as several other people close to them and to GERB, sealed the public perception that Mr Borissov and his party were behind grand corruption schemes.

So what changes and what remains the same for the 11 July vote? Let's start with the basics:

Advertising
When it comes to the most significant parties and coalitions taking part in the election, as well as to their leading figures, little has changed.

GERB is chastened and embattled

GERB remains in coalition with the old anti-communist Union of Democratic Forces (SDS) and most of their nominees in electable places will mimic those from April. Cosmetic changes include pushing the party's nominee for Prime Minister in May, Daniel Mitov, to head the party list in one of the Central Sofia constituencies and bringing the disgruntled ex-Plovdiv mayor Ivan Totev back.

The parties' main messages remain the same, with a few caveats. Most importantly, as the eponymous Toyota jeep was taken away from ex-Prime Minister Borissov, the party lost its main, uhm, vehicle driving their political campaign. Stories of successful construction projects aired from the phone of GERB's PR Sevdalina Arnaudova are now substituted by pictures of the party's "young hopes" encircling Mr Borissov. He, in turn, does not brag of his government's successes; instead he presents himself as a victim of a coup that aims to illegitimately overthrow him - and even jail him.

This message might resonate with GERB's core electorate, but likely rings hollow with most Bulgarians who have largely welcomed the first whiff of the coming wind of change. Current surveys - one by Market Links (the only agency that got closer to the 4 April final results) last week, and one issued by Alpha Research on Wednesday, indicate that GERB continues to decline, while the runner-up in the last election is still advancing.

Not much further can be said about showman Slavi Trifonov's "There is such a people" (TISP) party which remains poised to come second again even though its only real campaigning comes from its party TV.

The big difference for TISP this time is that Mr Trifonov - the central enigmatic figure behind the party - announced he will not run for an MP, mysteriously adding that he "can hold responsibility, but from another institution". This could mean he is aiming to be Prime Minister, or even President - or simply that he is kicking the can down the road. Either way, he seems content to milk popularity from his anti-systemic messages while keeping a low profile and only communicating via social media.

Questions still surround the health of Trifonov, formerly popular as a chat show host, and this may account for his hedging his bets about his next moves.

Repositioning on the Left and far Right

More significant changes come from the camp of the big losers of the 4 April vote - the left-wing BSP, which lost second place for the first time in its modern history - and the nationalist parties.

The BSP has announced a "wide" left-leaning coalition that is less wide than promoted. The party invited some former big guns that it had kicked out to discuss a coalition, but omitted half the important ones. Among the returning prodigal sons are the factions of Rumen Petkov (and two-time President Georgi Parvanov) ABV and ex-Finance Minister Georgi Kadiev's "Normal State".

More importantly, however, another two notable ex-BSP renegades were left out of the "grand coalition" - Maya Manolova and Tatyana Doncheva and their movements "Stand up, BG" and D-21. The two factions will remain part of the "Stand up! Thugs - out!" (SUTO) coalition that barely made it into the previous parliament, but then made a name for itself in the notorious "Manolova" commission that investigated GERB's mischiefs.

A potential contender for the scarce leftist vote would be the "Left Union for a Pure and Holy Republic" of Prime Minister Zhan Videnov (1996-1997), which might draw about 2 percent according to the polls

On the far Right, the failure of the disunited "United Patriots" coalition from the 2017 elections led to a slight modification and rebranding. Now the coalition will consist of VMRO of ex-Defense Minister Krassimir Karakachanov, NFSB of former deputy Prime Minister Valeri Simeonov and Volya of businessman Veselin Mareshki but will exclude Ataka of Volen Siderov. It will be called "The Bulgarian Patriots" but the leaders of the three factions won't run for MPs in order to make way for younger members.

The repackaging of the nationalists doesn't seem to be working. Alpha Research reveals that at this stage even the combined forces of the three parties won't help them pass the 4 percent threshold. At the same time, the often underestimated Vazrazhdane ("Revival") anti-EU/NATO party is set to get 2,8 percent, up from 2,45 percent in the April vote and from only 1 percent in 2017.

The continuous infighting in the nationalist camp and TISP's successful promotion of a milder nationalism might mean that none of these parties make it into parliament.

There is not much to say about the contenders for the fourth place - MRF and Democratic Bulgaria. Both parties maintain a clear message. Sociologists expect a slight increase in Democratic Bulgaria's result following their good performance at the previous election. Meanwhile, the sanctioning of MRF member Delyan Peevski by the USA will likely not deter its strong ethno-corporate vote.

The MRF leadership continues to court Turkey, with chairperson Mustafa Karadaya visiting Ankara this week and causing fury for allegedly describing Turkey as his homeland in a meeting with a local politician. Whether a provocation or a slip of tongue, this could inflame nationalist rhetoric and bolster both the far-right and the Turkish party as has happened before.

Few surprises are expected from the other small parties that contested the 4 April election. Ex-GERB lieutenant Tsvetan Tsvetanov's "Republicans for Bulgaria" lost its biggest benefactor, US-based businessman Pavel Valnev, and is likely going down the drain. Exiled gambling mogul Vassil Bozhkov's Bulgarian Summer faction has slightly better chances if it rides on the anti-American wave in light of the sanctions under the Magnitsky Act that hit its leader. But it might also suffer from the effects of the sanctions, as it is now unlikely to receive funding from banks.

In practice, the main motif of the election will remain "change" versus "stability". It appears that Bulgarians seem frustrated with current political conditions, but are also hopeful that change is possible - which might direct them to the polls en masse to back anti-status quo parties. Both agencies expect a high turnout, with Market Links saying that 63 percent of respondents have said they have made up their mind and will vote, while Alpha Research claims that a more modest 53 percent say they are sure to vote.

The two agencies have picked up differing perceptions of the work of the caretaker government, with Alpha Research claiming most people are ambivalent about it and Market Links saying attitudes towards Stefan Yanev's cabinet are mostly positive. In fact, Mr Yanev and President Rumen Radev head the list of most trusted politicians and are the only two leaders with positive "approval" ratings. Curiously (or perhaps not) ex-Prime Minister Borissov lags in sixth place behind the likes of Slavi Trifonov, his acolyte Todor Yordanov and Maya Manolova.

Market Links also sees general approval to electoral changes made by the short-lived 46th Parliament that saw machine voting becoming compulsory in larger polling stations in Bulgaria and abroad, as well as dropping the limit of polling stations outside EU countries. In practice, these changes might turn out to be harder to pull off because the state failed to negotiate acquiring additional 1,500 voting machines with the company that delivers the rest, Ciela Norma. Also, many voters (especially over-60s) might find it hard to operate the machines, potentially encumbering the process. But, on the positive side, a lot of the controlled vote practices from previous elections might be harder to pull off.

In the light of the 4 April vote that showed change is possible, and subsequent revelations of rank corruption and incompetence and then the imposition of sanctions, the 11 July vote promises to be interesting. Although it is highly likely that it will reproduce the politically fractured parliament from springtime, any slight rebalancing of the proportion of MPs might make a difference. Especially if it is in the direction of the protest parties such as TISP, Democratic Bulgaria and SUTO, which will be more amenable for compromise this time and indeed form an anti-GERB coalition.

One month from now, Bulgarians will vote for the second time this year in what promises to be a vote to consolidate the change that started on 4 April. On the surface, the 11 July election resembles the earlier vote, with parties and coalitions mostly similar and their main messages unchanged. First polls also indicate that the main parties will keep their parliamentary representations quite close to those of April.