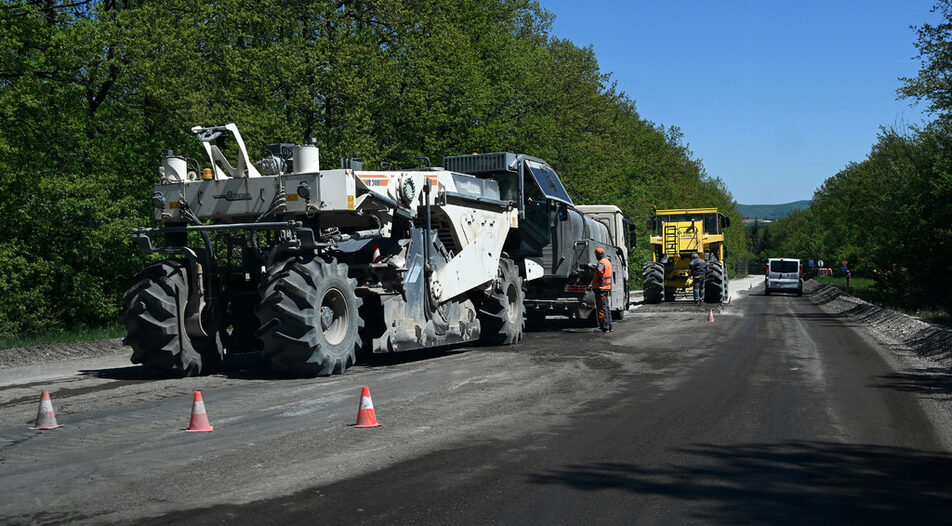 A large portion of the money owed by the Bulgarian government to roadworks companies for road maintenance has been illegally allocated from a contractual point of view, a probe carried out by the Ministry of Regional Development and the Ministry of Finance showed. The investigation was supposed to look into the so called "golden contracts" of the government's Road Infrastructure Agency concluded by the former ruling GERB party. Roadworks companies have been protesting for two years against the new coalition government's refusal to acknowledge the legality of the contracts. Ultimately, regional development minister Grozdan Karadzhov resigned earlier this month after the government declined to make part of the payments provided for in these contracts.

The probe reviewed 34 roadworks contracts and 900 assignments related to them. The commission carrying out the review found that nearly 80% of all issued tasks do not correspond to the terms of the contracts. In other words, out of the 1.58 billion euro allocated to works on the contracts nearly 1.27 billion euro have been awarded illegally.

After a long period of protests the current government paid out a little over 306 million euro on the issued roadworks contracts. Then Karadzhov requested that the remaining 306 million euro be earmarked for payment to roadworks companies. In his request to the finance ministry which was turned down, leading to his resignation, a further payment of nearly 612 million euro on already started, but uncompleted projects was laid out.

What the commission uncovered

A point of interest in the probe were the contracts for road maintenance in the country's 28 administrative regions, which were issued once every 5 years on a 'subscription basis' to a single consortium in a region. An additional verification was carried out of the contracts for the maintenance of motorways.

There is a grand total of 900 assignments that have been issued with the additional verification confirming whether the issued tasks correspond to the type of contracts, i.e. whether the law has been broken in the public tenders. All major repairs, road reconstruction or new road construction projects have been deemed as not corresponding to the terms and conditions of the contracts.

The highest percentage of these discrepancies are present in Varna, Targovishte, Lovech and Yambol regions, where the percentage of illegal actions vary between 97 and 99%. All in all, with the exception of Gabrovo, Dobrich, Kyustendil and Sliven, in all other regions the percentage is higher than 70%, whereas in most of these it is over 90%.

Only 5 of the contracts have not had a deviation from the legal definition - those in Ruse, Silistra, Kardzhali, the contract for Maritsa motorway and the section of Trakia motorway from Burgas to Yambol.

Problem with the laws and oversight

The secretive and questionable nature of these contracts and assignments is evident in the fact that the investigative commission spent a month and a half only gathering the documents associated with them.

In most of these assignments there were construction and technology designs, which have not been introduced via the legally prescribed route and do not have a permit for the start of construction works.

The conclusion of the commission is that there is an issue with the law, which is greatly overcomplicating a lot of the repairs. According to the commission, it can take up to 10 years to legally repair a main road.

The Road Infrastructure Agency has repeatedly taken advantage of this for many years to take on contracts, for which there were no approved documents in line with the Spatial Planning Act. It is also evident that there has been no effective oversight of the actions of the Road Infrastructure Agency, as the national construction watchdog DNSK does not have enough staff and has very watered down powers.

In addition to glaringly obvious illegal construction works this practice has resulted in inflated prices and expenditure norms as well as inexplicably high additional costs.

A very good example of this is the design for the repairs of Trakia motorway from two years ago, which carries a price tag of 7700 euro per kilometer with a forecast of 40 thousand work hours for the design. And this is for the design of repair works of an existing motorway and not the construction of a new one.

Logically, the highly anticipated report of the investigative commission caused a furore upon its release and provoked further disputes in the already shaky coalition cabinet.

"It is a lie that I want these contracts to be paid for. [Prime minister] Kiril Petkov wanted us to pay out these 306 million euro, I did not want to pay the first 306 million before the check," Karadzhov said during an emergency press conference called two hours before the one scheduled by finance minister Assen Vassilev. Karadzhov stated that Vasilev would most likely be "spinning lies".

"I only want the decision of the National Assembly to be carried out. Additional checks must be carried out and we need to hear what will be decided as a result of them," said Karadzhov.

Vassilev pointed out that the decision by the National Assembly states that whatever is to be paid out to contractors will be decided after the check is completed. From here on DNSK must check every project, then the State Financial Inspection Agency will also have to verify the information and in the end all documentation will be sent to the Prosecution Office. The finance minister also suggests that if as a result of the investigation it is found out that a certain project corresponds to the assignments, a special law will have to be passed for leniency, which would allow payments to be made for it.

Under the decision, the remaining lump sums will be paid out after the conclusion of the checks. In its report however the commission states that a new commission would have to be created, which would have to specifically deal with the valuation of the projects.

Who are the 7 big corporations controlling the roadworks sector

Payments made and other data on the contracts

The company of the former head of the state road agency Veliko Zhelev - Hydrostroy, has rapidly expanded in size and profitability in recent years. Through associated organizations and consortiums the company has received an estimated 613.4 million euro in public funding from the then ruling GERB party. Moreover, they were the only company to be awarded a new huge contract - for the construction of a tunnel under the Shipka peak - worth over 178.85 million euro - by the current coalition government. The contract was signed on the 8th of June under a decision by regional development minister Grozdan Karadzhov who had already resigned.

One of the most active and biggest construction groups in Bulgaria. It includes Groma Hold (formerly Agromah), Evropeiski Patishta (formerly Roads Plovdiv) and Vodno Stroitelstvo Blagoevgrad. Over the years these companies have been taking part in some of the biggest roadworks projects, but their most recent success is the framework contract with state-owned Highways company for the construction of Hemus highway. In the construction sector, it has been said for years that the group is very closely linked with GERB and their leader Boyko Borissov through Ivo Tonev - a person who does not formally appear in any of the companies of the group.

At the end of last year the group took center stage in a public scandal following revelations of the Ministry of the Interior about a withdrawal of sacks of cash destined for the construction of Hemus highway. According to unofficial sources, a total of 42.92 million euro in advance payments was granted for the construction of Lot 5 of the highway to Vodno Stroitelstvo Blagoevgrad. From this total, 30.65 million euro was withdrawn in cash through other companies and bank accounts. Any construction works on the highway for which these advance payments were made have yet to start.

Since the end of 2019 a major stakeholder in the company is Raycho Kotov. That coincides with the meteoric rise of the company on the local construction market. A major part of its works is the road Vidin - Botevgrad and sections of Hemus highway. Kotov's name is associated with the GPgate, a journalist probe by Bivol investigative website. Until 2018 he was registering the documentation in the Commercial Register connected with construction company GP group led by Vladimir Zhitenski.

In this business group from Targovishte there are ten companies including Patperfect-T, Patni Stroezhi - Veliko Tarnovo, Viastroy, Patengineering. In the first years of Patengineeringstroy - T, when its owners were businessmen Grigor Ivanov and Ivan Ivanov, they were widely perceived as close to the Movement for Rights and Freedoms (DPS) party. From the register of public tenders it is evident that they are "subscribed" for winning contracts in road construction auctions in northeastern Bulgaria. After GERB came to power they started winning public tenders all over the country. Very often a part of the consortium of Grigor Ivanov is Zhelev's Hydrostroy. The two - Ivanov and Zhelev - are owners of Road construction - Veliko Tarnovo company with stakes of 66% and 34%, respectively.

Official owner is Cyprus-registered offshore company - Kolvik Services Limited, through which the controlling shareholder of PST group JSC is Kamen Kichev, former deputy minister of transport in the first GERB cabinet. He is one of three directors at PST along with Petko Hitrov and Nikolay Arabadzhiev. One of their emblematic projects is the failed repair of the square around Alexander Nevsky cathedral in Sofia and the area around it.

Founded in 2006 by Veliko Raykov, the company has 10 employees and reported an average income of 510 thousand euro a year until 2012. From then on government contracts seem to have started falling from the sky for the company, which received a total of 170.9 million euro in the last 3 years. The company is loosely associated with Christophoros Amantidis - Taki, a local crime lord, currently residing in Dubai and wanted by Bulgarian authorities.

Additionally, the name of Taki surfaced when Prime Minister Kiril Petkov publicly handed over a folder with the names of people that needed to be investigated by the Prosecution Office. The PM inquired as to whether Taki had been connected to illegal dam construction contracts handed out by the GERB government.

The group is in the last place for in-house contracts with the Road Infrastructure Agency, as most of their projects have been won through public tenders.

A large portion of the money owed by the Bulgarian government to roadworks companies for road maintenance has been illegally allocated from a contractual point of view, a probe carried out by the Ministry of Regional Development and the Ministry of Finance showed. The investigation was supposed to look into the so called "golden contracts" of the government's Road Infrastructure Agency concluded by the former ruling GERB party. Roadworks companies have been protesting for two years against the new coalition government's refusal to acknowledge the legality of the contracts. Ultimately, regional development minister Grozdan Karadzhov resigned earlier this month after the government declined to make part of the payments provided for in these contracts.

The probe reviewed 34 roadworks contracts and 900 assignments related to them. The commission carrying out the review found that nearly 80% of all issued tasks do not correspond to the terms of the contracts. In other words, out of the 1.58 billion euro allocated to works on the contracts nearly 1.27 billion euro have been awarded illegally.