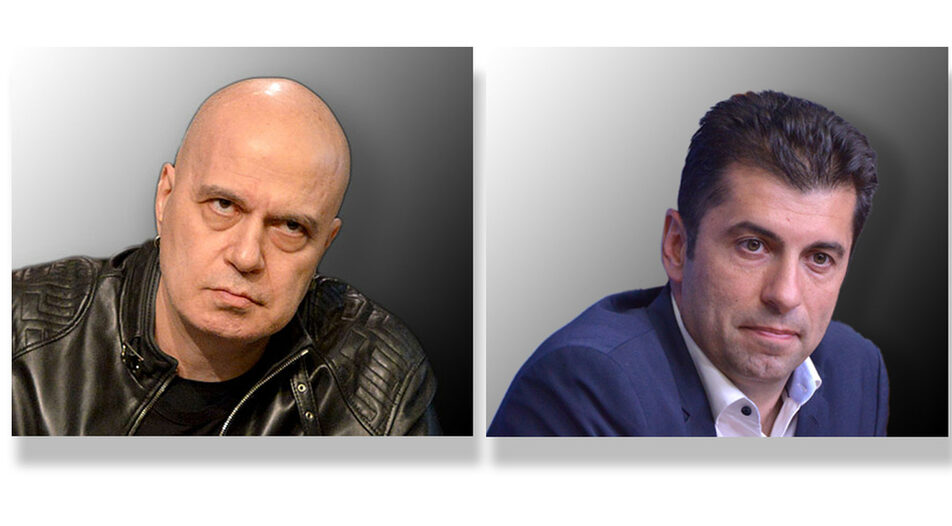 TISP leader claims he abdicates over N. Macedonia "treachery" and gov’t debt, WCC blames Trifonov’s party for backing off from corruption reforms and trying to feed the road cartel

"I am putting an end to this coalition and to this agony." With these words TISP leader and showman Slavi Trifonov announced on his ⅞ TV channel on Wednesday afternoon that he is pulling out his party's four ministers, thus throwing the country into fresh political crisis.

The TISP leader's main arguments were that Prime Minister and leader of the largest party in the coalition, WCC, Kiril Petkov, is leading his own foreign policy on N. Macedonia, which "blatantly, brazenly and unilaterally violates the signed coalition agreement". In addition, Trifonov claimed that Finance Minister Assen Vassilev has allegedly been spending 9 billion BGN in a non- transparent manner over the past few months.

WCC and Prime Minister Petkov, however, responded with their own press conference just half an hour later. They claimed that that the main reason for TISP's withdrawal is very different - namely the government's decision not to back Regional Development Minister Grozdan Karadjov, who is from TISP's quota, in his demand for the allocation of an additional 3.6 billion BGN from the state budget for road construction.

"Mr Karadjov asked 3.6 billion for the Regional Development Ministry, in order to then pay these same firms that have been investigated for fraud by Minister [of the Interior Boyko] Rashkov," Mr Petkov told reporters.

TISP's withdrawal from the government in fact comes just a few hours after the ministers from the party's quota, including Foreign Minister Teodora Genchovska and Mr Karadjov, left the government council over differences about cabinet proposals for a mid-year budget spending update.

Deputy Prime Minister and Finance Minister Assen Vassilev said that his party and the rest of its coalition partners are committed to continue implementing their coalition program under a minority cabinet. Whether this would be possible, however, remains unclear - the country has never been governed by a minority cabinet in its modern history and the hope shared by the WCC leadership that it can rely on renegade TISP MPs to back its proposals seems forlorn.

"There are two reasons why this coalition does not work and why we have no place in it - Macedonia and the fact that there is no money in the country anymore," Mr Trifonov claimed.

On the first topic, Mr Trifonov said: "Prime Minister Kiril Petkov is pursuing a foreign policy that is different from that of the Foreign Ministry, different from that of the National Assembly, and different from the one agreed by the Consultative National Security Council. The Prime Minister has his own foreign minister, who is called Vesela Cherneva [foreign policy advisor to Mr Petkov - editor's note]. The Prime Minister has promised various leaders from Europe and the world that he will lift the Bulgarian veto on N. Macedonia's EU accession and is doing everything possible to make this happen, even though a huge part of Bulgarian citizens want N. Macedonia to first implement the treaty between the two countries," Trifonov claimed. He claimed that the Mr Petkov policy is "a treason."

On the second topic, Mr Trifonov said: "Since Asen Vassilev has been Finance Minister, billions are flying around, left and right. No one has the right to experiment with our money - to spend it single-handedly,even if they graduated from Harvard, even if they graduated from the Galactic Institute. Nobody knows what the biggest sum in Bulgaria's history - 9 billion BGN - was spent on."

Unsurprisingly, the leaders of the largest party in the ruling coalition interpreted the situation totally differently. They blamed TISP for an attempt to redirect crisis spending in the mid-year budget review towards compromised road construction companies and an attempt by the party to sabotage changes in the Anti-Corruption Commission (CIAF) and the law governing it.

Mr Petkov kicked off by saying that Regional Minister Karadjov asked for 3.6 billion BGN to go towards his ministry, in addition to the 2.2 billion BGN already dedicated to the ministry to cover already completed construction work by road companies in the past year. In his words, Mr Karadjov asked that the money go without tenders to companies, currently under investigation by Internal Minister Rashkov.

At the same time, according to the Prime Minister, TISP rejected WCC's proposal to assign Mr Rashkov himself as the new head of CIAF, adding that the populist party also attempted to thwart the introduction of a new anti-corruption law to Parliament.

"Suddenly they want a 6 billion budget for the Ministry of Regional Development, then they do not want to have a reformed CIAF, and in the end we want to appoint someone like Minister Rashkov, who is ready to head this organization, and they just say 'no'. Well, it is not going to happen! We are determined that we are ready for a minority government, but we will not spend a single lev without supervision, not a single lev without control. Our promises to reform CIAF will materialize and Mr. Rashkov will be at the head of this organization," Mr Petkov concluded.

Two options now confront the country after today's developments: Bulgaria will either get its first minority government in its modern history - that is, if the optimistic hopes of the WCC leadership that TISP MPs would back their new proposed ministers and policies come to fruition. This, however, would lead to a hung parliament, whereby the influence of GERB, MRF - and even, to some extent, of radical Vazrazhdane - would determine state policy. Needless to say, this is a highly unlikely and volatile scenario.

Alternatively, Bulgaria will re-enter the vicious cycle of elections that appeared to have (thankfully) ended seven months ago. This would hardly augur well given the current environment of war and inflation.

"I am putting an end to this coalition and to this agony." With these words TISP leader and showman Slavi Trifonov announced on his ⅞ TV channel on Wednesday afternoon that he is pulling out his party's four ministers, thus throwing the country into fresh political crisis.

The TISP leader's main arguments were that Prime Minister and leader of the largest party in the coalition, WCC, Kiril Petkov, is leading his own foreign policy on N. Macedonia, which "blatantly, brazenly and unilaterally violates the signed coalition agreement". In addition, Trifonov claimed that Finance Minister Assen Vassilev has allegedly been spending 9 billion BGN in a non- transparent manner over the past few months.