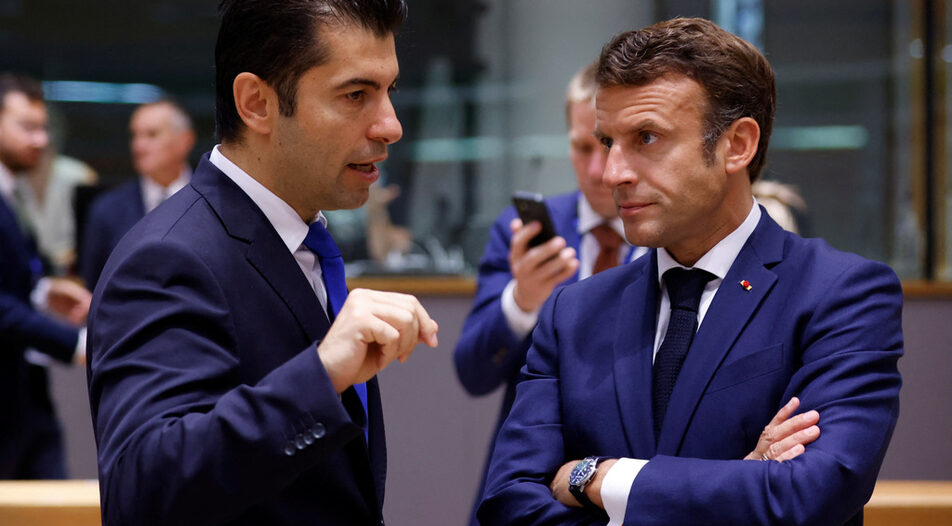 Some hard explaining to do in Brussels

Some hard explaining to do in Brussels

"Bulgaria is a disgrace, but it's not simply Bulgaria. The reason is the crooked spirit of the enlargement. Bulgaria is its most stunning manifestation. The enlargement spirit has gone from being the shared vision of an entire community to the kidnapping of individual member states."

It's not every day that a leader of a neighboring country says something like this. Yet Albanian Prime Minister Edi Rama did not spare any punches when he met the now ex-PM Kiril Petkov in Brussels this week.

Rama is, of course, completely right (and he is not the only one thinking that). His country has been held hostage for absolutely no other reason than being tied to North Macedonia in the accession process and unfortunately, the Macedonian-Bulgarian talks are not something you want to be caught in the middle of.

It might sound strange to talk about the North Macedonian veto in a week when the government in Sofia fell. Yet bear with me, and I'll try to point out why one explains the other.

When Kiril Petkov&Co rode to power, they neglected foreign policy. It was, they thought, not really important. They had more pressing issues to focus on - corruption, billions of stolen levs, holding the previous government accountable. So they handed the Foreign Ministry to a coalition partner.

By the time the Ukraine war started, they already knew they had fucked up. Foreign policy was becoming a primary concern and the question about Macedonia was becoming crucial. The EU and France at its helm wanted Skopje in. Petkov was not comfortable with his foreign minister and so took on a private foreign advisor.

The French tried really hard to negotiate a deal between Sofia and Skopje. Their offer was by far the best Bulgaria has ever received on the matter. Yet by the time it arrived, it was too late.

Petkov has allowed his shaky coalition partner to use the Macedonian question and the negotiations as an excuse to break down the coalition. In order to save face, the PM claimed he was transferring all power in this area to Parliament. In that manner, he tied his own hands - he couldn't accept the French proposal, good as it was. He had all the power to do that yet didn't dare to. And in Parliament, there was a meltdown.

In the end, the coalition could not be saved, the no-confidence vote was not overturned and Petkov came to Brussels empty-handed, because in the mess that is these days the Bulgarian parliament they are still deciding on what to do (hopefully by today they would at last vote).

It was not for a lack of options that the government did this. They could accept the offer. It was, in the words of their own foreign ministry, the best option on the table.

It was for a lack of political will to fight this battle. There are so many other ones to fight, they thought. For this one they had to explain why, they had to fight off the nationalists, they had to make deals with GERB - the same party whose model they were trying to dismantle. Let someone else take the hit.

This is, in theory at least, a legitimate political strategy. It might ensure survival. Yet it leaves a bad taste in the mouth. This is the second big issue over which the government is transferring power to Parliament - the first being the money due to road construction companies. It is also one of many that were left unsolved in the 6 months of the Petkov government.

They say things might get better next time around. Yet what if they still need to make compromises, in order to get things done? Edi Rama might have something to say about this.

This week newsletter was generously helped by

As mentioned, on Wednesday, after less than seven months in power, the cabinet of Prime Minister Kiril Petkov succumbed to a no-confidence vote initiated by GERB over its allegedly erroneous fiscal and economic decisions.

This came after an underwhelming debate between cabinet members and the opposition on Tuesday in Parliament, during which the economy, supposedly the touchstone of the motion, was barely broached.

It was clear that the new anti-government majority, consisting of GERB, MRF, Vazrazhdane and the 19 loyalists from Slavi Trifonov's TISP party, had only been seeking an official reason to strike against Mr Petkov - and the moment arrived.

Yet, the new coalition only had a fragile majority in the National Assembly - and several pro-government rallies probably made them feel slightly uncomfortable, so they had to bring in the heavy artillery. This came in the form of MRF MP Delyan Peevski, who appeared in the workplace for the first time since last December, bringing in hundreds of MRF supporters for a "counter-protest" from the rural strongholds of the "liberal" party.

So let's be friends?

At least that's what GERB leader Boyko Borissov is toying with - just a day after his party took down the Petkov government and he personally called Mr Petkov a "coward" and "liar". Mr Borissov, who is not in Parliament, told reporters that it's time for "all Euro-Atlantic parties" to come together in Parliament, settle their grudges and work on important things together - from the dropping of the N. Macedonia veto to budget issues.

Not so fast, Borissov

Of course, this is hardly going to happen, judging from the statements of both the Prime Minister and his deputy Assen Vassilev after the vote.

So it's elections again then?

Probably yes, judging from the fact that Parliament has barely worked in the past several days. Everyone seems gearing up FOR a new vote in the autumn. And we thought we could last a year without one, at least.

The first two cases of the novel disease - of two men, aged 41 and 44 respectively - were registered in Bulgaria on Thursday, the Health Ministry announced. Both men are in good condition and have been isolated. They had traveled abroad in the past few weeks - to Spain and the UK, respectively.

The most recent EU survey exposed an unfortunate - albeit hardly surprising - tendency for Bulgarians to prioritize their pocket instead of shared values. According to the Eurobarometer study published on 22 June, 70 percent of Bulgarians believe that keeping prices low ought to have greater priority over safeguarding European values like freedom and democracy, which are deemed more important for only 28 percent of respondents. For the EU as a whole, these ratios are almost reversed - 60 percent prioritize values versus 40 percent - stable prices.

Three Seas initiative's investment fund is buying out a significant stake in the company that owns the port of Burgas. The entity is related to the local tycoons Kiril and Georgi Domuschievi. The amount they will invest and the price for which they are acquiring a stake are not clear.

Leads the field in terms of the number of customers, while Yetter is leading in mobile services revenue. BTC - Vivacom is leading in internet revenues and Bulsatcom - in TV. This is the result from the annual report of the regulator. The mobile and fixed internet market sees a 21% growth in 2021 compared to a year before.

The concessionaire of Sofia Airport is starting a 70 million euros renovation of the terminal. It needs to finish in two years and revamp the airport completely - complete with new parking, restaurants and stores.

Are there gas supplies for July?

Yes. it became clear that the national gas distributor Bulgaragaz booked 62 million cubic meters of LNG in the Greek LNG terminal Revitusa. The fuel will arrive on the 2nd of July and will be transported to the Bulgarian gas transmission network after it gets liquefied. The monthly consumption of Bulgaria varies, but in summer it is around 150 million cubic meters.

Serbia's energy crisis would deepen if Belgrade does not solve the lack of coal which fires up the old coal plants in the country. The Bulgarian Mini Maritsa Iztok, a 100% state-owned sole-proprietor joint-stock company, signed a contract with Serbia for the transportation of 1,75 million tons of coal for next winter. Roughly, the price per ton agreed is 95 lv. This is the biggest export deal of its history.

Hristo Borissov - CEO of Bulgaria's one and only unicorn Payhawk. Borissov jumped head-first into the political crisis this week, after a member of the previous governing party cited his company as an example of their good politics. Borissov posted a lengthy FB post to explain just how difficult it was to work in the country when it was run by GERB and gave a day off to his employees in order to protest in front of the Parliament.

The Holy Church - not exactly a company, but well deserved. In the midst of political impotence on the Macedonian issue, the Bulgarian church announced it is lifting the schism from the Macedonian one. Thus it became only the third orthodox church to recognize Macedonian independent church.
Words of the week: Da go duhat bednite (F*ck the poor)

During Tuesday's no-confidence debates the otherwise restrained Deputy Prime Minister and Finance Minister Assen Vassilev used vocabulary that is hardly expected from a graduate of an elite Ivy League university. The reason for his outburst was GERB's provocative behavior during the debate. "What I hear from you is not a suggestion on how to better manage the crisis, or how to protect people hit by inflation. I hear populist slogans and an economic philosophy which - if I have to summarize it in one sentence - is: "F*ck the poor!", Mr Vassilev exploded. The phrase is a reference to a scene in the 1980s comedy "History of the World - Part 1" directed by Mel Brooks, where the emperor asks his senators whether building homes for the poor ought to take precedence over building palaces for the rich, just to receive their clear response: "F*ck the poor!"

This, as you can imagine, gave plenty of work to meme factories on all sides of the disinformation war.

"Bulgaria is a disgrace, but it's not simply Bulgaria. The reason is the crooked spirit of the enlargement. Bulgaria is its most stunning manifestation. The enlargement spirit has gone from being the shared vision of an entire community to the kidnapping of individual member states."

It's not every day that a leader of a neighboring country says something like this. Yet Albanian Prime Minister Edi Rama did not spare any punches when he met the now ex-PM Kiril Petkov in Brussels this week.