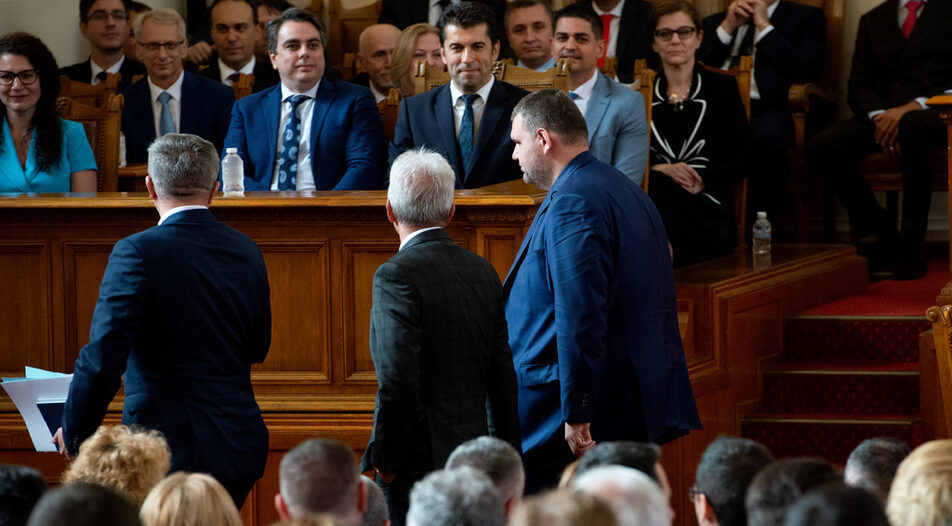 The motion was passed with 123 MPs from GERB, MRF, TISP and Vazrazhdane

The no-confidence vote passed with 123 votes "in favor," coming from GERB, MRF, TISP and Vazrazhdane and 116 MPs voting "against," including Mr Petkov's own WCC party, their coalition partners from Democratic Bulgaria and BSP, as well as six defectors from Slavi Trifonov's TISP. Almost all 240 deputies - apart from Vazrazhdane's Elena Guncheva, who underwent a medical intervention recently - attended the vote, including MRF MP and oligarch, sanctioned under the Magnitsky Act Delyan Peevski, who rarely comes to the National Assembly.

Two demonstrations took place on both sides of the Parliament building against the backdrop of the vote of no-confidence - one in the front, on Tsar Osvoboditel square, a pro-government gathering, greeting the news of the vote with boos and shouts "Mafia." At the back of the building, from the side of the St Alexander Nevsky's Cathedral, an anti-government protest took place, bringing together supporters of the nominally liberal, pro-EU MRF from small towns, as well as backers of the anti-EU, Russophile Vazrazhdane party.

A historic moment - and what comes next?

This is the first government in Bulgaria's post-Socialist history to be ousted by a successful vote of no-confidence. The incumbents will still have a possibility to try to form a new cabinet within this parliament. In the coming weeks, President Rumen Radev will kick off the "mandate roulette" by handing the first mandate to form a government back to WCC, which will get the chance to seek a new coalition formula and 121 votes to back it. Outgoing Prime Minister Petkov has already said he will attempt to form a new cabinet with him as leader once again.

If that motion fails, the second mandate goes to the second largest party - GERB. After the vote, one of the parliamentary leaders of the party, Dessislava Atanassova, said that her faction would not attempt to form a cabinet within this National Assembly.

In that case the President would pass on the third mandate to a party of his own choosing, with the hopes that he will select the parliamentary faction with the highest chances of forming a cabinet. If this party also fails, Mr Radev will appoint the fourth caretaker cabinet in his political career, which will then start preparing for the early vote in the autumn.

How did we get here?

The political crisis kicked off after TISP leader Slavi Trifonov announced he was pulling out his four ministers from the coalition on 8 June - formally citing the Prime Minister's "subversive" parallel policy of dropping Sofia's veto over N. Macedonia's EU accession, as well as his party's reservations over the budget update, proposed by Finance Minister Assen Vassilev. Soon after, GERB tabled a vote of no-confidence against the cabinet, solely citing the cabinet's allegedly erroneous fiscal and economic policy.

The outcome of the vote was unclear until the last moment because of the contradictory signals coming from the opposition. Over last weekend, GERB leader Boyko Borissov signaled that he was hesitant about the no-confidence vote, even though it was tabled by his own party, and left a loophole for his MPs to back out. On the day of the vote, he also suddenly decided to back an immediate support for the government on the topic of overturning the veto on N, Macedonia. This was something WCC has been seaking to do in principle from the beginning and which TISP leader Slavi Trifonov is against. Thus, by Wednesday evening it remained impossible to predict how GERB would vote.

WCC, on the other hand, demonstrated they were not ready to make any concessions with their opponents from GERB and MRF and, until the last moment, hoped to attract more defectors from Slavi Trifonov's TISP party. They needed twelve - but only six chose to back the government on the day of the crucial vote.

The debate on the no-confidence vote on Tuesday made the outcome of the motion hard to predict - discussions were insubstantial, largely ignored the main topic of the vote - the alleged fiscal and economic failures of the Petkov cabinet, and the main opponents of the government from GERB and MRF seemed uncharacteristically passive. The opposition's behavior even gave the government the opportunity to explain and defend its economic and financial policy with data, facts and comparisons with previous governments. GERB's motives for the vote of no confidence were almost exclusively economic and financial: according to the former ruling party, the government has allowed inflation to spiral out of control, which is currently leading to the impoverishment of the general population and an economic collapse. The budget deficit will exceed 3.5 percent by the end of the year, and the country will be heavily indebted, GERB financial spearhead Kiril Ananiev claimed. These grim predictions did not prevent GERB from proposing even greater increases to old age pensions in the pending budget update.

And while the opposition managed to take down the government, their immediate next steps were to rush through a motion that ought to untie Prime Minister Kiril Petkov's hands on the N. Macedonia veto question. Straight after the vote on Wednesday evening, both MRF and GERB filed their own propositions for parliamentary declarations in support of the so-called "French Proposal" for protocol that regulates Bulgarian-N. Macedonian relations, allowing for Sofia to lift the veto on Skopje (and, by extension, Tirana's) kicking off its EU accession process.

If one of these declarations pass, this would theoretically allow Prime Minister Petkov to go to the EU leaders' council in Brussels today with a mandate to lift Bulgaria's two-year-long veto.