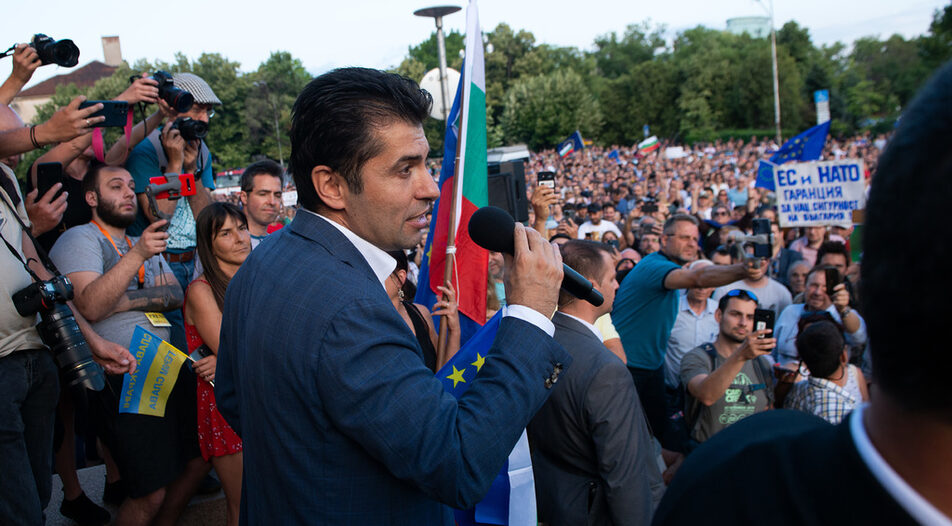 A total of 124 deputies from the opposition voted against the government and 116 MPs were in support. There were 239 deputies in the hall, as Elena Guncheva from Vazrazhdane was missing. "We promise that we will not give up and we will fight for a European Bulgaria without corruption," said Petkov after the vote.

However, the ex-ruling party still has a chance to form a new cabinet during the current Parliament. In a week the President will start the procedure of introducing mandates and the first party to receive one will be WCC. If a cabinet is not formed with the support of 121 votes, after the mandate has been passed to other factions, then this will result in a caretaker cabinet and new elections this autumn. In the meantime, Petkov remains as prime minister.

MRF and Vazrazdane hold joint protest against the government

Vazrazhdane and MRF's supporters gathered together to protest against the government in front of the official entrance to the National Assembly. Even MRF deputy and businessman Delyan Peevski joined the protests. Later, Vazrazhdane said that they canceled their protest. On the other side, various individuals and organizations also came to show their support for the cabinet during the no-confidence vote.

Bulgaria may lift its veto against Northern Macedonia's EU accession this week, announced today the leader of the largest opposition party GERB, Boyko Borissov. He pointed out that MPs from GERB would support lifting the veto with their votes.

Borissov's proposal was for the government to first approve the French presidency's formula to unblock the process of Northern Macedonia's accession to the EU, and then to process it through the National Assembly and receive the support of 59 GERB deputies. However, the government doesn't like this proposal.

Cabinet spokeswoman Lena Borislavova explained that Petkov insisted on the proposal first going through the parliamentary foreign policy committee, then through the National Assembly, and, finally, the Council of Ministers.

Without a new Parliament Speaker

Due to the lack of a quorum, today's morning plenary session of the National Assembly did not take place. Deputies had to discuss the procedures for electing a new Parliament Speaker after the dismissal of WCC's Nikola Minchev last week.

Although they were at the National Assembly, deputies from ex-ruling GERB, MRF, TISP, and Vazrazhdane did not register and blocked the opening of the plenary session.