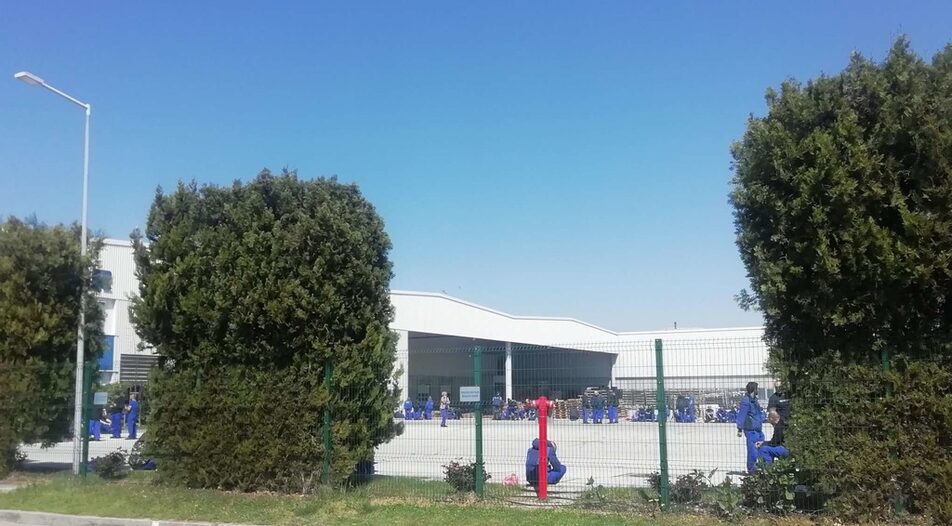 K Insights 15/04: One more thing to worry about this year, and at least two things to be hopeful about

"Well, after telling us about the salary rise, they also raised the prices in the canteen by 0.30 stotinki, which is a mockery. Complete mockery." Such was the angry rant of an employee in Liebherr's factory in Plovdiv, while explaining why the entire staff effectively went on strike this week.

It's a strange story.

It's not, of course, the 30 stotinki (15 cents) that made hundreds of workers down tools. They claim they are unhappy about the 6% pay rise, which was announced this week, because it doesn't compensate for inflation (10% in February) and the workload required. They also require more money for food vouchers and transportation.

The Liebherr company local management says they are surprised by events. They don't understand why a strike erupted after a pay rise, and blame it on "outside agitation".

It's a noteworthy event. Liebherr is the first big investor in Plovdiv's economic zone, which has grown to be the industrial miracle of Bulgaria. It's not the best paid place in the zone, but it's comfortably in the middle and definitely not on the low side. It has no union representatives and has had no previous trouble with its workers. In fact, this is the first pay-related industrial strike in Bulgaria in 7 years (and the last one had unions involved).

While I don't claim to know what outside agitation the management meant, there are pressures beyond the factory gates that mess with the Excel sheets. It's not only the inflation, although transport has risen by 20% and food by 13% compared to last year. The tight supply chains, the galloping prices of raw materials, and the fuel craze: all of this puts producers in a bind. Combine that with a labor market that is scratching the bottom to find people (unemployment in Plovdiv is under 4%) and the fact that Bulgaria is still massively under the median pay-levels in the EU and even beneath the CEE region. Overall, you get the idea. 30 stotinki are the straw on the camel's back.

Liebherr might be just the first of many victims of this year's combined crises. Will there be a quick resolution? One must hope so, on both sides. The people want a 15% pay rise, and the refrigerator-producing company has no interest in keeping its lines shut or losing qualified personnel to others around. Or, as the strikers in the courtyard put it:

"We're waiting. The Germans are arriving from Germany, that's what they told us".

The newsletter was helped this week by

Ten years after their creation, Parliament officially announced the dissolution of the Specialized court and Prosecutor's on Thursday with the votes of the ruling coalition and Vazrazhdane. The unit was created during the first of three GERB mandates and was launched with a fanfare of promises - to get the best judges on board, convene them in one place and let them focus exclusively on high-profile corruption and organized crime cases. It was one of those promises GERB made that was never fulfilled.

Instead, the "special" magistrates turned out to be little more than an instrument of those in power to abuse dissenting voices and pressure recalcitrant businessmen. The amendments to the Judiciary Act providing for the closure of the special justice system have been proposed many times over the past year and passed three times at first reading in the last few parliaments, but Thursday marked their final adoption on second reading - and its miserable end.

Most cases taken up by the Specialized Prosecution were either swept under the carpet or fell apart, with none of the high-profile ones ever successfully leading to a sentence. Suffice to say, the only corruption case brought to a tidy resolution was the guilty verdict handed out to the ex-mayor of Sofia's Mladost district. She also happened to be anti-GERB.

Švejk is alive and well

To give an example of what a travesty of justice the whole system was, I'd quote a lawyer who's always in the thick of it. In trying to explain, she referenced the timeless classic of Jaroslav Hašek and the moment the simple soldier Švejk faced a military court. While the judges busily hand out sentences amid indifference about proper justice, one of the clerks whispers to the judge "Your honor, we can't sentence innocent people to 10 years prison time. Innocent ones we can only sentence to 5 years max".

The road cartel is back. And it wants your money

Another of the relics of the GERB years, alas, is not going away anytime soon. The cartel of the biggest construction companies, which was the (not so) secret darling of Boyko Borissov's cabinet, has been pushing to get over 1 billion leva for 2 years now. The money is due because of road works ordered (uncompetitively) by the GERB government but not provided for in the budget. The regional minister wanted the Parliament to vote for that - presumably to wash his hands of the matter - but it defied his wishes. Now the Prime MInister Kiril Petkov says he is ready to pay half of that so that the companies stay off the streets and don't protest.

Is how finance minister Assen Vassilev called those contracts when he was a caretaker one.

Those are 2 urgent problems ticked off. 4 remain.

You can find out about the rest in our article from Wednesday.

will be Bulgaria's GDP growth in 2021, according to the new BNB report. The Central Bank is lowering its previous forecast for a 3.6% rise.

Is the growth of exports in February compared to the same month in 2021, according to NSI.BUSINESS

The company produces ecological packaging from engineered cellulose. The investment is part of a larger round of funding of 3.5 million euros, provided by the Swedish fund Almi invest and business angels.

Billa
Last year, the retailer sold more than 996 million leva worth of stock. This is an almost 4% growth. Billa invested 38 mln. Levs in opening 11 more stores and refurbishing 10 more. This makes it the largest retailer on the market, measured in store-points - 141. BRUSSELS

- The Commission proposed a legislative amendment under the European Maritime, Fisheries and Aquaculture Fund (EMFAF) related to the consequences from the War in Ukraine. It comprises financial compensation for additional costs, for income forgone and for the storage of products, as well as for the temporary cessation of fishing activities where they are currently unsafe.

- The Commission has also proposed a first-ever framework to protect the intellectual property for craft and industrial products that rely on the originality and authenticity of traditional practices from their regions. This framework will cover products such as Murano glass, Donegal tweed, Porcelaine de Limoges, Solingen cutlery and Boleslawiec pottery etc.

the proud owner and engine behind the idea of a "Bulgarian MIT" which came to fruition this week in Sofia. Vechev singlehandedly motivated the Swiss ETH Zurich and Lausanne-based EPFL to partner with Sofia University and then managed to secure a huge 80 mln euros investment, to match private donations from companies like Google. This is potentially a game changer for the Bulgarian education system and for the business R&D opportunities.

2025 according to a Ministry of Finance report, the state does not plan to increase taxes, health and unemployment insurances, as well as the minimum wage (currently at 710 BGN) at least until then.
Place Donetsk

the city in Ukraine, currently in Russian hands, was the site of a rescue for some Bulgarian sailors, who spent more than a month trapped on a ship in the harbor of the besieged city of Mariupul. After 49 days in danger, the sailors were brought out of the harbor by the advancing Russian army and Donbass rebels, who appear to be on the brink of capturing the city entirely.

On the eve of 12 April - the 61-st anniversary of Yuri Gagarin's first flight in space - Bulgaria, one of the few nations which has sent cosmonauts into Earth's orbit (during the late Soviet era) turned its gaze back upon the stars, when Innovations Minister Daniel Lorer said Sofia will restart its bid to join the European Space Agency. This means more opportunities for companies to join the EU space market, R&D projects and bid in competitive procedures and yes - probably Bulgarians in space at some point.

Anyone want to go into orbit?

"Well, after telling us about the salary rise, they also raised the prices in the canteen by 0.30 stotinki, which is a mockery. Complete mockery." Such was the angry rant of an employee in Liebherr's factory in Plovdiv, while explaining why the entire staff effectively went on strike this week.

It's a strange story.