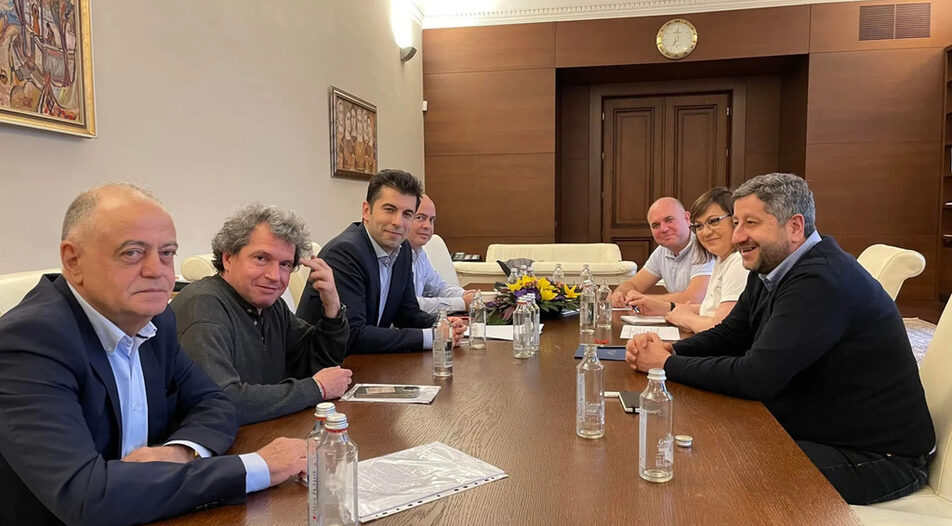 Houston, we have a (coalition and inflation) problem - but also a Resilience plan, at last

Houston, we have a (coalition and inflation) problem - but also a Resilience plan, at last

Ceaseless troubles for the ruling majority; more, yet pricier F-16s on the way & downgraded GDP forecast

"Floating majorities can easily turn into quicksand in which everything sinks." Those were the prophetic words of Democratic Bulgaria co-chair Hristo Ivanov after the second election in 2021, explaining why he and his faction would reject supporting a shaky coalition proposed by then-election winner TISP.

Oh, how words can come back to haunt you in politics.

At the time, Mr Ivanov claimed that a fragile majority formed by three ideologically divergent parties - like BSP, TISP and his Democratic Bulgaria - would fall into the trap of seeking parliamentary support for specific partisan bills or political appointments from the ex-ruling GERB and the Turkish MRF - the status-quo parties.

Well, now Mr. Ivanov is in power - exactly as a member of such a majority. And that's exactly what is happening.

The four parties of the ruling coalition seem unable to agree on any topic of national importance, while the mechanisms they agreed upon in order to cope with such situations during their cabinet negotiations in December of last year have proved redundant.

Presently, there are three such topics: what to do about N. Macedonia, who's going to be the next National Bank (BNB) governor and military aid for Ukraine. The first two issues intersected in a Facebook post of TISP leader Slavi Trifonov this week - his only mode of communication for months now. In his comment, the ex-TV host blamed Prime Minister Kiril Petkov for trying to subvert the coalition's common stance on N. Macedonia.

According to Mr Trifonov, Mr Petkov plans to single-handedly withdraw Bulgaria's veto on the start of Skopje's EU accession process and abandon all the country's demands regarding N. Macedonia, including human rights, as well as historic and language demands. The showman warned the Prime Minister that "there are things that cannot be traded - historic memory and truth".

Tellingly, at the end of this same Facebook status, Mr Trifonov goes on to blame Mr Petkov for trying to undermine the TISP nomination for governor of BNB, hinting that his outburst actually aims to strengthen TISP's hand in the heated battle of who will get to head the banking regulator.

TISP is still planning to get their appointment - Mr. Lyubomir Karimanski, through with the help of GERB and MRF. Such a daring move, in defiance of their three partners, would not only spell trouble for bank supervision, but cast a shadow over coalition relations.

The same goes for the pivotal issue of whether to supply arms to Ukraine, which has been tearing the coalition apart since the first day of Russia's invasion. Last Sunday, Democratic Bulgaria said that Parliament would approve a bill for the cabinet to send munitions to the besieged nation, despite the opposition of their Socialist coalition partner (read as: with the help of GERB and/or MRF) within this week. Yet, this promise failed to materialize - likely due to undisclosed BSP opposition. The same goes for the proposal to render Russian Ambassador Eleonora Mitrofanova persona non grata by the government, threatened (but also not realized yet) by Finance Minister Assen Vassilev.

Things look set to get worse - BNB is only the first of many key posts that need to be filled in the coming months, including the new head of the Anti-corruption Commission, CEO of the National TV and presidents of the anti-monopoly and media regulators. The quicksand, to cite Ivanov's unfortunate metaphor, will only get deeper.

Trust in cabinet, parliament falls off the cliff

The aforementioned problems do not help the ruling coalition and its members fulfill public expectations. According to a Market Links survey published on Tuesday, if elections took place today, WCC would come second (with 19.7 percent of the vote) to GERB's (22.1 percent).

To be noted: that is not because Boyko Borissov's party (or the ex-PM himself) are winning support. More like WCC has lost some, yet not as much as TISP, which falls off a cliff.

The other coalition parties have also lost public trust, while the only significant gain is for radical pro-Russian Vazrazhdane, which has doubled its support to 8.2 percent.

Overall trust in the executive and Parliament is also down compared to January, by 10 percent (from 36 to 26) and 7 percent (from 22 to 15), respectively.

War supplies? How about some helmets?

Despite the words of Democratic Bulgaria co-chair Atanas Atanassov on Sunday that the ruling majority in Parliament has managed to gather enough support for a motion to send Ukraine military aid, the motion never entered the weekly program of the National Assembly.

On Wednesday, cabinet spokesperson Lena Borislavova announced that Sofia would send 2,000 helmets and 2,000 flak jackets to civilians in Ukraine, and also allocate funding for the International Criminal Court for the investigation of war crimes in Ukraine. The move was largely described as "shameful" by liberal intellectuals.

F-16s: getting more expensive, even as they keep on not arriving

The US State Department approved the parameters of a second Foreign Military Sale to the Government of Bulgaria of eight F-16 C/D Block 70 jets. Contrary to expectations within Bulgarian political circles, the US' offer for a similar number of combat aircraft is higher (1.673 billion USD) compared to the first deal that was completed in 2019, when Sofia paid 1.256 billion USD in advance for the delivery of 8 planes, which are still to be produced.

The offer also leaves a rather bitter taste compared to a similar deal, albeit for "second hand" jets, which a NATO ally struck with neighboring Romania (notwithstanding the fact, that we won't see a new plane for some years more). Read more about it - and the possible alternatives - in our analysis from Thursday.

On Monday the Supreme Judicial Council once again broached dismissing Mr Geshev over nine pretexts described by Justice Minister Nadezhda Yordanova (Democratic Bulgaria) in her first weeks of office. Mr Yordanova's accusations, however, appear likely to fall on the deaf ears of the majority of the 24-member council, which is politically appointed by the status-quo parties and has already shown its attitude to Prosecutor General Ivan Geshev, when it voted him in power not once, but twice in 2019, by an overwhelming majority.

For a broader analysis of how the long-awaited justice reform is progressing, check out our Wednesday piece.

One up for the government: the recovery and resilience plan is finally approved!

Yes. It's been a year since the deadline for submission of RRPs by EU 27 and Sofia finally got a nod from Brussels. Ursula von der Leyen arrived in person to hand the document to the smiling Mr. Petkov, who promised the plan would signify an investment of 6 bln euros into the Bulgarian economy in the next 4 years. "It's an outstanding plan" said the Commission president, probably a little relieved that almost all of RRPs are now in.

What are we spending on?

Quite a lot. There will be several highlights:

Auctions: one failed, one to go

The state failed to raise 500 million in debt due to low interest and high yield. During the Monday auction for 10.5-year government securities, the declared interest was only 452 million levs, which is happening for the first time in many years. That's why the government decided to schedule a new auction for 11 April. It would still seek to sell government bonds worth 500 million levs, but for debt securities with shorter maturity with higher yields.

A question: what about the 4.5 bln euro in loans under the RRP?

Not a word has been said by Bulgaria up to now. We have until August next year to decide on it.

will be Bulgaria's GDP growth in 2022, according to the spring macro forecast by the Finance Ministry. It predicts also

average annual inflation for the year

According to Unicredit Bulbank, inflation may even reach

Of all major state infrastructure projects, only the highway to Serbia will be ready by 2026. The railway connection Sofia - Burgas, highway "Hemus", highway "Struma", "Black Sea", the road Ruse - Veliko Tarnovo, as well as the construction of tunnels under Shipka and Petrohan should at least be ready by 2030.

Mergers and acquisitions have fallen to their lowest level since the pandemic. Refinitiv data show that M&A fell 23% in the first quarter of the year. The total value of the deals for the period is a little over 1 trillion dollars.

SAV Fund The SAV Fund is looking for artificial intelligence companies to invest in 600 thousand euros. The window is open until the end of May, as the financing will be provided on a convertible loan, which becomes part of the company's capital at a later stage.

Maya Manolova - the fiery opposition politician and ex-ombudsman, who became famous for her committee for investigation of GERB's rule, wants to be in Parliament again. So she is registering the left-wing "Rise up!" party on the 1 May.

Parliament - The National Assembly ought to be voting on the next National Bank governor at some point next week, but this might break the coalition.

OfficeRnD - check out KInsights' profile of the Bulgarian company for managing co-working spaces, which raised 10 million dollars on a valuation of around 50 million dollars.

This is now the favorite word of Bulgarian Russophiles and one of the slogans used by pro-Russian radicals from Vazrazhdane during their second "anti-war" protest this week. Of course, all of them oppose brotherly bloodshed, but only if the end of hostilities includes Ukrainian capitulation - as soon as possible. They don't believe there is "war", but rather a "special military operation" for supposed denazification carried out by the Kremlin on Ukrainian territory. Yet, at the same time, they believe that if Bulgaria sends weapons to Ukraine, it is taking a side in the war. And, of course, they are neutral and against foreign flags waved during Bulgarian protests, but they themselves wave Russian flags. Such is the Orwellian world Bulgarian "neutralists" inhabit.

"Floating majorities can easily turn into quicksand in which everything sinks." Those were the prophetic words of Democratic Bulgaria co-chair Hristo Ivanov after the second election in 2021, explaining why he and his faction would reject supporting a shaky coalition proposed by then-election winner TISP.