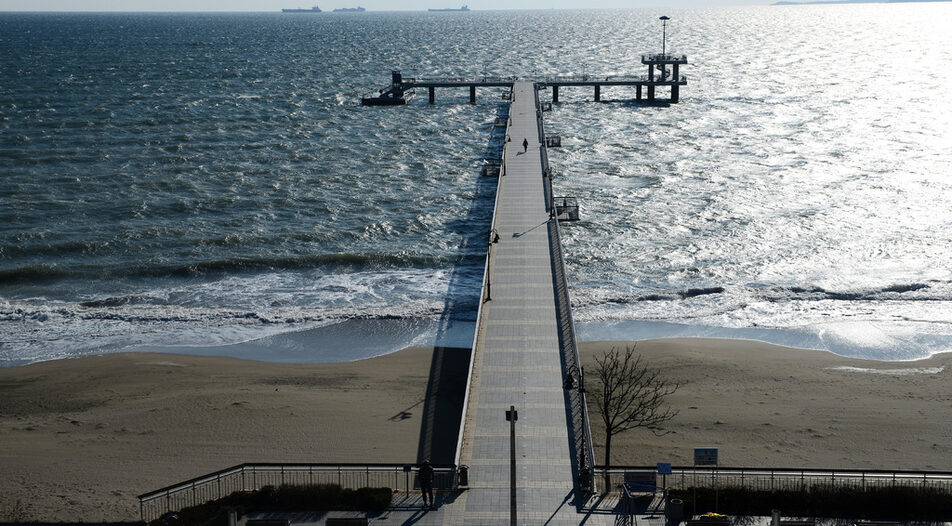 The week: The closed sea, the doubling of the toll system and the end of the pandemic

The ships still roam the sea. For now...

The week: The closed sea, the doubling of the toll system and the end of the pandemic

K insights: we look for good city ideas to finance and we have a special report on the Tech sector

The ships still roam the sea. For now...

Bulgaria on 3 seas. If you are a regular reader of this newsletter, you probably know that this is the favorite slogan of Bulgarian nationalist groups. It refers to the mythical medieval time when the kingdom bordered the shores of the Black, the Adriatic and the Aegean seas, an era mourned by 'Bulgaria firsters'.

Lately, it seems we're now on the verge of losing the last of the three. Not literally, of course, but in the commercial or pragmatic sense. It's a sad twist of fate that the culprit is Russia - the longtime darling of Bulgarian nationalism.

After a month of war in Ukraine, the Black Sea seems more Russian and more expensive than ever and almost closed. The sea mines found drifting across the Black Sea were just the latest drop in an escalating curve of trouble.

It's now impossible to venture into the northern part of the sea, and insurers draw the line behind which they don't work ever closer to the Bulgarian shores. Yet even in the zones where they do offer insurance, it's still a lot more expensive. Right now, according to estimates from the market, it is 2 to 3 times more expensive to transport goods than it was six months ago.

Ukrainian ports are no longer operating, so the Romanian ones are blocked with goods then transferred to rail and trucks to Ukraine. Yet the port of Constanca is almost on the danger line. The port of Varna, where a lot of the industry gets deliveries (and which Bulgaria invested 200 million euros to deepen, paying a Russian company) is operating for now, but it could only take a mine or two to change this.

Then consider the worst possible outcome - a complete blockade of the Bosphorus, which would be a disaster for all countries bordering the sea.

Еxcept maybe for Russia. Yes, because Russian ports are operating and Russian ships are running. This is good news for the Bulgarian economy for now, because Russian oil keeps flowing in. Yet if we decide to change it (and diversify from Lukoil), this is probably not the best possible time to do it.

So in a matter of weeks, the Black Sea has turned from a major positive for the Bulgarian economy into a major weak point. Wars have a way of making such flaws visible. This means Bulgaria needs to start thinking about a second sea - not in a military sense, but in a commercial one. This has already started with the gas interconnector to Greece and the decision to participate in the bidding for the Aegean port of Alexandroupolis. Expect a lot more in that direction.

Yes, after a short hiatus due to the more pressing issue of war in Ukraine, the topic of N. Macedonia and its EU future returned to the table this week. The reason: a fairly optimistic comment made by Prime Minister Kiril Petkov during a meeting of four Balkan NATO leaders in Sofia on 28 March.

He hinted that he expects "speeding up" of the EU accession process for Skopje, alongside other Western Balkan states, which was immediately interpreted as the long-awaited betrayal of Bulgaria's national interest that nationalist politicians have been warning us about since Mr Petkov took office.

It was due to the results of the Macedonian National Census. It showed only about 3,500 people officially register as members of the Bulgarian minority (almost as many as the Egyptians in the census).

A memorandum signed by the cabinet and what was described as a British-American consortium between the Gemcorp Capital Management Ltd. and IT3 funds, which foresees a 1 billion USD Western injection into the Bulgarian energy sector, caused significant tremors this week. The investigative website BIRD.bg published information that linked Gemcorp to the sanctioned Russian oligarch Albert Avdolyan.

Things got worse after Finance Minister Assen Vassilev said four days later that the cabinet was introduced to the two funds by the US Embassy which distanced itself from such claims on Thursday, according to a letter sent to bTV.

Even if the claims of warm Russian connections are disputable (as one of the people involved with Gemcorp, Atanas Bostandzhiev, claimed in an interview with Capital weekly), the public handling of the whole story leaves a bad taste in the mouth.

Access to some Russian media, including TASS and RIA Novosti, turned out to be restricted by the three Bulgarian telecoms - Vivacom, A1 and Yettel, Capital weekly found on Thursday. This happened without public knowledge or announcement. The story is even stranger because in practice no one knows who gave the word for the restrictions. According to the telecoms, access was stopped because the sites were part of a list of 45 thousand addresses blocked at the end of February by the General Directorate for Combating Organized Crime and the Ministry of Electronic Government, but the latter rejects such claims. ECONOMY

Not the ones you might expect, though. Instead of going after the big names in the sector, which for years have been engaged in an obvious cartel, the prosecution service has started investigating middle-sized companies from Pernik, Montana and Sofia, which have bought professional equipment with EU money and then used it to build "TurkStream".

The amount of toll-taxed roads will double from 1 July

All the 2-grade roads in the country will cease to be free for heavy trucks, which will close a major loophole in the Bulgarian toll system. The system still is receiving more money from vignettes, than from toll taxes, claims the Regional ministry.

32.3% is the Industrial inflation in February, compared to last year. The biggest rise is in energy prices. BUSINESS

The start-up media platform has attracted a 450 thousand euro investment. The 6 private investors are led by Hellen's Rock fund and HR Capital. The goal of the new funding will be to allow The Recursive to cover more of the Balkan tech scene, Greece in particular.

The company, which is part of the Turkish Kastamonu Entegre, is set to invest 60 million levs this year in new business in Bulgaria. The investment is part of a bigger - 100 million euro project designed to expand business.

The company which operates on the Eastern Mediterranean market, enters Bulgaria. It offers mainly short cruises and is part of Louis Group, which manages hotels in Cyprus and Greece.

Nexo
The crypto bank created a 150 million dollars investment fund. Nexo Ventures is targeted towards blockchain companies, NFT and meta universe. It will invest in Web3 technologies. SPECIAL REPORT This year we're bringing you deep dives into different sectors of the Bulgarian economy. We start with the Tech sector - the fast-growing darling of politicians and statisticians (because of the very high salary level which raises the overall stats). If you are interested in the deals, the players, the tech scene and the trends - this is the report you've been looking for. We also kinda promise to find the next unicorn, mind you.

Petko Nikolov - the longtime chairman of the competition commission is the new head of the state-owned "Industrial zones", which manages the zone next to Sofia.

1 April - today is the official end-date for the pandemic in Bulgaria. The government dropped the emergency situation which was in place since 2020 and this means most of the measures are now gone.

The three Balkan cities are now officially connected to Sofia through regular Gullivair flights. The new Bulgarian Air company also plans to launch a Sofia-New York line at some point.

While it may sound like a dating website, this is our own city competition which will run for a second year, thanks to the British embassy. The lovely people there are supporting yet again our intention for awarding the best city ideas for improvements in the environment, cityscape, quality of life and clean air. Everyone can participate in the competition and it aims to fill a gap in the Bulgarian financial landscape - no one gives money to individuals, groups or even companies for city-improvement projects, if they are not approved by the municipality. Well, here we are. Good luck!

Bulgaria on 3 seas. If you are a regular reader of this newsletter, you probably know that this is the favorite slogan of Bulgarian nationalist groups. It refers to the mythical medieval time when the kingdom bordered the shores of the Black, the Adriatic and the Aegean seas, an era mourned by 'Bulgaria firsters'.

Lately, it seems we're now on the verge of losing the last of the three. Not literally, of course, but in the commercial or pragmatic sense. It's a sad twist of fate that the culprit is Russia - the longtime darling of Bulgarian nationalism.