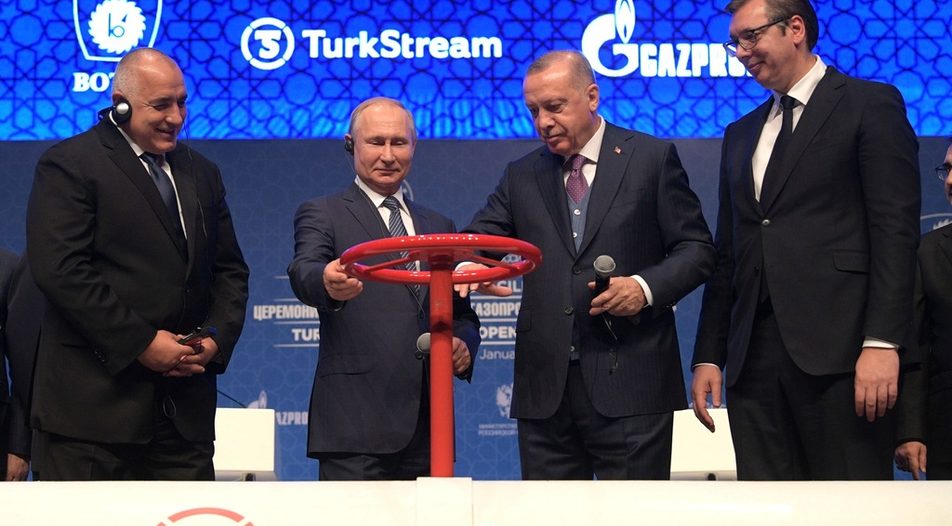 The week: The gas is off, the fight is on, Petkov goes to Kiyv, and do you need that salary of yours

Once upon a time: the Bulgarian PM (on the left) Boyko Borissov smiles at the launch of "TurkStream". It is, said Borissov, the moment of "energy independence'

The week: The gas is off, the fight is on, Petkov goes to Kiyv, and do you need that salary of yours

K Insights 29/04: legalizing the industrial hemp, are 100 diplomats too many?

Once upon a time: the Bulgarian PM (on the left) Boyko Borissov smiles at the launch of "TurkStream". It is, said Borissov, the moment of "energy independence'

Yes, I'm paraphrasing Comrade Lenin here, but for a good reason. For Russia has played an enormous role in recent days in Bulgarian politics. Yes, you all probably already know: the Russian gas has been turned off. The last time that happened was in 2009 and for a few days. There are, however, a few notable differences this time.

First of all, while the President and the Socialist party, and the opposition from GERB have all bent over backwards in an effort not to usher a word of reproach for the company that basically broke the contract - Gazprom - the PM and the finance minister have stood tall and announced Bulgaria is "not giving in to blackmail".

That is, I admit, a novel transformation. We've become used to the obsequious, subservient attitude of Bulgaria's political class towards Moscow (evidence 1 above: a smiling Bulgarian PM together with Putin on the launch of TurkStream, which was supposed to "make us independent"). To suddenly realize there is another option is a revelation. It comes with a price: roughly 20-30% premium on what we pay now and we're still to see how it will affect the industry. Yet, as in any other situation in life, you tend to always get a better deal when you're standing up, rather than on your knees. And Gazprom's contract is running out this year.

The government has effectively promised to replace the Russian gas with other sources. This is rather easy in summer time, when no heating is on, but what about in the long term? Here, things are also not looking as bad as they were thought to be.

First of all, we have the Azeri gas contract (from Azerbaijan for 1 bcm per year - Bulgaria uses around 3). Second, they've come up with an ingenious trick to fill the pipes where Russian gas used to run with other gas. And here is the main riddle: in order to acquire that gas at any affordable price, the EU must step in.

For years, Brussels and other capitals have considered Sofia to be too much in thrall to Russia. Now that Bulgaria has shown itself willing to sustain a sharp blow from Moscow, it is up to the EU to deliver assistance and solidarity. If they manage to do that, and Sofia ends up getting enough gas at a reasonable price this will be a surprise double win: public opinion towards the EU will be much more favorable and Bulgaria will suddenly end up free from gas blackmail.

To get there would be a long and arduous road (read more below). For the moment, it is still a knockdown. But definitely not a knockout.

This newsletter was created with the help of

The tremblings of Rumen Radev

The Russian gas stoppage and the mass hysteria around weapons for Ukraine, resulted in an unexpected outburst by President Radev against both We continue the change party (which backed him in the last elections and has been considered close to him) and the Socialists (which nominated him in the first place).

Mr Radev blamed the Petkov cabinet for the halting of Russian gas transit to Bulgaria and accused the government of taking Ukraine's side, asking why Bulgarian arms were reaching the country invaded by Russia. The second accusation basically targeted Economy Minister and BSP leader Kornelia Ninova, who is responsible for issuing weapons export permits.

The surprise reaction was that the ruling coalition actually united. Ms Ninova herself blasted back with a Facebook status (a frequent weapon of hers), saying Mr Radev's caretaker cabinets did the same with arms exports.

And WCC, which until Wednesday was mostly trying to balance out different interests and refused to take a clear stance, gave a momentous press conference. The party's co-chairman and Finance Minister Assen Vassilev was loud and clear: Mr Radev's position, he said, "is disgraceful because implicit in it is the understanding that Russia will win this conflict, that it is normal and good for Russia to win this conflict. I believe that Ukraine will win in this conflict and that we should help Ukraine to win," he said.

Vassilev added that "the policy of sitting back and pretending that there is no aggressor has come to an end". So WCC will clearly support the parliamentary motion for military aid to Ukraine next week.

Good question. The possibility of BSP leaving the coalition if (or rather - when) Parliament approves military aid for Ukraine next week remains. But it has significantly receded. No party really wants elections now, but all of them appear to be preparing for one, too. We're in uncharted territory. Yet if they manage to ride out the gas storm, this government will stand a much better chance of surviving for a longer period.

The Bulgarian Prime Minister meanwhile left all of this behind and visited the besieged country's capital and its suburb Bucha, the site of one of Russia's atrocities during the first part of the invasion. Sofia "can't remain impassive at the sight of this tragedy", said Petkov.

At his meeting with Ukrainian President Volodymyr Zelensky, the Bulgarian PM promised him that the state-owned Terem military factory can repair damaged Ukrainian heavy weaponry, while the port of Varna can be used as an export hub for Ukraine grains. In return, Mr Zelensky offered to supply Bulgaria with cheap electricity and help it diversify its gas supply via the Trans-Balkan gas pipeline after Gazprom suspended deliveries on Wednesday.

Are 114 diplomats too many?

Oh, and Mr Petkov's visit to Kyiv produced one more piece of news: "How is it possible we have 114 Russian diplomats as part of their mission? What did these 114 people do to strengthen our ties or to prevent the one-sided reading of the [gas deliveries] contract that led to Russia stopping the gas? I really wonder what all those people do in Bulgaria," Petkov exclaimed. Some people in the Russian embassy would appear to be heading for the door. ECONOMY

No, not that kind of weed, though. Industrial hemp should be legal to grow and use in Bulgaria, say 4 of the parties in Parliament. It is now legal to grow the culture, which has many economic properties, but you can't handle or process it. That's why most Bulgarian farms export it to neighboring countries.

Bln. levs (39 bln.euros) in household savings are in the Bulgarian banking system in 2022, which is a 6.5% growth on annual basis.

Inflation rate this year is the grimmest prediction yet about the Bulgarian economy. It comes from WIIW, although for now it is around 12.4% and KBC bank group thinks it will be around 11%.BUSINESS

1.08 billion levs in revenue for the telecommunication group in 2021, show the latest report. That's a 6% growth, yet it's not enough to earn first place - A1 has more revenue for the first time in 15 years. BTC EBITDA is 452 million levs. BTC (known commercially as Vivacom) is owned by United Group.

The company, owned by Ginka Varbakova - the Pazardzhik-based business woman who wanted to buy CEZ at one point - has the largest operating solar park in Bulgaria. It has 58 MW in capacity and is planned to reach 150 MW.

Following the announcement by Gazprom on the disruption of gas deliveries to Bulgaria, Bulgaria's Deputy Prime Minister Assen Vassilev had a series of meetings in the Commission. As a result, the European Commission and Bulgaria agreed to set up a first regional taskforce in Sofia, as part of the EU's Energy Purchase Platform. This pilot will look at gas and electricity needs, prices and flows, as well as infrastructure aspects and decide how to escape from Russian dependency.

Desislava Dimitrova - the former candidate for minister in one of the unsuccessful attempts last year announced a new party - Razvitie ("development") and gathered together other former unsuccessful politicians connected to Slavi Trifonov's party. Their main topic? Opposition to weapon deliveries to Ukraine.

1 May - Bulgaria officially drops its requirement for a Green Certificate when entering the country. You are most welcome!

Gabrovo The "Bulgarian Manchester" is one of the Bulgarian cities included in the 100 EU cities that will participate in the EU Mission for climate-neutral and smart cities by 2030. The Cities Mission will receive €360 million of Horizon Europe funding covering the period 2022-23, to start the innovation paths towards climate neutrality by 2030. The research and innovation actions will address clean mobility, energy efficiency and green urban planning, and offer the possibility to build joint initiatives and ramp up collaborations in synergies with other programs. The other participant from Bulgaria is Sofia, which is rather strange - in the beginning the capital wasn't intending to participate, and the only city that wanted to - Burgas, is not in the list.
Word of the week

This is more a fail of the week. On 25 April, Prime Minister Kiril Petkov did by far the most unpopular thing in his short political career. He wrote a Facebook status calling for ordinary Bulgarians to donate "one monthly salary" to the Ukrainian war effort by sponsoring the Ukrainian army. It was a ridiculous and rather absurd message from the PM of a country where 24% of the population live under the poverty threshold and where inflation exceeds 12%. He even posted a wrong bank account at the beginning, suggesting that this was a rather spontaneous post.

One explanation for that outburst was the constant barrage of criticism from the city-liberal elite, which took to Facebook recently to mock and accuse Petkov of weakness and lack of courage. It seems he forgot momentarily at least, that as PM he speaks to the whole nation and this message will be widely viewed as a tasteless joke from a leader who can't even state we're delivering weapons to Kiev.

As a result, the hashtag #OneSalaryForUkraine became a rallying call for all: left and right, liberals, socialists and conservatives, city and rural. Petkov will probably need to sleep a bit more. And maybe a PR?

Yes, I'm paraphrasing Comrade Lenin here, but for a good reason. For Russia has played an enormous role in recent days in Bulgarian politics. Yes, you all probably already know: the Russian gas has been turned off. The last time that happened was in 2009 and for a few days. There are, however, a few notable differences this time.