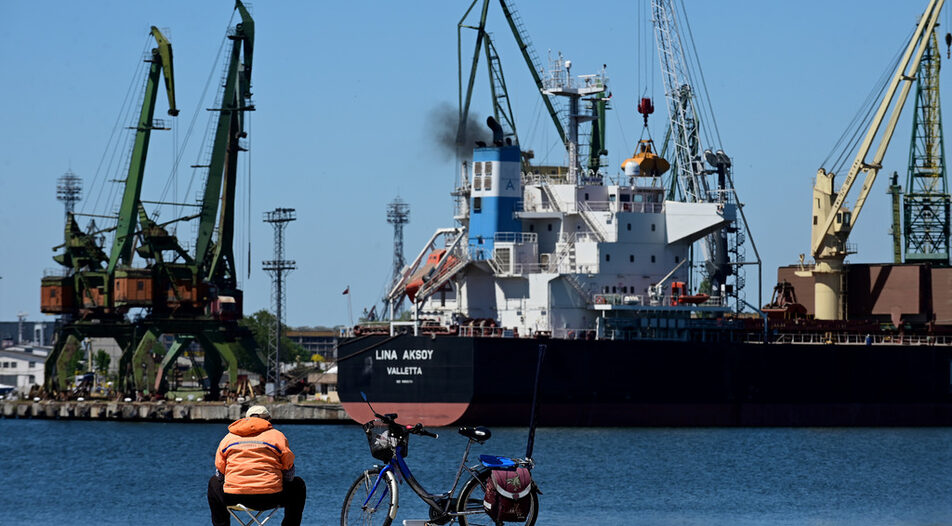 The naval blockade of Ukraine has led to a change in the main cargo route in the Black Sea.

The naval blockade of Ukraine has led to a change in the main cargo route in the Black Sea.

Ever since Russia launched its invasion of Ukraine almost two months ago, it has been clear that one of the primary goals of Moscow in the war would be to shift the balance of power in the Black Sea region in its favor. And where there is war, merchant shipping suffers.

On the second day of the Russian invasion, Turkish bulk carrier Yasa Jupiter was hit by a missile off the coast of Ukraine's Odessa. Two similar incidents followed, involving Moldovan chemical tanker Millennial Spirit and the Namura Queen, owned by Japan's Nissen Kaiun. To make matters worse, sea mines started surfacing off the Bosphorus, near the Bulgarian-Turkish border and in Romania a month into the war. The psychosis was only exacerbated by Russian information that the number of free-floating mines was quite significant - 420.

So far, the war seems to have affected cargo flows only in the north of the sea. Shipping in its southern part goes on undisturbed and the Bulgarian firms that have their supplies imported through this area continue receiving them. But almost two months into the war, the Black Sea is looking increasingly Russian and more expensive. The war in Ukraine has also shown how vulnerable and dependent Bulgaria is, not only in terms of the origin of raw materials, but also in terms of transport solutions.

Clogging of the ports

Russia's invasion of Ukraine has led to the closure of Ukrainian ports. All commercial operations in the seaports were swiftly suspended on the orders of the Ukrainian military. Russia also stopped commercial shipping in the neighboring Sea of Azov.

Insurers and maritime security consultancies such as Dryad Global have advised all commercial operators to avoid any transits or operations within the exclusive economic maritime zones of Ukraine or Russia in the northern Black Sea. In early March, Lloyd's Joint War Committee expanded its list of conflict risk areas to include the entire Sea of Azov and the entire North Black Sea beyond the border of Romania with Ukraine, to south of Sochi, near the border with Georgia, including Russian ports in the east. This means that, based on the contract with the insurer, ships either cannot move into the risk zone at all or it will cost them dearly.

The naval blockade of Ukraine has led to a change in the main cargo route in the sea. In early March, the Romanian port of Constanta which practically serves as an EU gateway to the Black Sea with its record 67 million tones of cargo serviced in 2021, announced that it was taking on additional traffic of 6-7 thousand containers a day that can no longer reach Ukraine's ports - mainly Odessa. To facilitate the transfer from Constanta to Moldova and Ukraine, Romanian authorities created emergency "green" duty-free corridors for road transport. Romanian media reported traffic jams at Constanta in March, as well as the existence of a waiting list for ships, mostly carrying food and other goods for Odessa, which remains under Russian blockade.

Maritime consultants from Windward have reported that the suspension of liner services to Ukrainian and Russian seaports is having an even wider effect, with ports as far afield as Cyprus, Bulgaria, Latvia and Finland seeing congestion increase by 40-80 percent. According to the World Bank Spring Economic Update, trade through the Black Sea has already been severely disrupted, with dry bulk vessels at Ukrainian ports down 82 percent in early March relative to the month prior, while maritime calls to Russian ports have declined nearly 45 percent since the start of February.

Having cut off Ukraine by sea, Russia has left its own ports in the Black Sea open to shipping, and its raw material exports leave the country. Russian cargo turnover data for 2020 shows that the Black Sea-Azov Sea region accounts for the largest volumes of its exports, followed by Baltic Sea ports and those in the Far East.

The port with the largest cargo turnover for Russia is Novorossiysk on the Black Sea with nearly 143 million tons of cargo per annum. It has always been a key port for Russian oil exports towards the Mediterranean. Of the country's top 15 ports in 2021, five are positioned in the region, including the Port of Taman and the Port of Kavkaz, from where a large part of propane-butane supplies to Bulgaria's Varna arrive by a rail ferry. In other words, the Black Sea-Azov basin is essential for Russia and the raw materials have not stopped arriving. The Ukrainian ships are blocked, but the Russian ones keep sailing.

"We are working according to our production plan and receive regular supplies from Russia," a representative of Lukoil Neftochim refinery in Burgas told Capital Weekly. Other large companies relying on Russian supplies, Gastrade and Bulmarket, also said they have received their supplies of propane-butane from the port of Kavkaz by ferry, but under new, higher prices.

Representatives of companies operating in the region and analysts alike report that insurance premiums for war risk travel through the Black Sea have skyrocketed, while some insurers no longer cover travel in the area at all. In the words of Bulmarket owner Stanko Stankov, gas carriers in particular are refusing to enter the Black Sea.

The ferry line between Varna and the Port of Kavkaz now operates with one less ship, as the Bulgarian one - the Varna, co-owned by the Domuschiev brothers Kiril and Georgi, and Chimimport - had been suspended at the beginning of the war. Only Russian ferries Avangard and Slavyanin owned by Anship, remain serving the route. According to experts, the reason for the suspension of the Bulgarian ferry was the lack of an insurance policy with a war clause due to the very high price demanded by the insurer. Thus, the cost of the shipment became $175,000 per crossing, which amounts to extra $120 per ton of cargo - 2.5 times more expensive compared to the pre-war rate. Such an increase of expenses has practically rendered the shipment pointless, according to sources from the business.

There is also a price increase for transport by Russian ferries, but because they use their Russian insurance, it is considerably smaller - $50 per ton on top. That is, in addition to the fact that transport in the Black Sea has become more expensive, it has become even more dependent on Russia.

The war caught the Bulgarian state unprepared in more than one way - Gastrade gives an example with its unfinished propane-butane port at the Beloslav Lake west of Varna. Administrative obctacles posed by the state and the municipality have been thwarting the company's attempts to construct mooring facilities at the site for 20 years. The port could have provided Gastrade with an opportunity to receive crude gas carried by tankers as we speak, and not by Russian ferries from the Port of Kavkaz.

If the sea shuts down

All the problems described so far, however, are insignificant compared to the risk that shipping might stop altogether - whether because of floating mines or other unexpected effects of the war.

"In case shipping in the Black Sea gets blocked - we close the plant," Philip Rombaut, CEO and co-owner of the Agropolychim fertilizer plant in Devnya told the Capital Weekly. "This won't happen immediately, as we have some reserves to maintain production for some time. But we won't be alone. We are talking about millions of tons of cargo blocked, and this will have a detrimental effect on the entire industry - production and trade in non-ferrous metals - copper, zinc. There is no alternative to maritime transport for this whole sector at the moment."

According to Mr Rombaut, a transport crisis in the Black Sea and the Bosphorus could affect millions of people in the Arab world, as the countries of this region are traditional buyers of wheat from Ukraine, Bulgaria and Romania, which is transported by sea. The World Bank also warns that economies in the Europe and Central Asia region are among the top ten countries in the world most dependent on wheat imports from Russia and Ukraine, and four are among those dependent on fertilizer imports from Russia, which means that a crisis in the Black Sea could lead to increased food prices in the region, followed by higher food insecurity and poverty.

Mines and other trouble

According to the CEO of Agropolychim, Bulgaria ought to request help from the EU as soon as possible, since Bulgaria and Romania will be hit the hardest by a possible blockade of shipping in the Black Sea. "What we are seeing now, however, is that the risks are not being adequately managed. We cannot rely solely on fishing boats to spot mines by chance and signal for its disposal. There are entire systems based on drones that successfully detect and defuse mines. As far as I know, the best of these are manufactured in Belgium and the Netherlands, and they are now in service in Germany," he claims.

According to Capt. Plamen Prodanov, manager of Varna-based Cosmos Shipping, shipowners have to clarify their insurance policies with the companies providing them. If they already have a special clause in the contract about the conditions of passage through areas of hostilities, there are two options. In case this clause does not allow the shipowner to pass through areas where there is a danger of the vessels hitting mines, the captains are told to stop sailing, return, or anchor until the area is cleared.

"In the case of our ships, there is an explicit clause in our contract that they cannot move north of a certain line in the Black Sea. After that, the insurance lapses," he says. A second option is for the insurer to allow the ship to continue on its course, but at an additional, high risk charge.

According to Capt. Prodanov, the defense ministries of Bulgaria and Romania ought to take an active role with regards to the sea mines. "They should start constant monitoring of the movement of these mines, be able to determine their exact coordinates at any moment and inform about their trajectory in round-the-clock messages to seafarers," he concludes. So far, the Bulgarian Defense Ministry has no such plans.

Ever since Russia launched its invasion of Ukraine almost two months ago, it has been clear that one of the primary goals of Moscow in the war would be to shift the balance of power in the Black Sea region in its favor. And where there is war, merchant shipping suffers.

On the second day of the Russian invasion, Turkish bulk carrier Yasa Jupiter was hit by a missile off the coast of Ukraine's Odessa. Two similar incidents followed, involving Moldovan chemical tanker Millennial Spirit and the Namura Queen, owned by Japan's Nissen Kaiun. To make matters worse, sea mines started surfacing off the Bosphorus, near the Bulgarian-Turkish border and in Romania a month into the war. The psychosis was only exacerbated by Russian information that the number of free-floating mines was quite significant - 420.