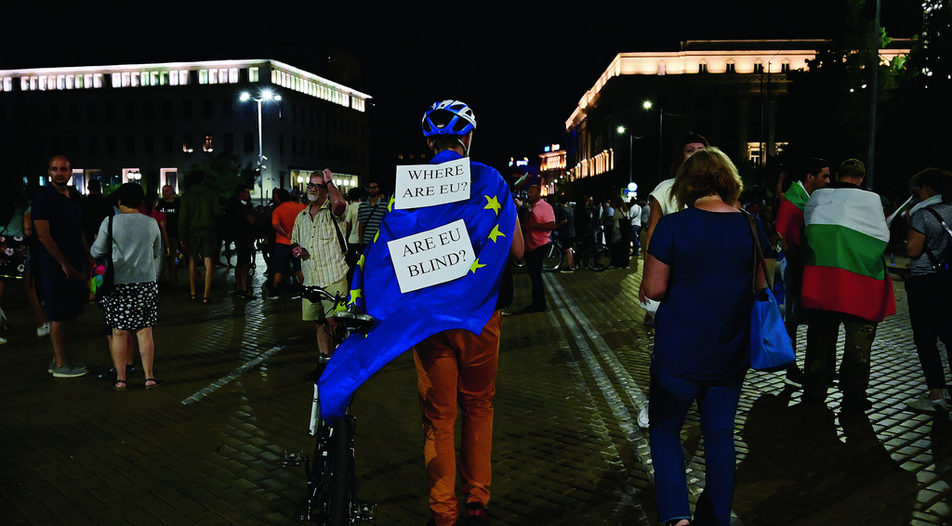 The EU faces a conundrum: either get tough on Boyko Borissov or accept his "Orban lite" model

It appears that Mr Borissov's EPP political family is reluctant to give up on him just yet, but it will only get harder for it to turn a blind eye to Bulgaria's problems

For years - in fact, for over a decade - the EU has been lenient, to say the least, with Prime Minister Boyko Borissov's Bulgaria. Almost from the start of his rule in 2009, it was blindingly apparent that Brussels ought to be very worried. Reasons ranged from the series of police operations that violated the basic rights of alleged (and rarely convicted later on) criminals carried out by ex-GERB lieutenant Tsvetan Tsvetanov, through the concentration of media ownership in the hands of one politician, to the blatant misuse of European funds.

Yet very little has been done to address these deep-rooted problems. On the contrary - the EU seemed to largely ignore them. The close political ties between the parties of Mr Borissov and the ex-head of the European Commission Jean-Claude Juncker mean that the EU's executive barely seemed to notice the scandals and corruption allegations looming daily. In fact, Mr Juncker almost dismantled the only mechanism for political pressure over Sofia, the half-baked Cooperation and Verification Mechanism (CVM), which was installed in order to ensure that Bulgaria would live up to its unfinished rule of law commitments during the EU accession process. Only once - and this was during the Socialist-led administration of Plamen Oresharski (2013-2014) did Brussels freeze a significant portion of EU funding dedicated to Bulgaria.

This is due to several factors. Most importantly, Bulgaria is in the periphery of the EU - geographically, as well as economically, and does not cause as much trouble as some other problematic states such as Hungary and Poland. "The most significant advantage of Bulgaria before Poland and Hungary is that Borissov is less ideologically toxic. The other two do themselves a disservice when they wage a culture war with the West, getting xenophobic, homophobic and anti-Semitic," says Christian Oliver, deputy head editor of Politico - Europe. "In many ways, Borissov is a better political player than the Hungarians and Poles, because he says what others want to hear. He knows that Brussels and the leading EU states would let him do what he wants this way," he adds in a commentary for Capital weekly.

This is a widely shared opinion. "It might sound cynical, but if Brussels expects problems with Eastern Europe, in their view Bulgaria is not a problem - it's a solution," historian in the field of Eastern Europe Tom Junes told Capital weekly. And Mr Borissov's most vocal domestic opponents are well aware of that systemic deficiency of the EU. "If you are Merkel, you have plenty of problems on your plate. Borissov is obliging, he knows perfectly well how not to become a problem, you don't expect much of Bulgaria anyway - in your world Bulgaria is between the Yugoslav wars and the Greek financial collapse - what do you expect it to be? It is going to be corrupt but thank God it is peaceful," Hristo Ivanov, co-chair of the Democratic Bulgaria coalition told The Guardian in August.

Mr Borissov's political savviness also helps. While he is very far from a successful or even willing reformist, he is definitely a political survivor who is capable of transforming almost any situation to his advantage. One recent example is how he tackled the July negotiations for the upcoming long-term EU budget. There, Sofia was allocated 29 billion euro in cohesion money and as part of the post-pandemic recovery plan of the EU. While Bulgaria will disproportionally benefit from the former funding stream, this is not due to the successes of the government.

On the contrary - it is due to the inability of certain Bulgarian regions to catch up with the rest of the EU that makes it eligible for extra funding. How did Mr Borissov play this out? "For the people who want my resignation I leave 29 billion euro for the next nine years," he told reporters, using the opportunity to visit Brussels for the negotiations to downplay the anti-graft protests he faced at home.

The same goes for his commitment to energy diversification: while working tirelessly to complete the construction of the Bulgarian section of the Turkish Stream pipeline project that would mostly benefit Russian energy interests, he persistently tries to deny the allegations that it is a Russian project. Gee, he even insisted on renaming the Bulgarian section of the pipe "Balkan Stream," even though it is called TurkStream in all other countries.

There are, however, signs that the mood in the EU might be turning against Mr Borissov. A series of events in the past three months point in this direction. First came the international media response to the anti-governmental protests launched at the beginning of June. A series of headlines such as Politico's "How Bulgaria became the EU's mafia state" and Süddeutsche Zeitung's "Bulgaria: Together against the mafia" started shifting Europeans' attitude towards the stabilocracy established by Mr Borissov.

International attention, combined with cases of excessive police brutality against protesters and journalists during the regular marches, led to more strident language from various EU institutions. Council of Europe's Commissioner for Human Rights Dunja Mijatović criticised the attacks against journalists in September and on 1 October the Civil Liberties Committee of the European Parliament pledged "unequivocal support for the people of Bulgaria in their legitimate demands" in a draft resolution that was heatedly debated in the assembly later in October.

"The resolution we have to vote on will show that we are on the side of civil society in Bulgaria, that we support the calls for justice and democracy Let us not repeat the same mistakes that led to what we see happening in Hungary over the past ten years; don't let these mistakes happen in Bulgaria," German Social Democratic MEP Katarina Barley said during the 5 October debates. Yet, while the pressure from Green and Leftist MEPs is mounting, it seems that Mr Borissov's own European People's Party (EPP) is unwilling to denounce him just yet. "Bulgaria has to be proud of what it has achieved. Democracy functions Protests cannot bring a change of government. This can only happen through regular elections due to take place very soon, in March [of 2021]," the head of the EPP Manfred Weber said in defence of his close ally Mr Borissov.

Real proof that the tide had turned came with the release of the 2020 Rule of Law Report of the European Commission on 30 September. Fears that the report, which now covered rule of law issues in all 26 Member States, would be a toothless withdrawal from the CVM mechanism for Bulgaria, proved overblown. The report, albeit written in classic Brussels diplomatic language, highlighted a number of key problems that have remained unresolved by Sofia for years.

First, it reiterated the issue with the impunity of the Prosecutor General, underlining that instruments "concerning the effective accountability and criminal liability of the Prosecutor General" ought to be put in place. Secondly, the report highlighted the troubled media environment in the country: "Lack of transparency of media ownership is considered a source of concern.

The legal framework against political interference in the media does not explicitly forbid politicians from owning outlets, and links between political actors and some media outlets have been established." In the words of European Commission Vice President Vera Jourova before RFE/RL, the media situation in Bulgaria was "not rosy". Next came the assertion that the anti-corruption reforms remain mostly on paper, with "a solid track-record of final convictions in high-level corruption cases remaining to be established". Last, but not least, the report bashed the lack of transparency and predictability of the legislative process.

Pretend nothing is happening

Once again, Mr Borissov, government figureheads and GERB mouthpieces hurriedly buried their heads in the sand. "The report is objective," Mr Borissov said nonchalantly, while his newly appointed Justice Minister Dessislava Ahladova also focused on the praise in the document rather than on the unfinished tasks at hand. Nobody really commented on the criticisms of the media environment, the judiciary and the quality of the legislative process.

The big unknown is what comes next. Would Brussels and the key capitals of Europe - Paris and Berlin - remain halfheartedly engaged with the deepening political crisis in Bulgaria as they remain to focus on more pressing issues, including the post-COVID recovery and keeping the union together at an uncertain time? The rule of law report comes at a crucial - and delicate - moment when member states look for consensus on the next Multiannual Financial Framework.

A key question at hand is how the money would be spent over the next seven years, and even more importantly - what ought to be done if an EU country fails to live up to the rule of law standards of the Union. So far, there seems to be a deadlock between two contravening ideas of how to stop EU funding in cases of, say, corruption - through a qualified majority vote in the Council of Ministers or through full consensus between the heads of governments. Needless to say, the latter would render obsolete the principle of linking funds to comply with the rule of law.

In any case, the EU seems to have noted the problems in Bulgaria and, even if reluctantly, started acknowledging them openly. Commissioner Jourova made it clear that the CVM mechanism for Bulgaria would not be dismantled, saying that "we see that the Bulgarian people express significant interest in its continuation." Only time - and the relative balance of power within the European political families and in the core member states - will tell if this leads to a fundamental change of heart towards the convenient, albeit heavily compromised regime over which Mr Borissov has presided over the past decade. There is a risk, though - if Europe remains with eyes wide shut once again, it risks alienating the beating heart of one of the most pro-EU nations in the bloc, which would only lead to darker places.

It appears that Mr Borissov's EPP political family is reluctant to give up on him just yet, but it will only get harder for it to turn a blind eye to Bulgaria's problems