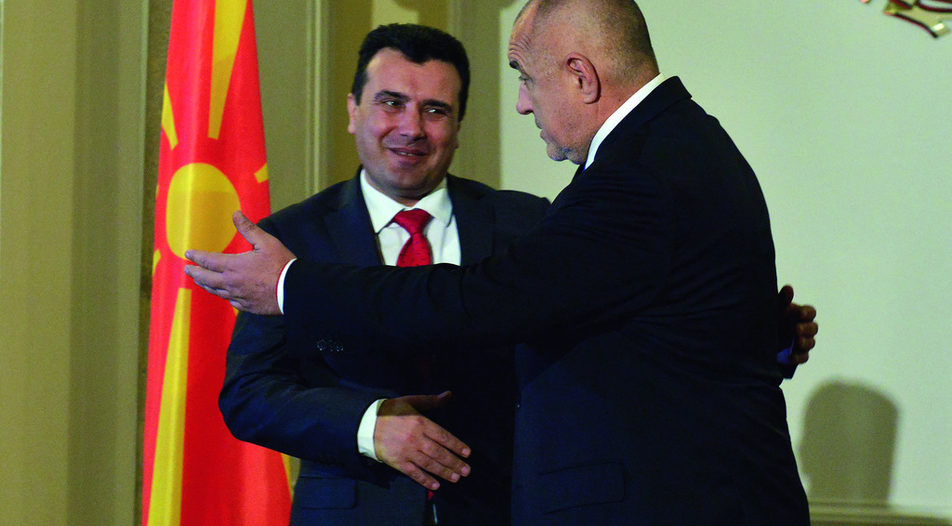 Following years of supposedly friendly bilateral relations, Bulgaria and N. Macedonia have regressed to a Cold War over identity topics

Following years of supposedly friendly bilateral relations, Bulgaria and N. Macedonia have regressed to a Cold War over identity topics

Imagine if, say, current good neighbourly relations between France and Germany were solely dependent on an agreement between the two countries on whether Charlemagne is French or German. Or if diplomacy between Austria and Germany hinged on when exactly the two linguistically similar nations parted ways, and who should take the credit for Mozart and who should take the blame for Hitler.

Ridiculous as it may sound, this is the recent state of affairs between Bulgaria and North Macedonia. Instead of opening up pathways to integration - infrastructural as well as cultural, economic and social - the 2017 Good Neighboring Agreement signed between Skopje and Sofia has become bogged down in history and identity disputes.

This may cause significant trouble to all sides involved - it may put yet another unneeded hurdle in the way of Skopje's already troubled path to EU accession, but it can also further isolate Sofia within the EU. If the government in Bulgaria chooses to act as a second Greece in the current environment, threatening to block Skopje's bid, it will only erode further its already troubled position in the EU.

What happened to the good neighbours?

The latest example of Bulgaria's change of tone vis-à-vis N. Macedonia was a secretively distributed memorandum bearing the long-winded name "Explanatory Memorandum on the relationship of the Republic of Bulgaria with the Republic of North Macedonia in the context of the EU enlargement and Association and Stabilization Process." Bulgarian diplomats sent copies of its six pages to all member states late in August, causing a stir in N. Macedonia because of the claims set out in the document - that "ethnic and linguistic engineering has taken place" in the country under Tito's Yugoslav regime and that Skopje needs to concede Bulgaria's historic claims. While most of the demands that Bulgaria has placed in the memorandum are not new (see the block), what is unique about it is that Sofia asks for formal European endorsement of a document that practically dismantles the very foundation of Macedonian ethno-linguistic identity claims.

The memorandum came just months after Bulgaria "welcomed" the EU's March decision to launch membership negotiations with N. Macedonia and Albania with a similarly worded ultimatum.

To add oil to the fire, Bulgarian Defense Minister and leader of the nationalist VMRO party Krassimir Karakachanov threatened that Bulgaria may declare that it is not the time to schedule the first intergovernmental conference between the EU members and Skopje. The conference, which ought to take place before the end of the year, would mark a threshold moment for N. Macedonia's EU bid.

"No one wants new criteria to be introduced for North Macedonia, but there is a very clear condition set by the EU that each candidate country must first clear up problems with its neighbours before starting negotiations," Mr Karakachanov said. He accused Skopje of purposefully dragging the work of the cross-border commission set up to clear up historic disputes between the two states. "This is the official position of the government. And this is made very clear to Skopje," he underlined.

The Bulgarian government's recent actions pose a number of questions about the way ahead for Bulgarian-N. Macedonian relations, and beyond. Most importantly, what foiled the mutually constructive attempts to bring about a thaw in relations over the past four years?

Of course, Mr Karakachanov's outburst can partly be explained by anti-government protests and VMRO's increasing marginalisation. Yet this is not the whole picture. An inherent deficiency in the agreement signed between Sofia and Skopje in 2017 was that very few concrete terms for the furthering of bilateral relations were set out from the start. Actually, one of the few concrete decisions taken was the establishment of a joint historic committee that ought to have clarified the divergence of historic discourses on either side of the border. This, by default, was a decision that placed bilateral relations hostage to history, which has long been a problem across the Balkans.

According to Bulgarian political scientist Ognyan Minchev. "By focusing solely on this topic, we create preconditions for alienation rather than for convergence." Deputy Prime Minister for European Affairs Nikola Dimitrov apparently agrees with this interpretation: on the day after Mr Karakachanov's latest statement, he underlined that the right of self-determination and self-expression of Macedonians could not be single-handedly denied by Bulgaria.

As well as Sofia and Skopje having little concrete in terms of cross-border projects to show for their recent appeasement, there is another reason for Bulgaria's toughening position. It is almost four years since the nationalists from VMRO joined a coalition with the nominally centre-right group of Prime Minister Boyko Borissov. Despite their relatively insignificant electoral share, they got overrepresented in key government and administrative positions, gaining primacy on certain niche topics for the Bulgarian public such as the Macedonian question. "We are just tooting our own horn, talking about Goce Delchev [a national hero whose allegiance is disputed by the two sides] and the past, and now we believe we can take this to the European level," Vessela Tcherneva, head of the Sofia bureau of the European Council of Foreign Relations told Capital weekly.

This policy of Sofia can go awry - in more ways than one. Bulgaria has recently fallen out of favour with Brussels - the incessant anti-government protests, accompanied by police brutality and allegations of high-level corruption have tarnished the image of Mr Borissov's government. A potential attempt to block N. Macedonia's bid may further sideline Sofia in Brussels - and even more importantly - in Berlin.

As Deutsche Welle recently wrote, while most EU nations remain silent about the Bulgarian memorandum-ultimatum, Germany, the current holder of the EU Council presidency and Bulgaria's main EU ally, seems unwilling to countenance it. German Ambassador to N. Macedonia Anke Holstein rejected Bulgaria's attempt to include the bilateral issues in the EU negotiations framework, saying that "bilateral problems should be solved bilaterally," to RFL/RL.

Mr Borissov would not want to clash with his most important ally, Chancellor Angela Merkel. Yet his domestic political survival depends on continued support from his VMRO allies, which puts him between a rock and a hard place. According to Dnevnik.bg, the government press service refused to respond to journalistic queries about exactly how official is the "official government position" outlined by Mr Karakachanov. Moreover, Mr Borissov congratulated N. Macedonia's reelected Prime Minister Zoran Zaev on his victory - albeit a few weeks late - stressing that Bulgaria's position in support of N. Macedonian accession remains unchanged. Yet, nothing is resolved until a date for the intergovernmental conference is set and Bulgaria has still not formally agreed to it.

So what did Sofia expect to achieve with its very problematic stance on N. Macedonia? The simple answer is that it is an attempt by Bulgaria's marginalised diplomacy and sidelined VMRO to gain relevancy and leverage at a crucial moment. Rather than have a clear objective, it is indicative of the impotency of the Bulgarian side to engage constructively with its neighbour and of the type of lobbies currently dominating the foreign policy establishment - one of unimaginative, reactionary conservatives. It is ironic that the two features that should be bringing Macedonians and Bulgarians together - their interlinked history and similar languages - have become the biggest bone of contention between the two sides.

- Refusal to officially use the term "Macedonian language" in documents except with a clear mention that the Bulgarian side does not recognise the "Macedonian language" as separate from Bulgarian;
- Adding a clause that ties progress with the bilateral agreement between Sofia and Skopje to the EU accession process;
- Skopje sending a verbal note to the UN members where it guarantees to waive any claims to the geographical region of Northern Macedonia, part of which is in Bulgaria;
- Complete renunciation of claims by N. Macedonia that there is a Macedonian national minority on Bulgarian territory;
- Rehabilitation of the victims of the Yugoslav regime so that they are imbued with Bulgarian self-consciousness;
- The historic commission achieving "concrete results" on the disputed topics of Goce Delchev, the original VMORO-VMRO revolutionary organisations and the Ilinden uprising.

Imagine if, say, current good neighbourly relations between France and Germany were solely dependent on an agreement between the two countries on whether Charlemagne is French or German. Or if diplomacy between Austria and Germany hinged on when exactly the two linguistically similar nations parted ways, and who should take the credit for Mozart and who should take the blame for Hitler.

Ridiculous as it may sound, this is the recent state of affairs between Bulgaria and North Macedonia. Instead of opening up pathways to integration - infrastructural as well as cultural, economic and social - the 2017 Good Neighboring Agreement signed between Skopje and Sofia has become bogged down in history and identity disputes.