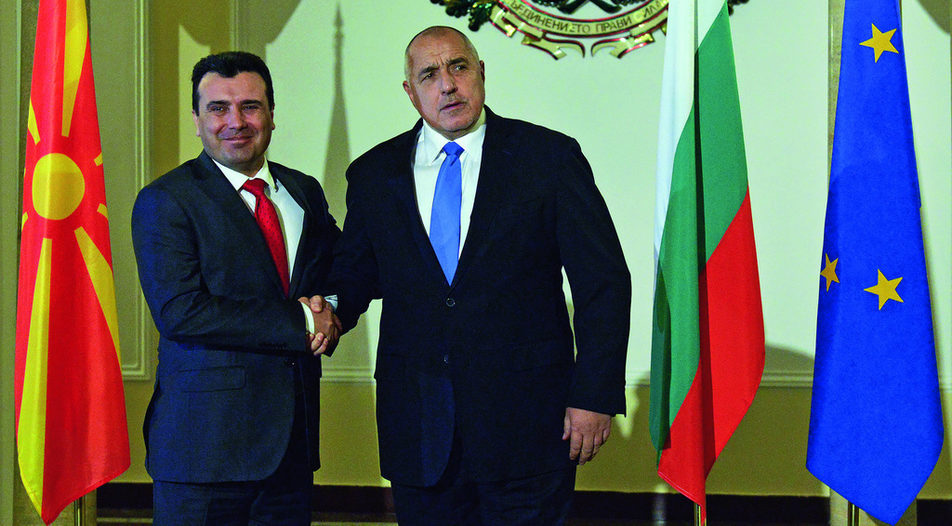 It is not easy being a Good Neighbor

It is not easy being a Good Neighbor

Sofia’s decision to re-ignite identity disputes with North Macedonia comes at a sensitive moment, putting more than its good relations with Skopje in jeopardy

Re-igniting language and history disputes just before the crucial elections in N. Macedonia will do Sofia a long-term disservice

A famous, albeit unattributed, quote states that the main export of the Balkans is history. It is only logical, then, that nations in the region attack each other's throats every time history gets in the way - one can look at it as a fight over market share. When it comes to the long and convoluted relations between North Macedonia and Bulgaria, history and language disputes always make things worse. Thus, setting them as the main topic for bilateral talks guarantees disaster.

For countries that have undeniably shared so much in the past, politicians and public figures on both sides seem to be solely focused on dividing it as if it is property belonging to divorcees and not shared heritage. The latest episodes of this drama came with the re-launch of high-level EU talks about Skopje's accession to the EU. Instead of boasting about its role in the process - in the end, it was the signing of the 2017 bilateral friendship treaty initiated by Sofia that paved the way for the unfreezing of N. Macedonia's relations with its neighbours and the EU - Bulgaria decided to provoke Skopje, and at a very bad moment.

A series of decisions from October 2019 until May 2020 displayed the lack of imagination of Bulgarian politicians and in practice dismantled the hard diplomatic work that had gone into establishing a détente with N. Macedonia in previous years. First came the October 2019 Framework Position adopted by the government in Sofia and backed by parliament, which approved the start of the accession negotiations between the EU on the one side and Albania and N. Macedonia on the other, while simultaneously listing 20 harsh demands that Skopje needed to fulfil within a set timetable.

"Bulgaria will not allow the EU integration of the Republic of North Macedonia to be accompanied by European legitimization of an anti-Bulgarian ideology," the document stated, adding that "rewriting of the history of parts of the Bulgarian people after 1944 is one of the pillars of the anti-Bulgarian ideological construction of Yugoslav totalitarianism."

Among the demands, the government sought from N. Macedonia was to give up its claims of a Macedonian minority in Bulgaria, to commit to progress on the work of the stalled bilateral committee on history, and ask the EU to refer to the "official language of Republic of North Macedonia" instead of the "Macedonian language." A counter-declaration signed by intellectuals on both sides saying "present-day Bulgaria and present-day Northern Macedonia are equal heirs to centuries-old culture and civilization", issued a few days later, drowned in the surrounding nationalist uproar.

In April of the next year, just as the EU General Affairs Council unanimously decided to start accession talks with North Macedonia, Bulgaria submitted a statement to the Council that practically reiterated its positions on the Macedonian minority and language question. In the meantime, the Bulgarian Academy of Sciences published a position - and later, a book, "On the Official Language of the Republic of North Macedonia," that re-stated the long-held position that spoken Macedonian is just a dialect of Bulgarian and that the written language is simply a "written-regional standard in Bulgarian."

The moves by Sofia could not have come at a worse time. Due to the earlier stalemate in EU accession negotiations, the reformist government of the Socialist SDSM party in Skopje, led by Prime Minister Zoran Zaev, called for an early election that is set for 15 July. Sofia's provocations practically served to both alienate Mr Zaev's party that is mostly friendly to Bulgaria, while simultaneously providing grist to the mill of the nationalist VMRO-DPMNE party of exiled ex-Prime Minister Nikola Gruevski, which often used ardent anti-Bulgarian rhetoric to justify its isolationism.

After the EU Council statement, the vice-president of VMRO-DPMNE Aleksandar Nikolovski, played the ball passed by the Bulgarian side and called for his country's political leaders to defend the national interest against Bulgarian demands by adopting a common declaration.

"This document directly undermines the foundations of Macedonian statehood - the Macedonian language, Macedonian history and the Macedonian nation," Nikolovski said, as quoted by BIRN. The SDSM-backed president of the country Stevo Pendarovski retaliated, saying in a N. Macedonian TV show that "if the price we have to pay is to say we are not Macedonians and that the language I speak is not Macedonian, then we don't need the EU."

Suddenly, Bulgaria became central to current N. Macedonian political discourse and was surprised it was not pretty. "There is currently an anti-Bulgarian campaign with many lies going on in North Macedonia," Bulgarian Foreign Minister Ekaterina Zaharieva said in May, adding that Sofia had never rejected Macedonian identity.

Focusing on skeletons in the closet

In a nutshell, after backing N. Macedonia on its Euro-Atlantic path for over two years, Bulgaria suddenly opted for reverse gear, focused on the unresolvable identity issues so beloved by nationalists on both sides, and got startled by the consequences. How shocking! The problems with this approach are at least twofold.

First, they come at the worst moment possible. Just as Mr Zaev, who has always maintained a positive attitude towards Sofia, was regaining popular support before the crucial elections on the basis of the renewed impetus of the EU to start negotiations with his country, Bulgaria warned its neighbor it could put a spanner in its EU application. By doing so, nationalists in Bulgaria gain marginal political traction, while jeopardizing longer term bilateral relations, and the future of N. Macedonian politics per se. While the reformed VMRO-DPMNE party without Mr Gruevski would likely not change the foreign policy direction of its country, the nationalist party in Skopje is definitely not going to be a better partner to Sofia if elected.

Second, by focusing on identity issues - which mostly happens because nothing else has happened in economic or infrastructural terms between the two countries since the détente in 2017 - the Bulgarian side is doing itself a disservice. "If someone in Sofia imagines that one day Skopje will accept the Bulgarian version of Macedonian history and language, they are in for a bad surprise," historian and Balkans specialist Dimitar Bechev from the Atlantic Council and the University of North Carolina in Chapel Hill wrote for Radio Free Europe's Bulgarian offshoot in May.

Bulgaria put many efforts into putting Western Balkans - and N. Macedonia per se - back on the EU agenda. It is, at best, unwise and counterproductive to unmake its own legacy because of temporary, limited political benefits. There are definitely more ways to build bridges between the two countries than repeat what divides them - the question is if Sofia has any of the political and diplomatic acumens to do so.

Re-igniting language and history disputes just before the crucial elections in N. Macedonia will do Sofia a long-term disservice

A famous, albeit unattributed, quote states that the main export of the Balkans is history. It is only logical, then, that nations in the region attack each other's throats every time history gets in the way - one can look at it as a fight over market share. When it comes to the long and convoluted relations between North Macedonia and Bulgaria, history and language disputes always make things worse. Thus, setting them as the main topic for bilateral talks guarantees disaster.