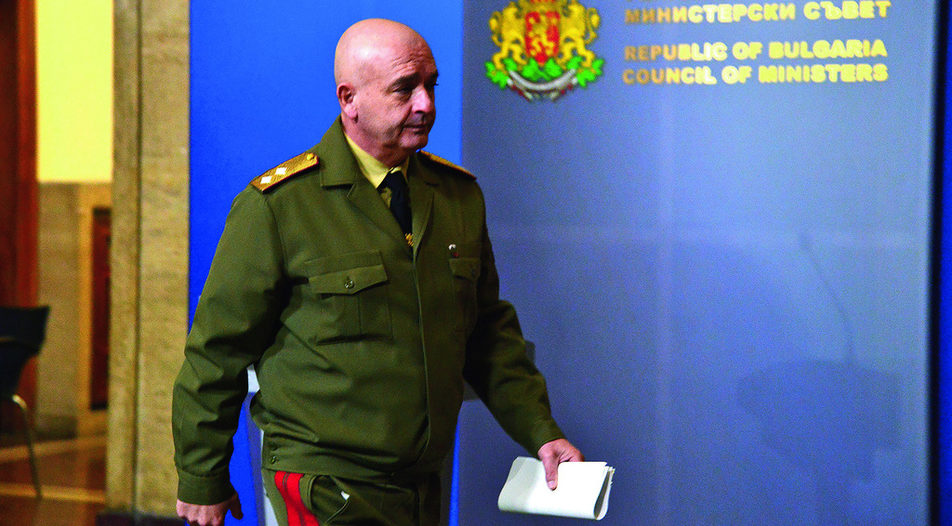 Major General Ventsislav Mutafchiyski — a man with a mission

The head of the anti COVID-19 fight, Ventsislav Mutafchiyski, quickly turned into a new fan-favorite during the first months of the pandemic, spurring speculation about a potential role in politics

Major General Ventsislav Mutafchiyski — a man with a mission

It was a warm Saturday evening in mid-March, a short (but important) period before all European countries went into full lockdown when a steely-eyed general in a drab uniform told Bulgarians in a sinister voice that "it is not time to party." "Today in central Sofia life went on as if everything is normal," Major General Ventsislav Mutafchiysky, M.D. warned on live TV, adding "it might be good that our nation has such courage, but we ought not to become facetious. An epidemic of unprecedented proportions in human history is coming our way. It will claim lives, the lives of our loved ones, of the mothers and fathers who took care of us, and of our beloved grandparents." Peering under his reading glasses with a combination of paternal concern and menace that only a military man could muster, he uttered: "And please do not ask me if hairdressers will remain open [because if you do], you do not comprehend the gravity of the situation." A serious man
Advertising
If one has to single out the moment when Bulgarians took the COVID-19 pandemic seriously, it must be this. A short, ten-minute briefing by the head of the anti-pandemic Operative Staff changed the public mood in a way that no world news about the advancing novel and deadly virus, or the political declaration of a state of emergency from only a day earlier, could. Many of those who mocked him for his likeness to a Bulgarian pop-folk musician Godzhi and called him "General Godzhi" in the days before the crisis suddenly started referring to him familiarly as simply "the General". And they listened to his pleas. For a few short months, people stayed home and most followed the anti-pandemic restrictions to limit non-essential travel and socializing. Newly diagnosed cases of COVID-19 were thin on the ground, there were few fatalities compared to countries with much better healthcare and the underfunded and understaffed Bulgarian medical system survived the initial blow. In hindsight - especially now that life is back to normal (maybe even too normal, bearing in mind the upsurge of diagnosed and hospitalized people) - it might seem like a token deed. But it can hardly be denied that the COVID-19 pandemic failed to hit Bulgaria as hard and as early as many other states at least partly due to the swift and decisive measures proposed by the body, headed by Mr Mutafchiysky. Starry background It is also not surprising that it took yet another general and one with the impressive CV of Mr Mutafchiysky to, at least partially, influence the behaviour of Bulgarians, who are notoriously skeptical of state authority. While by the letter of the law, the Operation Staff headed by him had a purely advisory role and it could only give recommendations to the government and the health authorities, it practically became the face of the anti-epidemic measures. It's also no coincidence that he went on live TV for his daily briefings in a uniform rather than in a suit or medical mantle. Or that he got referred to as general rather than as a professor or doctor - both titles that he has had for much longer. Speaking about titles, Mr Mutafchiysky has many, all of which - well deserved. Military Doctor, professor at, and President of, the Military Medical Academy (MMA), Major General from the Military Medical Service and practising surgeon since 1996; he has also toured Afghanistan and Iraq, treating Bulgarian and other NATO soldiers, as well as civilians with abdominal wounds. Mr Mutafchiysky famously volunteered in the Burgas hospital just hours after the 2012 bombing of the Sarafovo airport that targeted Israeli tourists, as he happened to be on a vacation in a nearby village resort. And it's not only shrapnel and gunshot wounds that the general had experience treating. In his two years as head of the MMA, Mr Mutafchiysky managed to clear over 14 million euro worth of debt that the hospital had incurred in the past, which highlights his significant managerial potential.

In a process that has turned into a pathology for Bulgarians, who seem to cling on to men in uniform at a time of crisis, the most natural question amidst the crisis was whether Mr Mutafchiysky would run for office and potentially become the next president. A position, ironically, currently occupied by another ex-general, the former chief of the air force Rumen Radev. "I am certain that he will receive an invitation to run for President, but whether he would take it is not yet known. He has not shown such ambitions so far, but I think it would be a logical move for GERB to invite him for the [presidential] race next autumn," Trend Agency sociologist Evelina Slavkova told Kanal 3 TV station in April. "The Bulgarian society likes generals; we've reached this conclusion long ago," she added.

View report ›
Advertising
Mr Mutafchiysky topped more than one express poll about the most trusted public figures, just as most Bulgarians supported the authorities' response. The popularity of the general reached such heights that Mr Borissov even betrayed a certain jealousy in public. "Professor, welcome Actually, stay at your place, don't sit at mine, because with this rating you are becoming a risk," the Prime Minister said semi-jocularly during one of his daily briefings. Not everybody is convinced that a bright political future awaits the medic general. Veslin Stoinev from the Economist magazine wrote that the high rating of Mr Mutafchiysky (as well as those of the Prime Minister and the other members of the ruling coalition) are a temporary fillip, stemming from their high visibility as the faces of the country's anti-pandemic response. "This form of trust depends entirely on whether the majority of the general public continues supporting the limitations or will grow weary of them because of the generally low number of deceased due to COVID-19, and decide the restrictions are excessive and unnecessary," wrote the journalist, foreshadowing the impending change of fortunes for the general. An MVP sent off to the bench "Carriers of bad news get killed, and we are about to get killed," said Mr Mutafchiysky himself at the end of April, amid lockdown fatigue and growing public impatience with the macabre tone of the Coronavirus Staff briefings. His prediction would turn out to be, at least partially, true - just a few days later Prime Minister Boyko Borissov suddenly ordered the briefings to stop, as an equally instantaneous dismantling of the anti-pandemic measures took place.
Advertising

Mr Mutafchiysky would retreat from the pressroom, but not from the public arena. In the following months, he appeared several times along Mr Borissov at military events - first at the Saint George's day military parade and then at anti-ship missile tests on the Black Sea Coast. Meanwhile, he stopped making dramatic statements about the enormous risks to public health and the healthcare system posed by COVID-19 just as the number of newly identified cases skyrocketed in June, reaching 170-180 per day, compared to 60-70 at the "height" of the epidemic in April.

This sort of behaviour only serves to fuel the rumours of a potential political career, but at the same time risks jeopardizing the very efforts of the Crisis Staff to contain the spread of the virus from the beginning of the pandemic. Actually, this risk existed from the very start of the anti-pandemic efforts. Allowing Mr Mutafchiyski to become the face and voice of the tough lockdown measures, while technically powerless to enforce them, was a smart strategic move on behalf of Mr Borissov. This left him with the opportunity to take the credit for the potential success of the lockdown and place the head of the Crisis Staff as a buffer to absorb public anger in case of a failure.

The sombre tone of Mr Mutafchiyski contrasted well with the paternalistic and caring image of Mr Borissov, who was the "good cop" allowing churches to remain open over Easter and Pasha, calling for anti-pandemic measures to be scaled down, but restrained by the "bad cop" general.

Whether they were the fruit of a genuine clash of ideas of how to respond to the pandemic or calculated piece of theatre, the decision of Mr Mutafchiysky to remain part of it, in practice amounted to a concession that the COVID-19 pandemic is now a political, not an epidemiological crisis. A dangerous notion that might harm much more than the popular general's reputation and image.

It was a warm Saturday evening in mid-March, a short (but important) period before all European countries went into full lockdown when a steely-eyed general in a drab uniform told Bulgarians in a sinister voice that "it is not time to party."