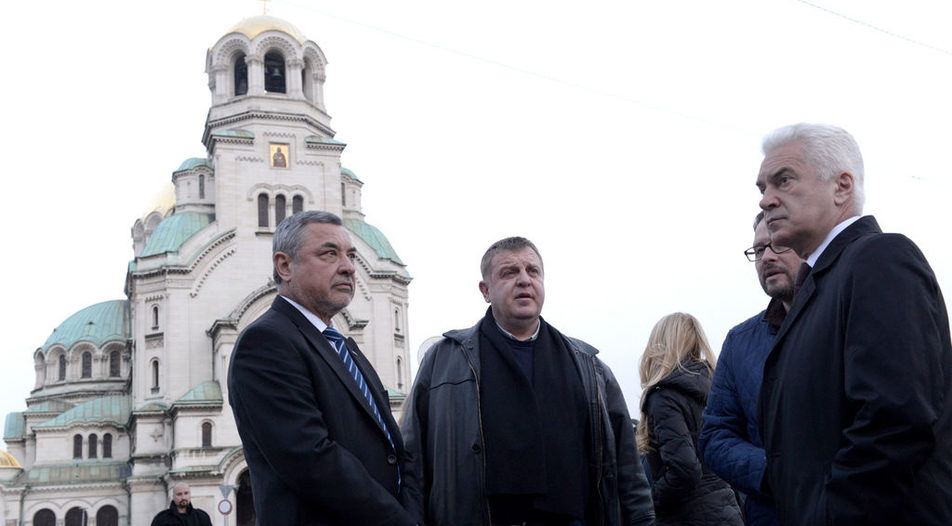 Valeri Simeonov, Krasimir Karakachanov and Volen Siderov, formed the United Patriots just before the 2016 presidential election to capitalize on the anti-immigrant attitudes of a large part of the Bulgarian population.

Valeri Simeonov, Krasimir Karakachanov and Volen Siderov, formed the United Patriots just before the 2016 presidential election to capitalize on the anti-immigrant attitudes of a large part of the Bulgarian population.

"A patriot be - for knowledge, freedom,

The soul's too small a price to pay! Mind you, not his soul, my brothers,
Advertising
The nation's soul he'll give away! And he's kind to everybody, But you see - for any pelf,

View report ›
Advertising
It's only human, he can't help it, He will sell his soul and self"

* A Patriot, by Hristo Botev

The famous poem "A Patriot" by the great Bulgarian poet and 19th century revolutionary Hristo Botev was written in the midst of the Bulgarian struggle for independence from the Ottoman Empire. It was a satire of the double-faced nature of self-proclaimed patriots who were doing little for the Bulgarian national liberation movement, yet loudly boasted their nationalism.

More than 140 years later, little has changed, particularly after United Patriots (UP) alliance of three nationalist parties became a junior partner in the third government led by Boyko Borissov. Famous for their audacious and strongly populist anti-Roma, anti-migrant rhetoric and calls for a stronger, more sovereign Bulgaria, they are not at all an anti-systemic group and have backed, at different times, both left-wing and right-wing governments. Considering their track record, it is safe to say that their rhetoric rarely matches the deeds.

Apart from getting into public scandals (several lower-key "patriots" were found to have taken their pictures doing Nazi salutes previously and got fired in the first days on their new jobs in the government) and occasionally supporting political deals that serve their leaders' personal interests, it is highly unlikely that their anti-EU, anti-NATO rhetoric would turn into meaningful attempts to distance the country from the Brussels' line. They will serve as a "safety fuse" to Mr. Borissov's cabinet that can easily get "screwed out" in case they cause too much trouble or need arises for defusing public tensions. Yet, as their nominees get into important government positions there is still enough potential for damage they can wreak.

Who are the "Patriots"?

The United Patriots are a ragtag group of political parties with very different backgrounds and vested interests that came together just before the 2016 presidential election to capitalize on the anti-immigrant attitudes of a large part of the Bulgarian population. Despite the fact that two of the parties - the National Front for Salvation of Bulgaria (NFSB) and VMRO (a reference to the organization that fought a guerrilla warfare to liberate Bulgarian-populated territories in present day Macedonia from Ottoman rule in the early 20th century) were supporting the second Borissov government (2009-2013, and Ataka ("attack") party backed the short-lived Oresharski government of 2013-2014, they still managed to present themselves as an anti-status-quo player in last year's presidential elelctions, with their candidate and VMRO leader Krasimir Karakachanov winning 573 000 votes, or 15% of the popular vote.

The good result made them stick together and they gathered 320 000 votes in the snap parliamentary elections that followed in the spring of 2017. The drop in support reflected the vanishing fear of refugees, as the numbers of migrants in Bulgarian camps plunged due to the strengthening of controls at the border with Turkey by the European Border Agency. Also, a disastrous public stunt by NFSB leader Valeri Simeonov, who pushed to the ground an elderly ethnic Turk Bulgarian lady who had come from Turkey to vote, showed the upper limit of tolerance to extremism that even voters identifying themselves as nationalists have. As sociologist Tsvetozar Tomov told Capital at the time: "These elections showed that ultranationalism can go that far in Bulgaria. It is actually much lower than in many European countries - they got the same amount of votes that Ataka won in 2005".

United Patriots won 27 of the 240 seats in parliament and, after some tense negotiations, joined the executive branch of power for the first time. Previously, the nationalist parties had only backed the governing party or coalition in parliament but had never taken positions in government. This time Mr. Karakachanov became Minister of Defence and Emil Karanikolov, a nomination of Ataka who has barely anything to do with the party, became Minister of Economy. Valeri Simeonov, for his part, became a vice-PM for demographic issues, which is a nominal position.

What can go wrong?

Several things can go awry. First of all, the United Patriots' main election promise to increase the minimum state pension to 200 levs (100 euro) by the end of the four-year mandate and hike the minimum salary to 650 levs (325 euro) will turn into a strain for the state budget as those increases can amount to 1.8 billion levs per year, according to estimates of Peter Ganev from the Sofia-based Institute for Market Economics.

Secondly, Mr. Karakachanov's grip of the Defence Ministry may cause problems for the state rearmament project, as his vision and the prime minister's vision about the future of the military diverge. Moreover, Mr. Karakachanov, an ex-agent of the Communist-era State Security service (DS), may not be well received in NATO's headquarters.

Finally, when it comes to the energy sector, the UP's grip of the sector is expanding and given the fact that their main energy expert is the infamous Stefan Gamizov (a murky energy middleman), this will certainly lead to scandals.

Last but not least, the relations between the UP's constituting parties could always go out of control. Although Valeri Simeonov and Ataka leader Volen Siderov are close family friends (and Mr. Simeonov bankrolled the rise of Ataka) they have a history of vicious scandals.

Although they might not turn to be the bane of the Borissov-3 government, the United Patriots are still a problematic coalition partner. The European People's Party (EPP), GERB's European sister faction has already bashed Mr. Borissov for his decision to govern with the nationalists. Also, many Western embassies in Sofia maintain a policy of non-communication with UP, which makes relationship with the government a hard one. For GERB, it would be a bumpy ride with the nationalists.

"A patriot be - for knowledge, freedom,

The soul's too small a price to pay!