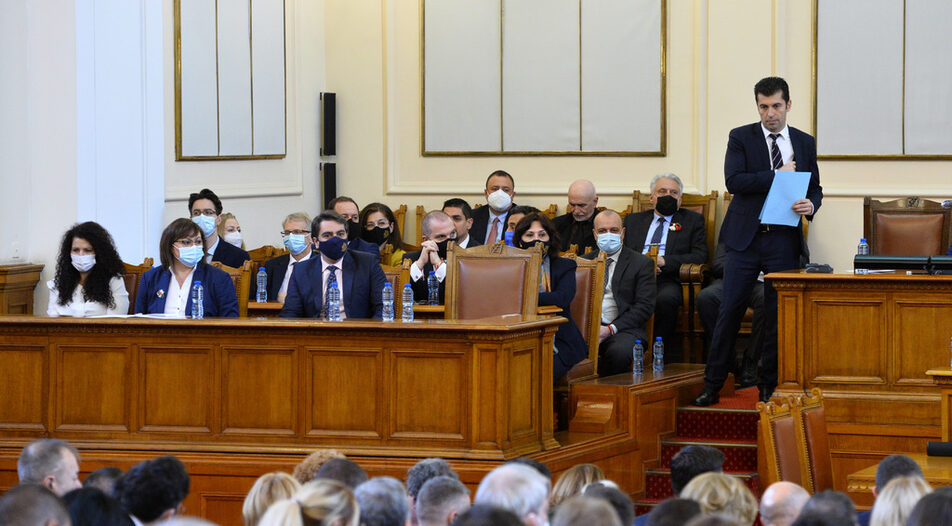 100 Days in Power: Where is the coalition heading to?

The cabinet is extremely divided since its creation, but the gaps have only been growing since then

100 Days in Power: Where is the coalition heading to?

Three months into its mandate, the ruling coalition is splintered and facing a myriad of crises and inter-institutional wars

The cabinet is extremely divided since its creation, but the gaps have only been growing since then

This week marked one hundred days since Prime Minister Kiril Petkov entered office, heading a four-party coalition. When he and his WCC party became the pinnacle of a wide and ideologically diverse group of political factions just over three months ago, they promised swift reforms of key sectors, expertise-driven decisionmaking and zero tolerance towards corruption.

Their biggest hurdles seemed to be the antagonistic institutions in dire need of reform. These included the Prosecution, as well as the parties of the former status quo, MRF and GERB, who had loyalists embedded in key institutions and were far more proficient at political intrigue and procedural games in Parliament.

One hundred days later, the situation could not be more different. A major war is raging on Bulgaria's doorstep, inflationary pressure and skyrocketing energy prices create social tensions, the unreformed institutions continue resisting change and, on top of that, the ruling coalition appears to have no internal cohesion on key topics. The main objective of getting rid of GERB and the oligarchic networks it created, which kept the ragtag group of parties together, seems secondary. So what comes next?

A hundred days and a whole world apart

When Prime Minister Petkov entered office on 14 December last year, he said that his cabinet would be granted no "honeymoon" period. He could hardly have anticipated how prophetic his words were. At the time, the situation seemed fraught - a day after his election, Mr Petkov had to urgently tackle floods across southern Bulgaria and the energy regulator's announced plan to sharply raise electricity prices. A hundred days later, these problems seem a walk in the park against the backdrop of the war in Ukraine and the tens of thousands of refugees arriving in Bulgaria, the deepening price crisis, the fifth wave of Covid-19, the torturous attempts to reform the judiciary, the head-on clashes with the prosecution on all fronts, and the elephant traps set by the vastly more experienced opposition in parliament.

On Wednesday, when Mr Petkov published a video summarizing his team's accomplishments over the past hundred days, he admitted that change was not coming fast enough. Bearing in mind the perfect storm the cabinet has faced, it is hard to tell how much of this lagging speed is due to its (in)actions. The fact is, however, that reforms are already behind the ambitious deadlines, most personnel decisions are at a dead end, and initial high public support is starting to wane. So far, the fragile, four-member ruling coalition of WCC, BSP, TISP and Democratic Bulgaria has somehow managed to hold, despite significant schisms developing between them. However, the coming months could prove even more challenging, especially if the current crises deepen and solutions are not urgently found and implemented.

Since December 13, when the Petkov cabinet was sworn in, the Council of Ministers and the parties of the ruling coalition have submitted a total of 29 bills for discussion, but only seven of them have been formally adopted.
Advertising

Of the envisaged structural reforms, the only one that has been finalized is the creation of a Ministry of e-Governance. However, the promised urgent reform of the Forestry Agency, which was supposed to be transferred to the Council of Ministers but is still under the Ministry of Agriculture, has stalled because of clashes within the coalition (WCC MP Alexander Dounchev, who opposes BSP's political appointments in the forestry sector); the issue has even been put on the back burner indefinitely.

In terms of Covid-19, the cabinet's only "success" so far is that it abandoned the unpopular Green Certificates, despite uncertainty about the direction of the pandemic and potential new deadly waves. The campaign to pay pensioners 75 BGN to get vaccinated failed to win over enough converts, and the long-promised media campaign on the benefits of vaccines only kick-started on 21 March and has not yet really gathered momentum.

In terms of anti-corruption efforts, the loudly proclaimed "zero tolerance" to graft and last week's detention of former Prime Minister Boyko Borissov and some of his GERB acolytes were initially welcomed by the public. Enthusiasm quickly waned, however, after it turned out the executive had not built a sufficient case to keep Mr Borissov in custody.

The approval by the European Commission of the Recovery and Development Plan has been postponed yet again. On the other hand, as the Ukraine war made the country's gas dependence on Russia an ever more pressing problem (another contract with Gazprom is in question), the cabinet has prioritized the construction of the gas link between Bulgaria and Greece and announced that it will be ready in September.

Where is the much heralded judicial reform?

Although Prime Minister Petkov has repeatedly stated that the issue of judicial reform is key (and this was noted with a deadline "immediately" in the coalition agreement), progress has been negligible. Only a week ago the parliamentary committee on legal affairs considered and adopted at first reading the closure of the specialized court and prosecutor's office, which was finally passed on Wednesday.

The reform of the anti-corruption commission, set as a priority, has also not started: no concrete draft law has been submitted to Parliament, although the deadline in the coalition agreement was set as "no later than 3 months from the start of the work of the National Assembly". According to Dnevnik.bg, the head of the office of the Prime Minister Lena Borislavova is in charge of drafting the bill and coordinating it with the coalition partners.

The debate on amendments to the Constitution, which are supposed to limit the powers of the prosecutor general, also stopped before it started because the opposition blocked the work of the temporary parliamentary committee where the amendments were to be discussed.

After a hiatus around the start of the war in Ukraine, the arrest of former Prime Minister Borissov last week put the issue of replacing Prosecutor General Ivan Geshev back on the agenda. "Once again we are witnessing sabotage by the prosecutor's office," Mr Petkov said, concluding that there is no independent prosecutor's office in Bulgaria.

Is there a pilot in the airplane?

Despite promises of greater transparency in decision making, the first hundred days of the new government have not provided a clear answer to how decisions are made. The coalition agreement stipulates that expert councils meet on legislative initiatives - 18 in total. On paper, each of them should meet at least once a month, but media reports claim most of the groups have not met at all, and what is considered expert discussions is, in fact, one-to-one exchanges in the corridors of parliament or phone calls between MPs.

Russia's invasion of Ukraine, and the attitude towards it, not only led to the first change in the Petkov cabinet, but also regularly highlighted the opposing views among the coalition's members. The cabinet's initial pro-European and pro-NATO stance on the war was sabotaged by BSP's refusal to permit sending any military assistance to Kyiv. BSP also created discord vis-a-vis sanctions against Moscow, refusing to support this text of the parliament's declaration. The Socialists also prevented pro-NATO defense specialist Todor Tagarev succeeding ousted Defense Minister Stefan Yanev. Attitudes towards the war will remain one of the critical points for the coalition in the coming weeks.

Lastly, as we wrote in our last newsletter, the clash between the coalition partners is only beginning - now two of the ruling parties have their own nominees for the position of governor of the National Bank. TISP backs its own MP and former banker Lyubomir Karimanski, while WCC made a last-minute decision to back the head of its parliamentary group, financier Andrei Gryurov. The problem is that Mr Karimanski appears to have already gathered support for his election from the opposition parties, GERB, MRF and Vazrazhdane. If he gets elected with their votes, this will surely damage the coalition - unless it simply kills it.

This week marked one hundred days since Prime Minister Kiril Petkov entered office, heading a four-party coalition. When he and his WCC party became the pinnacle of a wide and ideologically diverse group of political factions just over three months ago, they promised swift reforms of key sectors, expertise-driven decisionmaking and zero tolerance towards corruption.

Their biggest hurdles seemed to be the antagonistic institutions in dire need of reform. These included the Prosecution, as well as the parties of the former status quo, MRF and GERB, who had loyalists embedded in key institutions and were far more proficient at political intrigue and procedural games in Parliament.