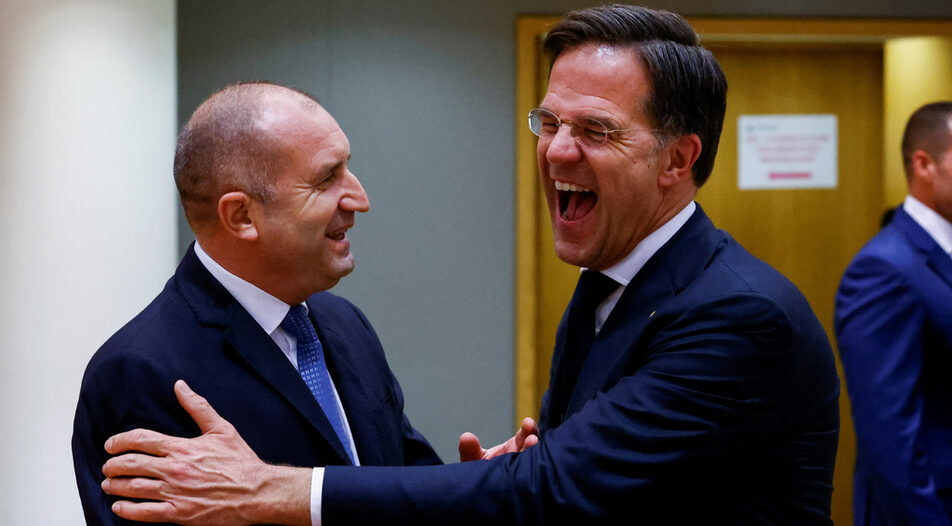 The week: Catching-up with the neighbors and looking for a lost highway

The week: Catching-up with the neighbors and looking for a lost highway

The decisive month for Bulgaria, how we lost tens of millions on a highway, and whom did Stoichkov meet?

To be honest, we're not Croatia. No, I'm not talking about geography: islands and seaside, or proximity to Western Europe. What I'm referring to is more on the political side. It's the important gauge of any state's effectiveness, big or small: the capacity to actually get things done.

You might illustrate this with a bridge. Or with the fact that a state which had a war and entered the European Union a full 7 years after Bulgaria now has more than 1300 kilometers of highways, to Bulgaria's 800 (some of which are crumbling).

But the best way to illustrate it would be Schengen. The Croats are firmly on track to enter the border-free area by December this year. This would mark their full integration into the EU core, having been admitted to the eurozone some time prior. Despite acceding to the Union a lot earlier, Sofia is still not a member of either.

Bulgaria still maintains it's going to enter the euro by 2024 which is highly doubtful. Yet Schengen is another matter.

We still have a shot at entering together with Croatia and Romania. The vote will be in Brussels on 8 December.

What makes it difficult is the opposition of the Dutch. While we are in no way helping our case with problems like the one on the Turkish border, it has to be said that the European institutions are sympathetic to Sofia. The technical check of Schengen readiness has just finished and "there are no newfound problems that require a further delay", said the European Commission.

Diplomats note that the Dutch position is a lot more nuanced and milder than previous years. So what we are up against basically is a bilateral issue that requires some soft skills and bargaining. The diplomats and the people running the caretaker government have a month to clear this hurdle.

This is where the quality I mentioned at the beginning matters. Entering Schengen is good news for business, for transportation companies, for border cities and for Bulgarians themselves. It is also an image booster for a country that really needs it. It is possible, feasible and worth the effort. Let's see if we manage to keep up with the Croats this time.

This newsletter is, as usual, helped by

After three days of disputes and accusations of mid-night manipulations, the MPs managed to form part of their standing committees to start their actual work. However, the committees on agriculture, sports and religion were left without chairs, while two others were not formed at all, after GERB and MRF opposed the candidacies of Radostin Vassilev and Ivan Hristanov from WCC.

The chairs of the committees were distributed proportionally according to the size of the parliamentary groups. Thus, GERB headed seven committees, WCC - five, MRF - four, Vazrazhdane - three, BSP - three, Democratic Bulgaria - two, and Bulgarian Rise - one.

In any case, the distribution of chairmanships of the committees might be symbolic, as it seems unlikely that a coalition is possible. With this in mind (and in order to give MPs some time to pass crucial laws), President Rumen Radev said he would not expedite consultations to form a cabinet.

Some appointments are quite interesting - two of the most important committees - the Budget and Finance and the Internal affairs committees, were handed to the Turkish MRF party.

This week, the Venice Commission (Commission for Democracy through Law) of the Council of Europe responded to ex-Justice Minister Nadezhda Yordanova's questions regarding the mechanism for oversight of the Prosecutor General, proposed by the last government.

While expressing its general approval of the measures proposed by the previous justice authorities, European magistrates say they believe the goal of improving the accountability of the Prosecutor General cannot be achieved by "changing the rules on criminal investigations only." Instead, wider reform is needed.

BNB Governor: Next window of opportunity to join the euro might be a decade away

The possibility of Bulgaria joining the eurozone in 2024 was considered quite realistic, but the steps to do so in 2021 are delayed, Bulgarian National Bank (BNB) Governor Dimitar Radev told MPs during a Thursday debate about progress towards adopting the common European currency.

He recalled that even before joining the EU, Bulgaria had a plan to enter the euro area as soon as possible and had indicated an indicative date for this in 2009. "This shows that this door is opened periodically, not staying open all the time. The previous cycle we missed was 10 years ago; now, with diminishing chances of success, we have an opportunity to continue the accession process. The risk is that this process is terminated," Mr Radev warned.

Where do the parties stand?

The three biggest parties are "Pro": GERB proposed a plan for hasty consultations with all relevant EU institutions that ought to lead to the planned adoption of the euro at the beginning of 2024. WCC's official position is that they support entry, yet nothing too detailed has been said. MRF are strongly in favor.

BSP joined the choir of anti-EU Vazrazhdane in demanding a slower pace for Bulgaria's euro adoption, fearing that prices and inflation may subsequently skyrocket.

Without a stable government, however, do not expect any moves in that direction.

The Finance Ministry canceled the auction for 200 million bonds maturing in July 2026 after placing 200 million from the same issue just two weeks ago. The reason for the failure now is the sharp rise in the yield to 5.8%. In the previous auction, the 3.5-year bond yield was below the 4.5% weighted average yield, and in mid-September, the level was 3%.

is the annual credit growth rate as of September, according to data from the Bulgarian National Bank. This means a slight slowdown in company loans and keeping the same pace in mortgages.

is the projected rise in employees' salaries in Bulgaria next year, the annual Total Remuneration Mercer survey shows. It was conducted among 461 companies in the country in May 2022.

Company attracted 24 million in investment and opened an office next to the Institute for Computer Science, Artificial Intelligence and Technology (INSAIT). The founders of the company are Bulgarian scientists Martin Vechev and Dr. Petar Tsankov, Prof. Andreas Krause, and Dr. Pavol Bielik. They are developing the first platform for a new generation of artificial intelligence.

NEXT-DC The Bulgarian advertising agency works already on Twitter's communication projects for the EMEA markets (Europe, the Middle East, Africa), Israel, and Germany from the summer of 2022.4. Energy: Electricity and gas prices go down

The TTF gas benchmark continued to dwindle this week and reached one of its lowest points in the last 1.5 years. The index closed on 24-27 October below 40 euros per mWh which is 7-10 times the price just a few weeks back. The drop means that the Bulgarian Energy Regulator will likely set a price below 200 lv per mgWh for November.

In the meantime, electricity prices have also gone down and they are around 180 euros per mwh. They will likely go up once the weather cools down which is expected to happen in mid-November.

According to caretaker Energy Minister Rossen Hristov at least two companies will take part in the nuclear fuel tender which is set to happen soon. The Kozloduy NPP normally buys Russian fuel, but due to sanctions the Bulgarian government is trying to diversify and attract Western companies.

Person: Georgi Cholakov The Chairman of the Supreme Administrative Court (SAC) has acquired a guest house with a swimming pool with warm mineral water in the village of Pchelin (near Kostenets) for the modest sum of 10,000 leva, the investigative website Bird.bg reported this week. "It was a good offer," Mr Cholakov was quoted as saying. He denies (a) that he used mineral water and (b) that it was a simulated transaction in which the declared price was much lower than the price actually paid.
Location: "Hemus"

Eight new people have been charged with money-laundering regarding the construction of the highway which became known as "bags with money". The previous government claimed millions of euros had been handed to shell companies, through which they disappeared. A football referee from Southwestern Bulgaria is the main suspect, yet to be honest - does someone really believe tens of millions of state money were handed to a construction company, then to shell companies and have been funelled off and there wasn't a single politician involved?

Picture of the week:

Our stories from this week, if you missed them:

A decisive month for Sofia's application to join Schengen

Monbat and the future of batteries

To be honest, we're not Croatia. No, I'm not talking about geography: islands and seaside, or proximity to Western Europe. What I'm referring to is more on the political side. It's the important gauge of any state's effectiveness, big or small: the capacity to actually get things done.

You might illustrate this with a bridge. Or with the fact that a state which had a war and entered the European Union a full 7 years after Bulgaria now has more than 1300 kilometers of highways, to Bulgaria's 800 (some of which are crumbling).