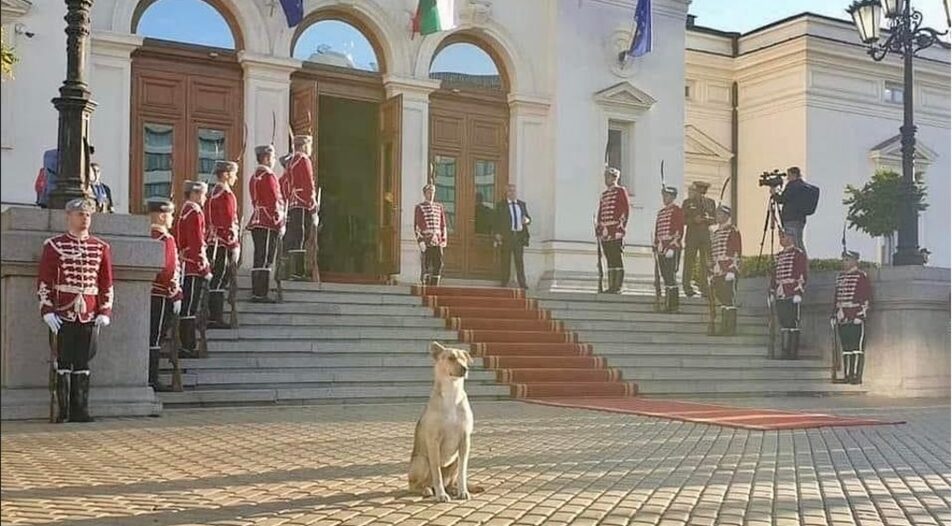 The week: Fear not the political feuds, even when they tell you to on the TV

Picture of the week: The unlikely canine star of the Parliament opening

The week: Fear not the political feuds, even when they tell you to on the TV

The optimist theory for the economy, Parliament is stuck, President is happy, and the Dutch don’t like us

Picture of the week: The unlikely canine star of the Parliament opening

It's a rare thing to accuse a journalist of being over-optimistic these days. After all, it should all be doom and gloom, right? That's what politicians and countless talking heads have been force feeding us for some time now.

Yet here I am, standing proudly by my words from several weeks ago, that the Bulgarian economy is doing great (for now) and the main thing it suffers from, is political meddling. Moreover, I claim again that not having a regular government is far from a disaster.

And now I have the proof.

Turns out, the National Statistics was wrong on the GDP last year. Very wrong. From the data published on October 19 by the Statistical Institute it transpires that previously published data in March about economic growth in 2021 was incorrect - it grew not by 4.2%, but by as much as 7.6%.

That's a huge difference. It's actually so big it raises questions about the quality of government data and the way it works. But let's leave those for another day. The important point is, that in a tumultuous year, in which we had 4 different governments - 2 caretaker ones and 2 regular ones - the economy grew at a record pace and volume. The last time we had such growth was back in the 1990s when we were exiting a hyperinflation period, and from a very low base.

The record growth now puts us in the upper bracket of the EU last year and also lowers the deficit from 4.1% to 3.9%.

Advertising
It was a wonderful year for many reasons, of course - the EU economy was reviving, post-Covid exports were up by a record pace, people spent a lot more - yet my point is, that none of this was hindered by the engulfing political chaos.

I would argue that the only important political event was the loosening of GERB's complete control over the economy. After that "stability" faded, it seems the economy kept on humming rather well - even with almost zero EU funds and no political presents for various municipalities.

So don't take my word for it - the data proves it. Once you remove the political lid from the business field, it boils fast. We don't need a "stable, regular" government. We need someone to keep the books, keep the racketeering capabilities of the state in check and pay salaries to administrative staff.

And we need someone to make and amend laws. Which brings us to the current political stalemate (as you will see below). It's, of course, essential to have a working parliament from time to time. But having political parties perpetually feuding there is by no means the tragedy we've been led to believe. I have a hunch the data might prove that also, in the near future.

This newsletter is, as usual, helped by Martin Dimitrov and Evgeni Ahmadzai

All the signs were there, but nobody expected the 48th National Assembly to malfunction on its first day of office. In effect, as you read this, the Parliament would have (most likely) not yet have chosen its Speaker, three days into its constitution on Wednesday. It's not even properly constituted yet - it can't formally close the first session until a Speaker is elected.

Basically, the reason for the deadlock is that none of the seven parties can convince 121 MPs to back their nominee - GERB's Rossen Zhelyazkov could only muster 103 votes (from his own party and MRF), WCC's Nikola Minchev got 98. Both were withdrawn later on and MRF's late entrant, Yordan Tsonev, never managed to lift off. One idea of Democratic Bulgaria was for a rotating presidency. It also got nowhere. So unless someone starts talking to someone else and there is a breakthrough, this Parliament is probably not gonna even start.

Just imagine what it will be like for this bunch of deputies to pass a budget together (which needs to happen soon). It is unclear how the parties would find a way out of the mess they created. But the damage has certainly been done. The toxic atmosphere will only exacerbate the rising mistrust in the current Bulgarian constitutional order.

He continues imposing his own agenda, people and policies completely unrestrained. In his opening statement in Parliament, he warned that Bulgarians will not forgive "those who push the country towards the fire of war," i.e. Democratic Bulgaria, which still pleads for weapon support for Ukraine. Then he went to Brussels to represent Sofia on the European Council, saying that "people around here are getting used to seeing the President (instead of the PM), and that's not a good thing". Is it not, though, if you are the President?

He obviously plans to stay for a while

In the meantime, Radev's cabinet continued taking consequential decisions - it urgently launched competitions for the boards of directors of 20 state-owned firms, restarted the bid for new armored vehicles for the army and approved a proposal for the purchase of the second batch of 8 combat aircraft for the air force

Talking about planes, Bulgaria will receive much-needed air support from one of its NATO allies - 8 Spanish Eurofighter Typhoons will patrol the skies above the country from 1 November until 23 December alongside the Bulgarian Air Force.

Spain is not the only NATO ally arriving in support of Bulgaria this month. On Monday the Italian army officially took over the command of the multinational NATO force in Bulgaria that reinforces the country's defense. The formation, whose core will be nearly 800 Italian soldiers and officers, should reach full operational capability by the end of the year and be ready to carry out combat missions together with troops from Bulgaria, Albania, the United States and possibly several other NATO member states.

While the Netherlands still thinks Bulgaria isn't a suitable friend

A day after the European Parliament voted a resolution with overwhelming support in favor of accepting Romania and Bulgaria into Schengen from next year, the Dutch parliament voted a resolution, requesting its government to veto that. The Dutch have been stopping us for over a decade now and seem unmoved by the latest technical check that proved everything is fine. Tough crowd for President Radev, indeed.

Our stories from this week, if you missed them:

2. Economy: The markets are not especially fond of us, neither

Bulgaria has not been giving the best signals, it turns out, to the markets, since the latest 5-year bond placement reached a 5.65% yield, which is 1.5 percentage points higher than a month ago. This is the highest level Sofia has paid since 2009.

Is the forecast for next year of The Ministry of Finance. Unemployment is expected to be 4.6 percent, and inflation - 6.4%

Billion levs, or 6.6% will be the deficit next year, according to the same ministry.

The Devnya giant invests between 150-200 million euros in an alternative fuels installation. This will prove successful for a company which wants to stay competitive in a market where many producers don't pay for emission quotas.

The company is investing over 23 million levs in a new can-producing factory in Blagoevgrad. This will allow for more locally produced beer cans, which are currently imported.

The VC fund is announcing the new Eleven Alpha program. Participating startups are going to receive up to 300 thousand euros in exchange for a 10% stake in the company. Eleven call it "a Unicorn deal" as it imitates the model of their investment in Payhawk - their first company with a valuation over 1 billion dollars.

4. Energy: We filled up the gas reserve!

This week Bulgaria's gas storage in Chiren reached unprecedented levels of 84%. It is quite frankly surprising considering that gas supplies were cut by Russia and the caretaker cabinet did not find a long term LNG deal. Chiren now has almost 500 mill cubic meters of gas which could be used in the span of three months. In the meantime, gas prices have fallen throughout Europe and the regulator will most likely reduce the price for the regulated market by 20% in November.

The long-serving Dutch PM will have to decide next month whether to support Bulgaria's entry into Schengen. Rumor has it that ex-PM Kiril Petkov had negotiated with Rutte and Emmanuel Macron for Sofia's entry into the border-free zone, in exchange for our support for North Macedonia. Even if such a deal did exist, it seems long dead now. Yet it still will fall on Rutte to say "yes or no" to our application and earn the gratitude or scorn of lots of people here.

KillNet - over last weekend, the Russian hacktivist group temporarily restricted access to several Bulgarian institutional websites by conducting a DDoS attack, including those of the Presidency and the Defense Ministry. Read the whole story - and why it matters - here.

The borders - more and more illegally crossing people have been caught by the state authorities in recent months, the Interior ministry reported. A total of 2,822 third-country nationals were detained in September, 23.3% more than in the previous month. In the first 9 months of 2022, a total of 12,740 migrants have been detained, a 2.6-fold increase compared to the total number of detainees in the same period of 2021 - 6,560.

Words of the week: Пикаенето и ерекцията не се изпускат (Peeing and erection ought passed over)

Former PM and GERB leader Boyko Borissov loves his layman's metaphors, which continue to amaze and offend people, and strike a blow against all good taste and refined sensibilities. This week's quote came after GERB member and former finance minister Kiril Ananiev dared to say that the party might back a We Continue the Change government.

For this, he got utterly and absolutely needlessly humiliated by his party boss, who said that "After a certain age, one ought not to pass over an erection or a chance to pee". The ageist offense practically meant: don't listen to the old guy (Mr Ananiev, an otherwise respected financier, is 67 - only 4 years older than Mr Borissov himself), he doesn't know when to talk and when not to. If we were to be blunt, from a certain point onwards, Mr. Borissov ought not to miss a chance to shut up, if he wants to get any partners.

It's a rare thing to accuse a journalist of being over-optimistic these days. After all, it should all be doom and gloom, right? That's what politicians and countless talking heads have been force feeding us for some time now.

Yet here I am, standing proudly by my words from several weeks ago, that the Bulgarian economy is doing great (for now) and the main thing it suffers from, is political meddling. Moreover, I claim again that not having a regular government is far from a disaster.