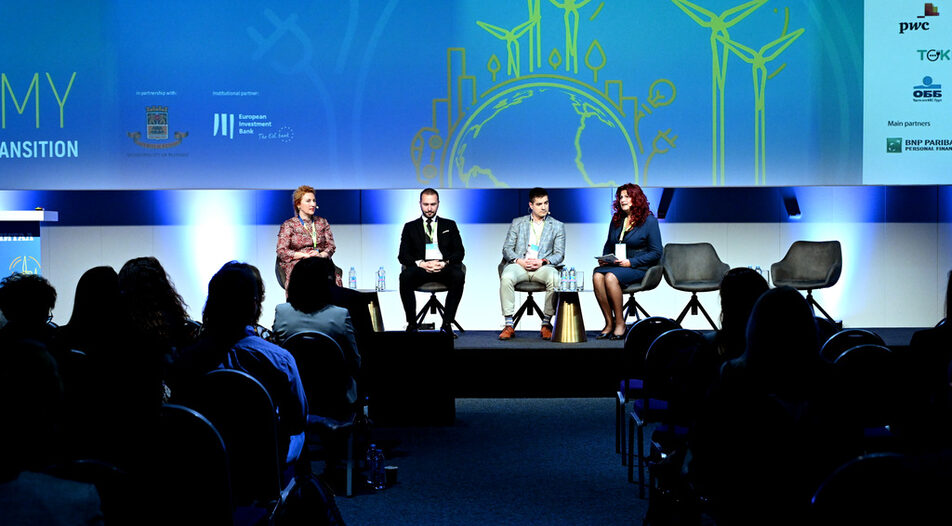 For a second year in a row, the Capital Weekly has organized the Net Zero Economy forum in Sofia. The conference gathered energy experts, green business entrepreneurs, ESG advocates and financiers. It gave a true idea where Bulgaria is on its route to net zero emissions. And it also paved the way for future business ideas that can be set up to help the green transition.

The expression "green premium" was coined years ago to mark the difference in price between a conventionally produced product and another that involves no greenhouse gas (GHG) emissions. An example of green premium is the preferential price for electricity produced from renewable sources, introduced in Bulgaria about a decade ago. Back in the days, renewables needed huge capital investments and therefore the state compensated them by buying their electricity at a higher price from 2012 onwards.

As technology improves, the need to pay extra for the decarbonization of the economy has gradually decreased. Billionaire Bill Gates has predicted that the green premium can only be reduced when there is a greater supply of green technologies. Thus, the green industrial production can only then become competitive to the conventional one.

But in the last year the situation has radically changed - the prices of gas, oil and electricity have jumped to record levels and the green premium has become completely redundant. After the major Covid lockdowns and the start of the war in Ukraine, the fossil fuels and already established supply chains have become more expensive than green technologies, making renewables more economically viable.

"What we tried in the last decades to achieve with political measures and through carbon emissions trading, the market managed to impose in the entire geopolitical situation," European Parliament member Radan Kanev during his speech at the conference.

The new reality also provides new prerequisites for a change in the economy to achieve Europe's carbon-neutral goals by 2050. The focus during the conference was on the innovations that occur as a result of the energy crisis, record-high inflation and the war in Ukraine.

This year, the decarbonisation of businesses and the European economy has turned from a plan for the future to a way of survival. Energy efficiency-boosting measures save huge costs for companies, investments in solar systems for own needs or geothermal installations give independence from volatile prices of electricity on energy exchanges, and electric cars are cheaper than their counterparts running on methane, diesel or gasoline. On a larger scale, new renewable energy plants can provide low-cost energy nationally and regionally without the need for imports of natural gas or nuclear fuel.

For all this to happen, however, both large capital investments and administrative relief are needed.

"From the point of view of access to fresh funds, we are facing difficult times. This is one of the big challenges that I see in financing new green projects. A year ago the war seemed just like a bluff, but now it is real. In terms of the energy transition, the volatility of prices is misleading. Investments have become more expensive and more difficult," the publisher of Capital Weekly, Ivo Prokopiev, commented at the opening of the conference.

"There will be additional financial resources directed to sectors such as green hydrogen and to those that do not yet have a clear climate orientation - such as the heavy industry. As a financial institution that has climate goals, we are ready to support new markets with new financial instruments," said Liliana Pavlova , Vice President of the European Investment Bank.

Green innovations in the construction industry were also a topic of concern during the conference. Buildings account for about 40% of the planet's carbon emissions, and nearly a third of them come from materials used in construction. That is why new solutions in the sector are important. For example, the use of alternative construction materials such as iron silicate, which copper smelter Aurubis Bulgaria turns out as a by-product, can ensure a truly circular economy.

In the production of cement, efforts are aimed at reducing the use of fossil fuels in favour of alternative ones, as well as replacing cement clinker with other products. The company Holcim Bulgaria already operates 85% on alternative fuel, and its composite cement brands include mineral ingredients such as ash from coal-fired power plants. Construction companies such as Glavbolgarstroy, on the other hand, focus their efforts on purchasing regional raw materials, in which the projects are also located, thus reducing unnecessary emissions. The company also uses photovoltaic installations on its sites and predicts increasing use of hybrid-powered excavators and machines.

"The drive towards carbon neutrality is really noticeable in large companies. We see it here in companies like Tetrapak and Schneider Electric, which effectively manage and measure their scope 1 and 2 emissions (direct emissions from the company's activities and indirect from electricity used) and identify priority areas to reduce them. They have taken a full value chain approach, making really deep emissions cuts," says Maxfield Weiss, CEO of CDP Europe.

Several companies as well as platforms Hydrogen Catapult, Global Hydrogen Stakeholder Platform and CWP Global participated in the discussion about green hydrogen during the event. Until recently, almost everyone was skeptical about the possibility of green hydrogen to replace traditional fuels. However, things have changed now that natural gas costs 200-300 euro per MWh in the EU indexes.

Experts are still debating whether to invest in electrolysers to produce green hydrogen or to build renewables first. In any case, without this new abstract technology the decarbonisation of a number of sectors in industry and transport simply cannot happen.

For a second year in a row, the Capital Weekly has organized the Net Zero Economy forum in Sofia. The conference gathered energy experts, green business entrepreneurs, ESG advocates and financiers. It gave a true idea where Bulgaria is on its route to net zero emissions. And it also paved the way for future business ideas that can be set up to help the green transition.