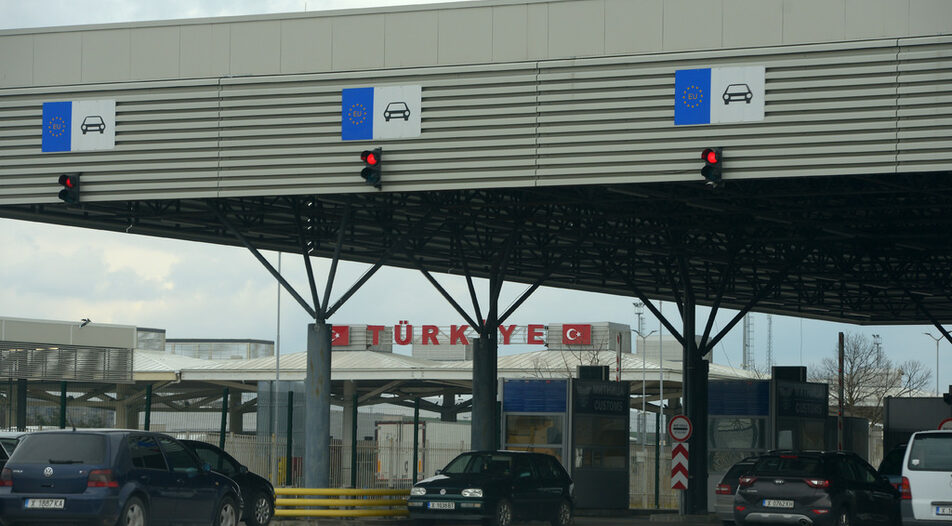 The private border of Bulgaria and the EU

Kapitan Andreevo is the busiest border crossing on the only EU land border with Asia Minor, where, on a normal day, more than 2500 trucks pass through the border between Bulgaria and Turkey

The private border of Bulgaria and the EU

Kiril Petkov’s government suddenly collapses when it delves into the issue of a shady business operating on the border with Turkey for over a decade.

Kapitan Andreevo is the busiest border crossing on the only EU land border with Asia Minor, where, on a normal day, more than 2500 trucks pass through the border between Bulgaria and Turkey

This article has been prepared in the framework of a cooperation program between major press titles in Central Europe led by Visegrad Insight at the Res Publica Foundation. The original publication can be found on Visegrad Insight.

'This government did not fall in parliament. It fell on the Kapitan Andreevo border crossing.' Those were the words of the leader of the largest parliamentary group in the Bulgarian parliament, after the no-confidence vote, which brought down the cabinet of Kiril Petkov.

Mr Andrey Gurov was right on point. The political troubles of Petkov's cabinet erupted suddenly out of the blue. Yet they coincided very strangely with the largest anti-corruption battle for the return of statehood this government managed to start - taking back control of the Turkish border. For the better part of the last decade a nexus between shady private interests and corrupt state officials have created a 'don't ask, don't tell' zone, through which each year passes millions of euros and a multitude of goods.

Kapitan Andreevo is the busiest border crossing on the only EU land border with Asia Minor. On a normal day, more than 2500 trucks pass through the border between Bulgaria and Turkey, en route to the biggest and wealthiest consumer market in the world. This year, with the naval blockade of the Black sea, those numbers are constantly going up. For the first six months of 2022, there has been a 17 per cent growth in the number of trucks.

As the first point of entry into the Union, this is the place where they are checked, vetted, and deemed safe. More than 20 per cent of them are carrying foods, animals and live cultures - their sanitary documentation is checked here before it reaches shopping aisles in France, Netherlands and Denmark etc.

It should all be performed by the Bulgarian food safety agency and controlled by the Customs agency.

Yet as it turned out, it is not exactly so.

'Those Are Very Dangerous People'

It all started in May 2022, when the deputy minister of agriculture Ivan Hristanov announced the end of a small contract. A private company has been tasked with checking the cargo, testing it and presenting the results to Bulgaria's authorities - who have been accepting them mostly at face value. Eurolab 2011 and its predecessor have collected tax on laboratory checks on the border for more than a decade.

It has been doing so based on a simple rent contract - Eurolab has rented out all of the available space in the border hub, where the checks are made, and in that way allowed for no other company to operate there - either as a private partner of the National Food Agency or as a customs cargo representative. There was literally no space for competition.

It soon transpired that this has not happened by accident. The Deputy Minister of Agriculture, Ivan Hristanov, claimed there were phone threats against him and an effort to bribe him, as well as the head of the Food Agency, which is supposed to supervise the border checks. The amount mentioned (caught on a recording) was 3 million euros per year.

When the government moved ahead with installing Food Agency controllers on the spot and cutting the company short, things got even uglier. One deputy from the nearby region of Burgas, who is part of the ruling majority and is also the head of the anti-corruption committee in the Parliament described a phone call he got, after digging in to the matter and spreading the word on various TV stations. 'Those are very dangerous people you're messing with,' said the caller. 'They control everything from the city of Haskovo to the border - police, customs officers, food inspectors. They have killed over 160 people and 20 have disappeared. No one ever proved anything.'

Another deputy from the same party, who has worked on the issue, described in detail how things were controlled. All of the trucks carrying food or sanitary cargo, had to pass an inspection. The inspection was done in the closed space of the private company, with no oversight from customs officers. There was not a single videotape over the years to verify any check - the cables from the video recorders have been cut.

After the trucks have received their documents, they passed the customs point without further checks and entered the EU.

There are two evident problems with these revelations. First, it is simply unfathomable that such a scheme even existed. Imagine the US outsourcing its power to vet the entering cargo trucks from Mexico to a private company with little previous history. What makes it even more troublesome is that the company in question 'inherited' the contract and the workers from another company, which also had connections to shady figures from the past.

If anyone had this level of control, they would have been able to operate an 'official' racketeering operation where the importers pay for faster checks or no checks at all. And those who do not pay, end up at the end of the line which for food and other fast-selling goods, means commercial ruin.

Also, the private company is able to cause mayhem on demand - for example, right after the government decided to cut the contract short, lines of trucks started appearing. It was all due to delayed documentation, unregulated use of parking space etc. The Turkish side claimed the wait reached six days in some extreme cases.

But there is another, even more, troubling assumption - this being a land border between the Middle East and the EU, a lot of the illicit trade between the two is probably using it. Anyone with the power to open and close containers is in a position to help or hinder this traffic.

It has been estimated to be somewhere between one to one and a half billion levs (500-700 million euros) per year were made through illicit dealings on the border. That is a considerable sum and stopping it would aggravate many beneficiaries of the scheme.

This leads to the second point. Since such an operation required high-level protection, it is hard to dismantle it overnight. For example, The Food Agency had to hire many more employees, as the current ones there are on sick leave indefinitely.

Two sources confirmed these new inspectors are receiving threats on a daily basis. There is no information on whether the customs or the border police have changed any of their agents there, even though it is impossible to believe that such a scheme went on without the knowledge of higher-level officials in the ministries.

It is even harder to do anything when you are not in control anymore. Incidentally or not, the government of Kiril Petkov crumbled and fell soon after it touched the border issue. All of the opposition parties and one of the coalition partners in the government cried 'foul' and chastised the government for acting on this. And a court in Sofia has decided just this week that taking the company out of the border offices was illegal, which means they are now free to return.

A positive development though is that the government managed to bring in an EU mission to audit the border. Will that be enough, remains to be seen.

'In Mexico, law enforcement is an entrepreneurial activity,' says one of the heroes in the US-Mexican drug drama 'Traffic.' This was true for Bulgaria for the better part of the past two decades.

As one of the people involved in the whole uncovering of the story told me: 'if the media stops reporting on this, and the government stops doing anything, we [the whistleblowers] are as good as dead.'

This article has been prepared in the framework of a cooperation program between major press titles in Central Europe led by Visegrad Insight at the Res Publica Foundation. The original publication can be found on Visegrad Insight.

'This government did not fall in parliament. It fell on the Kapitan Andreevo border crossing.' Those were the words of the leader of the largest parliamentary group in the Bulgarian parliament, after the no-confidence vote, which brought down the cabinet of Kiril Petkov.