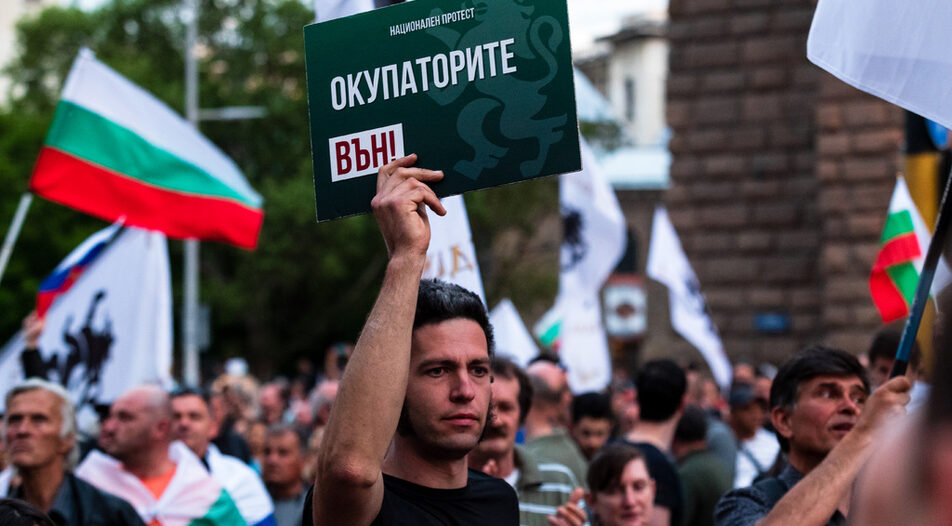 Is Bulgaria the weak link in Europe’s fight against Russian disinformation?

Is Bulgaria the weak link in Europe’s fight against Russian disinformation?

Pro-Kremlin propaganda has been flooding the country for years, fracturing the social fabric and offering a fruitful environment for the spread of disinformation

If the media is considered a weapon during wartime, Bulgaria is likely to shoot itself in the foot. Western nations mustered an unprecedented unified response to Russia's invasion of Ukraine. At the same time, the moral judgment on even the most blatant atrocities is a cause for division among Bulgarians. This is the logical consequence of strategic pro-Kremlin propaganda, which has been flooding the country for years. It has fractured the social fabric, thus rendering Bulgaria a weak link in the EU and NATO's defense lines.

The main channels through which propaganda flows are local media outlets and digital platforms such as Facebook. Bulgaria offers a particularly fruitful environment for the spread of pro-Russian disinformation. Levels of media literacy are low while the country's communist past has ingrained pro-Russian attitudes into the cultural mainstream. High levels of corruption in politics that have given oligarchs the power to stifle freedom of expression have also exacted their toll.

"The political parties that governed Bulgaria in the last 30 years have created a web of subservient media outlets. Those outlets in turn have distorted people's views on what's objective," says Hristo Milchev, founder of the Citizens Platform for Opposition to Discrimination.

The "web" Milchev refers to is the brainchild of oligarchs who have bought out media outlets and statesmen alike, thereby securing both public and governmental support for policies and legislation in service of their own economic interests.

A report on attitudes towards Vladimir Putin in Bulgarian society, issued by the polling agency Alpha Research in April, illustrates the strength of local pro-Russian sentiments. The report shows that the Russian president's approval ratings dropped significantly in the first month of the war. Nevertheless, a striking 25% of the population still expressed support for him.

Propaganda streams - through fringe and mainstream

A sizable number of fringe websites and blogs reprint disinformation from Russian sources and amplify pro-Kremlin opinions voiced on social media. The fact that this information is published through a media outlet lends it a sense of credibility that trolls later exploit in reposting the content on Facebook. This is a well-established propaganda mechanism which has been used to promote pro-Kremlin sentiments since at least the annexation of Crimea in 2014.

Tabloids linked with oligarchs such as Delyan Peevski, who last year was sanctioned under the global Magnitsky act, also produce their fair share of pro-Russian propaganda.

This is not coincidental. Goran Georgiev, a political analyst with the Sofia-based Center for the Study of Democracy (CSD), argues that certain media outlets are owned by businessmen with lucrative economic ties to Russia. "Those businessmen share an interest in maintaining a positive perception of Russian-funded projects in Bulgaria," Georgiev adds.

Those economic interests also find an expression through political parties. The Bulgarian Socialist Party's own TV channel, for example, regularly provides a stage for pro-Russian commentators, including some who come from far-right circles. The Movement for Rights and Freedoms, which is tied to Peevsky, exercises its influence through more insidious means. The party played an important role in the election of the Bulgarian National Television's current director. Since the start of the war the outlet has released a stream of pro-Kremlin propaganda in the guise of presenting a plurality of viewpoints.

Behind a curtain of pluralism

Public media outlets have provided an overall objective coverage of the war. However, propaganda finds its way through what, at the very least, appears to be poor judgment on the part of newscasters and producers. As an example of this, one national TV channel broadcasted war-themed commentary by a Bulgarian man who is currently under investigation for Russian espionage.

Most outlets also aired a speech by the Russian ambassador to Sofia in which she compared Bulgaria to Donbass and urged viewers to consider the Ukraine conflict as equivalent to the Russo-Turkish war for Bulgarian independence in the late 1800's.

There also are prime-time shows which regularly air pro-Kremlin propaganda. This usually happens during what are purported to be debates between pro-Russian and pro-Western commentators. However, this is only a false pretense for the spread of disinformation. "There is enough information that Ukraine hosts biological laboratories and nuclear weapon sites," said one such commentator during a TV appearance in March.

One of the most prominent proponents of Russia in Bulgarian media is Petar Volgin, a broadcaster on national radio. Volgin markets himself as offering an alternative to the "dominant pro-Western narrative". He uses only Moscow-sanctioned language, referring to the war as a "special operation" and gives voice to commentators who argue for the illegitimacy of the Ukrainian authorities.

All loud on the social media front

Nikola Tulechki, cofounder of the non-profit Data for Good and part of a team running a Bulgarian fact-checking platform, has created a social media aggregator monitoring pro-Kremlin Facebook pages. In a 7-day period the aggregator recorded 1 million interactions that include comments, likes and shares generated by the followers of any given page. Some of the most active groups reach between 200 and 300 thousand interactions based on 200 or so posts a week.

A deeper dive into two such pages with a combined following of 170 thousand people reveals the outlines of a network for the spread of disinformation. Each page has 6 anonymous administrators, which makes it impossible to check whether they overlap. However, both of them share information from a single blog at a similar frequency. The blog owner himself operates a number of websites that generate pro-Kremlin propaganda. While none of them claim to be official news sources, they draw their credibility from quoting western publications such as the Associated Press and The Guardian, mostly out of context.

"The end goal is to reach as many people as possible. To get there, however, propagandists start off with more gullible users who are likely to 'bite the bait' on misinformation," says Tulechki.

Pages that spread conspiracy theories, for example about aliens, attract just the right kind of person. Once the page aggregates enough followers, the administrators transition into publishing pro-Russian content. This approach was tried and tested during the Covid pandemic when similar - or in some cases the same - pages sowed division on the basis of false information about vaccines.

Tulechki has observed that social media websites are very convenient for the proliferation of misinformation. He says that platforms such as Facebook allow propagandists to fine-tune their messaging.

"All it takes is to make several posts and wait for a couple of days to see which of them generate the most interactions. You take the most popular ones and repeat the process again and again until you optimize the content's reach," Tulechki says.

Hristo Milchev administers a Facebook page dedicated to debunking propagandist content. Throughout the years Milchev and his team have "experimented" with different approaches to combating propaganda. One of the main conclusions they have reached is that people are most likely to change their mind only if those doing the debunking are close to them.

"We created a Facebook profile exuding pro-Russian sentiments and used it to question actual Russophiles on their attitudes towards Putin and his actions. This led to a situation where the Russophiles started questioning their own assumptions," Milchev says. He attributes the shift to the fact that people are more likely to trust the arguments of someone who is "on their team".

Conventional media outlets are subjected to a greater number of regulations. There, more so than on social media, the opposition to disinformation is framed by dialogue on freedom of expression.

As a legal expert on the right to free expression, lawyer and freedom of access to information advocate Aleksandar Kashymov argues that maintaining a plurality of standpoints in the public sphere is crucial for democracy and should be protected. "It has to be clear, however, that extraordinary circumstances such as those created by war, allow for limiting freedom of speech, especially in the case of hate speech," he says.

According to Kashymov, both Bulgarian and international law put statements which deny or belittle crimes against peace and humanity under close scrutiny. In the current situation, hate speech directed towards Ukraine is particularly problematic in Bulgaria given the fact that the country has received thousands of Ukrainian refugees who could feel threatened by such statements.

However, Kashymov himself admits that applying legal principles which limit the right to free speech in any way could set a harmful precedent which could be exploited by more authoritarian leaders in the future.

Rather than relying on state intervention, media outlets could combat disinformation themselves. They do so through fact checking services. France Press and the Association of European journalists in Bulgaria both run websites dedicated to debunking false news. Last year, the Bulgarian national radio launched its own fact-checking initiative in response to the fraud media landscape surrounding the Covid-19 pandemic.

The digital Revival of the far-right

The topic of propaganda regularly emerges in discussions about the rise of far-right movements. Vazrazhdane (which means Revival in Bulgarian) is the latest party of such inclinations to rise on the Bulgarian political stage. During the latest round of parliamentary elections it became the only nationalist formation to secure seats in parliament.

Vazrazhdane's success can be traced to a campaign orchestrated mainly over social media that focused on opposition to anti-Covid measures such as vaccinations and mask mandates. Tulechki's data shows that Vazrazhdane is now using the same channels to propagate pro-Russian propaganda.

The party is arguably the most active political group on the internet in Bulgaria right now. It uses Facebook, Youtube and TikTok to disseminate propaganda to its growing group of supporters.

"We monitor the pages, set up by their regional branches and the profiles of their leaders. The number of people who engage with their content is astounding. They hold close to 60% of the online engagement with content from political figures online," Tulechki says.

If the media is considered a weapon during wartime, Bulgaria is likely to shoot itself in the foot. Western nations mustered an unprecedented unified response to Russia's invasion of Ukraine. At the same time, the moral judgment on even the most blatant atrocities is a cause for division among Bulgarians. This is the logical consequence of strategic pro-Kremlin propaganda, which has been flooding the country for years. It has fractured the social fabric, thus rendering Bulgaria a weak link in the EU and NATO's defense lines.

The main channels through which propaganda flows are local media outlets and digital platforms such as Facebook. Bulgaria offers a particularly fruitful environment for the spread of pro-Russian disinformation. Levels of media literacy are low while the country's communist past has ingrained pro-Russian attitudes into the cultural mainstream. High levels of corruption in politics that have given oligarchs the power to stifle freedom of expression have also exacted their toll.