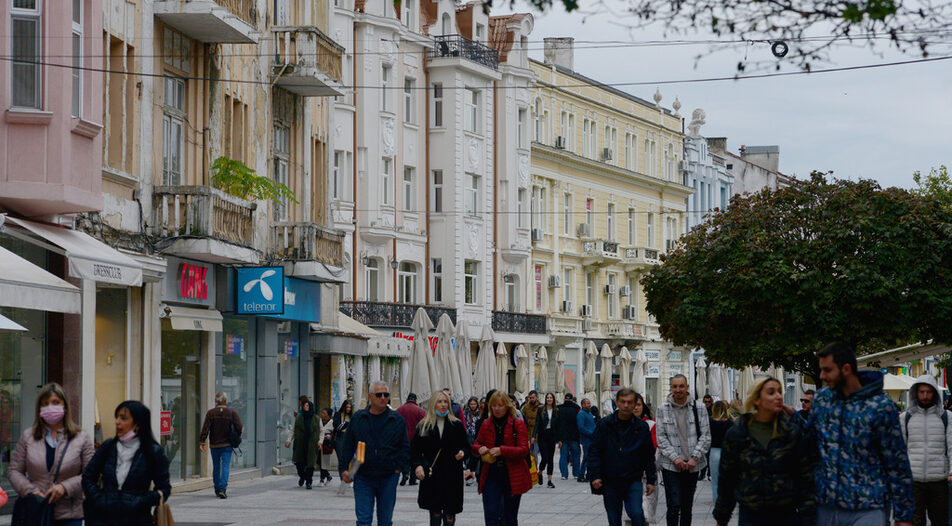 2360 years after Phillip of Macedon named it after him, 136 years after it joined new Bulgaria, and 10 years after its new economic ascent began, Plovdiv greets a new arrival: the office of Capital.

It's always a thrill to discover new cities. They are full of adventures, new contacts, new places, new viewpoints, new fears and, of course, new passions.

The reason we're opening an office there is simple: Plovdiv is a thriving hub. Not just in terms of urban development, new real estate or its culinary and cultural scene - though this surely aids our decision (I can certainly claim that Bulgaria's second city is its culinary heart).

Yet what's more important for Capital and its readers - a distinguished group to which I'm sure you feel some sort of belonging - is that Plovdiv and its nearby regions are bursting with business.

More than 170 plants in terms of manufacturing, more than 70 thousand people working in them, 600 thousand living within 30 minutes from Plovdiv, lots of IT companies moving there. There are more and more of those statistics. To put it simply: Plovdiv is growing.

It sounds simple, yet it is a miracle.

For the past 3 decades, no Bulgarian city outside of Sofia has experienced such growth. The demography has been changing for the worse, devastated by depopulation and brain drain. It's all been painted in such doom-laden colors in the media, that people actually started believing that no other city would ever thrive again.

So say it loud, and say it proud: the media has been wrong. Demography is not destiny.

Bulgarian cities have a future and for at least some of them, it is rather bright. Plovdiv is the flagbearer of this new wave, but others might follow suit. And we will be there to track & record.

P.S: If you have a business or urban development story for us in Plovdiv, do let us know.

Cabinet talks: this time behind the curtain

After five days and almost 90 hours of public talks streamed online, the four parties that are supposed to form a coalition cabinet - We Continue the Change (WCC), TISP, BSP and Democratic Bulgaria (DemBG) seem to have had enough of transparency.

Cabinet discussions regarding political appointees considering names were moved to their traditional place - behind closed doors.

While the official talks outlined some shared policy goals of the future coalition (and some points of contention - read all about them in this week's outline by Kapital Insights), the main goal of the negotiations - which party controls how many ministries, and who will be put in charge there - remained information privy only to the party leaders.

Yet despite this secrecy, a leaked mail to the leadership of one of the parties - DSB, part of DB - revealed the supposed scheme of the new government (seriously, who mails those things to large mail groups?).

No, this is not some twisted football formation, it is the rumored potential distribution of ministerial seats between the four parties we know so far. Here are the highlights (with the caveat that everything will be finalized at the last minute and, until then, is practically undecided):

There are many other unknowns, including the leadership of the likely Ministry of e-governance and the always problematic Agricultural Ministry, but we will have to wait and see.

Earlier today the new 240 MPs took their oaths in the 47th National Assembly. Hopefully it will survive longer than the previous two!

Who wants the chair?

One big unknown is what happens to the position of Parliament Chairperson - there are rumors that the four parties are thinking of rotating the position each year, with BSP leader Kornelia Ninova taking the first round. She denied this.

They are in opposition now, but that doesn't mean they don't have weapons. As we wrote a few weeks ago, the next government might stumble upon many "mines" left by GERB and MRF's appointees in key places of power that are supposed to be reformed. One such occasion transpired this week with the announced disposal of the brand new director of the State Consolidation Company that manages most of the big state-owned assets, including military factories and research institutions, Vanya Karaganeva. She was one of the last appointees of Mr Petkov in his capacity as a caretaker Economy Minister.

The story in a nutshell: three directors of the state-owned mega-holding, appointed in the final days of the GERB government, accused Ms Karaganeva of a number of abuses and tried to oust her. She rejected their allegations and challenged the board's decision to remove her from office as having been taken in violation of the company's charter and bylaws.

Current caretaker minister, Daniela Vezieva, backed her and called the action a "well-prepared kompromat". We will see how the saga will unfold, but even the anti-corruption institution got involved already.

And speaking of the anti-corruption commission:

It's kinda active these days. After entering Varna and Stara zagora municipalities, it has announced that the procurement of e-buses was irregular. Since those are both GERB municipalities, and the commission is close to the ex-ruling party, it is a curious turn of events. Let's see...

The big question: who makes the budget

The finance ministry, obviously. Yet, who gets to control it - whether it's the caretaker government, or the supposedly new one, is still not clear. The current finance minister started preparing the budget for next year, announcing things like 10-12 billion levs of debt ceiling (more than twice the current cap), pension bonuses, etc.

Also: who gets to spend?

The state's budget is expected to be in surplus of 570 million levs (290 million euro) at the end of November, according to the Finance Ministry's preliminary data and estimates. This means the next government will get to spend 8 billion levs in the final month of the year. Which government this turns out to be is becoming quite important, after all.

The international rating agency S&P Global Ratings confirmed the long-term and short-term credit rating of Bulgaria in foreign and local currency BBB/A-2. It remains BBB/A-2 with a stable perspective. The agency believes pandemic fallout is manageable and that growth perspectives are promising because of strong consumption and the pending EU funding. S&P predicts that Bulgaria will get up to 30 billion euros over the next decade, which is the best possible scenario for EU funding, given its present delay. The rating agency also reports positively on the inclusion of the Bulgarian lev in the Monetary Mechanism II and Bulgaria's accession to the Banking Union in 2020.

The two Bulgarian companies are among the fastest-growing IT companies in the Central and Eastern European region over the last four years, according to Deloitte Fast 50 Central Europe's annual report.

Allterco Robotics unit, which is part of Bulgarian Internet of Things products developer Allterco, has reported record sales of over 9 million levs (4.6 million euro) during its Black Friday and Cyber Monday campaigns. Allterco Robotics sold over 400,000 home automation devices at its online store and distribution network to clients from over 120 countries worldwide, Allterco said. The biggest interest emanated from clients in Germany, followed by customers in Italy and Portugal.

The NPP Kozloduy has notched a record profit for the first 9 months: 717 million levs. It's obvious why: the investment has long been paid, running costs are constant and electricity prices are through the roof. Yet the State takes away that profit to subsidise the business with it. This "nuclear option" has been instrumental in offering financial support in the form of compensation to the business users for the high price. So it's not so bad after all.

the ministers of Healthcare and Education have started a small civil war in the last days of the caretaker cabinet, as they seem unable to agree on how many COVID tests are available. This means that the return of pupils to in-person schooling might be postponed for yet another week.

the leader of the Socialist Party seems to be the last key to turn before agreeing on a cabinet. What does she want though, is a question with no clear answer - she was eager to negotiate last week but this week seems to have been placing more and more hurdles in the way.

The underground of Plovdiv, where a local man dug a 10 meter-deep corridor to get to the Roman remains of the city. It was discovered by accident by the neighbours, when a pathway collapsed inside. The man is charged.

Words of the week:

The first snow of the year often knocks the socks off the municipal authorities in Bulgaria's capital. So it came as a surprise that, this year Sofia Mayor Yordanka Fandakova did not say the cult phrase "Snega ni iznenada" (Snow surprised us) and actually the first, albeit minor, snowfall for the year did not cause much hassle in the city. Maybe, after all, we are improving?

2360 years after Phillip of Macedon named it after him, 136 years after it joined new Bulgaria, and 10 years after its new economic ascent began, Plovdiv greets a new arrival: the office of Capital.

It's always a thrill to discover new cities. They are full of adventures, new contacts, new places, new viewpoints, new fears and, of course, new passions.