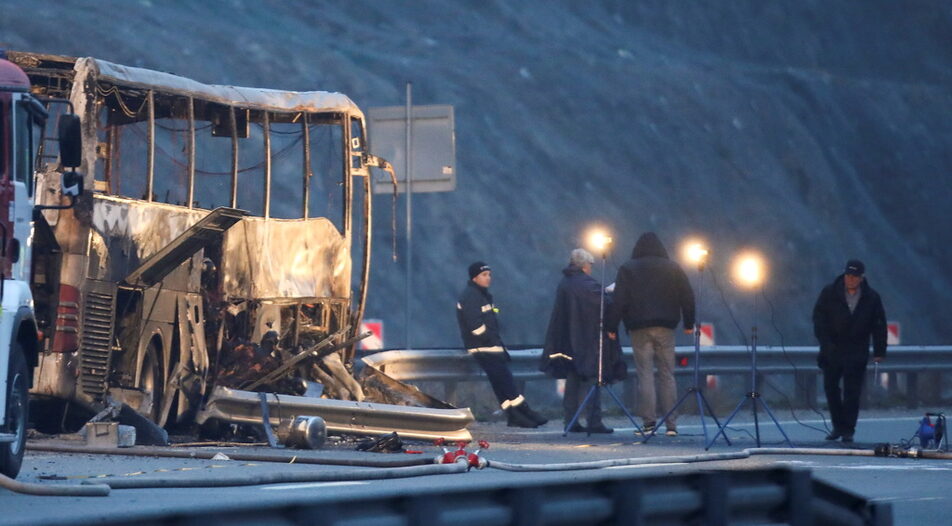 First came the conspiracy theories, many of which carried a thinly veiled racist and islamophobic subtext (most of the travellers were of Albanian origin, likely Muslim) - it was a terrorist attack, or they were illicitly smuggling fuel in unsecured bottles, which were set alight by the sparks. These were quickly debunked by the investigators.

Then all eyes turned to the driver. Maybe he fell asleep? The bus stopped for a break just 20 minutes before the fatal moment, however, which makes this scenario unlikely. "A human error," deputy Prosecutor General Borislav Sarafov said on Thursday. A paraphrased version of this explanation can often be seen in most road incident reports in Bulgaria as "nesaobrazyavane s patnite uslovia," which loosely translates as "failure to take account of road conditions".

But what exactly were the road conditions?

Even if the driver made a wrong call, he was likely misled by а poorly designed and maintained road, according to former racing driver Dimitar Iliev who also runs a safe driving academy. Using an old video he recorded at the exact spot of the accident and Google Street View, he explained what likely confused the driver: a rightmost lane that transforms from acceleration lane into an emergency one and then - into a abysmally constructed exit ramp leading to a poorly designed resting stop, all in a matter of a few hundred meters.

Additionally, it is all poorly marked with non-reflective paint, which has worn off, just like the light reflectors on the guardrails. And on top of all that - the sign that indicates the upcoming rest stop had simply fallen over - the driver just would not have been warned about it.

As with any incident on this scale, several factors were undoubtedly at play. But sometimes the cumulative risks, including negligence of basic road maintenance and safety duties - can make the difference between a normal trip and a national tragedy. So all in all, there is no fire without smoke - and Bulgaria is leading the chart in the EU for bus fatalities per capita. Even before this tragedy. Please take care on the roads - it's dangerous out there.

Throughout the week, We Continue the Change (WCC) - the brand new party that surprisingly won the first elections it took part in on 14 November - has been carrying out a series of 18 thematic expert meetings with the three other political forces deemed to be acceptable coalition partners - Democratic Bulgaria, BSP and TISP. With 3-4 experts on each side, what were the parties up to throughout the week?

The "online discussion" format chosen by WCC has its good and bad side - yes, the open debates between the party experts lend the proceedings transparency and are designed to eliminate any possibility of behind-the-scenes distribution of ministerial positions and other appointments. But, in the end, this is likely exactly what will happen in a few days' time - ministerial appointments will be approved behind the scenes based on the relative weight of the respective party's vote and leaders will have to agree to them before signing a coalition agreement. Let's not kid ourselves about that.

For now, what the public (and, yes you really can watch) gets are haphazard, long-winded talks filled with big promises for the bright future - a ministry of digitalization (because apparently having a state agency, which Bulgaria has had since 2016, is insufficient), chips in IDs that will allow e-voting, generic slogans about commitment to zero corruption, making Bulgaria a financial hub, dismantling the Specialized Judiciary and getting rid of Prosecutor General Ivan Geshev

It all sounds pretty good on paper, but

The big question is how feasible these plans are, especially for a coalition whose formation is still pending, and which first has to face rising electricity prices, exacerbated energy poverty, inflationary pressure, the continuing Covid crisis and various other known and unknown "ticking bombs" that the previous government has placed in key sectors of the Bulgarian state apparatus.

At least one thing is certain: Bulgaria reelected the incumbent, President Rumen Radev, for a second mandate. Mr Radev secured his mandate with a clear 2:1 advantage against his opponent, Sofia University rector Prof Anastas Gerdjikov, who made a less-than memorable run for the position on GERB's ticket. Yet, the winner ought not get too ecstatic about the result - he received the lowest number of votes in history for any presidential candidate (only about 1,5 million) and only 34.84 percent of those entitled to vote participated in the second round.

Another race of T-bonds

The Ministry of Finance sold another 500 mln levs worth of 7.5-year government securities on average yield of 0.49%. So, the government has placed a total 3.8 billion levs worth of domestic bonds since January 2021. The reported spread over similar German government bonds widened to 97 basis points as on the previous auction for 3.5 T-bonds it was about 80 basis points (or 0.8%).

The boom in housing loans continued at a record pace in October. The increase in bank portfolios in the segment is 16.49% on an annual basis, which is the highest value since 2009. According to Bulgarian National Bank statistics, the volume of housing finance provided by banks increased by 195 million levs in the previous month, reaching 13.7 billion levs. The rate of consumer loans is accelerating to 10.1% in October y-y.

The assets of mutual funds in Bulgaria have increased by nearly 2.5 billion levs y-y. They reach a total sum of 7.7 billion levs. This is due to both sales of new shares and an increase in stock prices. The investment funds of foreign management companies have the largest share - their assets worth 5.26 bln levs.

Bulgarian startup PlanDelta attracted an investment of 350 thousand euro of which 300 thousand euros are invested by the Eleven Fund, and the rest are provided by the American Christian Carillo in the role of a business angel. PlanDelta will use the fresh capital to create a prototype of their financial planning software, and the team expects this to happen by the middle of next year.

The largest online trading company in Bulgaria eMAG reported record revenues for Black Friday worth 55.9 million levs, up 17% from this day on previous year. The total goods ordered online from both eMAG and 1814 partners on the platform are 382 thousand products. Consumers have spent an average of 430 levs on their orders, which is up 61% compared to the previous year. eMAG, which is owned by the South African-based group Naspers, has reported that most orders have come from Sofia, Varna, Plovdiv, Burgas and Ruse.

One of the first topics discussed by the four potential coalition partners this week was energy politics. The experts from the four parties agreed that Bulgaria ought to maintain and develop its nuclear capacities, but never specified if they meant pushing forward a new nuclear plant in Belene or only upgrading the existing Kozloduy NPP. One option proposed by TISP is that the Belene site is used for the construction of a modern hydrogen plant. A second long-term plan that most party experts agreed on was the preservation of the Maritsa East complex and all the jobs of people in other coal regions. This includes bargaining with the EU for a maximum extension of the deadline for closing coal plants (the caretaker government has proposed 2038 as a deadline), as well as developing a list of alternative projects to keep Maritsa-East as an energy complex.

Kiril's Angels: This is how Sega newspaper commenter Petyo Tsekov dubbed the young (predominantly under-40s) MPs entering parliament from the WCC - most of whom are brand new to Bulgarian politics.

Paradise centre: the shopping mall (with a conference hall) is not only the place where Black Friday sales will likely kick off today, but also the location chosen by WCC for the expert coalition talks.

28 November: the deadline President Rumen Radev set for himself to announce when he will issue the bill to convene the next Parliament.
Words of the week: Trudovi lageri (Labour camps)

You don't like the idea of Bulgaria continuing to pour billions into the bottomless pit that the Belene Nuclear Power Station project has turned out to be over the past three decades? You are going to a trudov lager, or labor camp in English, if it is left to radical Vazrazhdane party leader Kostadin Kostadinov to decide. Mr Kostadinov lashed out at opposition to the Belene nuclear project expressed by DemBG politician Martin Dimitrov during the cabinet negotiations, saying that "American agents" like Mr Dimitrov have been pushing an "anti-Bulgarian" policy and have worked incessantly for the destruction of Bulgaria. His verdict - all opponents of Belene, and other projects that mostly benefit Russia - will be sent to work on them as forced laborers once Mr Kostadinov's party takes over.