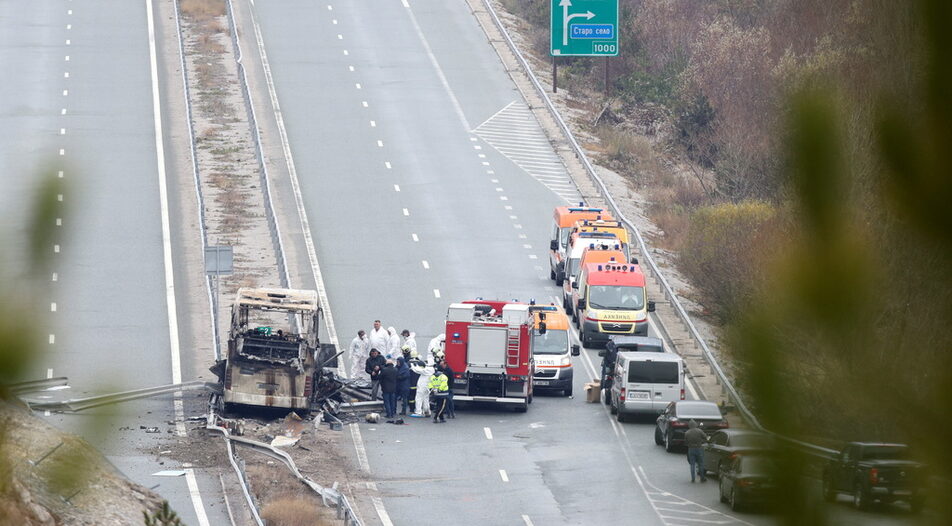 Good evening on a truly terrible day. First, there was a fire in a nursing home near Varna yesterday evening, killing 9 people. Still reeling from that tragedy, Bulgarians woke up this morning to news of devastating carnage on the highway.

A bus traveling from Istanbul to Skopje crashed early this morning on the highway near Sofia, exploding and burning to the ground. 46 of the passengers died in the hellish accident, at least 12 of them were children. There are several survivors who are being treated in Sofia's hospitals. The North Macedonian prime minister Zoran Zaev arrived immediately in Sofia, together with several other ministers. The reasons for the crash are still under investigation, although it is probable that the driver lost control, hit the traffic barrier and something in the bus exploded.

Cabinet negotiations start in 4 groups: all is fine

Economy, Justice, Energy and Transport - those are the first working groups to discuss the future coalition government. They are made up of members of the winning party We continue the Change, Socialist party, Democratic Bulgaria and There is Such a People. There seems to be an understanding between the parties about common goals and matters are apparently proceeding smoothly. 14 other groups remain until Saturday.

The Bulgarian fintech gets 112 million dollars of funding in a Round B for venture capital. This is the second investment round for the company after the first one in April. It raises dramatically the evaluation of Payhawk from 80 to 570 million dollars. Payhawk is a Bulgarian founded company that issues corporate debit cards and a platform for expenses management. This is the second largest venture investment in a B2B company in CEE region after the Romanian UiPath.

Good evening on a truly terrible day. First, there was a fire in a nursing home near Varna yesterday evening, killing 9 people. Still reeling from that tragedy, Bulgarians woke up this morning to news of devastating carnage on the highway.