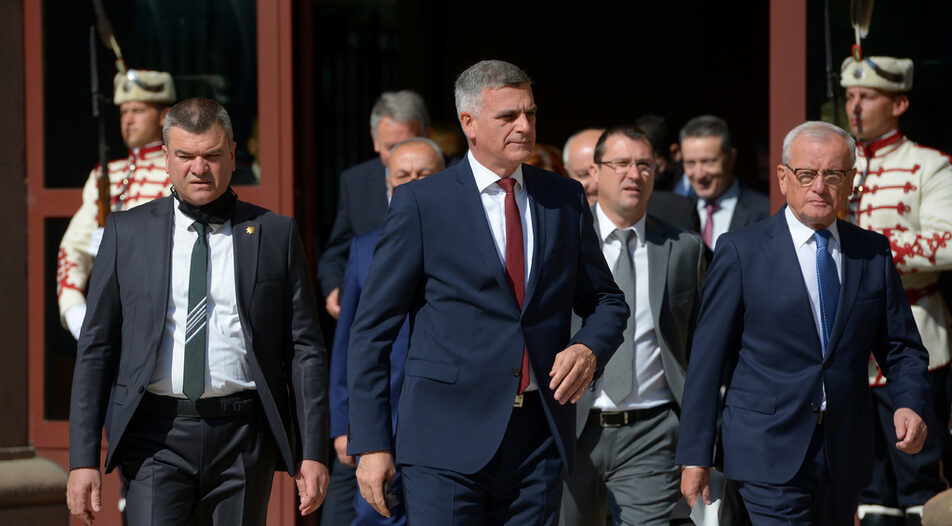 Evaluating the achievements and failings of a caretaker government would be strange in normal circumstances. Such a cabinet has two simple purposes - to uphold state functions during the interim period before the early election and to organize it in an orderly fashion. The case of the first caretaker government of Prime Minister Stefan Yanev, appointed in early May by President Rumen Radev, was quite different, however.

It's no understatement to say that this has been the single most active and turbulent caretaker cabinet in modern Bulgarian history. Some caretaker ministers certainly rumbled the political status quo, having claimed to have exposed significant instances of grand corruption, mismanagement and poor governance in various state institutions. This brought them immense popularity and great political career potential for two of them in particular.

But their attempts to provide quick fixes were not always successful, or sustainable in the long run. Below, you will see Capital Weekly's appraisal of their successes, as well as occasions where they failed to deliver on the overblown (and somewhat unrealistic) expectations placed on them.

Two of the most important figures in the Yanev cabinet were also longstanding political players. Justice Minister Yanaki Stoilov had been MP from BSP for decades before May, while Boyko Rashkov, who heads the Internal Ministry, has been well-known in police structures since the 1990s.

Given that the caretaker government's primary role is to carry out free and fair elections, let's examine the role of Mr Rashkov in this process. From his first day on the job, he said he would crack down on vote-buying schemes that have long dogged Bulgaria's elections and possibly even swung them in a particular direction. Under the new caretaker minister, the Internal Ministry probed potential risk polling stations, replaced key police chiefs who had failed to fix vote-rigging, identified "vote merchants" and pressured them before the vote. Observers claim that about half of the decline in voter turnout (about 275,000 votes) could be linked to these actions.

On the justice front, the two ministers launched a two-pronged attack against Prosecutor General Ivan Geshev. First, Mr Rashkov published a report with dozens of examples of Mr Geshev's mishandling of cases, abuse of office and illegal operations. Then, Mr Stoilov used the report to pressure the Supreme Justice Council (SJC) to dismiss the acting Prosecutor General. The attempt ultimately (and expectedly) failed on procedural grounds, but gave a useful tool to a willing future parliament to introduce new ways of keeping the chief prosecutor and the SJC accountable.

Other small victories of the two ministers included Mr Stoilov's reforms to the Registry Agency, which fixed longstanding problems with business registrations, as well as Mr Rashkov's move to expose illegal wiretapping of dozens, perhaps even hundreds, of opposition politicians by different police structures.

It's no understatement to say that this has been the single most active and turbulent caretaker cabinet in modern Bulgarian history.

All these efforts, as well as Mr Rashkov's focus on vote-buying and the emphasis he put on GERB's role in this, earned the Internal Minister stiff rebukes from sections of the former ruling party. So far, these have amounted to claims about "political purges" in the police and pressure against political activists of GERB, but none have reached court or even the prosecution services.

It is easy to criticize, but is it easy to reform? Economy and Finance ministries

The two ministers most beloved by the public - and as vilified from all sides just as much as Mr Rashkov - were Kiril Petkov and Assen Vassilev. They headed the important Economic and Finance ministries, respectively, and used their office to highlight GERB's serial (and blatant) abuses of these ministries in the past.

Some of their victories are indisputable. Like the fight for the Bulgarian Development Bank that saw Mr Petkov change the managing board and the rules for distributing credits. First, he exposed the biggest clients of the bank, who turned out to be (as expected) a handful of companies, mostly linked to oligarchs such as Delyan Peevski and Rumen Gaytanski. Then he waged a three months-long battle with the board of the bank to change key managers and set a rule that the biggest credit the bank can issue is 2,5 million euro, while in the past only 20 firms received the lion's share of the bank's lending - over 700 million euro.

Or Mr Vassilev's successful uphill battle to update the state budget, and especially to increase state pensions before an inevitably hard and expensive winter. The attempt to fix the budget amidst a short-lived, elections-focused parliament could have easily opened a "Pandora's box" of populist spending that could have threatened the stability of the state coffers. Yet, fortunately, this bullet was dodged. The Finance Minister also exposed GERB's schemes of allocating large infrastructure public procurements to a cartel of companies without any scrutiny, but still had to negotiate promised overdue payments with the same companies.

The two largest ongoing scandals surrounding the two otherwise popular ministers concern the appointment of Rumen Spetsov as head of the Revenue Agency by Mr Vassilev, and the issue of Mr Petkov's Canadian citizenship. A journalist investigation from May found that Mr Spetsov had managed a heavily indebted company that he sold to a "professional debtor," a straw man who is unable to pay the firm's debts. Despite the ensuing scandal, Mr Spetsov remained in office. His efforts focused on larger corporate taxpayers and oil and gas companies rather than on small firms. This divided business, but also increased collection rates, although it is hard to estimate whether this is due to NRA's own efforts or due to the quicker than expected economic recovery in the private sector.

The debacle over Mr Petkov's Canadian citizenship might have boosted his popularity, but is still unresolved because he has not presented the document indicating he no longer holds his second citizenship. In addition, the Constitutional court has still not ruled whether his appointment was anti-constitutional. A decision against his claim might be used as a kompromat harming both him and President Radev in the upcoming elections.

In more general terms, only time can tell whether the personnel changes in key places would be enough to ensure that the institutions the two entrepreneurs tried to reform can evade state capture in the future.

Next comes the youngest member of Mr Yanev's cabinet, deputy Prime Minister responsible for the European funds Atanas Pekanov. He launched an ambitious plan to reform the draft Resilience and Recovery plan, which Bulgaria had to send to Brussels a few months ago in order to benefit from the much-needed 6 billion euro financial stimulus.

Unfortunately, this did not happen - the attempt to revamp the plan and make it more inclusive was stonewalled by private interests of various ministries and other budget institutions that tried to introduce last-minute changes to their benefit. This means Sofia still has no access to advance payments under the scheme, but barely touched the initial plan as well. As there have been no changes to the draft plan made since July, it is unclear what engages Mr Pekanov right now and the nature of his role in the second caretaker government.

The following three ministers proved disappointing - Transport head Georgi Todorov (who became the only replaced minister in the second cabinet, besides Mr Petkov and Mr Vassilev who left on their own accord), Energy Minister Andrey Zhivkov and Regional Development Minister Violeta Komitova.

Ms Komitova helped Mr Vassilev expose many of the schemes used by GERB to allocate infrastructure projects to friendly companies. She raised eyebrows, however, with her appointment of deputies (three of them have already been dismissed - for no clear reason) and for failing to reform the struggling toll system and the mechanism for allocation of public money for road construction.

Mr Todorov practically tried to cover up how the state financed the controversial works in the Varna harbor, which were done solely to benefit MRF head and businessman Ahmed Dogan. This is likely the reason he lost the position last week.

Finally, Mr Zhivkov, who would have always faced an uphill battle in the energy sector, failed to find a way to control the price shock of the last few months, did not make many management changes in the regulators that remain under GERB's control and largely failed to expose the schemes of the former ruling party that prioritized the construction of TurkStream rather than the Bulgaria-Greece Gas Interconnector to the benefit of Russia.

Finally comes the Health Ministry, where Mr Katsarov began his tenure with a promising speech about the importance of getting vaccinated. Unfortunately, so far the ministry has failed with this crucial task, as Bulgaria remains at the bottom not only of the EU, but also of the European vaccinations ranking. It is hard to estimate if the Minister could have done much to improve this, but efforts to promote immunization could surely have been greater.

The same goes for his attempts to push for market-oriented reforms in the hospitals, which ended up with personal quarrels with doctors, including Mr Katsarov's own doctor and the popular infectionist Todor Kantardzhiev.

Evaluating the achievements and failings of a caretaker government would be strange in normal circumstances. Such a cabinet has two simple purposes - to uphold state functions during the interim period before the early election and to organize it in an orderly fashion. The case of the first caretaker government of Prime Minister Stefan Yanev, appointed in early May by President Rumen Radev, was quite different, however.

It's no understatement to say that this has been the single most active and turbulent caretaker cabinet in modern Bulgarian history. Some caretaker ministers certainly rumbled the political status quo, having claimed to have exposed significant instances of grand corruption, mismanagement and poor governance in various state institutions. This brought them immense popularity and great political career potential for two of them in particular.