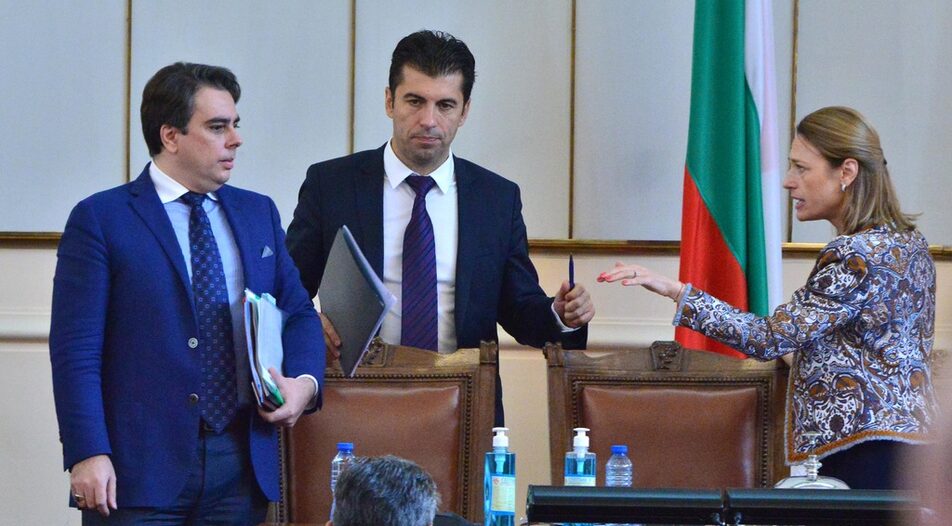 The second cabinet appointed by President Radev this year is notable mostly for its absentees - Finance and Economy ministers Vassilev and Petkov, who will now be entering the political fray

If you think Bulgarian politics was overly exciting in the last few months (and lots of people do) today marks somewhat of a pinnacle.

Its members are virtually the same, except for three people.

Two of the most popular figures of the first Stefan Yanev cabinet - Kiril Petkov and Assen Vassilev, who headed the Economy and Finance ministries respectively, are the most conspicuous absentees. The move was largely perceived as a prelude to the "Harvards" - as the duo is often named thanks to their education at the elite university - entering politics with their own new formation.

"I'm saying it loud and clear - we will be entering politics, we will be taking an active part in the political life of the country" - Kiril Petkov, former caretaker Economy Minister
Advertising

And so they did - an hour after Mr Radev appointed the new cabinet, Mr Petkov told reporters: "I'm saying it loud and clear - we will be entering politics, we will be taking an active part in the political life of the country."

The new formation is expected to enter the upcoming "2 in 1" Presidential and Parliamentary vote on 14 November. With the entrance of the Petkov-Vassilev wild card, this already unique double election is likely to shake up Bulgarian politics profoundly before the end of the year.

What are Petkov and Vassilev up to?

So what are the two popular ministers planning to do? This is now the pivotal question. So far, it appears to be a new movement - likely a civic platform that will use the registration of other party(ies) to take part in the upcoming elections, since there is very little time to launch and register a party in line with legal requirements.

Additional details about the project are scarce. Mr Petkov and Mr Vassilev have so far kept a veil of secrecy around their plans, leading to tons of speculation from well-wishers and opponents alike. One name proposed for the new platform, and leaked by "24 hours", is Promianata Prodalzhava, standing for "The change continues''. This alludes to the duo's affirmed determination to continue dismantling the oligarchic model that has been governing Bulgaria.

The new movement will likely be a centrist-left faction with (inevitable these days) populist elements. Several signs support this theory. Mr Vassilev pushed for a long-postponed overall recalculation of state pensions over the last three months (Mr Petkov commented that "I might have right-wing [economic] beliefs up to a certain point and that point is 42 percent of the elderly living below the poverty line."). This parachutes them straight into political territory traditionally occupied by BSP.

He also mulled renegotiating the concession fees paid by international companies in Bulgaria, which he deemed too low - a topic hitherto expropriated by the radical Vazrazhdane ("Revival") movement which is posed to make electoral advances in the upcoming vote. And the two spoke out against the closure of the financially bankrupt and inefficient Maritza East energy companies earlier this week.

Nationalists and leftists, get ready to go down

Their focus on these issues - largely irrelevant to the urban intelligentsia represented by Democratic Bulgaria - indicate that Mr Petkov and Mr Vassilev are targeting parts of the left-leaning and nationalist vote, rather than competing with the center-right faction of Hristo Ivanov.

Several Socialist MPs, wary of the duo's encroaching designs on their base, have accused them of probing regional BSP structures for potential support. Socialist leader Kornelia Ninova even pressed President Rumen Radev - considered the patron of the Vassilev-Petkov project by some - to reiterate his allegiance to the party that nominated him five years ago.

Mr Radev was rumored to have reservations about the duo's dash into politics. He had probably counted on keeping them in office for the next few months. But Mr Petkov and Mr Vassilev went against his better judgement in order to cash in (electorally) on the popularity they have enjoyed over the past three months. A recent sociological survey by Market Links showed that they are basking in a 43- and 31-percent approval rating, respectively - dwarfed only by the President's own rating.

Their clever hedging on the political spectrum, and the position they took on the Maritza East basin (considered a place of national security importance), has also paved the way for the faction to woo some of the nationalist vote.

"We believe in attaining left-wing goals with right-wing instruments, such as keeping taxes low, and eliminating corruption. This will lead to prosperity and higher income for pensioners, better education and healthcare," Mr Petkov said on Thursday. Only time will tell if these well-meaning wishes will win votes - and whether they could materialize after that.

Whatever the outcome, one thing is clear - the entry of the new force into the double election on 14 November will make the campaign much tougher for all participants. The parties - which have still not nominated any serious contender to take on incumbent candidate Mr Radev - will now have an additional worry, a brand new popular faction entering politics with serious momentum.

Who are the new faces in the second caretaker gov't?

Three new ministers swore oaths on Thursday. Daniela Vezieva takes over Mr Petkov's place at the helm of the Economy Ministry. She used to be a deputy Economy Minister during the second government of GERB's Boyko Borissov as a representative of the party's minor partner at the time, the Reformist Block. Ms Vezieva graduated from the Svishtov Economic Academy and started her career as a head of unit in the Education Inspectorate of her native Ruse. She has also represented Bulgaria in the Budgetary Committee of the European Schools, which are official educational establishments controlled jointly by the governments of the EU Member States.

Ms Vassilev's replacement in the Finance Ministry is Valery Belchev. Another Harvard graduate, Ms Belchev presided over the so-called Fund of Funds during the second Borissov cabinet and has since headed the Business Development department at the Bulgarian Development Bank. He has worked for several large commercial banks, including HSBC, Credit Agricole Indosuez, Fortis Bank and Societe Generale between 2000 and 2006.

Finally, the new Transport Minister is Hristo Aleksiev. He replaces Georgi Todorov, as the latter failed to explain why his ministry continued to support the state-funded excavation operations in the Varna Lake that benefit MRF politician Ahmed Dogan, who controls a small new port that will compete with the state-owned Port of Varna. Mr Aleksiev has headed the managing council of the Railway Infrastructure State Company until now and is considered an expert in the field of railway transportation in the country.

If you think Bulgarian politics was overly exciting in the last few months (and lots of people do) today marks somewhat of a pinnacle.