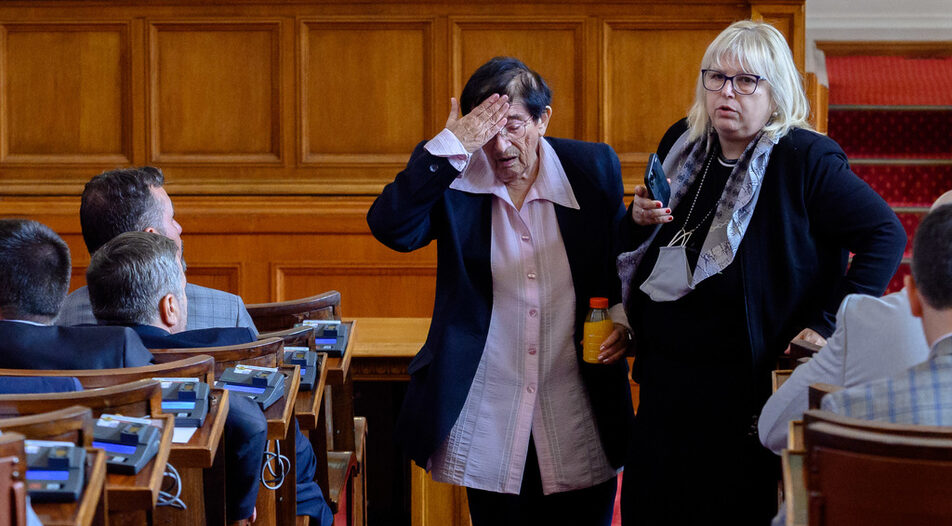 Recent event in Parliament give headache not only to the oldest MP, Mika Zaykova from TISP

With parliament’s days numbered, uncertainty reigns - especially over the logistics of the third national election

Recent event in Parliament give headache not only to the oldest MP, Mika Zaykova from TISP

// Two things became clear this week: it it is increasingly likely that Stand up BG might disintegrate before the upcoming early elections and not make it into the next Parliament and TISP are no longer a "protest" party with the primary goal of taking down GERB

A total free-for-all. This is the state of play of Bulgarian politics in early September after BSP returned the third and last mandate to President Rumen Radev on Tuesday, heralding a second early vote, and a third overall Parliamentary election this year.

Parties have been mudslinging - including over corruption allegations - only to form unholy alliances on specific topics a few days later. Parliament is in total chaos, with MPs backing one version of the budget revision in the Budgetary commission and then - a completely different one in the General Assembly.

Former Prime Minister Boyko Borissov has already entered election campaign mode, riding a Shkoda (after they took his Toyota jeep) around villages and unfinished highways, bashing Mr Radev as a "disunifier" on the day of National Unification, 6 September.

Meanwhile, the much anticipated new political "project" of caretaker ministers of Economy Kiril Petkov and Finance Assen Vassilev - remains an enigma that, once revealed, would certainly shake the political landscape. Coupled with risks posed by the new Covid wave, migration pressure and increasing energy prices Kapital Insight already warned you about, this promises to be an interesting political autumn with many imponderables ahead. So let's go through the main ones.

The situation in the National Assembly became increasingly frenzied last week, signaling a pre-election footing. The first sign came at the end of last week, when TISP MP Toshko Yordanov accused one of Stand up BG leaders - Tatyana Doncheva - of offering one or several MPs from Slavi Trifonov's faction 250,000 euro to switch sides. While Mr Yordanov did not produce evidence to back this claim of an attempted bribe, and one of the TISP MPs that was supposedly "coaxed" by Ms Doncheva back pedaled on the initial claims of his party group's head, the damage seems to have been done.

Tabloid sites, especially those close to GERB, picked up on TISP's accusations against the Stand up BG politician and launched a vicious campaign against her, later followed by the Specialized Prosecution announcing an investigation. That, in turn, led to turmoil within the smallest coalition in parliament - one of the small parties that is part of it (Volt) announced it is leaving it on Tuesday, while two of the most well-known protest leaders of last summer and Stand up BG MPs - Nikolay Hadzhigenov and Arman Babikyan, turned against Ms Doncheva. On the other hand, the most recognizable face of Stand up BG, Maya Manolova, gave her backing to Ms Doncheva.

The two lessons from this strange story are 1) that it is increasingly likely that Stand up BG might disintegrate before the upcoming early elections and not make it into the next Parliament and 2) that TISP are no longer a "protest" party with the primary goal of taking down GERB. Instead of going after their supposed nemesis (Mr Trifonov repeated for months that his party's main goal is to remove Mr Borissov), the faction is increasingly focusing fire on other "protest parties" - Democratic Bulgaria and Stand up BG. This is probably an attempt to clear up the "protest" field solely for themselves, but the likely effect is erosion of popular trust in anti-status quo forces.

A second sign of pre-election sabre rattling is how they approached the attempt by the President and Finance Minister Vassilev to revise the state budget. While all factions - bar GERB - initially backed Mr Vassilev's propositions to increase state pensions by 12.5 percent last week, when it came to approving the amendments in the General Assembly, they acted as if they never approved anything.

A whole avalanche of proposals came in on Tuesday, with GERB, BSP and MRF outbidding each other with proposed bonuses to pensions - on top of Mr Vassilev's proposed increase. The bonuses ranged from 50 to 60 euro per month until the end of the year, or about 125 million euro per month more than what the Finance Minister planned. While the parties first passed the combination of general pension revision and bonuses, which Mr Vassilev said "threatens blowing up the budget," in the end they seem to have come to terms with reality and agreed to have the overall increase from January and the 60 euro bonus - for the last three months of the year. The final vote is still pending, but it surely shows the parties' readiness to destabilize the state coffers in their attempts to curry favor with pensioners.

How many days of elections - and when?

Now that two more elections are clearly due by the end of the year - the Presidential and the early Parliamentary ones - some other questions need answering. Most importantly, will they take place simultaneously or on different dates? All we know so far is that the first round of the Presidential vote will take place on 14 November, with a potential runoff the following Sunday, 21 November. Whether the early Parliamentary vote would overlap with one of these dates remains open.

The ball is now in President Radev's court. He received the unfulfilled final mandate to form a cabinet from BSP on Tuesday and is expected to make a decision and publish the decree for dissolving the acting Parliament and calling new elections in the next few days. On Wednesday he met with the Central Electoral Commission (CEC) to discuss which option is better - for votes taking place on three different Sundays, or for a "2 in 1" vote - and CEC said it is ready and able to pull the second option off. The first option might incur much higher financial costs for the state and would likely shorten the campaign for the Parliamentary vote, as CEC asked for at least two weeks' gap between the two votes (which would mean Parliamentary vote on 31 October at the earliest - just six weeks from now). The second one, however, might mean mixing up the Presidential and Parliamentary campaigns, which would certainly alter the dynamics of both competitions. Talking about competitions

Who wants to (try to) be President?

For now - nobody, apart from the incumbent, Mr Radev. While Bulgarian parties traditionally postpone their nominations for Head of State until the last possible moment to prevent tabloids dishing dirt at them, this time around there are additional factors.

First of all, Mr Radev seems a shoo-in for reelection. He is popular, especially in the last year when he has been perceived as an antipode to Mr Borissov. The caretaker government he nominated is also Bulgaria's most popular in decades. And he already has the support of three parliamentary factions - TISP, BSP and Stand up BG. The best the other parties, GERB included, can hope for is to nominate someone to lose honorably against him.

Democratic Bulgaria simply lacks the resources to carry out two simultaneous campaigns, while GERB does not have any person they can nominate, except for Mr Borissov who is not believed to be ready to lose a duel against his most popular opponent.

The Harvards waiting in the shadows

Add to that the speculation about the future political plans of Economy and Finance ministers Kiril Petkov and Assen Vassilev (referred to as "the Harvards," as they graduated from the prestigious US school) and you add further uncertainty. The two were described by Market Links as the most popular and approved caretaker ministers from the Stefan Yanev cabinet two weeks ago, spurring an avalanche of theories about their plans to create a new party. Political scientists and sociologists across the board added oil to the fire, saying that such a political force might shake up Bulgarian politics fundamentally.

Yet, it remains unclear what Mr Petkov and Mr Vassilev have in mind - starting their own party, trying to form (and later head) a cross-party coalition with the President's backing, or simply joining Democratic Bulgaria, with which they previously sympathised. Their potential success - or failure - also depends on the timing of their move and how it is received by the main parties, who are at odds with each other and some openly confront them. This animosity is understandable - all of them risk being sidelined by a potential "Harvard" project.

So it is that Bulgaria enters the fall political season in an atmosphere of complete uncertainty and vacuum that might cost Bulgarians dearly, having in mind all the looming crisis.

// Two things became clear this week: it it is increasingly likely that Stand up BG might disintegrate before the upcoming early elections and not make it into the next Parliament and TISP are no longer a "protest" party with the primary goal of taking down GERB

A total free-for-all. This is the state of play of Bulgarian politics in early September after BSP returned the third and last mandate to President Rumen Radev on Tuesday, heralding a second early vote, and a third overall Parliamentary election this year.