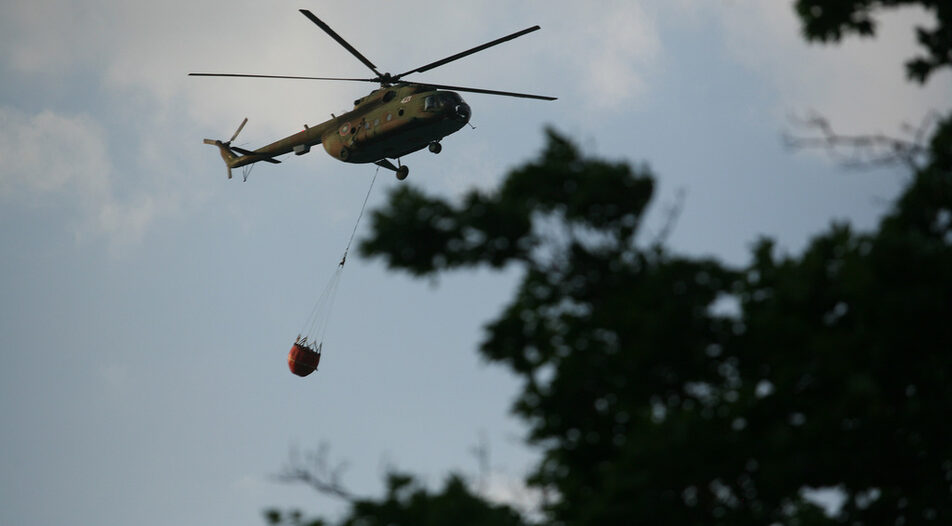 The "Bambi Bucket" system on a Mi-17 helicopter in action

A summer of scorching heat and forest fires across the mountainous country put people and nature at risk, highlighting the need for the state to be better prepared

The "Bambi Bucket" system on a Mi-17 helicopter in action

Record high temperatures in several major cities and forest fires across the country leaving two forest rangers dead and rendering dozens of village people homeless. This is the picture in Bulgaria in the summer of 2021 - the year the World Meteorological Organization has said would likely be one of the three hottest since the start of weather observations at the end of the XIX c. This is not a local event: the whole of Southern Europe is burning. Apocalyptic images of infernos engulfing the Turkish coastal resort or Marmaris and hills surrounding Athens in Greece show that the entire region is under serious strain.

According to aviation experts, two helicopters would suffice for the immediate needs of the country, with one or two more to be added at a later stage

As the latest Intergovernmental Panel on Climate Change (IPCC) report from 9 August showed, scientists from across the globe project that in the coming decades climate changes will cause more heat waves, longer warm seasons and shorter cold seasons. "At 2°C of global warming, heat extremes would more often reach critical tolerance thresholds for agriculture and health, '' the report warns. How well-prepared is Bulgaria to face these sorts of crises that would most likely become more frequent?

Unprepared again - for the last time?

The bad news is that the state welcomed the annual "fire season" with a single military helicopter capable of extinguishing fire from the air and an undermanned firefighting capacity on the ground.The army and a small but dedicated cohort of volunteers came to the aid of strained firefighters on many occasions in the past two weeks. On the positive side, the current caretaker government seems more committed to take serious action in order to tackle the problem. And apparently it is already being worked on, at least on paper.

"Yes, you are right, unfortunately we currently have only one Air Force helicopter in the field. From Tuesday there will be another and within 10 days, likely a third. That is our capacity at the moment," caretaker Prime Minister Stefan Yanev told Parliament last Thursday. "If the situation does not improve, we will have to ask for help from another country with aircraft under the EU Civil Protection Mechanism, since ours is insufficient," the prime minister concluded.

European funds come to the rescue

This was not your traditional excuse of a politician, though. According to Yanev, the caretaker administration has made the "first half-step" towards establishing special capacity for action in emergency situations. "In the EU Sustainability and Recovery plan we dedicated funds for the purchase of medical helicopters. Which is good, it is perceived positively by the public because we have such an urgent need for that," Yanev said. According to him, the purchase of Medevac choppers will also be the first step of a much larger initiative for air action in the event of crises.

"On the topic of the need for helicopters and aircraft for the emergency services, we came to the conclusion that it would not be a bad idea to create an overarching state structure in the form of a state agency, which would include not only medical helicopters, but also fire-extinguishing helicopters and other emergency aircraft," the prime minister added.

Of course, this would be a lengthy process that goes way beyond the term of a caretaker government. It would require not only political consensus, but also the approval of several existing state agencies, including parts of the ministries of the interior and defense.

So far, the idea of creating a common crisis structure has received the support of Chief Commissioner Nikolay Nikolov, head of Fire Safety and Population Protection Directorate General at the Ministry of the Interior. "It is beyond the power of any single ministry to establish and maintain a structure like this on its own," he told Capital Weekly. To him, the moment to form such a structure is perfect, as the country is eligible to receive close to 100 million euro from the EU under the Recovery Plan, in addition to more funding under the rescEU plan for the purpose. According to Nikolov, it is not so important whether the new structure will be a government agency or a state-owned enterprise, neither under which ministry it will be. To him, the top priority now is for the Council of Ministers to launch it as soon as possible and appoint a team of experts to plan its development.

The choppers are here, but are not read

The sad reality today is that Bulgarian firefighters have no blaze-extinguishing choppers of their own, despite having tried to acquire them twice - in 2013 and 2019. The interior ministry has several observation helicopters used by the Border Police, but they cannot be fitted with fire-extinguishing systems.Only the Bulgarian Air Force can provide assistance to the Fire Service in case of approval by the Bulgarian chief of defense. On paper the military has 12 Cougar and 5 Soviet-made Mi-17 choppers that can be fitted with the Bambi Bucket fire-extinguishing system capable of lifting 2 or 3 tons of water for the European and the Soviet choppers, respectively.

In practice, however, the long-standing problems within military aviation mean that very little of this capacity can be used. The crews of the Mi-17s have very little flight hours due to lack of funds for maintenance of their aircraft, while most of the Cougars are left grounded to be used as a source of spare parts and are not operable at all.

Of course, with some effort and dedicated funding this can quickly change. According to aviation experts, two helicopters would suffice for the immediate needs of the country, with one or two more to be added at a later stage. Helicopters are preferable for Bulgaria compared to planes, as the latter would require long stretches of water to be refilled - over 1,5 km in length, to be precise. There are not enough such water basins in the country besides the Danube river, Iskar reservoir near Sofia and the Black Sea, which makes helicopters with their ability to hover above any stretch of water to reload a better option for the country.

Next comes the question of which institution should manage the new emergency service. The easiest solution is to have it under the Air Force or the Ministry of the Interior, which both have trained pilots who won't have to be recertified to start flying. This would be required in case a public-private partnership with brand new choppers and crews is chosen as the modus operandi (this is how the system operates in Greece, Spain, Turkey and Portugal). This, in turn, brings the question of whether the state ought to buy brand new machines or retrofit some of the unused military aircraft at the state-operated maintenance companies Avionams and Terem, and then transfer them to the new agency. The latter would be the quickest and most straightforward option, if the military gets on board. When all of this is settled, however, the question of how prepared pilots are remains open. As the recent tragic story of Mig-29 fighter pilot Major Valentin Terziev showed, low flight hours and inadequate training might have dire consequences.

Record high temperatures in several major cities and forest fires across the country leaving two forest rangers dead and rendering dozens of village people homeless. This is the picture in Bulgaria in the summer of 2021 - the year the World Meteorological Organization has said would likely be one of the three hottest since the start of weather observations at the end of the XIX c. This is not a local event: the whole of Southern Europe is burning. Apocalyptic images of infernos engulfing the Turkish coastal resort or Marmaris and hills surrounding Athens in Greece show that the entire region is under serious strain.

According to aviation experts, two helicopters would suffice for the immediate needs of the country, with one or two more to be added at a later stage