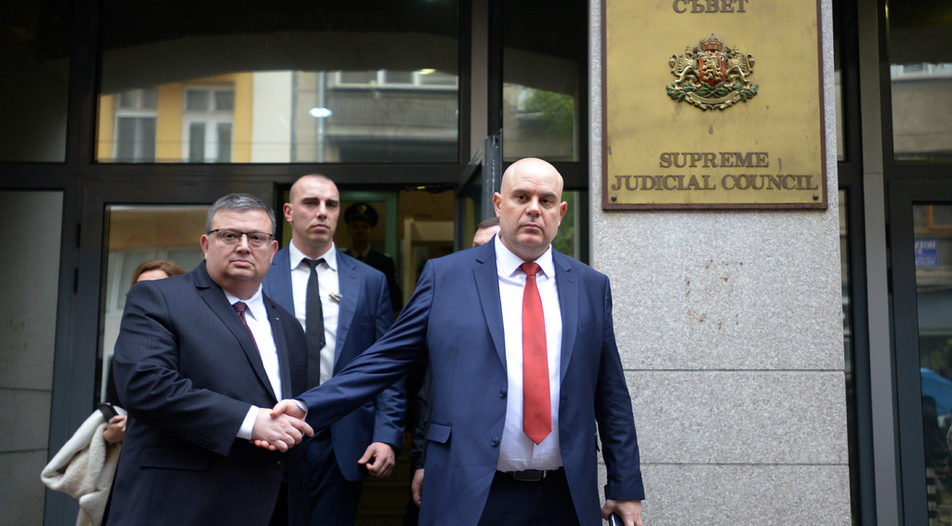 It is hard to imagine where the duo of Mr Tsatsarov (on the left) and Mr Geshev would take the fight against corruption to in the next seven years, but it seems more than likely that they would wield the might of their two institutions to suppress dissent even further

Ivan Geshev, a self-described "boy from the city’s suburbs", will become Bulgaria’s next prosecutor general in January. His selection will have dramatic implications for the rule of law

It is hard to imagine where the duo of Mr Tsatsarov (on the left) and Mr Geshev would take the fight against corruption to in the next seven years, but it seems more than likely that they would wield the might of their two institutions to suppress dissent even further

"I am not a systemic player - I am a boy from the periphery of the city. It is payback time for everyone who stole from the state."

No, this is not a one-liner from Sylvester Stallone's unforgiving mercenary character in the latest Expendables movie filmed at Boyana Studios. It is a direct quote of Ivan Geshev, the next prosecutor general, from his first TV appearance after he became the sole nominee for the post in July this year.

Little has changed since. Mr Geshev remained the only nominee to take over from his current boss, Sotir Tsatsarov, and he did not alter his tone when speaking to the media. On 26 November - the day President Rumen Radev signed the decree for his appointment - he remained condescending, rude and unrepentant when journalists asked serious questions about his work on key investigations of public interest. "The prosecution is accountable enough," he replied when asked to comment on the president's words from five minutes earlier that "in the Bulgarian constitutional model the accountability of the prosecutor general ends with his appointment".

Pressed to comment on whether eight months was long enough for his institution to complete the investigation into the purchase of underpriced flats by high-ranking officials from the ruling GERB party (the so-called Apartmentgate that led to several top-level resignations in April), the next prosecutor-general just ignored the questions. Mr Geshev evaded all questions regarding his inaction in prosecuting the powerful of the day. Instead, he yet again pointed a finger at what he described as a "politico-oligarchic circle" that had allegedly "created the myth that an institution [the Prosecutor's Office] is bad". This is by no means the first time Mr Geshev has openly admonished Economedia, the publisher of Capital weekly and KQ, for its critical editorial stance on the work (or lack thereof) of the prosecution. His words are a warning sign of what the forthcoming seven years of his term will usher in, perhaps not for the people who "stole from the state", but for opponents of the status-quo in the judiciary and politics.

"Nothing to be ashamed of"

"I have nothing to worry about or be ashamed of. I am an average Joe," Mr Geshev told public television BNT in the same interview referenced earlier. Yet, there is little he and the institutions he had been affiliated with since his career skyrocketed in 2013-2014 can be proud of either. As President Radev duly underlined in his succinct public statement after he signed the decree for Mr Geshev's appointment, one of the main problems of the Prosecutor's Office is that it works selectively on high-profile cases related to politically connected persons. He noted Apartmentgate, the culprits for the bankruptcy of Corporate Commercial Bank (Corpbank), the hidden offshore accounts of politicians and high ranking officials, and other public scandals that have been swept under the carpet by investigators over the past couple of months.

A few days before Mr Geshev's appointment, media reported that the National Revenue Agency had probed the financial records of a number of politicians implicated in the Apartmentgate scandal and had sent the information to the prosecuting authorities. So far, neither indictments, nor acquittals, have followed. It is quite possible that the Prosecutor's Office didn't want to drop the case before the election of Mr Geshev, which would have caused a public uproar. But it will most probably happen, because the Corruption and Illegal Assets Forfeiture Commission (CIAF) has already cleared all of the former high-ranking members of the ruling GERB party of any wrongdoings.

At the same time, more than four years after the opening of the Corpbank case there are gaping holes in the indictments of the prosecution. Mr Geshev initially took part in the investigation which ignored any evidence against Delyan Peevski, an ex-business partner of the bank's CEO Tsvetan Vassilev, of helping to siphon off hundreds of millions of euro from the bank. Mr Peevski, unlike Mr Vassilev, has a mighty political backing. None of the high-ranking public servants who failed to prevent the collapse of the then fourth biggest lender in Bulgaria have been convicted either.

A missed chance or an overblown hope

There is little consolation in President Radev's announcement that he would launch a public debate about the place of the prosecutor's office in the judiciary and whether this should lead to changes in the constitution. In spite of his (hopefully) good intentions, there is no parliamentary majority, or even a significant enough minority in the current National Assembly, to pass such changes.

While the president justified the endorsement of Mr Geshev's appointment (which he initially rejected, but his decision was overruled by the Supreme Judicial Council) by saying that all other steps would have amounted to overstepping his constitutional powers, some academics and observers hoped until the last moment that he would refer the problematic procedure for the nomination of the next prosecutor general to the Constitutional Court. Others, however, said that the president would have unnecessarily protracted a process in which Mr Geshev's selection was a long foregone conclusion. The fact is that in spite of some dubious procedural moves, there was absolutely no attempt by the prosecutors' college in the Supreme Judicial Council, or among the rank and file prosecutors to nominate an alternative candidate, so even a restarted selection process would have produced similar results.

The future does not bode well

The formal appointment of Mr Geshev coincides with several other ominous developments for the Bulgarian judiciary. First, the news that the Cooperation and Verification Mechanism (CVM) used by the European Commission for over a decade to monitor progress in the reform of the Bulgarian justice system might be dropped. While the annual CVM reports served little purpose beyond naming and shaming some of the pertinent issues of the Bulgarian judiciary (and their optimistic political sections often served as fig leafs for the government), the timing of the announcement dealt a fresh blow to the hopes of Bulgaria's democratic and civic opposition for a true reform of the judiciary. The fact that Romania, which had until recently a proven track record of fighting anti-corruption, did not get their CVM reports suspended for now, angered many rule of law activists.

Secondly, on 19 November GERB nominated the outgoing prosecutor general, Sotir Tsatsarov, to take over the other key anti-corruption institution of the country, the Commission for Combating Corruption and Illegal Assets Forfeiture. The nomination came in spite of the fact that in Mr Tsatsarov's seven years at the helm of the prosecutor's office not a single high-profile anti-corruption investigation has led to a court sentence.. It is hard to imagine where the duo of Mr Tsatsarov and Mr Geshev would take the fight against corruption to in the next seven years. It is far more likely that they would wield the might of their two institutions to suppress dissent even further.

A glimmer of hope

To end on a positive note, there is a silver lining to this series of hammer blows to the rule of law in the country. The Venice Commission, the Council of Europe's constitutional law expert body monitoring rule of law developments across Europe, has been tasked with looking into changes to Bulgaria's Penal Code and Justice Law which would allow for independent investigation of the prosecutor general. The Bulgarian government has pledged to follow all recommendations, which was one of the preconditions for ending the CVM monitoring. Such a revamp might actually create a working oversight mechanism for monitoring potential misuse of authority by the top prosecutor. In Bulgaria, however, one should not be overly optimistic about such a scenario.

"I am not a systemic player - I am a boy from the periphery of the city. It is payback time for everyone who stole from the state."

No, this is not a one-liner from Sylvester Stallone's unforgiving mercenary character in the latest Expendables movie filmed at Boyana Studios. It is a direct quote of Ivan Geshev, the next prosecutor general, from his first TV appearance after he became the sole nominee for the post in July this year.