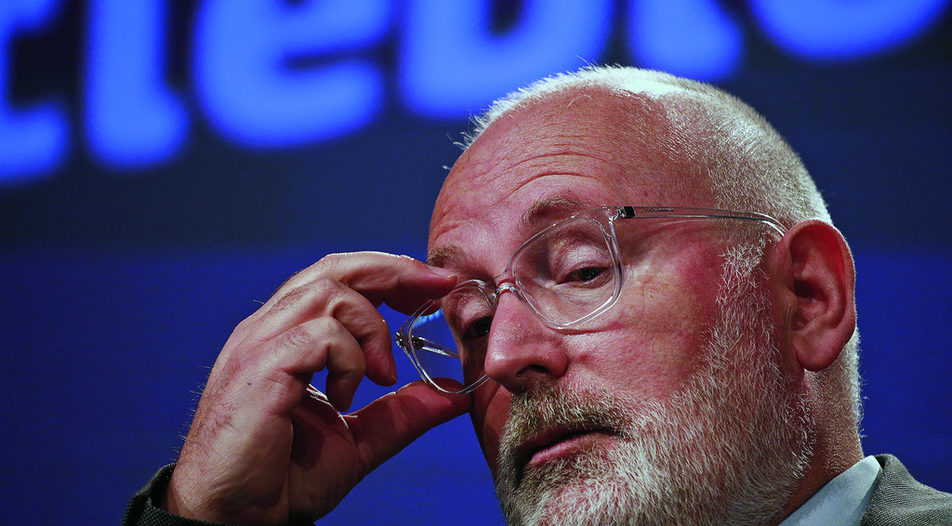 Although in comparison with Poland and Hungary, Bulgaria has caused less headaches to Frans Timmermans, the First Vice President of the European Commission responsible for the rule of law, he didn't celebrate Sofia's graduation from Brussels monitoring over its judiciary system

Although in comparison with Poland and Hungary, Bulgaria has caused less headaches to Frans Timmermans, the First Vice President of the European Commission responsible for the rule of law, he didn't celebrate Sofia's graduation from Brussels monitoring over its judiciary system

After 13 years of nursing reforms in Bulgaria's law enforcement and judicial sector, on October 24 the European Commission announced that Sofia no longer needs Brussels' bedside care. The EU's executive concluded that the country had made substantial progress on all the criteria laid down in the Cooperation and Verification Mechanism (CVM), a special instrument for monitoring their judicial reforms. Bulgaria and Romania were put under CVM's supervision when they joined the European Union in 2007 to allay concerns by some EU member states that both countries were not serious about fighting corruption.

This should have been a celebration - a basket case like Bulgaria, a country infested with corruption and organized crime, had mended its ways, proving yet again the EU's transformative role.

Instead, the European Commission announced its decision without fanfare. None of the commissioners responsible for the rule of law - First Vice-President Frans Timmermans, or justice commissioner Vera Jourova, took the floor to present the Commission's conclusions. More than that, even though the Commission has the power to end the CVM monitoring on its own, it decided to wait for the opinions of the member states and the European Parliament. This indicates once again its diffidence about its own assessment of Bulgaria's progress.

There are reasons for the European Commission's cautious approach. Back in 2007, the expectation was that within three years, with a little nudging from Brussels, both Romania and Bulgaria could build a politically independent judiciary that efficiently pursues corruption and organized crime. However, progress has been negligible.

In Romania's case, there was a six-year period when the special anti-corruption prosecutor's office (DNA), led by Laura Kovesi, now the new European chief prosecutor, achieved fast track convictions of many high-ranking Romanian officials and politicians. By the end of 2018, however, the Social Democrat government in Bucharest severely restricted the DNA's powers and later fired Ms Kovesi. This prompted the European Commission to conclude in October 2019 that Romania was not yet ready to graduate from the CVM.

Bulgaria could not boast such achievements in fighting corruption. Over the past 13 years, Sofia has introduced a string of new agencies and new specialized courts to tackle graft but success has been limited. Investigations against notorious businessmen are rare and frequently perceived as a smokescreen for politically motivated harassment of dissenters.

The anti-corruption zeal has targeted former fallen ministers from the ruling GERB party or media owners like Ivo Prokopiev whose publications Capital and Dnevnik (KQ is also part of Prokopiev's Economedia group) are vocal critics of the unaccountable judiciary and have been actively pursuing anti-corruption media investigations. Conspicuously, the special prosecutor's office and the anti-corruption commission (which can freeze and forfeit illegally acquired assets) have cleared of wrongdoing all politicians recently exposed in "apartment gate" - purchase of luxurious apartments below market price. Both anti-corruption watchdogs have also failed to notice the inexplicable enrichment of political brokers like the honorary chairman of the Movement for Rights and Freedoms party Ahmed Dogan or his lieutenant Delyan Peevski.

If anything summarises Bulgaria's anti-corruption charade, it is the story of Plamen Georgiev, until the recent chairman of the anti-corruption commission. Mr Georgiev rose to prominence in 2011 when as an anti-corruption prosecutor he muddled an investigation against Prime Minister Boyko Borissov. Mr Borissov was phone-tapped asking the chief of the customs administration to halt a tax evasion probe. The prime minister later admitted that his intervention had been a favour to the then-president Georgi Parvanov but no investigation or prosecution followed.

Very soon, Mr Georgiev became deputy-minister of justice in Mr. Borissov's cabinet and in 2013 he was appointed chairman of the newly created Commission for Anti-Corruption and Illegal Assets Forfeiture (CACIAF). Until very recently CACIAF didn't have any notable success, except for the freezing of the assets of Tsvetan Vassilev, owner of bankrupt Corporate Commercial Bank. However, the commission was rather active in pursuing a probe of Mr Prokopiev, owner of one of the very few independent media groups in Bulgaria. The CACIAF froze his personal assets, using as a pretext a case from 1999 in which three court instances had decided in favour of Mr Prokopiev.

In 2019, a media investigation revealed that Plamen Georgiev had bought an apartment below market price. While it is a common practice in Bulgaria to declare a lower purchase value in order to save on tax payments, it was not tax evasion that brought down the chairman of CACIAF. It emerged that Mr Georgiev had unlawfully built a barbeque and jacuzzi on the rooftop terrace of the apartment building which he claimed was not part of his property. It was this attempt to justify the lower price of his apartment that sparked public outrage and made Mr Georgiev a laughing stock.

Mr Georgiev denied wrongdoing but resigned and was appointed Bulgarian consul general in Valencia, Spain - a move that raised questions about his diplomatic competence. In order to fend off doubts, Mr Georgiev leaked to the press his Spanish language certificate, which turned out to contain 17 spelling and grammatical mistakes. Moreover, the company that conducted the Spanish language classes had been hired by CACIAF to teach its employees, even though it had no previous language educational activities, raising questions about the anti-corruption commission's public tender practices. This was yet another blow to Mr Georgiev's credibility, but he did not resign from his new diplomatic post.

Why did Brussels do it?

The European Commission's decision to lift the CVM monitoring is an attempt to transfer responsibility to the Bulgarian authorities. On one hand, the failure to trigger meaningful changes in Bulgaria was an indictment of bureaucracy in Brussels. On the other hand, the Commission realized that no reform could be imposed from abroad.

Hence over the past three years, the Commission's annual reports on progress under CVM shifted their focus to the transparency of judicial decisions. The logic behind this is to provide tools for Bulgarian society to follow closely the judicial process and anti-corruption investigations in order to hold politicians accountable. The Bulgarian government created a Coordination and Cooperation Council that will "be responsible for overseeing the continued progress of reforms" after the end of CVM. However, given the lily-livered (and highly selective) anti-corruption fight in Bulgaria over the past decade, this approach reeked more of abdication than empowerment.

At the same time, the European Commission has shown that just because it may have turned a blind eye to the imitation of reform that does not mean it is blind. The last CVM report does not say that judicial reform in Bulgaria has achieved its goals or that corruption has been reduced to acceptable levels. On the contrary, it clearly acknowledges that serial problems still exist.

For example, the report concludes that "the achievement of stable results with regard to final convictions in high-level corruption cases is still pending". It states that "citizens must be able to fully trust that such institutions [the Anti-Corruption Agency and the Prosecutor's Office] act impartially, in full respect of due process and fundamental rights, including the presumption of innocence".

Both statements say in a nutshell that not only has Bulgaria not achieved the desired results but also its law enforcement agencies are, to put it mildly, unreliable.

There is still uncertainty whether the CVM will be finally lifted. Ten EU member states do not agree with the European Commission's conclusions that Bulgaria has fulfilled the criteria laid down in the CVM. However, the European Parliament supports the termination of this mechanism, because it calls for faster introduction of EU-wide rule of law monitoring. This could give the European Commission enough arguments to lift the CVM.

The EU's executive body claims that Bulgaria and Romania will not be left "unsupervised", as a new mechanism - Rule of Law Review Cycle (RLRC) will start operating next year. The European Commission underlines that RLRC will cover a wider range of issues compared to the CVM and therefore will be more effective. For example, the media situation will be addressed.

However, the future mechanism will not focus solely on Bulgaria and Romania but will deal with all member states. Sofia and Bucharest will get less attention, hence both governments enthusiastically support the planned changeover. More importantly, "the review will be limited to issues of direct relevance to the rule of law in the EU", the European Commission wrote to the European Parliament, i.e. it will not examine in detail the member states' justice systems as long as they do not lead to problems at the Community level.

In addition, the European Commission promises to tie the disbursement of EU funds to the rule of law, but the proposed regulation will not be a magic wand. Brussels has the power to suspend funding even now, but this is rarely done and there is no indication that anything will change. At the same time, the new powers of the Commission (if they pass) are a bigger threat to Poland and Hungary who are openly disregarding basic principles of the rule of law, while Bulgarian authorities undermine the independence of the judiciary by following guerrilla tactics, not breaking openly the established rules.

A stronger spur for change could be expected to come from the new European Prosecutor General who will have the right to independently investigate cases of fraud affecting the EU's financial interests and take suspects to Bulgarian courts. The newly appointed prosecutor Laura Kovesi has a lot of experience in bringing corrupt officials to justice and there is no reason why her zeal on Romania will not continue on an EU-wide level. The Bulgarian government is definitely concerned, joining several other member states in trying to block Ms Kovesi's appointment several months ago. Now the hope is that this concern was justified and the new European Prosecutor General will deliver.

After 13 years of nursing reforms in Bulgaria's law enforcement and judicial sector, on October 24 the European Commission announced that Sofia no longer needs Brussels' bedside care. The EU's executive concluded that the country had made substantial progress on all the criteria laid down in the Cooperation and Verification Mechanism (CVM), a special instrument for monitoring their judicial reforms. Bulgaria and Romania were put under CVM's supervision when they joined the European Union in 2007 to allay concerns by some EU member states that both countries were not serious about fighting corruption.