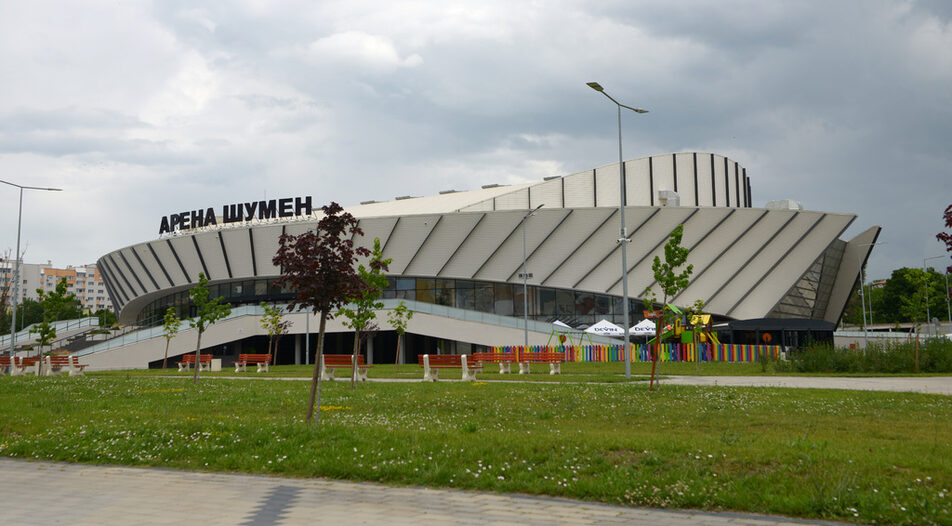 The Black Wednesday: A 13 Million Sports Hall With The Revenue Of A Corner-Store

The Black Wednesday: A 13 Million Sports Hall With The Revenue Of A Corner-Store

The story of one of many government-built arenas designed not to support sport, but to boost friendly infrastructure companies

This is the third instalment of the collaboration between Kapital Insights and Friedrich Naumann Foundation for the Freedom (FNF), which we dubbed "Black Wednesdays". We publish the next story from the Black Book on Government Waste - a flagship project by FNF and independent journalists aimed at exposing problematic, wasteful and potentially corrupt practices perpetrated by national and local authorities across Bulgaria. In its six editions since 2015, the authors of the Black Book have tracked dozens of examples of how public money is mismanaged.

In this piece, you can read about "Arena Shumen" - the supposed "jewel" in the crown of the local government in the Northeastern city. It has cost the state and the municipality nearly 6,5 million euro, with just over 4 million allocated from the state budget and another 2 million coming from the municipality. The contractor chosen to complete the project was infrastructure mastodon GP Group, a "state champion" during the years of GERB rule. In the first six months since it opened, the new multifunctional sports hall managed to raise less than 15,000 euro in revenue and, in fact, held virtually no sporting events.

The most recent in the series of Bulgaria's multifunctional sports halls - Arena Shumen, which opened in July 2018 - serves as a blatant example of inefficiency. The hall makes as much revenue as a small grocery store, as municipality data showed after it was forced to reveal the facts by the opposition in the Municipal Council.

The arena, which has become the pride of the local government, and has been defined as the "jewel of the city", cost the state and the municipality nearly 6,5 million euro. About 4 million euro were allocated from the state budget for the construction of the multifunctional hall, and the Municipality of Shumen paid another 2 million "for the improvement of the region". The contractor of the project was GP Group. In the summer of 2018, the multimillion-dollar arena was personally unveiled by Prime Minister Boyko Borissov, and Shumen Mayor Lyubomir Hristov (GERB) announced that the new hall would become a sports center and an attractive venue for the entire city. Once the fanfare subsided, the reality turned out to be very different.

The report of the Municipality of Shumen shows that six months after its spectacular opening, Arena Shumen accumulated less than 15,000 euro in revenue. It is not clear if it has made any profit at all. The modest income of about 2,500 euro per month places the multi-million hall on par with a corner store. At this rate, the arena will pay off its initial investment in about 150 years, as local wisecrackers have calculated.

Fact is, the municipality blundered by introducing prohibitively high fees for the use of the hall. It did this with the justification that the costs of its maintenance have to be covered from somewhere. At the suggestion of the municipal enterprise Municipal Housing and Real Estate, which was entrusted with the management of Arena Shumen, the councillors from the majority GERB group voted for rent prices to range from 240 to 1,800 euro per day. But even the lowest price of 240 euro per day is unrealistically high for Shumen's sports clubs which never use the hall. The only exception is the handball club, which receives the largest subsidy from the municipality. Opposition councillors' demand for preferential prices for local sports clubs, especially for children's groups, was in vain.

Sports hall or a buffet?

A total of 51 events have been invoiced in half a year. However, a more in-depth reading of the report shows that the use of the buffet service, for which 17 invoices were issued, was also reported as an activity. Thus, in practice, it turns out that the most profitable activity of Arena Shumen is the work of its buffet! It accounts for one third of the "events" that took place in the hall. The public events - sports, cultural or corporate, number only about 5-6 per month and the biggest client of the hall is the Municipality itself.

The mayor's office paid a total of 2,400 euro to its own municipal enterprise Municipal Dwellings and Properties for 8 events that took place in the hall, mainly concerts of local bands. The University of Shumen paid almost as much for the graduation ceremony of its students in December.

Otherwise, the most expensive events in the hall are the performances of famous actors Kamen Donev and Dimitar Rachkov, which filled the arena to the brim and paid the highest rental price - 1,800 euro per day.

"The hall is not used effectively at all; most of the time it is locked and people have started wondering why it was built in the first place," Veselin Penchev, a BSP municipal councillor and leader of the Shumen Socialists says. "It was clear that the hall would not be able to work at full capacity from the start, but it is indisputable that it is simply not being put to sufficient use," he adds.

The hall is most expensive when it is empty

"I dare not ask about the costs so that they do not start complaining that it works at a loss and use this as an occasion to sublet it on concession," the municipal councillor explains. He insists that the hall ought to be given at preferential prices to the local Shumen teams and points out that in other places similar sports halls are given to the clubs 10 times cheaper.

"It is very likely that the mayor's team wants to give out the arena to be managed by a private company," said municipal Dobromir Draev, chairman of the right-wing For Shumen group, adding that the hall is already a serious financial burden for the municipality. "The economic logic is that the most expensive place is the empty place. The same goes for the hall. A hall for millions cannot be empty because the municipality wanted to turn it into a working business," the municipal councillor adds, saying that the local government has never decided whether the purpose of the hall would be to perform economic or social functions.

"However, the current state of affairs is not normal at all," Draev said: "Asking sports clubs to pay 200 euro per day cannot happen. There must be a symbolic rent so that the hall can be used by more people. Now the hall is empty so that nobody can scratch the floor. This is not serious! Why invest millions of public money in something that will not benefit people?" He concludes that people currently feel that the only purpose of constructing the new hall was the absorption of money for its construction.

The city mayor Lyubomir Hristov describes the criticism of the hall's management as a "malicious attack by the opposition". "The hall is a good thing for Shumen and works well; sports and cultural events are always taking place there," he told councillors, despite the indisputable facts about the insignificant income of the arena.

Otherwise, citizens of Shumen, although enjoying the revamped landscape around the hall, often ask whether it was necessary to spend nearly 6,5 million euro for something that is really just a "beautiful monument".

"Yes, we have a hall that looks very good, with beautiful gardens, but that's it. There are no events, and the people of Shumen were enthusiastic about the arena because they thought it would be open for the whole city," says Dobromir Draev who is calling for a public debate about the arena's future.

If a serious concept for the development of the hall in which its public functions are explicitly listed is not adopted, Arena Shumen might be given on concession to a private company very soon. This could prove a viable solution, but only if a fair and transparent procedure with clear conditions for management and development of the hall takes place. Common Bulgarian practice shows that this is rather unlikely to happen.

What happened after the publication?

After the publication, which caused a great public furor, the local authorities tried to polish the image of Arena Shumen and organized a number of events in it for the first month or two. However, most of them had nothing to do with sports - e.g. kindergarten festivals, a recruitment campaign, student graduation ceremonies, all events that could have easily been held elsewhere. Moreover, many of these events were paid for by the municipality, which created artificial demand for the services of the arena. But over the next month or two, even this artificial demand faded out. In recent days, the biggest event in it was the pre-election meeting of Prime Minister Boyko Borissov attended by activists of the ruling GERB party from Northeastern Bulgaria.

Meanwhile, the city experiences an extreme shortage of sports facilities. During the election campaign for mayors and councillors, sports clubs used meetings with politicians from various parties to raise the issue and seek their assistance to find a resolution. Athletes complain that, due to the high price of the rent, they cannot use Arena Shumen and almost all teams are forced to train and compete in the city's two old sports halls, which are packed full from 7:30 to 22:00.

The clubs want to use the Arena Shumen hall, which now opens its doors for one or two concerts a month and for some more elite sport events, at preferential terms. Local politicians from all sides also want the same. Otherwise, Arena Shumen will continue to be just a beautiful monument that cost 6,5 million euro. Construction experts estimate that these funds would have enabled major repairs to the old halls and the construction of at least 3-4 playgrounds for mass sports in the neighbourhoods of Shumen.

This is the third instalment of the collaboration between Kapital Insights and Friedrich Naumann Foundation for the Freedom (FNF), which we dubbed "Black Wednesdays". We publish the next story from the Black Book on Government Waste - a flagship project by FNF and independent journalists aimed at exposing problematic, wasteful and potentially corrupt practices perpetrated by national and local authorities across Bulgaria. In its six editions since 2015, the authors of the Black Book have tracked dozens of examples of how public money is mismanaged.

In this piece, you can read about "Arena Shumen" - the supposed "jewel" in the crown of the local government in the Northeastern city. It has cost the state and the municipality nearly 6,5 million euro, with just over 4 million allocated from the state budget and another 2 million coming from the municipality. The contractor chosen to complete the project was infrastructure mastodon GP Group, a "state champion" during the years of GERB rule. In the first six months since it opened, the new multifunctional sports hall managed to raise less than 15,000 euro in revenue and, in fact, held virtually no sporting events.