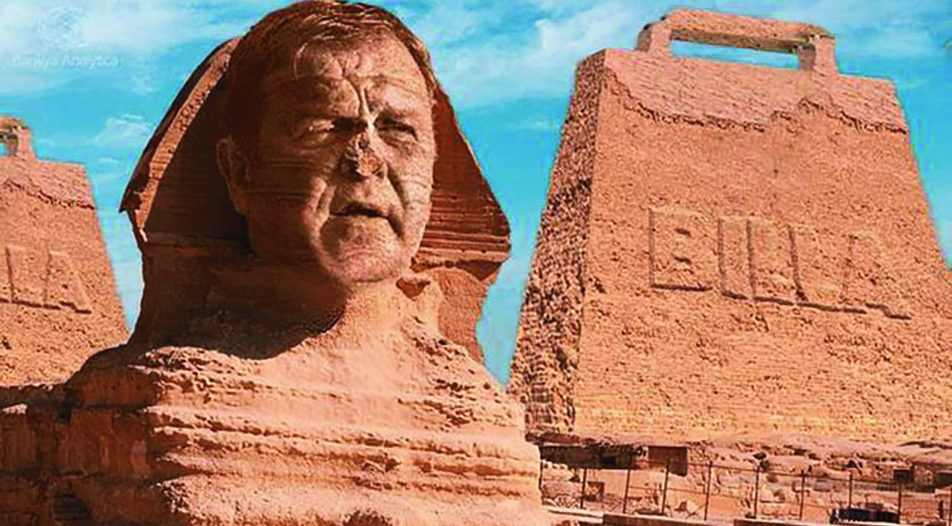 The nickname of Emil Dimitrov, a political chameleon and jack-of-all-trades, gets a funny revamp

Bulgaria has a new environment minister after Neno Dimov penned his resignation from his cell, so becoming the much-needed scapegoat for the multilayered incompetence that has left the town of Pernik waterless. The new incumbent is Emil Dimitrov, better known by his nickname Revizoro - a tongue-in-cheek pun combining "reviziа" (Bulgarian for "financial inspection") with "Zorro", the fictional masked vigilante celebrated in the 1998 movie that starred Antonio Banderas.

Curiously, the original spin on Mr Dimitrov's nickname is actually positive - he earned it after winning the title of the financial inspector (or "revizor" in Bulgarian) of the year in 1997 for discovering numerous irregularities in-state companies and forcing them to return the equivalent of 283 million levs in today's money to the state coffers. When his political career began, however, he proved to be a chameleon. His most notable appearance was his short stint at the helm of the customs office between the end of 2001 and start of 2002, memorable only for the chaos that he caused. "The director of the Customs Agency is rushing around all over the country wherever he appears, he fires, he hires, he seizes contraband goods, or does not find any but certainly creates mayhem," Capital Weekly wrote at the time.

In recent times he became a notable lobbyist for the interests of large businesses in parliament, including Bulgartabac (owned by media mogul Delyan Peevski), Russia's oil major Lukoil, alcohol and tobacco producer Vinprom Peshtera and the maritime business of Kiril Domuschiev, the new owner of NovaTV. Mr Dimitrov has also been quite active in judicial matters, notably nominating the previous Prosecutor-General Sotir Tsatsarov for his new position as chief of the anti-corruption agency.

With a diverse career like this, there is little wonder that Mr Dimitrov has been chosen to head the environment ministry at a time of crisis. He explained his appointment by saying that "there was no one else" and "this government needs to complete its mandate," which appears to be more than enough in the current toxic Bulgarian political environment. On the bright side, Dimitrov's nickname, Revizoro, bestowed on him on the internet, seems oddly befitting given the water crisis in Pernik confronting him- Yazoviro, a pun built on "yazovir" (water reservoir in Bulgarian).

If you have any Bulgarian friends added on social media, chances are that you have seen the image of Defense Minister Krassimir Karakachanov in a desert yellow-coloured uniform, supposedly holding a plastic Billa supermarket bag ("torbichka" in Bulgarian) photoshopped on various backgrounds.

The gag depicting the defence minister carrying a shopping bag, supposed to mock his perceived parochial appearance, had been running since Mr Karakachanov visited Washington, DC last year. But the real explosion came in mid-January when he and Prime Minister Boyko Borissov published a photo of their meeting with an Egyptian government minister. It showed the Bulgarian defence minister dressed in the said uniform which - how shall we put it? - fitted his corpulent body all too well.

And the internet exploded: in a matter of minutes the first collage was posted, with a Billa bag placed next to him, sardonically amplifying the inappropriateness of the selected piece of clothing. A tsunami of funny versions of Mr Karakachanov's image, often alongside an added Billa bag, then ensued. He appeared in a still from Star Wars, substituting Jabba the Hutt; on the bow of the sinking Titanic; sitting on the bench next to Forrest Gump from the eponymous movie Indeed the memes with him became so viral that people started collecting them in "Best of" albums on Facebook.

In an attempt to appease the jokers, Mr Karakachanov asked them politely on TV to stop making "montages" of him with the Billa bag. Yet this only added fuel to the fire. Dozens of new collages appeared, this time depicting him minus the now legendary bag. And while some may consider the jokes fat-shaming, it is hard to sympathize with a cabinet minister and party leader who freely uses hate speech against various minorities and opponents.

A more serious consequence of the gag was that Valdes Radev - one of the key meme creators on this and other topics - was fired from NovaTV, where he had worked for 20 years, a few short weeks after his meme was circulated on social media. In Bulgaria's media environment, no joke goes unpunished.

There is a peculiar distinction in Bulgarian between two types of freedom. "Svoboda" which stands for "liberty", and "slobodiya" which can be translated as a profligate, unfettered type of freedom that results in anarchy. And while traditionally the latter term was used to describe the need for rules that would prevent arbitrariness, recently Bulgarian politicians started abusing it. The result was a further erosion of public trust in the media and more disparagement of its slow and silent capture by the oligarchy.

"There is no freedom of expression in the Bulgarian National Radio; there is full-blown "slobodiya", said Yordan Tsonev, an MP from the Movement for Rights and Freedoms. Without batting an eye, the politician turned a discussion about the political incursion into the public radio that almost saw a leading justice system reporter, Sylvia Velikova, dismissed, into a harangue in which he accused journalists of having too much freedom of speech.

And Mr Tsonev was not the first one to do so. His colleague from GERB, Vezhdi Rashidov, who heads the media committee in the National Assembly, has frequently argued that media freedom has gone overboard and he is also threatening the freedom of expression of everybody else.

Lastly, Prime Minister Boyko Borissov apparently agrees. "There is no other place in Europe with such great freedom of speech as Bulgaria," he famously said back in 2015, adding that Bulgarian media benefits from "slobodiya" more than any other media in the EU. He had also clearly delineated what constitutes freedom of speech: "I watch the TV and wonder: on the most viewed national programs a man comes out and speaks out against me, and the government and ends up complaining about freedom of speech. If there was a problem with freedom of speech, you wouldn't be saying whatever you want on TV."

The fact that journalists who are critical of the government leave the TV stations once they have been captured by oligarchic interests, or that most of the country's press is controlled by one man does not seem to bother the prime minister. Alas, he might not fully grasp the distinction between "svoboda" and "slobodiya".