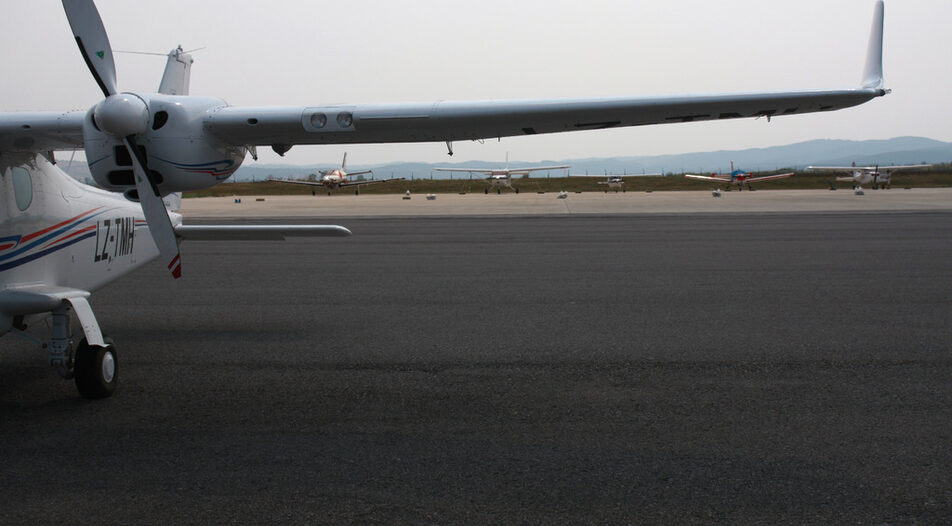 None of the members of the crew of the rogue plane or its potential passengers have been named, located or arrested, and an "investigation is still ongoing" about the possible cargo, and even the plane’s own history.

None of the members of the crew of the rogue plane or its potential passengers have been named, located or arrested, and an "investigation is still ongoing" about the possible cargo, and even the plane’s own history.

Last Wednesday, another unidentified small aircraft managed to almost replicate this mission. It took off from Lithuania without a flight plan or identification transponders on, flew over seven countries on NATO's Eastern flank, made an unauthorized landing in Hungary to fuel up, and then landed twice in Bulgaria. And while the aircraft was escorted by fighter jets on four separate occasions in the skies of the other countries, it landed without any obstruction from the police or special services. The crew and the potential passengers on the plane were not identified, or apprehended, and succeeded in escaping, and abandoning, the aircraft.

The incident appears worthy of a Hollywood blockbuster, and, a week later, it still poses many more questions than answers. None of the members of the crew or its potential passengers have been named, located or arrested, and an "investigation is still ongoing" about the possible cargo, and even the plane's own history.

Unlike the story of Mathias Rust and his flight into the USSR, in this case the NATO air defenses responded rather well. After flying over Poland and Slovakia, landing without authorization at an airfield near the Hungarian town of Debertsen and escaping from there, the small aircraft, later identified as a Piper PA-23 Aztec, was intercepted by two Hungarian Gripen fighters. They escorted it to the Romanian border, but did not resort to use of force as the aircraft did not take any threatening action and simply refused to establish radio contact.

From there, it was intercepted by two U.S. F-16s conducting a joint air policing mission over Romania. Two Romanian fighter jets subsequently took over the escort and followed it into Serbian airspace. The aircraft remained there briefly, returned again over Romania, then made a surprise landing at an unused airfield near the Bulgarian town of Vidin.

Why was the crew not apprehended?

This is where the gaps in Bulgaria's national security system and its ability to react quickly to unforeseen situations became all too stark. So far, there is public confirmation that the Bulgarian Air Force had information about the incident with the unidentified Lithuanian plane and was ready to scramble fighter jets, as NATO air policing is centrally managed from a command center in Torrejon, Spain. However, it is not clear to what extent there was effective coordination between the army and the Ministry of the Interior, as well as readiness to meet and intercept the crew of the phantom machine after landing. According to unofficial information, the aircraft landed at an old airfield near the village of Inovo, only 4 km away from Vidin. It is alleged that there the crew refueled from canisters they carried on the plane and spent at least an hour in the area before taking off again.

This hour turned out to be insufficient for the police teams from Vidin or special forces to arrive in time and arrest the intruders. The latter is proof of the deplorable (and that's an understatement) coordination of the national security system. In practice, for years, every regional directorate of the Ministry of Interior in the country has maintained its own heavily armed infiltration and detention team, similar to the U.S. SWAT that can, in theory, be used in a potential anti-terrorist operation.

What is more, the national Special Forces (the Specialized Counter-Terrorist Unint, SOBT, part of the Interior Ministry, or the Special Operations Forces (SOF) of the Bulgarian army, which have the right to be used in potential sabotage or terrorist situations) ought to have been scrambled as soon as the information about the crisis situation had been received from the intel exchange by NATO armies. Logic says that they could have been alerted in advance and used helicopters to immediately transport them to the possible landing area. To date, however, there is no evidence that anything of the kind was done.

Where were the Special Forces?

In theory, there is nothing preventing the rapid airlift of the commandos - the army has Cougar transport helicopters and the Interior Ministry has helicopters assigned to the border police. However, the latter are used to patrol the Turkish border for illegal crossings.In theory, this ought not be a problem because the Interior Ministry and the Ministry of Defence should cooperate with each other in the event of potential sabotage or terrorist incidents and have clearly defined procedures for coordination in such cases. In practice, these protocols for joint action are probably rotting in a dusty folder that no one has opened for years.

And while the landing of the aircraft near Vidin could be explained by the effect of surprise, nothing justifies the subsequent failure to follow the intruder plane to its second landing spot, an unused airport between Shumen and Targovishte in the North East, and apprehend its crew there. Instead, the crew, the passengers and any cargo the plane may have carried vanished in thin air, despite the local police allegedly finding the machine with the engine "still warm".

If any foreign hostile intelligence service needed concrete proof of how it could fly into Bulgaria with impunity, smuggling small cargo - or even sending a reconnaissance and sabotage team - without the Bulgarian Security Services being able to counter it effectively well, it now has it. This discredits the Bulgarian security authorities and shows that the country is, indeed, the weak link in NATO's Eastern flank at a time when war is raging just a few hundred kilometers away.

Also, every bit as disconcerting is the reaction of the Bulgarian Ministry of Defense in the context of air policing. According to Defense Minister Dragomir Zakov, the MiG-29 fighter pair on duty was eventually scrambled to identify the phantom aircraft. However, in his words, the jets do not appear to have escorted the rogue aircraft to its landing zone due to the severe storm over Bulgaria at the time. This is somewhat justified, as according to Mr Zakov, the pilot who was scrambled took a considerable risk with his life by flying the fighter in extremely severe weather conditions. It is not entirely clear, however, why the minister spoke in the singular about "the pilot" when the standard procedure for air policing is to always have a pair of jets in the air.

It is also questionable as to what extent the army has been able to track the aircraft along its route, as the problems of radar coverage over the country due to outdated location equipment have been well documented for years. If there's an upside to this, however, it's that this could expedite the purchase of new NATO 3D radars, which could be achieved even with the current revision of the state budget by relocating funds for the modernization of the army.

Last Wednesday, another unidentified small aircraft managed to almost replicate this mission. It took off from Lithuania without a flight plan or identification transponders on, flew over seven countries on NATO's Eastern flank, made an unauthorized landing in Hungary to fuel up, and then landed twice in Bulgaria. And while the aircraft was escorted by fighter jets on four separate occasions in the skies of the other countries, it landed without any obstruction from the police or special services. The crew and the potential passengers on the plane were not identified, or apprehended, and succeeded in escaping, and abandoning, the aircraft.