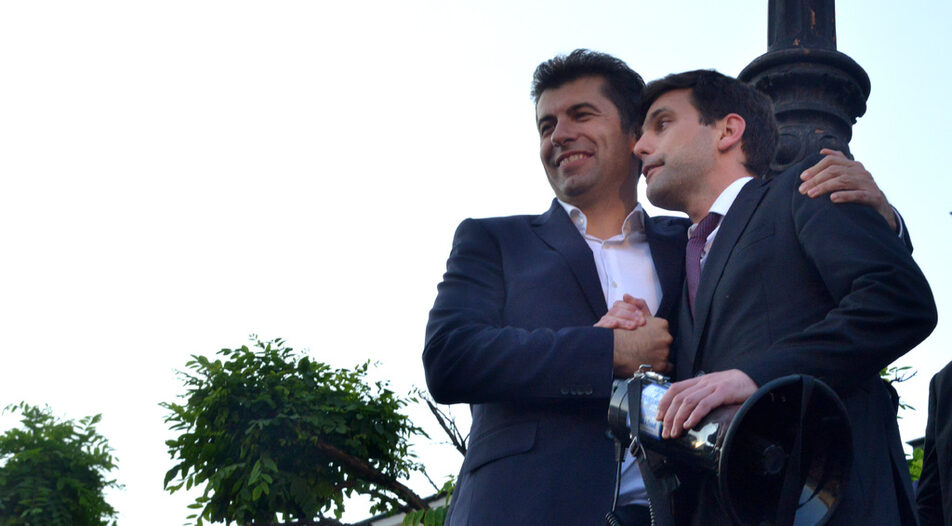 The week: A new coalition was born, the billions for the road cartel were halted, what the hell has gone wrong with the Bulgarian army

The week: A new coalition was born, the billions for the road cartel were halted, what the hell has gone wrong with the Bulgarian army

"We will bring you down", we have 2.5 billion reasons to do so + an MP not afraid of going back to her village

It's been a momentous 8 days. Even for hardened devotees of the muddy rivers of Bulgarian political life, the pace of events in the past week has been breathtaking (and from a journalistic point of view, rather tiring).

It took There is such a people's party precisely that long to leave the ruling coalition on the direct order of its founder Slavi Trifonov, have its parliamentary group split into two, launch a campaign against the Speaker of the National Assembly and, by Thursday, successfully oust him alongside GERB and MRF - two parties that were its supposed sworn enemies for the past two years.

This means that Bulgaria now effectively has a new four-party coalition consisting of what's left of TISP, GERB, MRF and the radicals from Vazrazhdane party. With their 126 MPs, they voted out Parliament head Nikola Minchev (WCC).

The main purpose of the vote, of course, has little to do with Mr Minchev, who was in fact almost universally praised by deputies from most factions during heated debates on Thursday. MRF deputy chairman Yordan Tsonev summarized the real intention behind the vote in a short, clear sentence: "We are not here to prop up your incompetent and corrupt government, but to bring it down. And we will bring it down."

The new majority has the capacity to do that as soon as this weekend. GERB filed a motion of no-confidence against the PM Kiril Petkov and his cabinet on Tuesday, blaming the government for "destructive" fiscal and economic policies. And if you wonder why would that happen on a weekend since the law says up to 7 days, rumors have it that some parties are rather worried whether they can keep all of their members on board for the vote.

Of course, the prospect of a government collapse and yet another election cycle in the midst of an inflation spiral and a war nearby is not especially heartening. We are in for yet more rough days ahead.

Yet there are two silver linings to keep in mind through all this.

First, GERB is not back, yet. It's one step closer to getting revenge, but there is a sea of difference between bringing a government down and electing another. TISP might pretend to be gravely insulted by their ex-partners to justify voting against them, but to vote for a GERB-backed government is a whole new ball game.

And second, TISP's brutal volte-face will not only dent their image but more importantly - will reveal their inner core to parts of the Bulgarian public. Say what they will, politics these days is not exactly Game of Thrones and such moves have consequences. The power-brokers who pulled the levers for this theater could well end up getting more exposure - just the thing they hate.

This newlsetter was helped by: Ognyan Georgiev

N. Macedonia veto: how to lose friends and alienate people

The political crisis in Bulgaria, seemingly provoked by the Macedonian question, has had a detrimental effect far beyond domestic politics. It practically put a spoke in the wheel of the EU's Western Balkan integration policy. And fewer and fewer leaders are trying to be diplomatic about it.

For example, on Wednesday, Albanian Prime Minister Edi Rama told Politico he doesn't expect an EU summit next week to clear the way for his country to begin membership talks, pointing a finger to Bulgaria. "I don't have any expectations. I think nothing will happen. Albania and North Macedonia will not formally open talks to have accession," he told the Brussels-based media.

And with Prime Minister Petkov announcing his cabinet will transfer the prerogative over any decision for lifting the veto to the National Assembly, he practically washed his hands of a primary foreign policy matter. Not a good omen for Skopje, nor for Sofia, for that matter.

Turns out, Alexis Tsipras in Greece had quite some balls back in 2018.

The sorry state of the Bulgarian army

This week, the annual Report on the State of Defense and Armed Forces of the Republic of Bulgaria for 2021 was submitted to Parliament - and it's distinctly underwhelming. The audit highlights the army's serious problems.

They can be summarized as follows:

From the week: Is there a pilot on the Lithuanian runaway plane? A new plan for the Bulgarian Energy sector: batteries and renewable energy are in, gas is out

The road to corruption

It has been public for quite some time: roads in Bulgaria have been constructed in the worst possible manner - without oversight, competition and a plan. Now it's official. A special committee between two ministries dug for 2 months in documents, to classify and analyze the last big procurement orders of the Borissov government. That is - the last big government orders per se, as there have been none since.

Is the inflation rate

Is the growth in real estate prices for 2021, and 13% for the first quarter of this year, says Postbank. While the overall amount of mortgages is rising, due to the prices, the number of mortgages is stagnating, claims the lender.

From the week: Four risks for the Bulgarian economy after the collapse of the ruling coalition

The big Plovdiv-based producer of metals is seeing 17% growth in revenue for 2021, yet it lands in net loss, due to inflation in raw materials and currency expenses.

The Bulgarian bio-producer has 30% growth in revenue and almost 7 million of profit for 2021. It is building a new factory in Sofia, and wants to build another one later this year.

Bulgarian-based cryptoasset company wants to buy off its competitor Celsius. Celsius stopped all withdrawals this week, due to heavy volatility in the crypto market. Nexo's own token saw a 25% fall in one day, though it recovered a little bit later.

Radostin Vassilev - the leader of the TISP defectors and outgoing Sports Minister changed sides, leaving Slavi Trifonov's party with five MPs. While he was hailed as "brave" by Prime Minister Petkov, just a few months ago Mr Vassilev was among Mr Trifonov's most loyal acolytes and a vocal critic of Mr Petkov during the "Canadian passport" debacle.

INSA- the local company, owned by politically-connected Georgi Samuilov, has a new American partner - Focal Point Energy. Or at least that is what INSA claims, while the new US-registered company has no previous experience, or significant capital, to justify a new joint venture, which will work in renewable energy. Remains to be seen.
Words of the week: Ще си ида на село (I will go back to my village)

The political crisis also has its funny side - on Tuesday, just after five TISP MPs announced they would defect from the party, the faction's parliamentary leader Toshko Yordanov tried to "expose" an attempt by Radostin Vassilev to coerce another TISP MP, Hristinka Ivanova, to leave the party. While Mr Yordanov's claims about pressure were not entirely unfounded, the whole scene turned tragicomic when he played a recording of Mr Vassilev and Ms Ivanova talking on the phone. In it, the female MP humbly told Mr Vassilev that "she can as easily go back to [her] village," as she doesn't have grand political ambitions. Then, asked by her interlocutor if she is afraid of retaliation by Mr Trifonov's men, she responded - just as simply-mindedly: "Who would threaten me, when they don't even know my name?" While the scene caused many giggles (and memes online), it also exposed how some MPs perfectly understand - and accept - their voicelessness within party structures.

It's been a momentous 8 days. Even for hardened devotees of the muddy rivers of Bulgarian political life, the pace of events in the past week has been breathtaking (and from a journalistic point of view, rather tiring).

It took There is such a people's party precisely that long to leave the ruling coalition on the direct order of its founder Slavi Trifonov, have its parliamentary group split into two, launch a campaign against the Speaker of the National Assembly and, by Thursday, successfully oust him alongside GERB and MRF - two parties that were its supposed sworn enemies for the past two years.