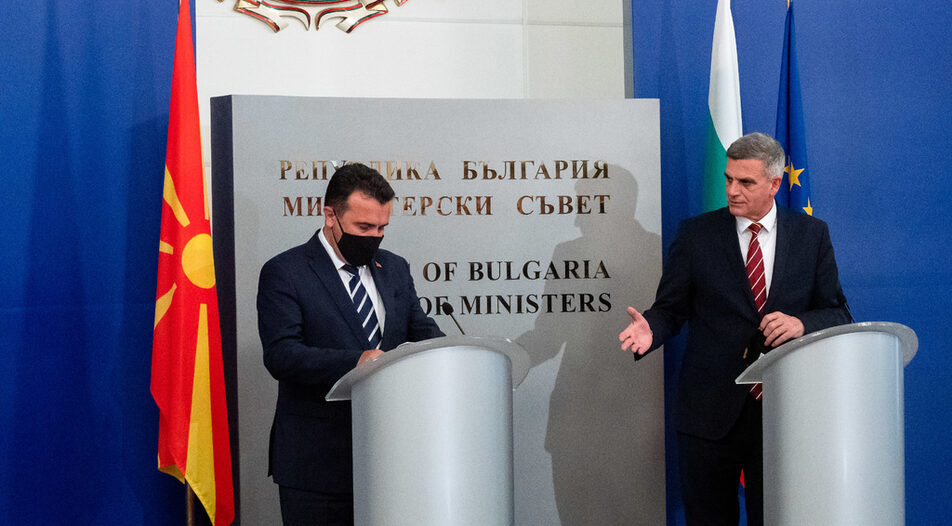 The Change (does not) Continue for Sofia-Skopje relations

Bulgaria-N. Macedonian relations might not open a new chapter as quickly as Skopje - and its Euroatlantic partners - might want

The Change (does not) Continue for Sofia-Skopje relations

Bulgaria-N. Macedonian relations might not open a new chapter as quickly as Skopje - and its Euroatlantic partners - might want

For over two years, Bulgaria's troubled relationship with North Macedonia has remained an unresolved item in its in-tray. Sofia has not budged from its refusal to even countenance the prospect of Skopje (and, by association - Tirana) entering into EU accession talks. Bulgaria's long-standing objection to N. Macedonia's interpretation of history and its treatment of people who self-identify as Bulgarians has certainly obstructed Skopje's European future. But it has also subjected Sofia to censure from the EU, and, since November - from the US congress.

The advent of a new, reformist government might have given hope to Macedonians and international backers of Skopje's Euroatlantic integration bid that Bulgaria would finally take a more constructive stance. To judge from the cabinet negotiations and public statements coming from the four parties, such hopes were premature.

Yet in his first interview for a foreign media after his election for a Prime Minister, Kiril Petkov announced to FT that Bulgaria will present Skopje with a tight negotiation schedule: 6 months in which the outstanding questions to be resolved. That will be a very hard task indeed.

What do Sofia's partners expect from Bulgaria?

Bulgaria's Euroatlantic partners insist that Sofia finds a solution to the dispute with N. Macedonia by the end of the year and stops blocking its neighbor's European integration.This, however, is difficult to achieve without compromises from Skopje - which are unlikely to come soon.

Unfortunately for Skopje, expecting concessions from the parties currently negotiating for a government, especially by the end of 2021, is just as unrealistic. BSP and TISP remain firmly against any softening of the Bulgarian position. Meanwhile, President Rumen Radev is actively dictating terms of his own that are more exacting than Bulgaria's previous haphazard demands but no less demanding. In this situation, Kiril Petkov and Assen Vassilev of We Continue the Change (WCC) have limited room for maneuver, even if they want the negotiations to take a more pragmatic and economic turn.

The veto imposed by Bulgaria last year remains the final obstacle before scheduling an intergovernmental conference that will kick off EU membership negotiations not only with Skopje, but also with neighboring Albania. Thus, in the eyes of the EU and the US, Sofia is deliberately delaying the integration of the Western Balkans into the European Union, and through it - the very stabilization of the notoriously turbulent region.

"The continued delay of North Macedonia and Albania's progress toward European Union membership has cast doubt on the commitments made by Western leaders, opening a door for anti-Western political influences throughout the region, particularly those from China and Russia. We believe eventual EU membership for North Macedonia and Albania is critical for long-term peace and stability within the Balkan region and for the whole of the transatlantic community," wrote US Congress representatives Claudia Tenney and William Keating, both members of the House Foreign Affairs Committee, in a letter to the Bulgarian Ambassador to Washington on 19 November.

What is Bulgaria's stance?

At an October meeting organized by the Slovenian EU presidency in Brdo and attended by N. Macedonian Prime Minister Zoran Zaev, the President of the European Commission Ursula von der Leyen, and the President of the European Council Charles Michel, President Radev linked progress in negotiations to the rights of Bulgarians living in N. Macedonia. He demanded that Skopje publishes the number of people who registered as Bulgarians in the September census in the country, while also granting equality for those who self-identify as Bulgarians by including the Macedonian Bulgarians in the country's constitution, from which they are currently absent, as "a constituent part of the nation".

Mr Radev pointed out that 120 000 Macedonians hold Bulgarian passports and that he expects this to be reflected in the census results. "They must acknowledge the past - that there have always been Bulgarians living in the country and there should be no denial of that. They should be granted equal status to the other minorities in N. Macedonia by being included in the constitution and by the admission of Skopje that they number tens of thousands of people, not five or ten," diplomat and former defense minister Boyko Noev told Capital weekly. He claims that Mr Radev's strategy has a chance of success and could ensure that the Bulgarian national interest is fulfilled despite previous mishaps.

Advertising
The advent of a new, reformist government might have given hope to Macedonians and international backers of Skopje's Euroatlantic integration bid that Bulgaria would finally take a more constructive stance

Although 120,000 Macedonians have Bulgarian citizenship, which Mr Radev considers an expression of their Bulgarian self-identification, it is likely that a significant portion of them acquired the papers to access the EU labor market during a period when the Bulgarian passport was issued without much trouble. At the same time, the number of Bulgarians who voted in the 21 November run-off elections in N. Macedonia was only 328, so it is not at all clear how many really self-identify as Bulgarians. Also, the political cost of recognizing a Bulgarian ethnicity in N. Macedonia would be huge for those who decide to do it. Hardly any of the people currently in power in Skopje are prepared to accept such a move. Changing the Macedonian constitution also requires a large two-thirds majority, which also seems impossible at the moment.

The clock is ticking

The last EU Council Summit for the year will take place on 14 December and the European Commission has been pushing for a resolution of the dispute by then. It is likely that all European leaders will be pressurizing Bulgaria on this date.

"There has not been a foreign leader who has spoken to a Bulgarian politician in a responsible position and not raised the issue of Macedonia. We cannot have any other foreign policy at the moment," a Capital source familiar with the negotiations says.

At the same time, it is unrealistic to expect that Bulgaria will change its position overnight, especially now that cabinet negotiations have just wrapped.

What do the future governing parties think?

The maximum will for compromise has come from WCC, which has proved to be a ray of hope for the government in Skopje since its political launch three months ago. On 13 November, in an interview with the Macedonian TV channel Sittel, Mr Petkov and Mr Vassilev explained that their negotiations would focus on economic rather than historical issues. They cited, as an example, the lack of an air link between Sofia and Skopje, so demonstrating a more pragmatic approach.

Mr Petkov, however, avoided answering whether WCC is ready to remove the veto, especially so soon after assuming power. "The compromise is for Bulgaria to recognize that there are post-WWII realities and that they are what they are - including Macedonia's separate nationality and language, and for the elites in N. Macedonia to recognize that before the war the historical realities were different. This is the only possible compromise that would be acceptable for Bulgaria from my point of view," said Boyko Noev.

Additionally, in September, Mr Petkov announced that "the Bulgarian minority should have protected rights" - a clear reiteration of President Radev's position for equal rights for the Macedonian Bulgarians as a prerequisite for lifting the veto. It is unlikely that Mr Petkov and Mr Vassilev would dare oppose prevailing public sentiment, or the Foreign Ministry's consistent stance, let alone contradict the president who kick started their political careers.

Any quick compromises on the veto are also unlikely in light of the positions of two out of the three coalition partners of WCC. BSP leader Kornelia Ninova said that "the accession of the Republic of North Macedonia to the EU cannot be at the expense of Bulgarian history and historical facts". Even more importantly, the position of TISP - the party that is expected to appoint the next Foreign Minister - is just as unbending. In an August BNT interview TISP leader (and sole known decision maker within the party) Slavi Trifonov said that "the Bulgarian position on the issue is correct and should not be changed". He added: "The ball is in their [Skopje's] court and they have to do something to change it". Democratic Bulgaria, for its part, supports N. Macedonia's accession to EU membership and a new approach, but expresses much more balanced positions than WCC. So the four parties can hardly be expected to unite around the ideas of Mr Petkov and Mr Vassilev, especially given the rather unyielding positions of BSP and TISP.

For over two years, Bulgaria's troubled relationship with North Macedonia has remained an unresolved item in its in-tray. Sofia has not budged from its refusal to even countenance the prospect of Skopje (and, by association - Tirana) entering into EU accession talks. Bulgaria's long-standing objection to N. Macedonia's interpretation of history and its treatment of people who self-identify as Bulgarians has certainly obstructed Skopje's European future. But it has also subjected Sofia to censure from the EU, and, since November - from the US congress.

The advent of a new, reformist government might have given hope to Macedonians and international backers of Skopje's Euroatlantic integration bid that Bulgaria would finally take a more constructive stance. To judge from the cabinet negotiations and public statements coming from the four parties, such hopes were premature.