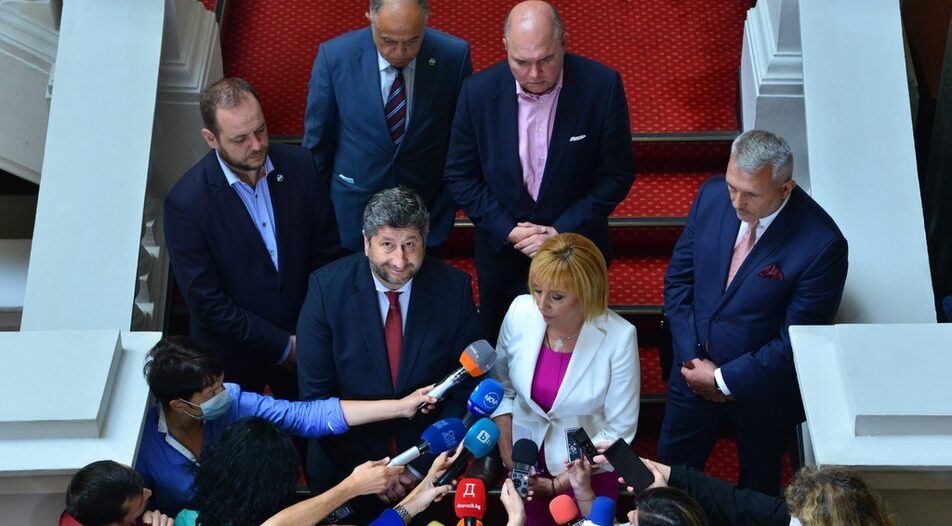 A new cabinet? Hanging by a thread

A new cabinet? Hanging by a thread

Trifonov’s faction will announce its proposal for a cabinet in a few days - but which parties will back it and on what terms?

Movement on the coalition-building front is now tangible. And some would say it was about time. It comes a week into the new Parliament and 16 days after Slavi Trifonov's party, which won the 11 July elections, proposed an expert cabinet that was quickly rejected by all other parties.

Of course, as "coalition has become a dirty word" (Mr Trifonov on 12 July), it won't really be called a coalition but rather a cabinet nominated solely by There is such a people (TISP) party. But because TISP only has 65 MPs, and needs the votes of at least 56 other deputies, it would practically act as one.

But which of the four minor parties will back it and will their demands be met by the leading faction? The last week of parliamentary negotiations provided basic answers, but many unknowns still remain. But first, the knowns:

No government until (at least) Monday

On Wednesday one of the scriptwriters-turned-TISP MP Ivaylo Valchev said that no nominees for cabinet or Prime Minister would be announced by the week's end. A day earlier, another TISP MP, Radostin Vassilev, said the opposite - that a proposal for a government would likely come by Sunday.

The change of heart could be down to the new politicians' lack of political savviness, but could stem from frantic negotiations between TISP and the four other smaller parties, at least three of which have to back their cabinet - BSP, Democratic Bulgaria, MRF and Stand up, BG.

All this is in marked contrast to Mr Trifonov's earlier attempt to present the other political parties with a fait accompli. Yet it has caused other problems. Up until Wednesday, in a bid to salvage the coalition-building efforts, all parties underlined that they were discussing common policy areas rather than potential ministers. These were supposed to be left to TISP to decide.

After a declaration by Democratic Bulgaria leader Hristo Ivanov on Wednesday, followed by a meeting with the leader of Stand up, BG Maya Manolova, it was clear that the two factions' support for a TISP-nominated cabinet hinged on the leading party backing certain transparent commitments.

On Thursday Morning, Mr Yordanov from TISP refuted Mr Ivanov's points in parliament by declaring that his party "won't play by your [Democratic Bulgaria and Stand up, BG!] rules." He then blamed the leader of Democratic Bulgaria for trying to interfere with the selection of cadres for the future cabinet. He also assailed Finance Minister Vassilev, one of the names mentioned by Mr Ivanov, for an alleged copyright infringement committed by a private company of his. Ironically, Mr Yordanov's party had previously sought out Mr Vassilev's participation in their first proposed cabinet!

MRF as the red line

Significantly, the two parties underlined they wanted nothing to do with a government that may need the support of MRF and GERB. According to Mr Ivanov, these two parties remain "hostages to their corrupt cores and while this is the case, they ought not be allowed into positions of power." Ms Manolova added: "We won't support a cabinet in which we see the long arm of GERB or MRF."

The two parties' change of tone came after TISP had indicated an openness to receiving backing from MRF in order to pass their proposed cabinet. TISP and MRF had held talks on Sunday, without concrete progress, but this raised a red flag for the two smaller "protest parties." Democratic Bulgaria even started talking about going into opposition if TISP made concessions vis-a-vis MRF.

Several uncertainties remain about the structure of a future government as well as questions about its longevity. First, the big question is whether TISP will concede to the demands of signing a de facto coalition agreement with the smaller protest parties. This, in turn, could only happen after Mr Trifonov's party names its ministerial nominees and has them approved by the smaller parties.

For the whole formula to succeed, there is one more unknown - the role of BSP. The socialists, the third largest faction in Parliament, have shown signs of reconciliation with TISP (which initially placed them in the same batch of status quo parties as MRF and GERB). There are two ways in which they can back a TISP government: they can come to terms over concrete policy objectives or use procedural instruments to tacitly concede to the anti-GERB formula, without receiving any promises from TISP. For the first scenario to take place, BSP leader Kornelia Ninova demanded that the two parties sign a written agreement. The second one - undoubtedly extremely unpopular for the Socialists - would see the party abstaining from any vote for a new cabinet in the National Assembly.

The Gordian knot would have to be cut - one way or the other - by the end of next week, as TISP parliamentary leader Todor Yordanov promised at the opening session of the Parliament. None of the parties seem keen on a third election this year, so they will probably reach some kind of mutual accord. Yet could such a precarious balancing act prove sustainable? And is it even viable after the heated exchanges of the last two days? Watch this space ...

Movement on the coalition-building front is now tangible. And some would say it was about time. It comes a week into the new Parliament and 16 days after Slavi Trifonov's party, which won the 11 July elections, proposed an expert cabinet that was quickly rejected by all other parties.

Of course, as "coalition has become a dirty word" (Mr Trifonov on 12 July), it won't really be called a coalition but rather a cabinet nominated solely by There is such a people (TISP) party. But because TISP only has 65 MPs, and needs the votes of at least 56 other deputies, it would practically act as one.