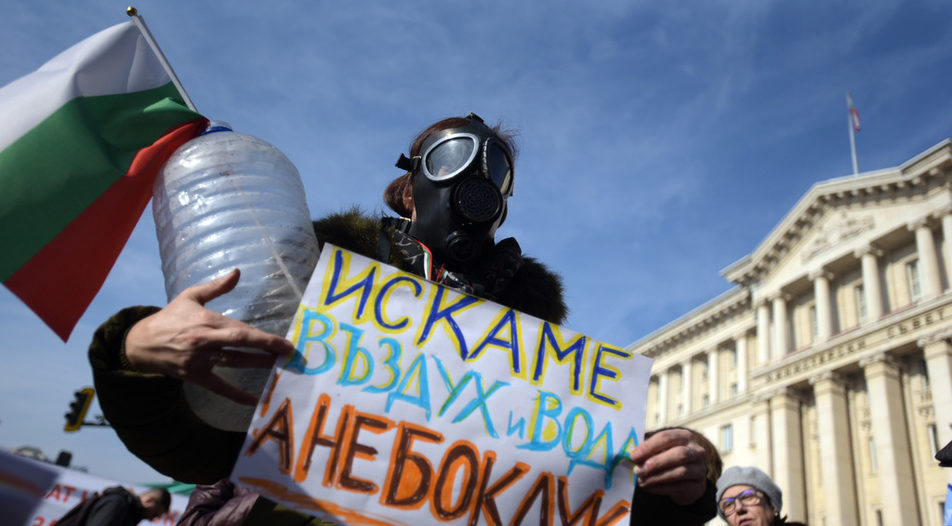 No water to clean the garbage

We want air and water, not garbage

No water to clean the garbage

Many Bulgarian towns live on water rationing and next to piles of imported waste because of intentional neglect by the authorities.

We want air and water, not garbage

"If only we had water to wash away the garbage...."

This morbid joke arises from the situation in Pernik. The city, situated 35 kilometres southwest of Sofia, has been subjected to water rationing for several months, while the local thermal power plant, which occasionally uses waste for fuel, gasses the city's neighbourhoods with heavy smoke. The conditions in the former coal-mining town have become unbearable even for the resilient locals who from an early age had breathed in the industrial smoke and coal dust of the town's factories that used to make it a Socialist-era powerhouse. Now, many of those people join the daily protests in Bulgaria's capital Sofia, which is conveniently close.

The situation in Pernik and several other Bulgarian towns with similar problems are not the result of trivial mismanagement. Both the water shortage and waste pollution have been not only well-known problems, but it seems that the authorities have intentionally turned a blind eye to the looming crises. The dwindling of the water reserves of the Studena dam, Pernik's drinking water source, was detected months ago but the authorities decided to keep the population in the dark before the local elections in November 2019. The same goes for the attempts by power plants in Pernik and in other towns to burn garbage instead of coal, which has also been well-known for years. Yet, no measures have been taken to cease these illegal practices.

Pernik is situated just to the west of the Vitosha mountain and to the south of the Lyulin mountain, i.е. this is an ideal location to have excellent access to the high-quality water supply. But years of neglect have ruined the town's water distribution network.. According to Ivan Vitanov, director of the local water supply company, over 75% of the water that has been flowing from the Studena reservoir has been wasted on the way to people's homes because of outdated infrastructure. A municipality development plan acknowledges that over 60% of the water pipes in the city date back to the 1960s and 1970s and were beyond repair long ago. In addition, most of the public resources for water utilities in recent years were allocated to sewerage systems, a priority for the EU - for Brussels water supply is an issue that was supposed to be solved a long time ago.

The situation was no secret but the local authorities and the water utility concealed the real extent of the problem, fearing a public backlash just before the local elections in November. If measures had been taken earlier, for example by limiting the water supply to industrial consumers and probably introducing moderate water rationing (instead of the current seven dry hours per day), the present severe crisis could have been avoided.

The weather answered the prayers of Pernik citizens in January and February before the government had completed the construction of new water main designed to fill the Studena reservoir with water from the bigger Iskar reservoir that feeds Sofia with drinking water. At the time the water crisis in Pernik was partly alleviated, only four out of 13 km of the emergency pipeline had been laid. Climate was quicker than people and rain and melting snow began slowly filling the Studena reservoir.

Right now, it seems that former minister of environment Neno Dimov will be the only scapegoat in a crisis that is of local political nature, while the responsible local officials will get a free pass just because they are members of the ruling GERB party.

This is not good news for more than 120 thousand Bulgarians who might continue living with water rationing in the 21st century.

The garbage drama was no less predictable, either. Companies related to businessman Hristo Kovachki which have been implicated in illegal waste disposal, have a long history of serious environmental violations that have largely been ignored by the Bulgarian authorities for years. While Prime Minister Boyko Borissov reacted to the waste crisis in his typical manner - feigning surprise and indignation at the "revelation" that trash is being burned at Mr Kovachki's plants, it is his governments that have largely tolerated, if not indirectly backed, those firms' behaviour over the past ten years.

Mr Kovachki officially has no ownership in any energy company, but in practice, he controls eight power plants, making his energy group the biggest privately held one in Bulgaria. Most of those power plants were decrepit back in the early 2000s when the state offered them up for privatization, instead of closing them down outright. The prediction at that time was that they would have a short life before being shut down. However, Mr Kovachki has since then miraculously outmanoeuvred environmental and labour inspections, tax and social security administrations, trade unions and angry citizens exposed to daily pollution. It was helpful that he supported a small political party that could mobilize enough votes to swing elections in the districts his companies work in.

The import of waste as an energy source started back in 2014 with companies related to Valentin Zlatev, the long-time local representative of Russia's Lukoil. The origin of the shipments was Italy, which has always had problems with its garbage disposal. The shipments have become easier as of 2007, because of the EU's single market - if the waste is not qualified as a dangerous product, it could travel freely. However, the initial probes didn't pick up speed, because it turned out that the imports from Italy contained partially separated garbage rather than refuse-derived fuel (RDF), which power plants and cement factories are looking for.

The imports started in earnest in 2017, when prices for CO2 allowances jumped. With their current price, Bulgaria's coal-fired thermal power plants (TPP) add approximately 30 euro to every megawatt-hour of electricity they produce. If instead of coal they burn waste, which qualifies as a renewable product under the EU rules, they are not required to buy emission allowances. As a result, the companies profit twice - first by using fuel for free and second by slashing their environmental expenses.

Most power plants and cement factories would not touch the garbage, because their installations are not adapted for waste incineration, but this was not the case with the several power plants related to Hristo Kovachki. Even though environmental organizations, as well as energy companies exposed to unfair competition, have complained for years, the authorities have ignored Mr Kovachki's dirty secret, fearing social unrest if his plants went bust. Left unchecked, several of the power plants in Mr Kovachki's group began burning garbage, even before their permits had been approved. As a result, Pernik, Galabovo, Bobov Dol and Sliven have suffered from experiments that should have never been allowed.

An outright ban on waste incineration at facilities not equipped to do that could have solved the problem. But such a ban has never materialized. Many of the local environmental inspectors, for example, are related to the workers in some of Mr Kovachki coal mines and TPPs. Instead, the government is teetering between various populist measures to ban waste imports entirely which might destroy entire industries relying on products that are considered waste, including in the metallurgic and clothing sectors.

In short, the two crises are the latest examples of how the intertwining of bad governance, poor and short-sighted policymaking and hidden political and economic connections are making the lives of hundreds of thousands of Bulgarians miserable - all for the sake of Prime Minister Borissov's political survival and GERB's stable stranglehold over the country.

"If only we had water to wash away the garbage...."

This morbid joke arises from the situation in Pernik. The city, situated 35 kilometres southwest of Sofia, has been subjected to water rationing for several months, while the local thermal power plant, which occasionally uses waste for fuel, gasses the city's neighbourhoods with heavy smoke. The conditions in the former coal-mining town have become unbearable even for the resilient locals who from an early age had breathed in the industrial smoke and coal dust of the town's factories that used to make it a Socialist-era powerhouse. Now, many of those people join the daily protests in Bulgaria's capital Sofia, which is conveniently close.