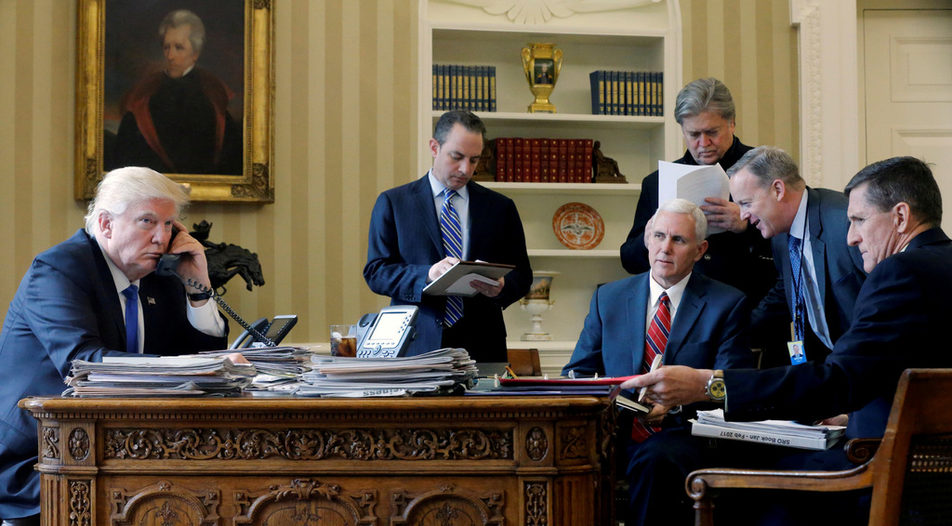 Donald J. Trump pledges to make America great (again). Is that great news for U.S. ally Bulgaria though? Not at all, if you take into account the new president's unilateralist instincts and his apparent fondness for Vladimir Putin ("a very smart" individual).

Even if you don't buy the story that Russian hacking got Mr. Trump into the White House, his scepticism as to NATO's usefulness is more than worrisome. The new president views relations with allies in purely transactional terms - as a sequence of one-off bargains, rather than a matter of long-term commitments resting on commonality of values. "Pay your fair share and the U.S. may be on your side when push comes to shove" is the message for the likes of Bulgaria.

What is more, Mr. Trump seems to believe Russia could be enlisted as an ally against the self-proclaimed Islamic State (IS). He might not pull the plug on NATO as he most certainly would on the Transpacific Trade Partnership (TTP) but Eastern Europe has a good reason to fear the U.S. support against Moscow is not a given.

No doubt Mr. Trump might soon face headwinds and discover his room for manoeuvre is narrower than expected. Republicans in Congress could well rein in his assault on free trade and dampen enthusiasm for Russia amidst the hacking scandal. He could also find out that the cost of accommodating the Kremlin outweighs the potential gains. Russians have a long list of demands, from the lifting of sanctions and the recognition of Crimea's annexation to the acceptance that Bashar al-Assad should stay in power. However, it has much less to offer in return to the U.S. Defeating the IS will prove tricky amidst lack of substantial military and civilian presence on the ground. The U.S. has no intention to police "Sunnistan" spanning Syria and Iraq. Nor does Russia, which lacks the capability as well. In Eastern Europe, rolling back NATO's decision on forward deployment of troops and hardware in the Baltics, Poland and Romania could prove tricky. In short, don't put (all) your money on a grand bargain cut by Mr. Trump and Vladimir Vladimirovich.

The more long-term problem, which should be of concern to Bulgaria is the changing nature of transatlantic relations. For all their profound differences, the Obama administration and Mr. Trump share the understanding that America's key priorities are at home. It is worth remembering that Barack Obama, too, was all about reducing the U.S. role in world affairs to focus on rebuilding the economy and transforming the country from within. Having opposed the 2003 Iraq war, Mr. Obama will go down in history as the president who eschewed foreign entanglements. During the 2011 Libya intervention, he famously coined the "lead from behind" doctrine. The U.S. would let its European allies, UK and France, do the heavy lifting, backing them up to the extent it was necessary. Though the Ukraine crisis reinvigorated NATO and drew America back, the attitude in Washington is that it is high time to take care of its own security. The withdrawal from Europe as well as from the Middle East would allow the U.S. to focus on Asia-Pacific and the challenge posed by the rise of China.

U.S. aloofness leaves Eastern Europe with not many good options. In Bulgaria's case, however, there will be no shortage of politicians praising the new détente as an opportunity. They will hedge bets and build new bridges to Moscow. If and when the Western sanctions are partially relaxed, the public expectations for an economic pay-off will rise, too. Such hopes will no doubt end in frustration that there will be no steep increase of Bulgarian exports to the Russian market nor a significant influx of investment. And if Moscow starts banging on the table with even greater vigor, the price of U.S. disengagement will become even higher.

That leaves the EU as an anchor of stability. This might sound ironic given the acute, overlapping crises that haunt the Union. Not to mention the chronic inability of the 28-strong bloc (to shrink to 27 member states once the UK leaves) to conduct assertive foreign policy backed by military power. In this day and age, the EU may look as a sad reminder of a bygone era when liberal ideas thrived and open borders were the norm. But to state the obvious, the EU is the provider of economic security for Bulgaria on account of the financial transfers and volumes of trade and investment linked to membership. The EU won't replace the U.S. as underwriter of European security but, still, it remains the most reliable multilateral framework helping the country navigate the stormy waters of the global economy and politics. If Mr. Trump's neo-mercantilism and beggar-thy-neighbor behavior spreads, small, open economies like Bulgaria's should seek to integrate more deeply into wider trading blocs - such as the EU.

This, again, is easier said than done. With Brexit, Europe is moving further down the road of bifurcating into a tightly knit core around the eurozone and loose periphery. Bulgaria's strategic interest is to move from the outer into the inner circle of integration. In principle, it is committed to adopting the euro but in practice it does not appear to be putting a great deal of effort in that direction. Even the partial integration into the European Banking Union, an institution tied to the Single Market rather than the eurozone, is not high on the agenda. That is a grave mistake given the huge stakes involved. But most of all, Bulgaria has failed to implement the sort of institutional reforms needed to uphold the rule of law and convince the other members that it is a success story.

Ten years after Bulgaria joined the EU in 2007, what is painfully clear is that Brussels cannot fix the country single-handedly. It is a heroic assumption that Bulgaria can fix itself, too, but let us at least hope that seismic events like Trump's election serve as a wakeup call of sorts.

Dimitar Bechev is a Nonresident Senior Fellow at the Atlantic Council as well as as a researcher at the Center for Slavic, Eurasian and East European Studies, University of North Carolina - Chapel Hill

Donald J. Trump pledges to make America great (again). Is that great news for U.S. ally Bulgaria though? Not at all, if you take into account the new president's unilateralist instincts and his apparent fondness for Vladimir Putin ("a very smart" individual).

Even if you don't buy the story that Russian hacking got Mr. Trump into the White House, his scepticism as to NATO's usefulness is more than worrisome. The new president views relations with allies in purely transactional terms - as a sequence of one-off bargains, rather than a matter of long-term commitments resting on commonality of values. "Pay your fair share and the U.S. may be on your side when push comes to shove" is the message for the likes of Bulgaria.