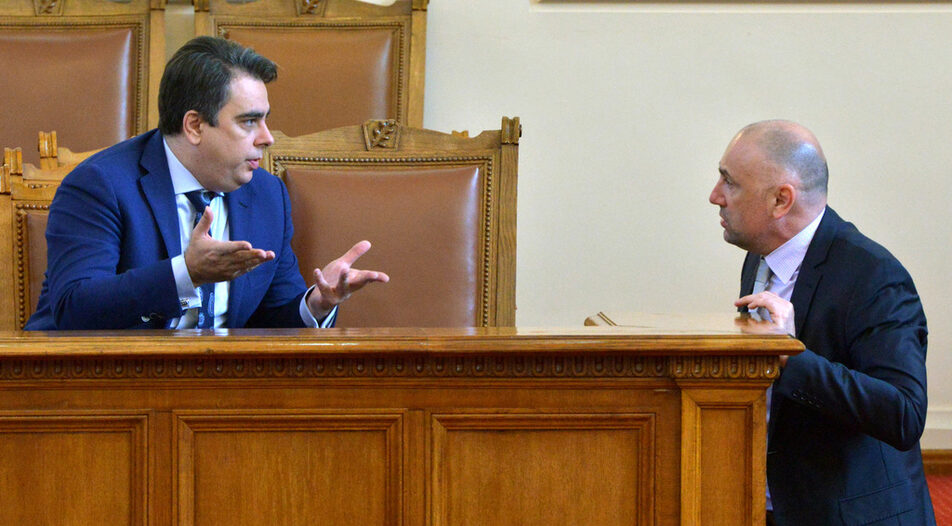 Paradoxically, this lavish spending was proposed by the same parties which several days earlier demanded the vote of no confidence in Petkov's cabinet, citing its "poor financial and economic management of the state". They also criticized the government's anti-crisis measures, saying they encourage consumption, thereby spurring inflation. However, the new expenses proposed by this informal coalition will have precisely the same effect - more inflation and poor chances for adjustments to the budget not only this year but also in 2023. All this is happening against the backdrop of potential new elections and a new period of political instability as well as turbulence for the global economy, and hence also for the Bulgarian economy.

The MPs from TISP, MRF, GERB and Vazrazdane said that the Finance Ministry was too conservative in its estimates and accepted the proposal of the chairman of the budget commission Lyubomir Karimanski (TISP) to increase the expected revenues from VAT by the end of the year by 760 million levs. Thus, on a consolidated basis, the revenues in the 2022 budget should reach almost 60 billion levs (30 billion euro). The increase was approved despite warnings by Finance Minister Assen Vassilev that there is a real risk that such VAT revenues will not be achieved, as well as that such an outcome may even lead to the freezing of payments to businesses.

"The Finance Ministry will have to impose limits on the payment of salaries, and payments to businesses may be frozen. Companies working with the government are at risk as it may turn out to be a bad payer in the last quarter," he said during the vote on the proposed changes in the budget commission.

And he is right - due to uncertainties surrounding the war in Ukraine, GDP growth forecasts have been constantly revised downwards in recent months. The outlined interest rate hike by the European Central Bank (ECB) further increases the pressure. It is true that there are some buffers in the budget - with capital expenditures, which are currently lagging. Inflation also supports higher revenue collection..

After the informal coalition of four parties increased the revenue target in the revised budget, it also approved more than 900 million levs in new expenses. Once endorsed, such expenses are then difficult to cut, because they are related to an increase in operating costs including salaries at many state departments and budget-funded organizations - from the Ministry of the Interior to the National Social Insurance Institute. The additional expenses amount to nearly 915 million levs. Part of them will be financed from the expected additional VAT revenue of 760 million levs. A special fund for the restructuring of the administration created by the government will be used to cover the provided salary increase at the Interior Ministry.

Thus, the budget balance will remain at the levels estimated by the finance department - 6.2 billion levs, or 4.5% of GDP. However, the current expenditures of the state, or those that are the most difficult to limit even in a crisis, will exceed 36% of GDP.

"Politicians have started to prepare for elections. They insist on increased spending, investments and aid to the population, which is in sharp contrast to everything that was said in the previous days and weeks when they said Bulgaria was almost bankrupt," financier Julian Voinov commented to Bulgarian National Radio.

Some mistakes and new VAT discounts

During the final vote on June 29, the Parliament approved two tax proposals that had not been accepted by the budget commission - zero VAT rate for flour and increased amount of legally recognized costs for lawyers.

When the proposal for zero VAT rate for bread and flour was announced, it drew a lot of criticism, as it is debatable how much it will decrease the price of the product, but on the other hand, it will make the administration of the tax by the National Revenue Agency very difficult.

The only suggestion that did not pass was the request of the cabinet to increase the excise duty on cigarettes from this year. All other proposals of the outgoing government related to the package of anti-crisis measures, such as reducing to 9% the VAT rate for heating and natural gas and scrapping of excise duty on electricity, natural and liquefied gas, were accepted without debate.

If there is any good news, it is that this time, at least with pensions, there is predictability after the MPs endorsed the government's proposal, although it is controversial. Thus, from July 1, pensions will increase by 10% and 60 levs per month which until now were allocated as the so-called Covid supplement will be added. As a result, the minimum pension will rise to 467 levs now, and the maximum one will increase to 3,400 levs from October. The bad thing is that all this heralds an even bigger deficit in the state-funded pillar of the pension system, which will have to be financed by taxes. As the chairman of the social insurance commission Iskren Arabadjiev (WCC) admitted, if years ago the deficit in the state-run pension fund was around 25%, now it exceeds 40%. However, according to him, this deficit is acceptable, and pension costs are equivalent to nearly 10% of GDP.

In general, however, all this new spending on pensions and wages also means less money for other policies. Or - as some economists warn - the state will need to raise some taxes.

"One of the options for the next government is to bring back some balance in budget spending step by step, which takes three or four years. You fix spending and let inflation and the growth of nominal spending burn out these imbalances in the budget," explains financier Lyubomir Datsov. However, this is rather an optimistic scenario. If the parties in this parliament fail to agree on a new government and a new fragile coalition is formed after early elections, the country will see more budget revisions like this.

300 million levs for supporting farmers under national measures to compensate for the increased prices of energy, animal feed, preparations for plant protection

2.5 million levs for an average 10% salary increase at regional administrations

55 million levs to St. Catherine Hospital in Sofia for the equipment of a new unit for lung and heart transplants and the construction of a children's hospital in Plovdiv

1.9 million levs for salary increases at the Institute of Meteorology

20 million levs to cover costs of kindergartens and schools

20 million levs for subsidies to universities

5.5. million levs for an increase in the remuneration of the staff of the Agricultural Academy

2.25 million levs for the repair of the Faculty of Theology's building in Sofia

3.5 million levs for the renovation of the Zograf Monastery

5.8 million levs for the Bulgarian Orthodox Church and the Muslim denomination in compensation for increased electricity costs