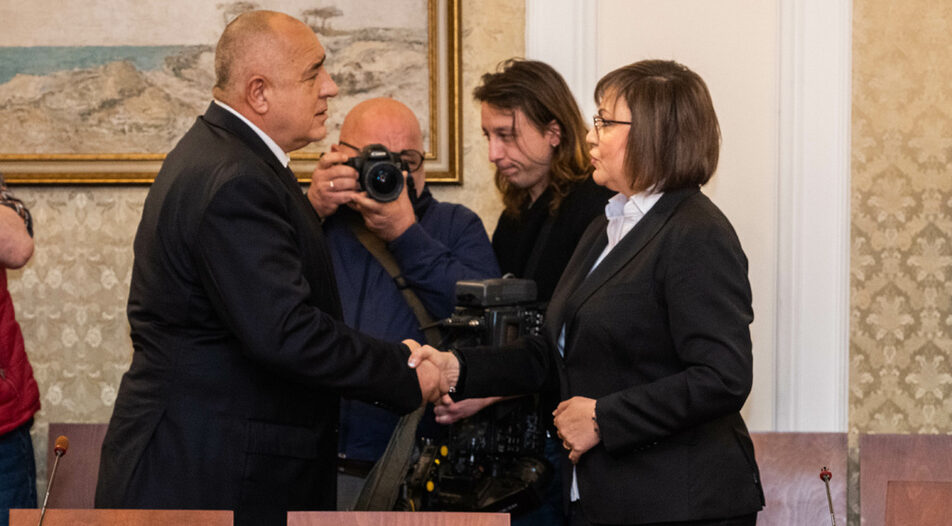 Bulgaria: the election season is far from over

Bulgaria: the election season is far from over

More parties and new coalitions promise to enter the next contest, which looks set for 2 April

"The largest parties did not want to form a government and that doomed the third mandate." With these words President Rumen Radev informally announced that the next early elections would take place at the beginning of April, probably the first Sunday of the month - 2 April, and that the new-old caretaker PM would be Galab Donev.

The parties' unwillingness to govern and be accountable for their actions in the current crisis could trigger more voter apathy, Mr Radev made clear.

The declaration came just four days after the President had passed the third and last mandate to form a cabinet to his traditional choice - BSP, which also, as tradition in the past 2 years would have it, returned it unfulfilled.

So it is that Bulgaria seems doomed to repeat the past two years of inconclusive elections and revolving doors. At the same time, however, the prospect of lower turnout and a similar stalemate is spurring the main political forces to make some changes. What is more, some new (or rather long-forgotten) contestants have made bids to enter the next racе. So, what can we expect? Most probably, a new tie-in after the April vote, and yet another election in autumn, alongside the local vote. But there is always the possibility for a cabinet, if one of the two alliances that are being formed manage (somehow) to pull a more decisive election win in the early vote...

A government with GERB, BSP and MRF behind it is now quite possible. It will not happen now, but its preparation is obviously underway. These are the conclusions of the meeting held on Friday between the leaders of the three formations, which was also attended by the chairman of Bulgarian Rise Stefan Yanev.

BSP leader Kornelia Ninova convened the meeting. She invited all the leaders of the formations in the parliament to clarify whether a last ditch government could be formed in the current National Assembly, but her ex-partners from WCC and Democratic Bulgaria refused to participate, as well as the fringe Vazrazhdane.

At the beginning of the meeting, Ms Ninova said that if there was desire for a government, the parties could find a way, but, if there wasn't, then any old excuse could be found. Despite that, the present parties - which cumulatively have 140 MPs and can easily form a stable majority - resisted this option for now but highlighted the possibility of doing so after the early vote.

The clearest signal came from GERB leader and ex-pm Boyko Borissov, who said he would ask his party's congress to revise its long-standing opposition to coalitions with BSP, as according to him the Socialists "have changed a lot." BSP also sent a similar signal, with the National Council of the party allowing Ms Ninova to meet GERB for the first time in years. This exchange of gestures may well herald a potential thaw, which might escalate into some form of joint action after the vote.

Consolidation in the reformist sector, too

And while the "old" parties contemplated open collaboration for the first time, their opponents from the reformist sector also mulled potential consolidation. On the threshold of the upcoming fifth extraordinary parliamentary elections, WCC and Democratic Bulgaria discuss the possibility of a joint ticket (which did not happen last year because of WCC's opposition).

First, WCC co-chairman Kiril Petkov mentioned a possible electoral coalition between the two formations not only in the upcoming parliamentary vote, but also in the local elections in the autumn. Then, last week, the party's National Council gave a mandate to the leadership to start talks with Democratic Bulgaria for a joint participation.

"The time has come for us to work together," Petkov said of the party's decision and even proposed an election platform to be joined by civil society organizations. "Our mission is to unite all the good forces in Bulgaria that are fragmented and to continue what we started a year ago. All those active citizens who have created some organization in their hometown to solve some problem. We realized that individual struggles are very difficult because the deep state in Bulgaria is united - so we have to make a common front against it," Mr Petkov told bTV.

Democratic Bulgaria co-chairman Hristo Ivanov also supported the idea of common electoral lists for the parliamentary vote and common mayoral candidacies, but was a tad more reserved when it came to potential wider civic coalitions.

The big question regarding the joint participation of the two parties is whether the unification would trigger a surge of support, or if it would entail electoral losses, given that both parties have factions opposed to a pact, and that they have attracted quite different electorates in the past.

Voices from the past and the Saviors of Sofia

Finally, the entry of at least three new (or, at least, long forgotten) political actors promises to also influence upcoming elections. First, comes the new-old competition on the left - a congregation of splinter cells of the BSP, which calls itself simply "The Left." It includes Socialist renegades such as ex-President Georgi Parvanov and his ABV party, Maya Manolova's Stand Up, BG and Tatyana Doncheva's Dvizhenie 21. While the new union is open to coalition with BSP, it first demands that Ms Ninova is ousted - which is a possibility, as BSP will have a national congress in a few weeks' time. If the collaboration between the new faction and the Socialists fails to materialize, it is likely that the mother party might further hemorrhage support to The Left.

The second resurrected newcomer that announced its plans to participate in the election is the party of ex-king Simeon II NDSV. While many of its cadres have consistently participated in public life (most famously Ognyan Gerdzhikov, who became caretaker PM in 2017), the party has been out of active politics for more than a decade.

Last, but not least, a week ago marked the formal establishment of the Save Sofia party. The movement of former mayoral contestant and current Sofia city councilor Boris Bonev does not plan to take part in the parliamentary vote, but will definitely take part in the battle for Sofia. This could be either a blessing or a curse for the anti-GERB forces. If they don't manage to coordinate and agree on a coalition for the local elections, this might result in GERB continuing to rule in the capital because their opponents' vote would be split. Alternatively, the popularity of Bonev, who won a significant share of the vote in the previous elections, may finally end Mayor Yordanka Fandakova's reign as the capital's longest serving mayor.

And some referendums as a supplement

Finally, if the political calendar did not appear complicated already, two potential referendums are in the pipeline - Vazrazhdane's call for keeping the Bulgarian lev and pushing the adoption of the Euro for the 2040s and TISP's proposal for a Presidential republic.

While it is far from certain that these referendums would actually take place, if they do, they could be the Black Swan that overturns the cart of Bulgarian democracy. Buckle up - 2023 promises to be wild!

"The largest parties did not want to form a government and that doomed the third mandate." With these words President Rumen Radev informally announced that the next early elections would take place at the beginning of April, probably the first Sunday of the month - 2 April, and that the new-old caretaker PM would be Galab Donev.

The parties' unwillingness to govern and be accountable for their actions in the current crisis could trigger more voter apathy, Mr Radev made clear.