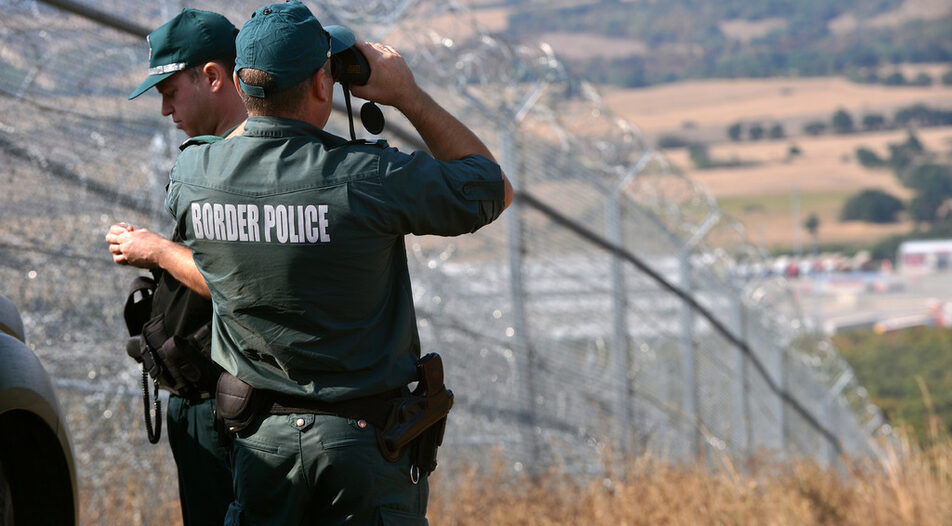 Police officers trying to stop illegal migrants lack sufficient equipment, and are not allowed to shoot unless "extreme necessity" demands it

Police officers trying to stop illegal migrants lack sufficient equipment, and are not allowed to shoot unless "extreme necessity" demands it

"Two years ago, this would not have happened. This was not a talking point in Bulgarian society." Perhaps unsurprisingly, just hours after a police officer was shot dead at the border with Turkey two weeks ago, GERB leader Boyko Borissov exploited events to attack current Interior Minister Ivan Demerdzhiev. Many other MPs and former interior ministers from his party later followed suit.

Two Mondays ago, 32-year-old policeman Petar Bachvarov was fatally shot near the village of Golyam Dervent on the border with Turkey while on patrol with a military police officer. It was unclear who was responsible - the Interior Ministry produced conflicting versions, blaming migrant smugglers and drug traffickers.

The shocking fatality came little more than two months after a bus driven by migrants hit a police patrol, killing two policemen following a lengthy chase by the Black Sea. The weeks after the border incident saw at least another half a dozen dangerous pursuits of smugglers, one of which resulted in a crash with another police car that left an officer critically injured.

Notwithstanding GERB's grandstanding and politicking, the increased migratory pressure and the spate of tragic incidents have little to do with the powers-that-be Bulgaria. Responsibility really lies with the Turkish authorities and their treatment of refugees on its territory (over 4 million according to UNHCR estimates) and, especially, the wave of expulsions that has triggered an exodus of people trying to access Europe.

Clearly, the three police officers' deaths raise difficult questions about the response of the Bulgarian authorities to increased migrant pressure, and also about the preparedness of the enforcement agencies.

Statistics show that the migration situation is now comparable to that of six years ago. In the summer of 2016, the Ministry of Interior was detaining 100 illegal entrants every day but this summer actually saw those numbers surpassed.

Both then and now, Bulgaria was a transit country. In the past, it was migrants coming mainly from Afghanistan and Syria who were aiming to reach Western Europe. The new development this year, according to Interior Ministry statistics, is an increase in the proportion of migrants from North Africa (mainly Morocco). A total of 14,427 migrants have been detained for entering Bulgaria illegally between January and October this year. Of them, 2,036 have been captured while entering the state border, 2,069 at the exit, and 10,322 - in the interior. While the number is still significantly below the 2016 peak of about 45,000 people, it is still almost double the number of detainees for the same period in 2021 (8254).

But this is far from a Bulgarian trend alone. According to the latest data available from the European Border and Coast Guard Agency (Frontex), 106 000 crossings were recorded from the beginning of January to September this year along the so-called Balkan route to the EU. This is 170% more than in the same period last year. Hence Austria, the Czech Republic, Denmark, Norway, Sweden, France, Germany have responded to this influx by temporarily restoring border controls.

Pushbacks - from Frontex to Bulgaria

All this comes in the context of a damning European Anti-Fraud Office (OLAF) report on Frontex's illegal push backs of migrants, which even led to the resignation of former Frontex director, Fabrice Legheri. The report focused on Greek border authorities' attempts to repel migrants arriving by sea.

The main accusation against the Warsaw-based agency's employees is that they turned a blind eye to illegal practices such as forcibly repelling migrants, which endanger migrants' lives and also breach the terms of the Geneva Convention. These conclusions apply not only to border police officers from various EU countries who work for the agency, but also to representatives of its senior management.

Although Bulgaria is not the primary focus of OLAF's report, there is evidence that the country's police officers have also resorted to such practices. For example, the authors of a recent Amnesty International report claim that "'Bulgaria continued to systematically turn away migrants and asylum seekers at its borders. By the end of [2021], more than 1,100 cases of push-back had been recorded, affecting at least 13,000 people." Human rights organizations allege that border guards' actions actually go beyond illegal pushbacks and even come close to kidnapping. Reportedly, migrants who have already entered Bulgarian territory are forcibly detained and returned across the green border to Turkey.

After the deaths of the two policemen in Burgas, caretaker Interior Minister Ivan Demerdzhiev hinted that members of the border police were involved in trafficking activities. This was followed by a reshuffle of senior positions in the agency, but not by accusations against specific individuals.

Ministry of Interior reports highlight that many migrants are arrested on the highways leading to Western Bulgaria. Significantly, however, more than half of those detained while trying to leave Bulgaria for Serbia are without the so-called AFIS - the registration (fingerprinting, taking identity data, etc.) that is conducted by the migration services when a third country national is detained. So, effectively, these are people who have passed through the whole country without the police noticing. To these statistics, one can add estimates from the Belgrade-based organization Info Park that the illegal trafficking of migrants from Bulgaria to Serbia has reached 400 people per day. This has triggered a humanitarian problem in the Serbian town of Pirot.

This brings us to the main question: are the police up to the task of controlling illegal migration without endangering their officers' lives? The short answer is: not really. Internal Minister Demerdzhiev, at a recent Parliamentary hearing, cited the issues confronting his subordinates.

Police officers trying to stop illegal migrants lack sufficient equipment, and are not allowed to shoot unless "extreme necessity" demands it; they lack specialized training and qualifications, and do not have enough time for professional training and practice; not only do many of them not have spike strips to stop vehicles in the boot of the patrol car or other technical means, but they also lack necessities such as torches. Only the lucky ones have fired 5 rounds per practice drill with their service weapon every year. At the same time, police officers are required to keep a paper record of the e-mails they receive among other paperwork they have to fill.

Mr Demerdzhiev explained that confrontations with law enforcement officers are increasing, against the background of greater migrant pressure, simply because police officers are no longer ignoring trafficking. In other words, they are just trying to do their job. He admitted that police had only introduced a protocol of action to guide officers on how to react to a speeding vehicle that refuses to stop (and began training for such events) two months after the deadly incident in Burgas. He added that smugglers are also using ever more powerful vehicles, which makes it hard for police officers to keep up with them, let alone stop them.

Representatives of the police trade union summarize the issue by saying that "the Internal Ministry is in a state of clinical death" and that "deep and comprehensive reform" is needed. Otherwise, they threaten protests. In the meantime, it is likely that tragic incidents will continue

"Two years ago, this would not have happened. This was not a talking point in Bulgarian society." Perhaps unsurprisingly, just hours after a police officer was shot dead at the border with Turkey two weeks ago, GERB leader Boyko Borissov exploited events to attack current Interior Minister Ivan Demerdzhiev. Many other MPs and former interior ministers from his party later followed suit.

Two Mondays ago, 32-year-old policeman Petar Bachvarov was fatally shot near the village of Golyam Dervent on the border with Turkey while on patrol with a military police officer. It was unclear who was responsible - the Interior Ministry produced conflicting versions, blaming migrant smugglers and drug traffickers.