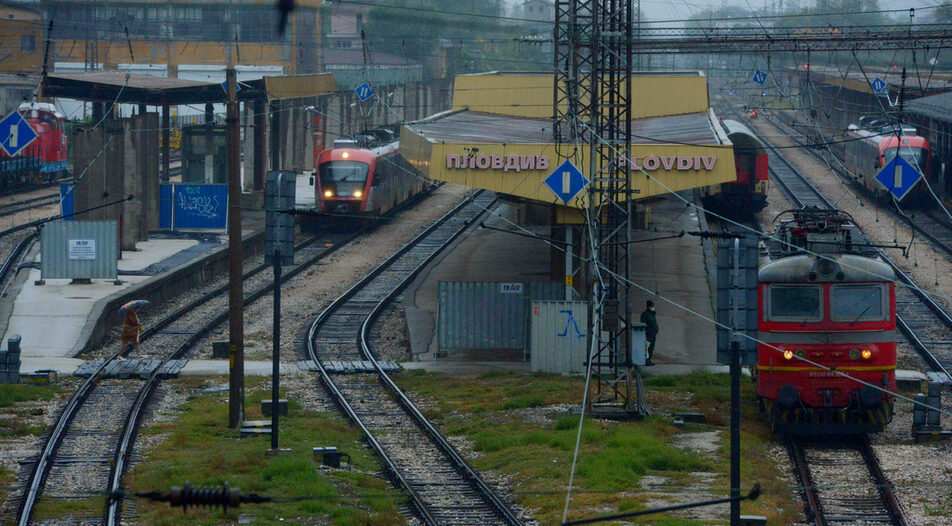 Trains are the only future if growth is to continue

Trains, cities, and Elon Musk in the Northwest

Trains are the only future if growth is to continue

So here's the thing about trains. They are a pain to build and hard to operate. They are very capital intensive, and they usually require a state to be involved.

Yet once they are built, they are the most cost effective, low-emission, convenient mass-transit system there is. Bulgaria has them. Meaning, it has railroads of some kind that criss-cross the country. This is a solid ground to work on. Yet we're not using it, intentionally or not.

We've been renovating one line for 14 years now. And will do for some 6 more, at least. So the state is not the best bet, if you want to use a good rail service any time soon.

I've been leading a discussion about that in Plovdiv, where I live now. It was a heated one, because people tend to get agitated when they lack sufficient transportation options and have to deal with that day-in, day-out. The discussion involved 2 municipalities - Plovdiv and Asenovgrad - several large industrial businesses and some active citizens.

The municipalities claim to be powerless. The state owns and operates the lines and trains, they are simply users of the service. If the service is bad, there is nothing they can do about it.

That was obviously irritating to businesses, who bus in and out thousands of people every day, some of them from up to 50 km away. "We're not transport companies", said one of them.

Yet I think they are, in a way, both wrong.

The local authorities - because they voluntarily give up any agency in dealing with a huge problem. Plovdiv is stuck with cars. Trains are the only future if growth is to continue. It has the infrastructure, it needs to find a way to unite some municipalities and start operating rail lines. It's not easy, yet it is not undoable. It is also not cheap.

Here is where the businesses come in. They might not want to be in that business, but they already are. In order to have workers, they are doing what is necessary to bring them in. So maybe participating financially in a much more efficient way of transportation, combining the power of local authorities and of the whole business community will be much more beneficial in the long run instead of paying for a bus.

There are ways to do that and examples in the world. Yet my point is, that the one without the other will not probably work. But the two together just might.

This newsletter is helped by

Political charades go on with no end in sight 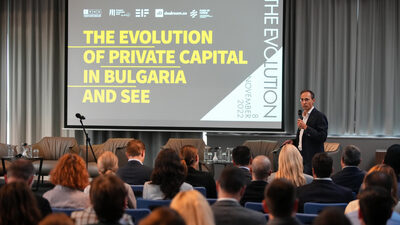 If you were wondering whether the (not so) recently elected 48th Parliament has moved any closer to the creation of a coalition, wonder no more - the answer is a clear-cut "no". This week saw more of the now traditional back-and-forth between parties and the president, but little in terms of consequential decisions.

In an attempt to seize the initiative, on Wednesday WCC and Democratic Bulgaria proposed a minority cabinet, which was supposed to be implemented with the potential second mandate. The idea is a bit strange - the two parties are effectively telling GERB that they would not support its first mandate, but are tacitly attempting to coerce the winning party to support them under the premise that they will carry out a wide-ranging reform program.

Of course, this would never work - GERB would be humiliated if they agreed. So the party's MPs sent a direct message to the reformist duo. On Thursday, despite the advice given by GERB leader Boyko Borissov to discuss the controversial changes to the electoral code, including the reintroduction of paper ballots, the leading party deposited them to the General Assembly for final voting.

In the meantime, the de facto ruler of Bulgaria, President Rumen Radev, appears to be preparing for yet another election. On Monday, while meeting the sixth (and last but one) largest party - Democratic Bulgaria - for consultations, Mr Radev said that, if GERB and then WCC fail to form a cabinet with the first two exploratory mandates, the third - and final one - would be handed out after the New Year.

Then, if it is not implemented, early elections would be held in March. For now, the likeliest date for new early elections is March 12, and if such a scenario is reached, parliament would be dissolved by January 13 at the latest.

Bulgaria's entry into the European free travel zone is looking increasingly unlikely. This week Austria joined the Nordic choir in opposing the entry of Sofia and Bucharest, as well as Croatia, at the upcoming Council of the EU summit in December. Austria had been expected to block the entry of all three countries.

Yet a visit by Austrian Chancellor Karl Nehamer on Thursday revealed that Vienna would not, after all, block Zagreb's application. "We will support Croatia's accession to the Schengen area, but we will be critical of the efforts of Bulgaria and Romania," Croatian newspaper Jutarnji List quoted the chancellor as saying. To Capital Weekly, Austrian interior ministry said it was unhappy with the two countries' porous borders following the increased influx of undocumented migrants reaching Austria.

Speaking of Bulgaria's struggle with illegal migration, this week saw more incidents involving trafficked persons. On Tuesday, a policeman was left in a critical condition after a minibus carrying undocumented migrants, which he was trying to intercept, crashed into his car. The incident is eerily reminiscent of another tragic incident earlier this summer in which two Burgas policemen tried to use their vehicle to stop a speeding bus.

The most recent case, in which a police patrol tried to stop a car with Polish registration carrying illegal migrants, was on Wednesday morning (23 November). This incident in the Dragoman area saw police in hot pursuit all the way from Sofia, reaching speeds of up to 200 km/h.

BSP, WCC and the MRF's proposals for higher pensions were rejected by a tripartite meeting. For now, it seems like the caretaker cabinet also opposes them as their adoption would require additional billions which have not been properly planned.

The risks associated with Bulgaria adopting the euro after 2025 have increased. The main obstacle to the single currency from the beginning of 2024 is inflation, which is expected to remain high in the first quarter of next year. This is stated in the latest report of the international rating agency Fitch Ratings. In it, the agency confirms the long-term credit rating of Bulgaria - 'BBB' with a positive outlook.

are the revenues from the gambling sector in Bulgaria in 2021. This is 25% up compared to 2020. In the last two years, the sector has grown at a double-digit rate.

is the unemployment rate in the third quarter NSI reports. The indicator is down by 0.9% compared to the same period in 2021.

The fintech firm goes public on December 6 with an offer for 10 million levs. The company, which has shares in the Bulgarian unicorn Payhawk, Settle Bulgaria, Convenience, and others, will offer investors 1.7752 million shares with an issue price of 3.38 levs.

The betting giant is the second Bulgarian company to be traded in Frankfurt. Telematic Interactive, which manages the online gambling brand, will try to list on the foreign exchange next year.

So we want to sell Russian oil, after all

Earlier this week the Deputy Prime Minister Hristo Alexiev said that from 1 January 2023, the Bulgarian oil refinery in Burgas Lukoil Neftochim Burgas had promised to transfer its economic and financial endeavors to Bulgaria. This means it will fall under Bulgarian tax laws and not, as before, those of the Netherlands or Switzerland.

Government calculations showed that, following a windfall tax on the Bulgarian enterprise's excess profits, it would contribute about 100 million levs to the coffers. Next year, if energy prices remain as they are, it will pay about 700 million levs (for comparison, in 2021 the company paid a mere BGN 3.5 million in profit tax).

The date after which the oldest and most polluting vehicles from the ЕURO 1 would (hopefully) be barred from entering the city center of Sofia, according to a decision by the municipal authorities of the capital. A year later, the limitation would be extended to the EURO 2 vehicles.

The GERB mouthpiece was loud and clear when he confessed why exactly his party insists on bringing back paper ballots, despite clearly winning the last elections. In a bTV interview this week, he asked rhetorically: "What is the problem with the [voting] machines if we win the vote? The problem is in our margin of victory."

The Macedonian local club with a Bulgarian consciousness, provocatively named after the last Bulgarian king, Tsar Boris III, got attacked for the second time in a week - this time with a firearm. Luckily, there were no injuries, but the incident will likely further strain Sofia-Skopje relations.

Word of the Week: Тесла (adze)

The internet is a strange place and sometimes it creates even stranger situations in the real world. Take this one: an artsy page posts on Twitter a (highly retouched) picture of the Belogradchik fortress on top of the similarly named rock formation in the heart of the Bulgarian Northwest.

The algorithm of the social media somehow reveals its image to Twitter's recently anointed billionaire owner, Elon Musk, who also happens to be an avid gamer. He comments on it, saying that it replicates a screenshot from his favorite PC game Elden Ring.

At lightning speed Musk is invited to visit Bulgaria by Tourism Minister Ilin Dimitrov. Meanwhile, a local restaurant posts alleged correspondence between its chef and SpaceX, another company that the billionaire owns, where a reservation under his name has been made for next April.

Well, this promptly opens the floodgates to Bulgarian humor and soon you have hundreds of jokes about Elon coming to the Northwest. Maybe he will train for SpaceX's mission to Mars in Europe's poorest region? Or maybe he will have a rakia (or many more than one!) with the locals. The best one, by far, however, was that the founder of the e-vehicle company Tesla might find out that this word has a very different meaning in Bulgarian - an adze is the woodwork tool used to take out nails off planks - and hit people, if need be. In any case, even if the eccentric billionaire doesn't come (which is, of course, very likely), everybody here had a nice laugh at his expense.

So here's the thing about trains. They are a pain to build and hard to operate. They are very capital intensive, and they usually require a state to be involved.

Yet once they are built, they are the most cost effective, low-emission, convenient mass-transit system there is. Bulgaria has them. Meaning, it has railroads of some kind that criss-cross the country. This is a solid ground to work on. Yet we're not using it, intentionally or not.