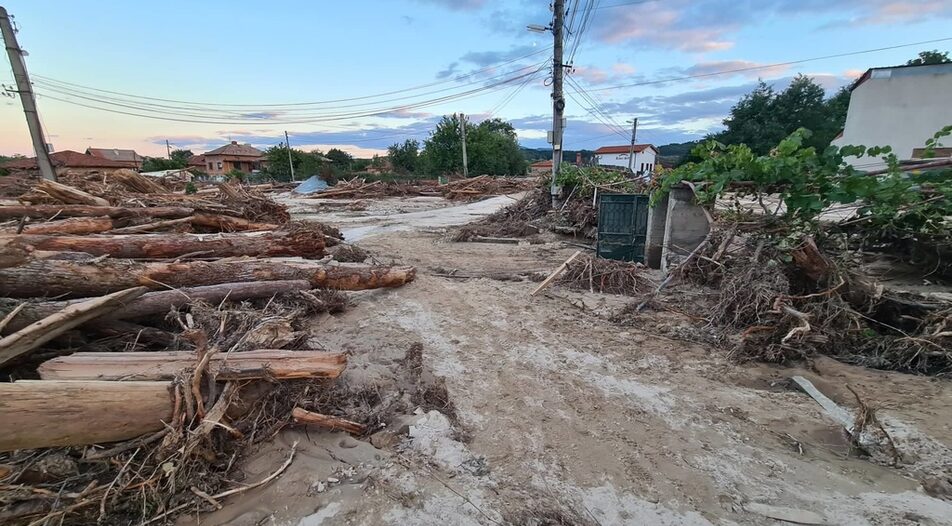 The week: water, migration, elections and a new King of Britain

The week: water, migration, elections and a new King of Britain

The river running through Karavelovo ran dry just a couple of weeks ago. It's a small stream, not really a river. Yet it overflowed in a day, together with another small river just above the tiny village in Karlovo province, central Bulgaria. After almost 200 liters of rain per square meter over several hours, the two small streams burst their banks and rushed to join forces with their bigger sister - Stryama river, a kilometer or so away. Tragically, they passed over Karavelovo and the next village - Bogdan.

When I say "passed over", they literally submerged the two villages and left them decimated. Hundreds of families were left stranded, homeless or with only partially inhabitable houses. Roads were torn apart, cars were thrown around, bridges crumbled. Where there was once a village, now there is only mud.

However prepared you think you are for natural disasters, a moving wall of water, several meters high, is not an easy thing to stop.

And Karavelovo was not unprepared

Judging from the satellite images and from institutional signals, there wasn't an overwhelming logging going on in the forests above - a problem in many other places. Riverbeds were supposedly taken care of in the past several years.

And yet several hours of rain was all it took to wash away a huge part of everyday life there.

From what I can tell, walking around Karavelovo and speaking to people and institutions, there isn't a single entity to blame. Infrastructure was, of course, crumbling, as it is everywhere after decades of neglect. There was complete chaos in coordinating all the various activities in the water management (as throughout the country), and there are probably illegal activities going on in the forests above. Yet all of that was not excessive - it was at a tolerable level, as locals would have it. There is severe corruption that robs your daily life and then there is corruption you can live with. Except, that is, when a wall of water cascades down a hill.

Which begs the question: how are we, as a country, going to cope with climate change? What if, as one local asked while cleaning his house from mud, it rains for more than a day?

If this was a newsletter addressing Bulgarian authorities, I would urge them to finally coordinate and bring under one roof all the various institutions, dealing with water. Water is the vital resource of the future, more important than oil and more dangerous than gas.

But since this is not, here is some advice for you, whether you are an investor, an expat living somewhere in the villages, a consultant for a company here or anywhere else. Take a walk. Check your local riverbeds. It's usually a nice walk and shouldn't take more than a couple of hours. Note any problems and mark them down. If the situation is fixable - fix it. If it needs more people - organize and do it on a weekend. If it requires more - petition your municipality to do it. If it needs money, spread the word and tell other neighbors about it. Spending a hundred leva today is better than waiting on state aid later.

Trust me, I've visited Karavelovo. You'd want to do that before the next downpour comes.

The floods in Karlovo region coincided with the start of the political campaign, triggering reactions from politicians of various colors, including WCC's leader Kiril Petkov and the former Parliament head Nikola Minchev, one of the most well-known Democratic Bulgaria MPs Elisaveta Belobradova, and lower-key GERB figures from the region. Many of them came to help dig out homes from the mud. And their PRs followed suit to take pictures. Yet the real heroes were tens of volunteers who came to dig without seeking political gain.

Yes, they are still coming, believe it or not. Not many people seem to care, judging from the fall in voting applications from abroad. This augurs for a lower turnout than in previous elections.

Yes, GERB is ahead, again

We Continue the Change and BSP have suffered the greatest damage from the caretaker cabinet's actions, claims a survey published by Alpha Research agency. WCC, the first party to beat GERB in more than a decade, is now 6% behind.

It's still here, though. After a couple of policemen were killed by a 15-year old Syrian driving a bus full of migrants in Burgas, there has been an upsurge in police activity across the country to catch migrants. Since the traffic of people never actually stopped, just went under the radar, there is now a bit of soul-searching done on the police part. At least 10 border police officers who took part in the illegal smuggling rings will be punished, said the minister of the Interior this week. There are others involved but since there is "data, but not enough proof", they will simply be shifted around the country.

Who invited Mitrofanova to Unification day?

The Russian ambassador-in-chief is still around, embarrassing the political class here. This time in Plovdiv which welcomed high-level guests to celebrate 6 September, Bulgaria's Unification day. One of these guests turned out to be the said Russian Ambassador, Eleonora Mitrofanova, invited by Plovdiv's mayor, Zdravko Dimitrov (GERB). Ms Mitrofanova's appearance was a surprise, as she hasn't really appeared in public that often since half of her diplomatic contingent got expelled over spying allegations in the last days of the Petkov cabinet.

First, her standing next to various Bulgarian politicians at an official ceremony does not look great at this particular time. Second, her country opposed Bulgaria's unification in 1885 - so much so, it pushed Serbia to wage a war on Sofia. Not a great guest, I guess.

Our new report is out and is live for subscribers. You can also download it from our website (it costs 30 euro and we fixed the broken link, thanks for the tip-off). It is by far the deepest and broadest overview of the situation in Sofia and other big cities. It can help your decisions in quite a volatile market.

Sofia has now been overtaken by countries such as Serbia, Montenegro and Georgia and is the only EU country not to find a place among the world's most developed countries. The UN Human Development Index, which has been tracked since 1990 to measure other characteristics of well-being, takes into account factors such as life expectancy, access to education and personal income as a measure of quality of life, in addition to economic growth.

So Lukoil is still the only game in town

The government wants permission from Brussels to keep on buying from the Russian-owned petrol refinery, even though there is an ongoing EU-wide restriction on making procurement with Russian companies. That's easily explainable: Lukoil is still the main supplier for most of the petrol-stations in the country. The Finance Ministry wants to keep on buying from there at least until 2024.

4% Is the actual growth of GDP in the first quarter, which is a 0.8% revision from the express data. 3-20 thousand levs
Is the subsidy SME's can get for cybersecurity solutions. The subsidy is part of the National recovery and resilience plan and companies can apply in October.

Apparel Remix Global The Sofia-based company for second-hand clothes is investing 20 million levs (10 million euros) in a new logistics center in Ravno pole. It comes a year after Remix was made part of thredUP - the American online platform.

Record-breaking revenues
The state-owned coal plant Maritza-iztok 2 has registered over 330 million levs in profit for the first 6 months - the highest ever. It's a normal effect of a record-breaking year in terms of energy prices. The coal plant which was saved by state subsidies just a year ago, registered over 1.7 billion levs in revenues - an almost 10-fold increase. In the meantime, the transit operator - Bulgartransgas - registers 115 million levs in profit, although deliveries and consumption are down.

King Charles III - unlike his mother, the late Queen Elizabeth, the new King of Britain has been to Bulgaria twice. He was first here in 1998 and then in 2003, when prime minister was his cousin - the ex-Bulgarian king Saxe Coburg Gotha.

The Archbishop of Plovdiv Nikolay has long been one of the most colorful and conspicuous members of the Bulgarian Orthodox clergy. This week, public attention turned back to him when he called Western-educated young Bulgarians "instruments of evil" for their "contempt for their native land and people, disrespect for parents, extreme individualism, materialism and selfishness" that they have acquired while studying there. While this is a long-standing strand in Father Nikolay's sermons, saying that in his Unification day speech didn't produce good headlines. Especially coming from a priest, known for his penchant for luxurious limousines, his friendships with high-ranking politicians of various colors, and whose nickname is "Rolex" in a nod to his preferred brand of watches.

The river running through Karavelovo ran dry just a couple of weeks ago. It's a small stream, not really a river. Yet it overflowed in a day, together with another small river just above the tiny village in Karlovo province, central Bulgaria. After almost 200 liters of rain per square meter over several hours, the two small streams burst their banks and rushed to join forces with their bigger sister - Stryama river, a kilometer or so away. Tragically, they passed over Karavelovo and the next village - Bogdan.

When I say "passed over", they literally submerged the two villages and left them decimated. Hundreds of families were left stranded, homeless or with only partially inhabitable houses. Roads were torn apart, cars were thrown around, bridges crumbled. Where there was once a village, now there is only mud.