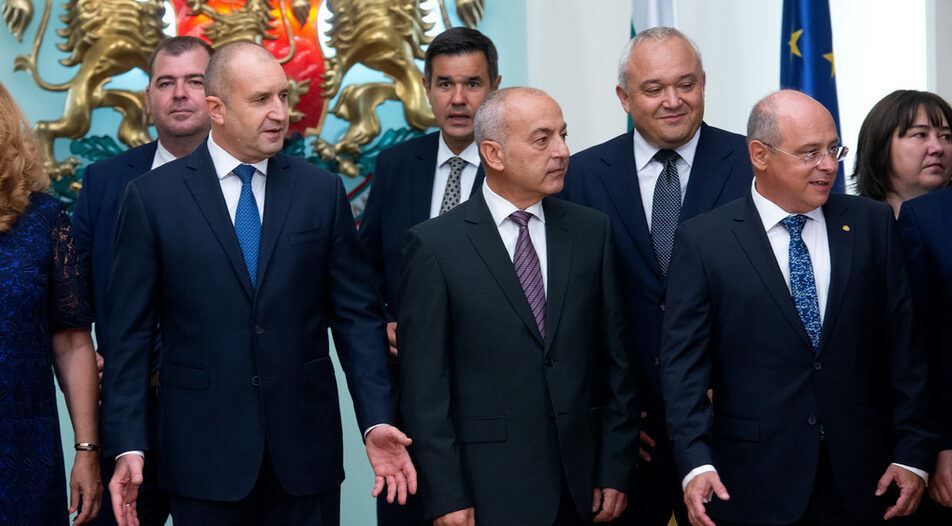 Returning to Gazprom's deliveries, however, has many risks that should be carefully assessed by President Rumen Radev (left) and PM Galab Donev (center)

On its second day in office, the new Bulgarian cabinet announced a course towards "containment of the chaos and destruction" in the energy sector. This might well translate as a pivot to Moscow

Returning to Gazprom's deliveries, however, has many risks that should be carefully assessed by President Rumen Radev (left) and PM Galab Donev (center)

Is Bulgaria heading towards an energy apocalypse this winter? If you ask the caretaker cabinet of Prime Minister Galab Donev, as well as its political mentor, President Rumen Radev, and members of the business community, the answer is unequivocally "yes."

The situation is apparently so bad that, on Wednesday evening, the Prime Minister convened a press conference (with no questions allowed), where he announced the creation of a special crisis committee that will deal with the "chaos and destruction" in the energy sector apparently bequeathed by the cabinet of former Prime Minister Kiril Petkov.

At the press conference, Mr Hristov described the situation in the sector as "serious, almost critical" and claimed that the seven tankers of American LNG allegedly agreed by Kiril Petkov in the last days of his cabinet were not set in stone and Bulgaria's needs for the winter remain.

Is the situation really that bad?

This doom scenario is quite exaggerated - to say the least. First of all, there is gas in the region and the issue is rather to find ways to deliver it to Bulgaria. Second - the country uses relatively little natural gas and therefore it is not of critical importance for the economy - 30 percent of total consumption is accounted for only by the Sofia Central Heating company (and, in case of extreme need, fuel oil can be used as substitute for gas), and only a negligible percentage of households relies directly on gas (they can switch to electricity, which is much cheaper anyway).

And third - most large plants like Lukoil Neftochim, fertilizer plants and glass factories have long been self-sufficient - whether through their own imports (the market is open and anyone can buy and supply from wherever they want) or alternative fuels like ammonia. Former Energy Minister Alexander Nikolov even hinted that the caretaker cabinet plans to sabotage the deliveries of the already agreed LNG supplies.

There have been no problems with gas delivery in the four months since the Russian company Gazprom halted its deliveries, the Chiren gas storage facility is filling up and there are LNG deliveries secured for the winter.

Yet the rhetoric of crisis and urgency might have a different purpose - it provides the pretext for an otherwise difficult 180-degree turn towards a policy of appeasement with Gazprom (and Russia as a whole).

Although no person in a position of authority has officially demanded it, the President's words, the comments of his appointed government and the calls of a number of other public figures have been interpreted precisely as a prelude towards the restoration of supplies from the Russian giant.

Moreover, Capital weekly sources claimed that the new energy minister, Rossen Hristov, has lived and worked in Russia for eight years, has business partnerships with Russian nationals and almost no experience in the energy sector itself. And the head of his political cabinet is Mr former Radev's energy adviser, Lyubomira Gancheva, who is a former deputy chairwoman of the openly pro-Russian ABV party, launched with the help of the most notorious lobbyist of Russian grand energy projects in Bulgaria - former President Georgi Parvanov.

Against this backdrop, it is very likely that in a few days the new crisis committee will come up with a proposal to do everything possible to resume supplies from Gazprom. Since the intention of Energy Minister Hristov to launch a tender for LNG contradicts his own words that the tankers agreed for by the Petkov cabinet have nowhere to unload, rapprochement with the Russian company remains the sole viable option.

Such a scenario, however, has many risks that should be carefully assessed by President Radev and his allies.

What are the risks of the return of Russian gas?

If Bulgaria resumes paying Gazprom in line with the terms of Vladimir Putin's decree of March 31 (through two accounts in Gazprombank - one in dollars, the other in roubles), it will actually lose all the trump cards in the face of a possible arbitration with the Russian company over the suspended supplies and the "take or pay" clause.

There will simply be no way for the state to justify its claims that it was unable to pay over the past three or four months - after all, that has been Sofia's official position so far. Roughly, this could cost at least 300-400 million levs.

Such a move will also have long-term consequences, as it will be harder to secure a multi-year contract for LNG supplies. What's more, if a new contract with Gazprom is reached, and rumor has it that the caretaker government may already be working on it, an LNG option disappears completely.

That's not all - the return of Gazprom may result in a loss of credibility in front of Sofia's Western partners, who now provide liquefied gas to Bulgaria. This means that there will be a real risk of being left without an alternative to Russian supplies right in the middle of the winter. And the Kremlin has already shown that it can stop the gas of even those who pay under the rouble conversion scheme. Without an alternative, Bulgaria will this time be doomed by its own lack of preparedness.

The political cost would also be high - Bulgaria's tilt towards Russia could hamper the allocation of EU funds under the recovery plan and operational programs by the end of this year.

The changing political landscape must also be taken into account. After the elections in early October, there could be a new pro-Western government that will be constrained by the caretaker cabinet if Gazprom is brought back into play before then. With a new, say, 10-year contract with the Russian company, Bulgaria could effectively become a captive of Moscow once again, with all efforts for diversification of supplies that were among the biggest successes of Mr Petkov and his team - sinking in vain.

Is Bulgaria heading towards an energy apocalypse this winter? If you ask the caretaker cabinet of Prime Minister Galab Donev, as well as its political mentor, President Rumen Radev, and members of the business community, the answer is unequivocally "yes."

The situation is apparently so bad that, on Wednesday evening, the Prime Minister convened a press conference (with no questions allowed), where he announced the creation of a special crisis committee that will deal with the "chaos and destruction" in the energy sector apparently bequeathed by the cabinet of former Prime Minister Kiril Petkov.