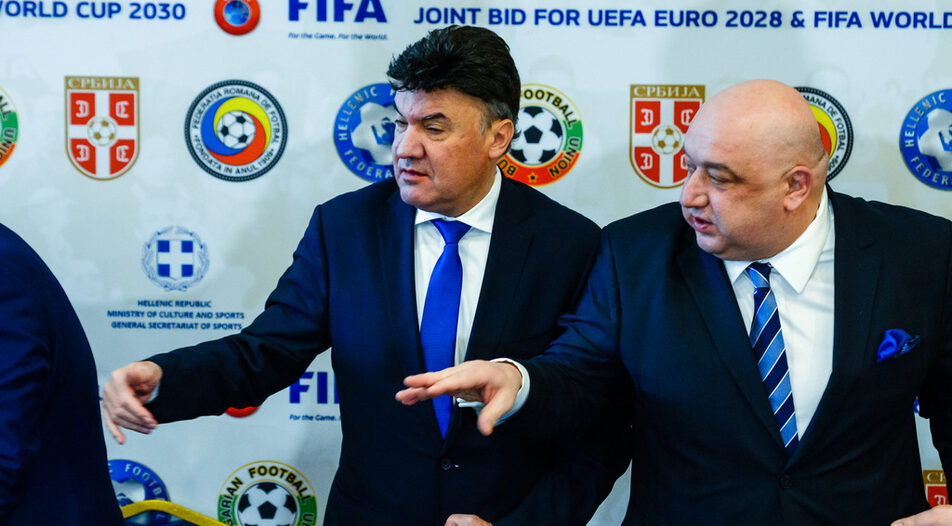 "Bulgaria's football is dead,'' several legends of the game proclaimed after recent shameful performances from the national team. Out of their last 17 matches, the team has won only 3, while most of those were friendlies and rarely against world class opposition. Even if someone says it was not fixed, the truth is that the 2:5 loss against Georgia four days ago was not surprising at all. Bulgarian football has long been tainted by corruption and dirty money, becoming a mere political plaything in the hands of former prime minister Boyko Borisov.

In addition, most supporters do not attend national games anymore, hence the game against Georgia (and the one against North Macedonia) was moved to the small town of Razgrad, home of the club team PFC Ludogorets Razgrad. Ludogorets is actually one of the few fairly successful football projects of the last 20 years, led by oligarch Kiril Domuschiev whose political connections and influence over the football union have helped the club achieve success and recognition.

Bulgaria's professional football championship has long been linked to match-fixing. Rumors about PFC Slavia Sofia and many others have circulated in the media for years. No one has ever addressed the issue, while those in charge in the BFU have conveniently not prosecuted anyone. Bulgarian football has become irrelevant, so big betting companies have limited their betting options on the game.

Not that long ago, legendary Bulgarian footballer Hristo Stoichkov, when asked what needs to change in national football, said: "Maybe we have to change Borislav Mihailov's haircut" (The leader of the Bulgarian Football Union (BFU) is famous for his hair-transplant). The former striker's words were aimed at the management of the Bulgarian Football Union (BFU) and its leader. Sadly, Stoichkov's comments, dating back almost a decade, have not ushered in any changes at all. Both Kiril Domuschiev and Mihailov have been close allies over this period in the BFU which has supported PFC Ludogorets, while the mogul Domuschiev has given carte blanche to enable the most shameful events in Bulgarian football.

To make matters even worse, the ranking of the national team in the big championship remains atrocious, and attempts to remove Mihailov from the presidency of the football union have been in vain. In recent months, the opposition has been led by the most famous Bulgarian ex-footballer Dimitar Berbatov. However, the struggle for power has led to complicated court cases, and all under Mihailov's continued stewardship.

Against this background, the besieged Mihailov faced a new challenge - allegations that he spent 2011 New Years Eve in Singapore alongside the "brain" of the Asian football mafia Tan Seet Eng (also known as Dan Tan). The investigative journalism site Bird backed up its thesis with a photo dated from December 31, 2010, showing Mihailov, Dan Tan and former PFC Belasitsa president Kostadin Hadjiivanov, nicknamed Kotse Matsa (another person with suspicious football upbringing). Kotse Matsa was famously arrested on the Bulgarian-Greek border years ago for illegal cigarette trafficking (in the company of former MP - and now BFU member Kamen Kostadinov).

Mihailov greeted the publication by branding it a "malicious report" and demanded more attention be paid to the rejuvenated national team which was about to play important games. However, the same team lost shamefully against Georgia, conceding 5 goals a couple of days later. This triggered widespread calls for resignations. However, the person who quit was national coach Yassen Petrov, not anyone from the management.

Four goals from four penalties in front of a handful of spectators. This was the result of a friendly match with Estonia on February 9, 2011. The match was played on the field of Mardan Stadium in Antalya in Turkey. Estonia's captain Konstantin Vasiliev twice gave his team the lead, and Ivelin Popov equalized twice. Sadly, those two players never gave any evidence to support the match-fixing allegations. Ivelin Popov left the national team some years later after a scandal involving Borislav Mihailov and his sidekick Yordan Lechkov.

The match was full of questionable events and triggered an investigation. In early 2012, FIFA officially declared it had been fixed and canceled the result. The blame was put on Hungarian referee Kolos Lengiel, who was handed a life ban from football, and on the company that organized the game, Footy International Media.

FIFA's conclusion was that the match was organized to win bets, not for purely sporting reasons. According to Stern magazine, bets totaling 5m euros were placed on the match by the "betting mafia".

The head of FIFA's anti-corruption department at the time, Chris Eaton, said at the time that each of the teams received 20,000 euros, as well as accommodation in a five-star hotel and plane tickets for a group of 30 people, which also cost 20,000 euros. The same goes for the friendly between Latvia and Bolivia, which ended 2:1, and which saw all three goals being scored from penalties. The match, played a few hours earlier, was organized by the same company and refereed by the same official.

A 2011 quote in Hungary's newspaper Blick indicated that Lengiel initially denied involvement in the match-fixing. "We were invited to the youth matches, but three hours before the start we were told that we should referee for Bulgaria - Estonia. We made a mistake because we did not inform the Hungarian federation, and we will take responsibility for it. If you look at the recording, you will see that the four penalties are the right decisions. The players accepted them without protest, and after the match they thanked us for our work," Lengiel said at the time. However, a Hungarian journalist told Kapital weekly (Kinsights) that Lengiel subsequently confessed his guilt.

Is there smoke without fire?

In the months following the match, Mihailov and the Bulgarian Football Union were repeatedly asked many questions. Doubts were fueled by then-Bulgaria coach Lothar Matheus, Stoichkov and lawyer Georgi Gradev, who is currently part of the opposition and is among the most active figures bidding to oust Mihailov.

"I do not want to spread rumors, so I will ask simple questions. Did Borislav Mihailov get together with the manager Lacho Tanev on New Year's Eve in Singapore? Did he meet there with the arrested Raj (Wilson Raj Perumal, detained for participating in match-fixing) ) and Kotse Matza, with whom he is friends? Did he receive 80,000 euros from Raj and for what?" Gradev asked in April 2012.

At the time, Hristo Stoichkov, who was still working in Bulgaria (then as a coach of Litex), addressed the president of the Bulgarian Football Union. "The first question is very simple - whether he as president has participated in fixing the results of the national team? The second question - whether he participated in fixing schemes of the Bulgarian football championship?" Stoichkov told TV7.

Mihailov railed against his former teammate in the national team (They played together in the glorious team that reached the semi finals of the 1994 World Cup). "Everyone can talk, he (Stoichkov) was mad and spoke emotionally. I did not participate in fixing matches of the national team, or at any level. Nothing was wrong in the game with Estonia; only some referees were caught awarding suspicious penalties. I will not go back to old things, they are long gone."

In October 2012, the Bulgarian Football Union responded to a passage in a book by Matheus in which he mentioned the match with Estonia. According to the quote, the coach thought it strange from the beginning that "President Mihailov had insisted on us playing this specific friendly match".

In 2012, another suspicious game involving Bulgaria's participation was allegedly fixed. One of the leaders of the South African Football Association said that the friendly match between the two teams (1: 1) was fixed by Asian bookmakers.

The Asian connection with the Bulgarian trail

"Who wants to watch a football match, the result of which is clear in advance? By the same logic, you can go and watch wrestling," said Ben Patterson of Sportradar in 2013, a company that analyzes betting movements at football matches to spot suspicious duels.

At the time, Europol announced that 380 questionable matches were being investigated in Europe and more than 700 worldwide including national teams.

All roads lead to Asia, and the claims and revelations are that the whole football mafia is run by a well-organized union in this part of the world. The names most commonly mentioned are Dan Tan and Wilson Raj Perumal. In his 2014 book, Kelong Kings, Perumal, who was serving time in Finland, talked about his methods and connections, as well as qualifying several teams to the World Cup and fixing Olympic matches.

There is also a "Bulgarian trace" through a person named Hadjiivanov, who is said to have a key role and influence in the Asian union. According to the book, he was responsible for "fishing" referees. In unraveling the big match-fixing scandal in Italy, one of the investigators said that "he (Hadjiivanov) is probably one of the six biggest figures" in Tan's union.

The photo of Mihailov published by "Bird", showing him with Dan Tan and Hadjiivanov, revived the memory of the fixed match and put the president of the Bulgarian Football Union in a very uncomfortable position. The same happened during the match with Georgia in which he left in the 20th minute after Bulgaria had conceded two goals.

In the meantime, Berbatov and his supporters are trying to hammer home their advantage by pressing their case against Mihailov and interrogating him about his presence in Singapore - and other issues. So it is that the four-penalties match and the mystery surrounding it are again all part of the seemingly endless shameful saga of the Bulgarian Football Union.

"Bulgaria's football is dead,'' several legends of the game proclaimed after recent shameful performances from the national team. Out of their last 17 matches, the team has won only 3, while most of those were friendlies and rarely against world class opposition. Even if someone says it was not fixed, the truth is that the 2:5 loss against Georgia four days ago was not surprising at all. Bulgarian football has long been tainted by corruption and dirty money, becoming a mere political plaything in the hands of former prime minister Boyko Borisov.

In addition, most supporters do not attend national games anymore, hence the game against Georgia (and the one against North Macedonia) was moved to the small town of Razgrad, home of the club team PFC Ludogorets Razgrad. Ludogorets is actually one of the few fairly successful football projects of the last 20 years, led by oligarch Kiril Domuschiev whose political connections and influence over the football union have helped the club achieve success and recognition.